ello and welcome back to the Lab of all things Johnnyness! Now that Magic 2011 has completely settled in your consciousness, let's go ahead and build some sweet decks! I've got the craving for some good old-fashioned synergy, and today it comes in two steaming dishes. If I were a restaurant, I'd be called Red Labster.

Recovered yet? I know, that was an especially numbing pun, but I'm ordering you to forget about it. I'm getting all authoritarian because the three Magic 2011 cards I'm speaking of today are all authority figures of some sort. Garruk's Packleader is just that, the leader of the Wildspeaker's beastly pack. Two of the flagship Titans, Inferno Titan and Sun Titan, make a giant appearance later on.

Leader of the Pack of the Speaker of the Wild

That's technically Garruk's Packleader's full title, since authority figures commonly have fancy titles to flaunt at moment's notice. So when your opponent notices you drawing a ton of cards and beating you down at the same time, be sure to name-check the guy that made it happen. Draw out each syllable. I'd love to see Oona's Gatewarden or Jhoira's Timebug be introduced in this way. "All hail the Warden of the Gate of Oona, Queen of the Fae! Get ye withered!" 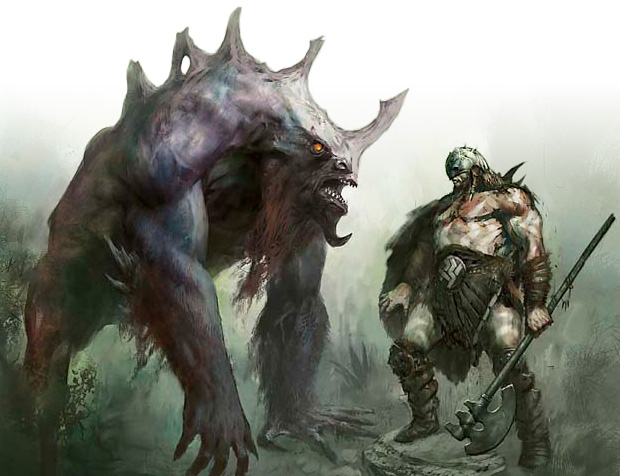 Alright, let's build some Packleading decks! As I alluded to in my column last week, I'm itching to throw Kavu Lair into the mix. The combination of the two green cards turns any cast creature with power 4 or greater into two extra cards. Garruk's Companion is already a better Elvish Visionary alongside its Packleader, but Kavu Lair just makes things that much crazier.

The first creatures that I looked for were mildly expensive (say, a converted mana cost of 4 or 5 or so) and had a Gaea's Anthem sort of effect. I found some perfect candidates in Boartusk Liege and Wilt-Leaf Liege. This trait was important to me because I wanted my little mana creatures (such as Llanowar Elves and Arbor Elf) to eventually have a power of 3 or 4, so they would become a lot better in the late game. Joraga Warcaller was another perfect card: multikicking it only twice would not only qualify the Warcaller for Packleader productivity, but the other 1 power mana Elves as well. I also love a singleton of little-used Tolsimir Wolfblood here. This Elf provides a global pump effect as well as a free card-drawing 4/4 threat in Tolsimir Wolfblood. 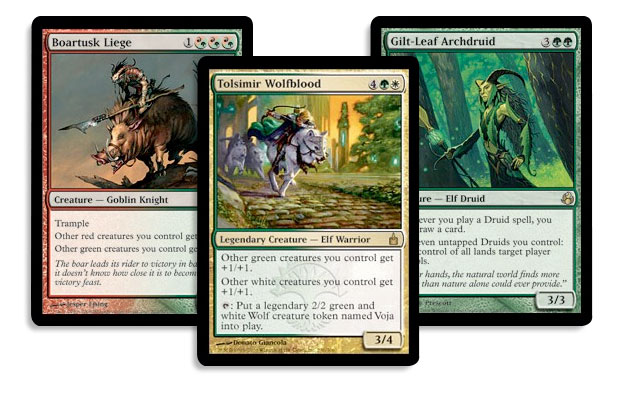 What's my win condition? Other than beating down and drawing cards (which is extremely fun), I went with Gilt-Leaf Archdruid. Whoa! Now there are three possible card-drawers in the deck, and getting them all out results in craziness. Gaining control of all your opponents land seems like a pretty good way to ensure a victory as well.

There are some fun singletons in there, from the bombastic Khalni Hydra to Garruk Wildspeaker himself! Have fun with this one.

When I first learned of the exciting Titans cycle in Magic 2011, I was pumped and couldn't wait to play around with the massive creatures. I'm sure I can guess how the idea for the "Titan/Giant" template came about. Since it's Magic 2011, someone obviously traveled forward in time and saw the apparently epic 2011 Super Bowl between the Titans and the Giants. Then, they traveled back, creating this timeline in which the cycle exists. Unless, of course, time turns out to be immutable and Vince Young and Eli Manning really do wind up facing off.

Wow, I'm apparently immutable as well. Let's get back to the Titans. I played around with the blue and green members (Frost Titan and Primeval Titan) alongside Renegade Doppelganger a couple weeks ago. Now it's time to use the red and white members, Inferno Titan and Sun Titan. I went with these two, and not Grave Titan (yet ... wait a couple of weeks, folks) because I realized that all these Titans were actually Giants. I wondered how I'd fit these two Giants into the red-white tribal theme that Lorwyn introduced. 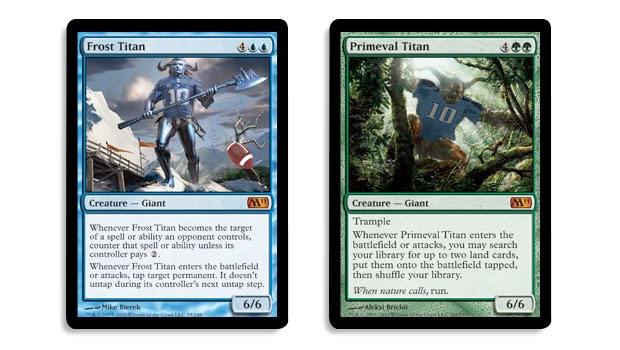 Lorwyn brings some great helpers in Stinkdrinker Daredevil and Giant Harbinger, as well as an unexpected one in Inner-Flame Acolyte. Evoke it in the early game, then cast Sun Titan. You'll return it and give the Sun Titan haste, letting you return something else upon its attack. If you sacrifice the Acolyte in response (to, say a Hearthcage Giant!!!) you'll get to bring it back again!

The Titans love attacking, so I naturally decided to give them more combat phases. The latest card to pull off this trick is the rebounding World at War, which lets you pull insane Titan tricks for two consecutive turns.

I was looking for some fun permanents to return with Sun Titan, and I found Promise of Bunrei. One evoking Acolyte will activate the Promise, providing you with four 1/1 Spirits. Later on, Sun Titan brings it back for more Promising potential. Solitary Confinement is another fun one. Feel free to sacrifice it during your upkeep, so you can draw during your draw step, and return it to the battlefield on a Sun Titan attack. Basically, it's only around on your opponent's turn, which is a recipe for immortality. Lorwyn provides Moonglove Extract (recurring Shock for the win) while Bottle Gnomes interacts well with Promise of Bunrei.

Seething Pathblazer is an Elemental that can sacrifice other Elementals: perfect for getting Acolytes and Longhorn Firebeasts into the graveyard. The Elemental Ox Beasts (yeah, really) are a long-lost piece of casual tech that can cause some grief when sacrificed and returned over and over. 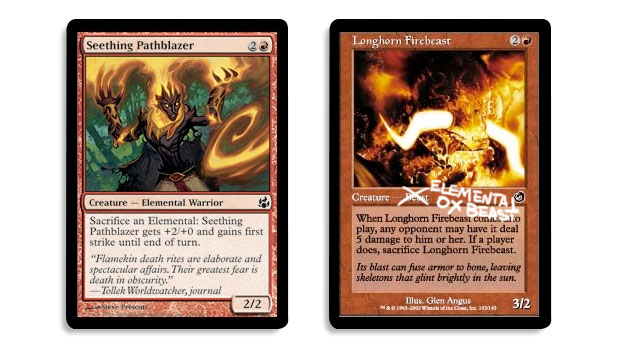 Overall, this is a fun Giant/Elemental deck that focuses on Sun Titan. Inferno Titan doesn't need too much help to be broken, but a single World at War could be the nail in the coffin. And since Infernos and Suns are both objects of high temperature, I dub the deck ...