o many Lab blueprints! They've flooded my mind, body, and traditional welcome sentence. Hmm... if those three were sinking, I probably wouldn't save the last one. It's so dull to fit into the formula each time. I might shake things up a bit here and there, you know. Like for instance today's column.

Due to the unprecedented Magic: The Gathering Commander squished in between the radical New Phyrexia and the latest core set, there's an abundance of cool new effects out there. Usually I'd pick one release and stick to that for one article, but this week I think I'll open it up to all three. A mixed bag of goodies, perhaps. We've got some decks left over from New Phyrexia, a deck based on an interesting Magic 2012 card, and my first stab at a Commander deck of my own.

I might as well start off with that last one. A couple people seemed miffed that I didn't build actual Commander decks during Commander Week. I see how that would make sense, but still I opted to build 60-card decks as usual. Secretly though, in my Real Life chamber, I was playing around with the Political Puppets deck with fellow Magicians. After some fun times with the deck, I decided to rebuild the deck from the ground up, with some of my stylistic touches. 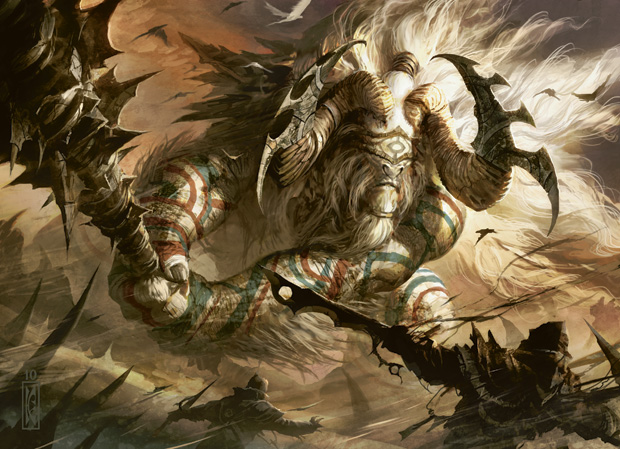 For my Commander I went with Ruhan of the Fomori, who ushered in a hefty Giant subtheme. Lots of Giant cards actually excel in multiplayer, examples being Hamletback Goliath and Taurean Mauler (lots of +1/+1 counters) and various board-clearing big guys (like Hammerfist Giant, Bloodfire Colossus, Desolation Giant, and Thundercloud Shaman). Some other Giants provide the much required wacky factor in multiplayer, examples being Arbiter of Knollridge, Favor of the Mighty, and Boldwyr Heavyweights (which is tasty when followed up with a board clearer!).

Here's my first stab at this format:

The Giant theme is heavy on purpose; the fun part was finding single cards that meshed between them. Equipment for Stonehewer Giant, three- (or less) cost permanents for Sun Titan, and some splashy planeswalkers here and there.

There. That's my first try. Perhaps I'll tweak it as games go on and I notice things. If I build another Commander deck, I'd like to try Karrthus, Tyrant of Jund. Seems to me there's lots o' Dragons on these Commander battlefields. And Karrthus follows up Death by Dragons nicely.

There's an idea that's been nibbling at me for a while. The Chancellor cycle from New Phyrexia intrigued me from the get go. Like the Leyline cycle of Magic 2011 / Guildpact, these cards have an effect on the board before the game has even begun, before the slightest land has filled the infinite void. 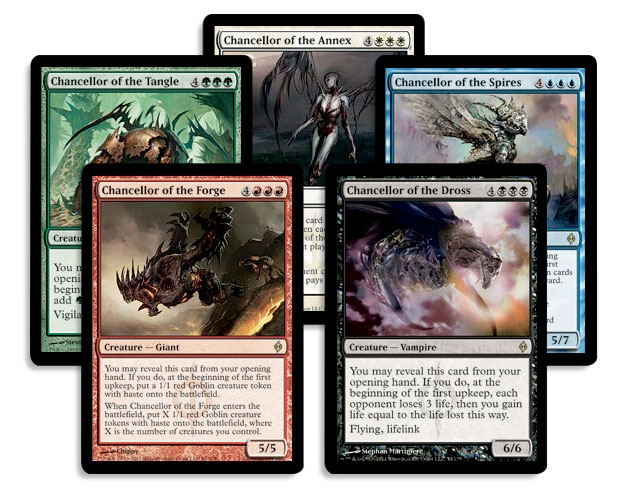 With nine Leylines and five Chancellors now in existence, it wasn't long before mad mailbox mainstay Darth Parallax came up with a wacky deck list for them. It's very avant-garde; more than half the deck is made up of Chancellors and Leylines. The goal, quite obviously, is to have your opening hand explode like fireworks. "Oh, before we start... mill seven, I get a 1/1 Goblin token, and you can't counter my creature spells." I'd be grinning from ear to ear, and that's not even the god hand. 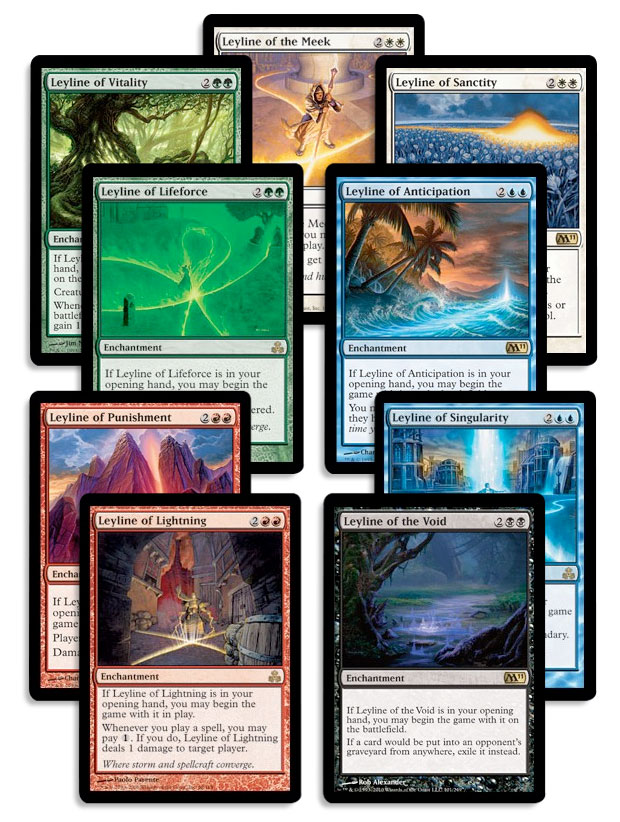 The god hand is to get lots of Chancellors of the Tangle in your opening hand, and spend that green mana on Elvish Piper or (easier) Fauna Shaman, which can find Elvish Piper. Hypergenesis is another option. Once you start Piping creatures out, you can swarm with your Chancellors. 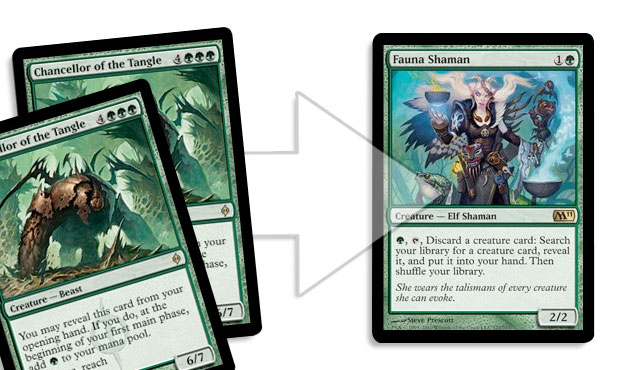 Since I have lots of permanents of different colors in the deck, I decided to add two copies of Bloom Tender to the deck. It's fetchable with Fauna Shaman and can really ramp things up manawise.

3 Chancellor of the Annex 3 Leyline of Sanctity

3 Chancellor of the Spires 2 Leyline of Anticipation

3 Chancellor of the Dross 2 Leyline of the Void

4 Chancellor of the Forge 3 Leyline of Punishment

2 Leyline of the Void

And now to twist one section into another without a headline: Another New Phyrexia card that I hadn't gotten around to using was Xenograft. The color-shifted (and color-corrected) Conspiracy has been doing well for itself, being used in many green Ally decks featuring Turntimber Ranger for infinite Wolf Ally tokens. I adore this combo and would have even made a deck around it for the column... except that I never got around to it.

However, I have come up with a new way to use Xenograft. A very new way. So new, it could have only come from Magic 2012. Specifically, the very first Spider lord, Arachnus Spinner. 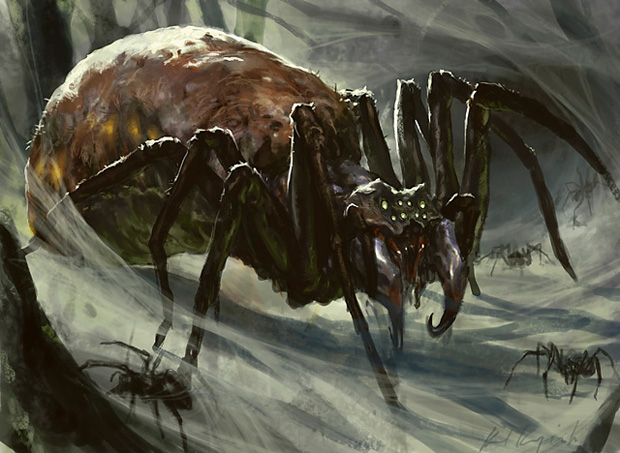 How could these two possibly be connected? Well, it's not a stretch to suggest naming Spiders with Xenograft. That way, any creature you tap will fetch an Arachnus Web. What's vital here is that the Web doesn't have to be in the library; it can also be in the graveyard. 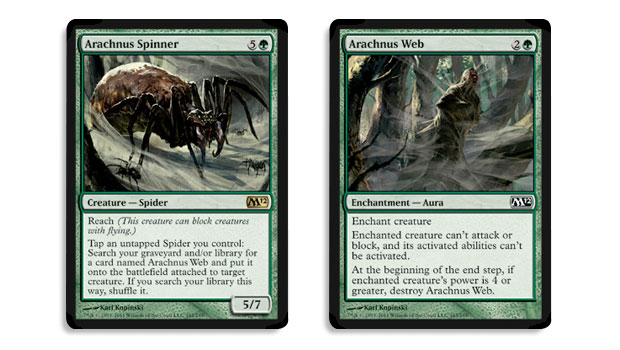 So let's say we have a Web in the graveyard and the tag-team of Xenograft and Arachnus Spinner out. Tap a Spider to return Arachnus Web to the battlefield. What to enchant?

How about Bramble Elemental, a funny little card from the classic Ravnica set? Whenever it has an Aura attached to it for any reason, it produces two Saproling 1/1 tokens. Cute.

Except... they're not just Saprolings. They're also Spiders. And they can be tapped with the big bad Spinner. Hmm, if only we had a way to jettison the Web, so we could go infinite with Spider Saprolings (a new sensation, for me at least). Gatherer of Graces can sacrifice Auras (and she's not too shabby in an Aura-focused deck), so there we have it.

To recap: Have Xenograft and Arachnus Spinner out, along with Bramble Elemental and Gatherer of Graces. Tap a Spider to find Arachnus Web and attach it to Bramble Elemental. Make two 1/1 Spider Saprolings. Sacrifice the Web to the Gatherer. Repeat, using one of the new tokens each time. This works because of Arachnus Spinner's wording, which dodges the tokens' summoning sickness. Eventually you'll wind up with infinite 1/1 tokens. Do this all at the end of your opponent's turn to swing for the win next turn!

Xenograft has lots of function in this deck. Name Spiders for Arachnus Spinner. Name Saprolings for Utopia Mycon. Name Insect, Rat, or Squirrel for Swarmyard (although it might as well be Spider). Arachnus Web and Deadly Recluse should slow down your opponent while you build for the combo. Fists of Ironwood is both an Aura and a token-maker. 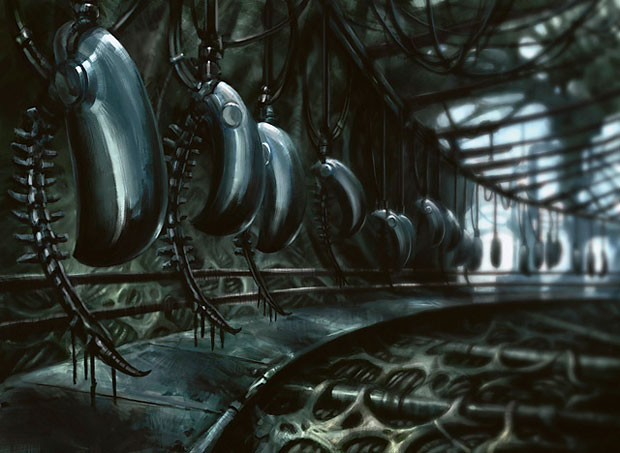 Today's last deck is another blue green deck that makes use of Utopia Mycon, alongside another interesting green Magic 2012 card. This means I can skirt another headline. Feeling abstract today.

Seriously though, this Mage cycle is freaking me out. Jade Mage can make a Saproling repeatedly for

. This is pretty silly when activated on Training Grounds, as only

will be required. Sacrifice the Saproling you just made to the Mycon for

, and you can go infinite, making and breaking Saprolings for a while until you end your turn with a Fresh Meat. Infinite 3/3 Beasts at the end of your opponent's turn sounds like fun. 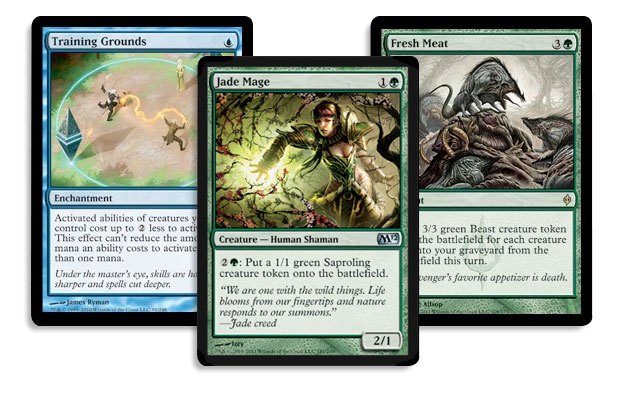 I added Azure Mage, Frontier Guide, and a Memnarch as other creatures for Training Grounds. Sprout Swarm and Scatter the Seeds offers some Saproling tokens, which can be turned into mana thanks to the Utopia Mycon.

Well that's all for today. Until next time!