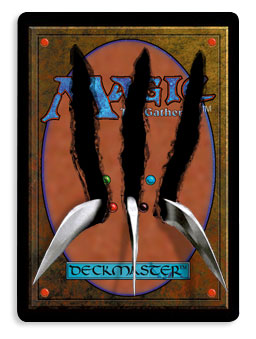 ello, Johnnies one and all, and welcome back to the Lab. I'm sure that many of you readers out there are anxiously awaiting today's article (just as I hope you do every week, of course) so I'm pleased to end all the dramatic built-up tension about this Magical contest of sorts. That is, after I talk about this week's theme, which, if you haven't been paying attention, is all about Origin Stories. So you've got a couple of paragraphs to go before I blow the lid off of this hopefully fun deck-building exercise.

Until then, I think I will plunge headfirst into this interesting theme, just as I try to do every other week. Hmm ... Origin Stories. I suppose it's vague enough that I could talk about anything to do with either "origins" or "stories." (Preferably both.) How about the riveting story of myself seeing X-Men Origins: Wolverine in theaters? First, I paid for my ticket, and then I bought a large popcorn. Then I walked down the aisle and (this is the exciting part) sat in a seat. Finally, I watched two hours of badass mutant action scenes, and then I left to go home.

Wasn't that a good origin story? Oh wait, they have to be about Magic, my bad. I can do that. In my very first article on a permanent basis, I gave a quick synopsis of my Magic origins, documenting my early love of red, Nightmare, and combos. There's really not much I could add to that quick summary, but this is Origin Stories Week, so I'll give a little more detail in the form of that beloved literary device, rhetorical questions. 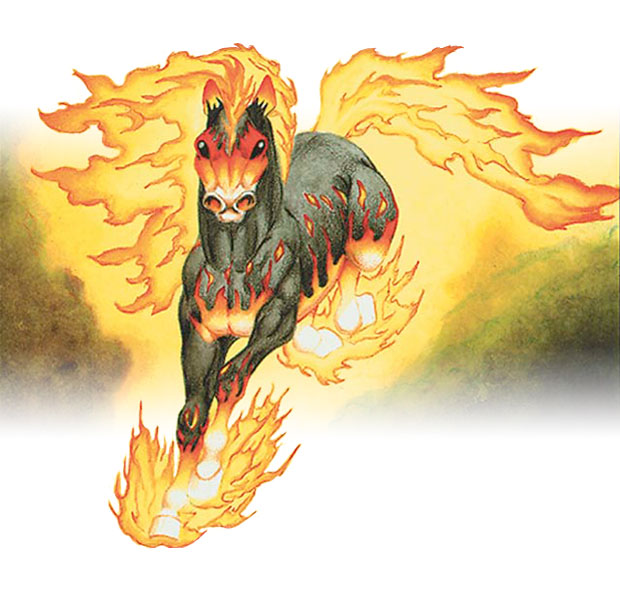 Question: What was your first experience with Magic?

Answer: As I've said, I had noticed some cards being slung to and fro on a tabletop some years ago at a summer camp. I slowly got myself involved, and swung for my first win with a stupendously cool Volcanic Dragon.

Question: What was in your first booster pack that you can remember?

Answer: As far as I can remember, the first booster pack I ever cracked bore the Nemesis moniker. I had already discovered my love of red, so my eyes went right past the Kill Switch, stopped momentarily on the shiny Infiltrate, and settled on Rupture. 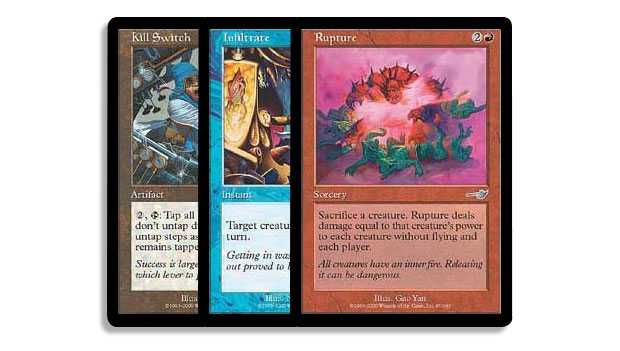 Answer: The list was incredibly bad. If I typed it out, I believe the words would instantly disintegrate in my computer. Fortunately, I can't remember the exact card for card deck, but I recall the basics of it. I basically threw every card I had together, and my centerpiece was a Nightmare; despite having only four Swamps, I won lots of games with it. However, Nightmare in a multicolored deck is never a great plan. It had Netter en-Dal and Creature Bond (seen nowadays as Banewasp Affliction) to stall, and Power Sinks and Indestructible Auras to buy even more time for the shadowy horse to rear its head. I believe the fort was held down by the mighty Pikemen. I didn't dare attack with them, for fear of the confusing banding actually doing something and blowing up the universe. Finally, Bird Maidens were red's representatives, as well as that lone Rupture.

That's enough of the olden days of my Magic experience, so let's fast forward a bit. I knew when I learned this week's theme that I would have to unveil my very first appearance on this site; my first origins on magicthegathering.com, if you will. Before I wrote this column, a great author by the name of Chris Millar ran the show for the longest it had ever been run under one person. I liked to contribute my findings to the House Johnny, so I submitted many of my ideas to Chris, and some of them appeared in the column itself!

However, if we were talking about true origins of this behavior, we'd have to go back to Chris's predecessor: the one and only Mark Gottlieb. Go ahead and read Gottlieb's article Let Your Freak Flag Fly, which was in the thick of Arcane Week and Kamigawa Block. Around the middle or so lies my first-ever public contribution to Johnnyness. It is evident from these combo origins that I was both a) insane enough to try something so wacky and not feasible and b) proud of it. Amusingly, not much has changed. Ahhh ... sweet nostalgia.

Down past this section, I mean. Not yet. You see, I do have a job to do, and that's building wacky decks around underused cards. I was searching for an appropriate card to build around this week, and came across a perfect candidate: Scroll of Origins. Flavor-wise, it matches up with this week's theme in both name and flavor text. In terms of casual deck-building love, as far as I've seen it hasn't found a good home.

Scroll of Origins is part of Saviors of Kamigawa, the famously love-it-or-hate-it set that rounded out its maternal block. Saviors had an interesting subtheme of "hand-size matters" seen in cards like Deathmask Nezumi and the sweep mechanic. I go on this mini-lecture about Saviors because I have one more origin story to tell: my first prerelease.

Answer: My first Prerelease (which was Saviors of Kamigawa) was also my first introduction to Magic with a slightly competitive edge. On top of this, I had no clue how to draft well, seen in my pack one, pick one Curtain of Light, which I picked (probably over a bomb rare of some kind) because I thought the effect was interesting. Over the course of three packs I fashioned a deck that seems to have everything cool: life gain (Dosan's Oldest Chant), artifact removal (Rending Vines), creature pump (Inner Calm, Outer Strength), and Pacifism effects (Cowed by Wisdom). Everything, of course, except creatures. I think that deck ran a resounding five creatures. Despite this setback, I managed to get there in my very first game. With a not-pumped Okina Nightwatch in play, I played Cowed by Wisdom on my opponent's only remaining blocker, played Plow Through Reito (returning 4 Plains to my hand, which self-pumped Okina, Temple to the Grandfathers) and finished it off with a gigantic Inner Calm, Outer Strength. Fun times, even though I lost every other game. 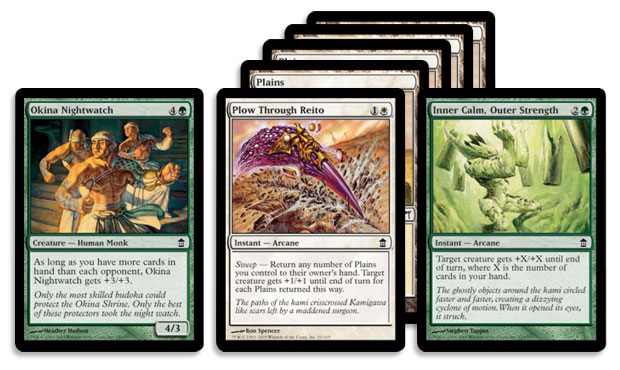 Okay, back to Scroll of Origins. The lovely lantern symbol on this card meant it fit nearly every criterion for being discussed today, so let's get to it. A card that was recently printed seems to be a good start for a Scroll of Origins deck: Reliquary Tower. Since drawing a card with seven in hand already is a bit excessive, I figured a Spellbook effect would be worthwhile. And with a set of Reliquary Towers in the list, we can go nuts drawing cards without fear of discarding them. Since the goal of this deck is to activate Scroll of Origins a lot, I eschewed the standard card-draw spells for other versions. Fathom Seer seems like a good way to fill up your hand, as does Gush. Both fill your hand with cards to turn on your Scroll. Since returning too many lands to my hand might hurt my mana development, I added Mox Diamonds. If your hand is too full without a Tower on the board, a Mox Diamond can help get your grip down to seven without losing too much mana.

Meloku the Clouded Mirror is obviously nuts. And speaking of win conditions, Soramaro, First to Dream seems like a good specimen. But those are so expensive! Although the previous two creatures will make it as singletons, I really want to win via Lorescale Coatl. Yep, it's back. With all the early card-draw and acceleration, it should get huge. Besides, going green allows me to play Sylvan Scrying (to fetch the key Reliquary Tower) and Exploration, which should offset all the land bouncing. I considered Trade Routes near the end of this process, but decided it would be a little overkill. Maybe it would be neat here, and that goes for any card I may have forgotten about that could fit. Try them out!


I wanted other ways to take advantage of having seven of more cards in hand, and Saviors once again provided in the form of Ivory Crane Netsuke. Some prefer Ebony Owl Netsuke, but the life gain is important to keep you afloat, and you'll be swinging with giant Snakes, so you don't need the damage.

Empyrial Plate + Saprazzan Heir is another one of those combos that I've been sitting on for a while, simply because both pieces have been out for years, and I've personally never gotten a chance to use them. Having a steadily growing Merfolk (unless it goes unblocked; good news either way) seems fun. Finally Mind Spring gives the deck some punch.

All right, here's the skinny on this contest. In the past, Deck Dares have been based on restrictive elements, to maximize the Johnny aspect of the decks. For example, Mark Gottlieb hosted two fun contests: one about building decks as a tribute to your favorite band, and the other an acronym-based tribute to any sort of theme. What I liked about these contests is that no two decks were immediately similar, to create lots of fun lists. I tried to bring that aspect to my contest.

So here are the criteria for any submitted decks. (For reference, here is a link to the Card of the Day archive.)

So that's it! Have fun (you know you're curious what cards fell on your birthday) with this Johnnytastic restrictive contest. If it helps, don't worry about building a cutthroat deck with your given cards, but just try to have fun with some goofball cards that ended up in your pile. Hopefully this contest has tickled your deck-building senses, because I'm excited to read submissions!

Oh, and if you were wondering why I saved this contest for Origin Stories Week, it's because it hinges around the concept of birthdays. If you think about it, birthdays are the ultimate origin story. There's literally nothing behind your first one, and each subsequent one documents your history.

Have fun, and see you next week! 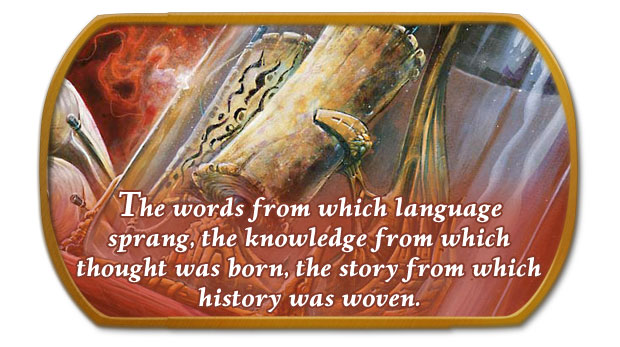