reetings, my lovely pupils! Today we're kicking off Enchantment Week here on DailyMTG, and I've got a couple exciting enchantment-based brews to show you all. As a lover of odd combos, enchantments are one of my favorite card types. Many of the craziest abilities in Magic can be found on enchantments, and some can even meddle with the basic rules of the game. With hundreds of enchantments to choose from, the variety of interesting combos you can put together is staggering. To start off with, I'll take a look at a combo that uses three enchantments in combination to quickly drain your opponent's life away. 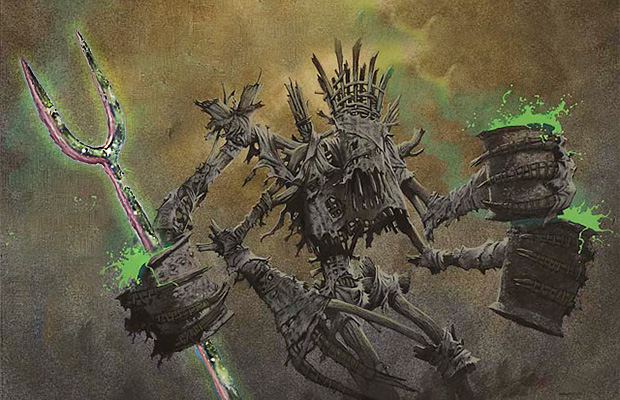 Blood Reckoning is really a multiplayer card at heart, giving your opponents incentive to attack other players by introducing a small punishment for attacking you. However, it can certainly be used in one-on-one games to make attacking a bit painful.

This is where Bident of Thassa comes in. It can force your opponent's creatures to attack, triggering Blood Reckoning to make him or her lose 1 life for each creature. You can also use Curse of the Nightly Hunt to avoid having to pay the two mana each turn.

Now, there's still one problem with this plan. If your opponent is attacking you every turn, you are probably going to die before that 1 life per creature adds up to 20. Fortunately, there's an enchantment for that. Meishin, the Mind Cage can reduce the power of your opponent's creatures to 0, provided you have enough cards in hand.

With these three enchantments on the battlefield, you can force your opponent's creatures to attack uselessly while Blood Reckoning snatches away a chunk of life each turn. As an added bonus, there are a number of other cards we can use that work wonderfully with this game plan.

Riddlekeeper can serve as a substitute for Blood Reckoning, milling your opponent instead of taking away life. It takes a bit longer, but if your opponent has some sort of lifegain, it could come in handy.

Kazuul, Tyrant of the Cliffs can serve two roles in this deck. Provided your opponent's creatures don't have something silly like flying, his Ogre friends can block for ages, preventing you from getting hurt almost as well as Meishin, the Mind Cage. If you already have Meishin, Kazuul works as a win condition, giving you Ogre after Ogre until you can reduce your hand size enough to give them at least 1 power and attack for the win.

So, now we have a plan. But what if your opponent doesn't play any creatures? This is always a potential problem with decks like this. Fortunately, we have access to a great solution. Varchild's War Riders gives your opponent an increasingly large number of creatures each turn. Normally, this would be a bad thing, but in this deck it just helps you win the game that much faster. Similarly, Forbidden Orchard's drawback is turned into an upside here as well, leaving you with a land that can produce any color of mana while also helping you win the game.

Meishin, the Mind Cage costs seven mana to cast, so we'll need a plan for making that happen. Since Meishin is really made for a control deck, why not make that happen here?

Counterspell is the tried-and-true method of stopping anything dangerous your opponent tries to do. For the incredibly low price of two mana, you can stop just about anything. In addition, I'll be taking newcomer Dissolve for a spin. It does cost an extra mana, but the scry ability can help you dig a bit deeper to find your combo.

Damnation can clear away any early threats your opponent puts out. Can't have creatures attacking before you're ready, now can we? Thanks to Varchild's War Riders and Forbidden Orchard, getting rid of all your opponent's creatures won't stop you from winning later.

Finally, I've included Fact or Fiction to help you dig for your combo pieces. It digs down five cards into your deck, and if there's a combo piece anywhere in those five cards, you'll get it, usually along with another card or two. Later in the game, it can help fuel Meishin, using the "pick the bigger pile" strategy.

Flourishing Defenses is a card I've always felt could support a combo deck, but I had never really dived in and made it happen. Well, Enchantment Week seems like a great time to remedy that problem. Obviously, the key here it to find a way to repeatedly put a -1/-1 counter on a creature without spending any resources, and without killing the creature. After exploring a number of options, from Experiment Kraj and Devoted Druid to Skeleton Ship, Morselhoarder, and Freed From the Real, I eventually decided to use Grim Poppet.

If you have two Grim Poppets on the battlefield and remove a counter from one of them, you can move a -1/-1 counter back and forth from one to the other endlessly, netting you an Elf token from Flourishing Defenses each time. Since Flourishing Defenses triggers when a creature enters the battlefield with -1/-1 counters on it, you'll always be able to remove that initial counter regardless of whether or not your opponent has any creatures.

This is the perfect opportunity to take advantage of a sad, neglected card that I've always felt a bit sorry for: Mask of the Mimic. At only one mana to cast, it certainly seems to have potential, but players often find it isn't worth spending the card and the creature. In this deck, however, you can cast a Grim Poppet, making three tokens from Flourishing Defenses, then sacrifice a token to cast Mask of the Mimic, getting the second Grim Poppet to kick off the combo. Dropping the mana requirements from five, seven, and seven to five, seven, and one is a huge boost for this deck, allowing you to put both Grim Poppets onto the battlefield in one turn.

Now, this still requires quite a bit of mana, so I'll include some cards to accelerate you to that point as quickly as possible. Birds of Paradise and Farseek can both fix your mana while pushing you toward that critical seven mana, and Joraga Treespeaker starts producing two mana as soon as turn two, allowing you to potentially cast Flourishing Defenses on turn three, and when combined with Farseek or Birds of Paradise, you can reach seven mana for Grim Poppet on turn four.

Unfortunately, Mask of the Mimic can only get the second Grim Poppet, so I'll include Eladamri's Call to search for the first one. I'll also be adding Idyllic Tutor to help find Flourishing Defenses. To help you stay alive, and to potentially get rid of anything that might stop you from winning, I've also added Oblivion Ring and Banisher Priest, which can each be searched up by one of the tutors in a pinch.

The last silver bullet I'll add is Goblin Bombardment. In case you can't win by attacking for some reason, Goblin Bombardment can circumvent that. It can be found with Idyllic Tutor, and you can cast it either with Birds of Paradise or by grabbing your single Stomping Ground with Farseek or Misty Rainforest.

4 Eladamri's Call 4 Mask of the Mimic

4 Mask of the Mimic

Now the time has come to escort our two contenders to the Arena, where they will battle it out to see who's the winchantment, and who will be outchanted.

Blood Cage played Forbidden Orchard, tapped it for mana, then cast Damnation to get rid of the token and the Joraga Treespeaker. Grim Defense played a Stomping Ground and cast Idyllic Tutor, searching for Goblin Bombardment and passing the turn. Another Scalding Tarn from Blood Cage searched up another Watery Grave, and Bident of Thassa hit the battlefield. Grim Defense played a Forest and cast Flourishing Defenses before passing the turn.

Blood Cage played a Watery Grave, then cast Blood Reckoning and passed the turn. Grim Defenses cast another Grim Poppet, getting three Elf tokens. Two counters came off the Poppet to kill the Spirit tokens that were about to attack, but Blood Cage kindly gave away two more at the end of the turn. Blood Cage played a land and cast Meishin, the Mind Cage to give all creatures -4/-0. Grim Defenses cast Mask of the Mimic to grab another Grim Poppet, then cast Goblin Bombardment to deal an arbitrarily large amount of direct damage.

Blood Cage started things off with an Island, and Grim Defenses paid 2 life to put Temple Garden onto the battlefield untapped, using it to cast Joraga Treespeaker. Blood Cage simply played a tapped Watery Grave and ended the turn. Grim Defenses played a Plains and leveled up the Joraga Treespeaker, then tapped it for mana and cast Farseek to get a Breeding Pool. Blood Cage played Blood Crypt and passed back.

Blood Cage played a Forbidden Orchard and cast Kazuul, Tyrant of the Cliffs, giving away a Spirit token. Grim Defenses played a land, cast Idyllic Tutor for Goblin Bombardment, cast that, and ended the turn. Blood Cage played a land and passed back. Grim Defenses cast Eladamri's Call, searching up Grim Poppet and casting it. Blood Cage cast Fact or Fiction in response, but failed to find a Counterspell. Grim Poppet resolved, and Mask of the Mimic grabbed the second one to end the game.

The Results Are In

Next week, I'll finally be taking a look at some of the creative decks you all came up with for the collector number contest. I can tell many people worked quite hard on these decks, and there are some really interesting ones to highlight. Join me then to see how, as Rosewater would say, "Restrictions breed creativity." See ya!