Brought to you by the Letter W

elcome, minions! This week at the Lab, I decided to do something a bit differently. There are thousands of unique Magic cards in existence, with names starting with every letter of the alphabet. X has the fewest with ten, and even Q has several dozen. Therefore, I decided to choose a letter at random, scour through some of the best cards beginning with that letter, and build a pair of decks around them. As you've probably realized by this point, the letter chosen was W.

The first card that came to mind was Warp World. I've always been a fan of the card, so finding ways to abuse it wasn't difficult. With the right list, you can cast Warp World over and over again until your entire deck is on the battlefield. 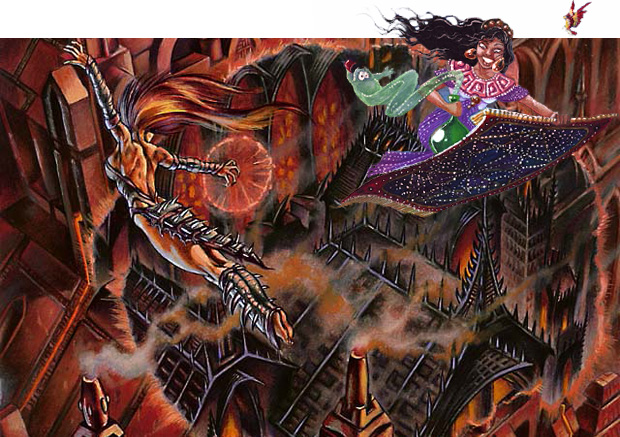 The key to going infinite with Warp World is being able to return it from your graveyard to your hand every time you cast it. There are actually quite a few cards that can handle this task. Anarchist can return a sorcery card form your graveyard to your hand when it enters the battlefield. If you hit it with Warp World, it can return the card immediately, ready to cast again. Eternal Witness also works, and costs a bit less mana as well, although that won't usually matter much since you'll be putting it straight onto the battlefield.

The other thing you'll need to keep Warp World going is some permanents that make more permanents. One of the best is Saproling Burst. It can give you up to seven permanents for only five mana, depending on how long you have before casting Warp World. That's a huge amount of value in this deck.

The other token-producing cards come from Rise of the Eldrazi. Nest Invader comes down early, giving you two creatures for two mana. A 2/2 is big enough to trade with an opposing creature if necessary, and Eldrazi Spawn tokens can be sacrificed for mana to cast Warp World if you have more creatures than lands. Continuing up the chain, Kozilek's Predator gives you three creatures for four mana, and Emrakul's Hatcher gives you four for five. The Spawn tokens are great in this deck, giving you your choice of mana or permanents for Warp World. Birds of Paradise on the other hand, gives you both at once. Although it's only one permanent, it's a first-turn play that can help make sure you have the colors of mana you need, while also helping you reach eight mana more quickly.

Mystical Tutor will help make sure you actually get Warp World in your hand each game, since otherwise you're not doing much aside from assembling an army of 0/1 tokens. In fact, That's all you're getting from Warp World at this point as well. Craterhoof Behemoth will make your 0/1 tokens into enormous trampling monsters for a turn. Although the Behemoth will be plenty big enough to kill your opponent by itself once your entire deck is on the battlefield, you don't want a timely Path to Exile to foil your plans. To that end, I've brought back Saproling Burst's old partner in crime, Fires of Yavimaya. It gives all your creatures haste, allowing you to attack immediately with your absurdly gigantic army of various creatures and tokens. If I've done the math right, your final Warp World will end with you attacking for 4,670 damage, minus any creatures that are stuck in your hand or graveyard.

It's a Spawn World

My next idea was constructed from a number of cards. Wheel and Deal, Wheel of Fortune, Windfall, and Whispering Madness all have fairly similar effects, and all start with the letter W. After considering a number of different ways to abuse this kind of effect, I settled on an old casual favorite: Megrim. With Liliana's Caress from Magic 2011, we can now play eight copies of this effect, making anything that forces your opponent to discard his or her hand potentially deadly.

Wheel and Deal and Windfall stayed in the deck, thanks to Windfall's efficiency and Wheel and Deal's ability to be cast at the end of your opponent's turn. The other cards were replaced by Memory Jar and Magus of the Jar. These two nearly guarantee your opponent will be discarding seven cards, rather than using what's already in his or her hand. That's 14 damage with a single Megrim on the battlefield, and lethal with anything more

Dimir Signet and Mind Stone accelerate your mana, allowing you to cast Memory Jar and Magus of the Jar on turn four. Dimir Signet fixes your mana if necessary, while Mind Stone can be sacrificed for a new card if you have extra mana. Finally, Disperse allows you to deal with any problem permanent, while dealing your opponent a bit of damage in the process. With all the various effects forcing your opponent to discard his or her hand, bouncing a permanent is just as good or better than killing it most of the time.

4 Magus of the Jar

Although I did a brief stint in the WWWWWWWF (What in the World, Why are We Wresting, We're Writers! Federation), today I'll be taking a back seat as our two W decks battle it out for the Championship Welt. Let's taking things down to the arena and see which side proves victorious.

Both sides started off with a land, and Grimfall made the first move with a turn-two Mind Stone. Spawn World followed with a turn-two Nest Invader, and Grimfall cast Megrim before passing the turn. Spawn World used a Misty Rainforest, then cast Eternal Witness to return the land to hand. Grimfall played a land and passed the turn, and Spawn World sacrificed a token to cast Emrakul's Hatcher, making three more. Grimfall cast Wheel and Deal at end of turn, making Spawn World lose 10 life from Megrim. A Windfall then ended the game with another 14 damage.

Spawn World sacrificed the last two tokens for mana, making the eight necessary to cast Warp World. Saproling Burst made five tokens, for a total of fourteen permanents for Spawn World. Grimfall, on the other hand, had six. Grimfall got Liliana's Caress back, along with four lands. Spawn World returned Warp World with Anarchist, then after sacrificing tokens for mana, cast it again, this time shuffling in twenty-five permanents. Eternal Witness returned Warp World again, and this one was for forty-one. A final Warp World put the entire deck onto the field, and Craterhoof Behemoth and friends attacked for a few thousand damage.

It's contest time again here at From the Lab, and this is one long-time readers might be familiar with. During 2010 and 2011, Noel held a series of votes allowing you all to select the theme for his next contest. For three votes in a row the loser, sometimes by a fairly narrow margin, was the collector-number contest. Despite losing to some of the other ideas, there was still a fair bit of interest in the idea, and now it will have its revenge.

Here's the concept. Every modern Magic card has a collector number on the bottom, below the artist credit. You can also find these numbers on the Gatherer. Selecting two of these numbers, (or only one for bonus points), build a deck using only cards that were printed with that number. For example, #154 would give you access to Forest from Planechase (2012 Edition), Masked Admirers from Modern Masters, and Fertilid from Magic: The Gathering—Commander, among many others.

Design your deck and send me the list through the email link at the bottom of the page. Entries will be accepted through September 9, which should give you all plenty of time to scour through those pages of tiny numbers. I'll be highlighting my favorites during the following weeks, so check back then to see if your deck made it to the top. See ya!