ey there, folks! It's that time of the week once again, when we collectively as Magic players of the quirkier mindsets (commonly known as Johnnies) come together to enjoy the latest fruits of my efforts. Happily, some of these efforts are actually our efforts, thanks to the wonderful entity called reader mail. Although this won't be a true mailbag column, one deck idea is certainly inspired by an electronic message, so there's that.

Plus, I'll hopefully get some cyber interest in the contest I'm kicking off next week. Yes, I know I threw a plug for it in last week's column, but just consider this extra advertising. I was always a big fan of the Deck Challenges and Dares buried in the archives of House of Cards (the former title of this column, for those who don't know) and I figured I'd try to reignite this extinguished well of creativity.

All right, the time for tantalizing hints has ceased. You may be wondering just what could be on the docket this week. Furthermore, you could be pondering what these ideas may have to do with bugs, if titles are any indication of article content. Well, I tricked you, as the headliner is an example of my fondness for wordplay and letters and such things. If a well Magic-versed person were to capitalize the word BUG, they'd promptly feed that through a Magic Babelfish of some kind and come out with

, or the colors black, blue, and green. Coincidentally (or not) these colors are precisely the shades I'll be working with today. You see, I felt a little miffed (in an obsessive sort of way) that both the Standard decks from last week were predominantly based in the colors of Naya, while black and blue were left bruised and broken-hearted (but mostly bruised.) And since green only made a guest appearance in the last deck to ensure Sigil Captain combos, I decided to give it another look alongside its enemy colors. Hey, I couldn't call this BU Time! (Although I'm sure a certain grad at Wizards wouldn't mind.)

So let's jump into a duo of deck ideas and lists for Standard, using only black, blue, and green cards as beginning points! Besides, if bugs had to fit a color scheme in Magic, BUG probably wouldn't be too far off. Although I'd personally leave off the U; I don't want nearby bugs to gain knowledge of my secret snack stash.

Blue and green have long had a relationship with snakes, those scaly and slithery reptiles. Looking just at monocolored cards, green leads the snake race with a whopping 36, according to Gatherer. Blue comes in third (appropriately behind black), but arguably made the biggest slithery splash with the influential Ophidian (though Ohran Viper and Sakura-Tribe Elder are up there as well.)

Moving to a multicolored standpoint (fit for these times), blue-green is the undisputed king cobra. Mystic Snake began the fad, and during Dissension two more snakes hit tabletops: Coiling Oracle, an always wonderful way to use

, and Patagia Viper, which hinges on blue mana in practice. Eventide recently alluded to the tradition with Snakeform. And now in Alara Reborn, two Coatls join the team; one is Winged Coatl, while the other has Lorescale Coatl.

The latter (Lorescale Coatl) has seemingly made an impression on Magic players of all psychographics. It certainly tickles my Johnny senses, and apparently it also rubbed reader Rems from Paris the right way as well. He sent me a decklist based around the Coatl (a kooky four-color concoction) that contained many interesting ideas. Rems's most interesting idea was to use the Coatl alongside a resolved Drastic Revelation. In terms of strictly card-drawing, the Revelation is very efficient as it gives the Coatl a whopping seven +1/+1 counters, all while reloading your hand. This is definitely cool.

Rems couldn't pass up the Coatl's best bud, Vedalken Heretic. Allow me to go off on a weird tangent for a moment: Every time I think of the Heretic's art (which was discussed in a recent Arcana) I think of Sunny Baudelaire and the Incredibly Deadly Viper from a children's book series by Lemony Snicket. I'm sure that makes me quite odd.

'Kay, back to business. The Heretic and the Coatl play well together in more ways then one. The Vedalkan Rogue is obviously quite good at what it does (drawing cards), which certainly helps the Coatl get huge. For evasion suitable for both creatures, Rems went with the delightfully blue-black Mask of Riddles. According to Rems, he included it because "it helps Vedalken Heretic to get through unblocked, which is almost impossible normally, and its drawing ability makes the Coatl get bigger." And of course, fear on a big, ever-growing snake is good times.

In his search for other efficient card-drawers in Standard, Rems came across Scarscale Ritual. Two cards for two mana is superb, and the Coatl's positively charged counters can cancel out other -1/-1 counters. (Speaking of this, there was some confusion over the Sigil Captain + Murderous Redcap combo last week. Many asked how it worked, thinking the -1/-1 counter would stay despite the +1/+1 counters. The two types of counters cancel each other out, for clarification—pairs of opposing counters are removed until only one type remains.) Targeting Dusk Urchins with Scarscale Ritual is good times as well. The Urchins (another genius Rems inclusion) work extremely well with the Coatl, beating early to set up a giant snake.

Rems rounded out his list with some unearthers and cards with retrace, so the random discard from Drastic Revelation wouldn't hurt as much. I liked this idea, and bumped up the Oona's Grace count (more cards!).

Time for some original contributions. I've been sitting on this nifty pair for a while: Lorescale Coatl + Sage of Fables. When you aren't beating face with giant Coatls, go with a crazy engine that says "

: Draw a card." This is like Idle Thoughts without the drawback, just to put this in context. Sadly, Vedalkan Heretic isn't a Wizard (it must have given that up upon leaving Esper) but there are other ways to dole out +1/+1 counters. Hunting Triad is straightforward, Incremental Growth is wacky, and Jund Charm is customizable. Grixis Battlemage, meanwhile, is a straight-up Wizard that helps your guys get through the battlefield.

Rems ended his email with a zinger, "I'm glad I have used all these weird cards in my deck." Although I've modified his list a bit, I can't help but agree. Feel free to do some modifying of your own!

If this deck were more Wizard-based, I'd definitely include my longtime pet card, Diviner's Wand. Fortunately, Lorescale Coatl is kind of that Equipment in creature form, so I'm satisfied for now. Another Morningtide card I considered was Mind Spring, which acts as a reinforced Swell of Courage to the Coatl as well as a geyser of cards.

The following glimmer of an idea is so blatantly over the top, Mossbridge Troll just got relegated to the minor leagues. Forget about blasting mosquitoes with bazookas: the following "combo" feels like nuking an individual grain of sand. The fact that each of these "pieces" is capable of winning the game on a decent clock by themselves is noted, but ultimately irrelevant. Basically, I barely have a reason for doing this. Sounds like the perfect environment for Nemesis of Reason.

Nemesis of Reason seemed pretty broken to me when it was first revealed. A potential Glimpse the Unthinkable every turn, on an ability that doesn't trigger on combat damage, but simply entering the red zone? For me, the real kicker was the ultra-buff 7 toughness points. You won't be chumping and Incinerating this guy very often.

What's the other synergistic creature? A little mythic rare called Lord of Extinction. Imagine having these terrifying monsters staring you down from across the table. Since the Reason's ability triggers only upon attacking, the Lord's power and toughness will have adjusted by the time combat damage is counted up. One way or another, you're winning the game.

What card fits into this game plan? Mind Funeral. The Funeral (which is real fun to play) accelerates your milling strategy while expanding the graveyard for the Lord. Even if you miss your fifth land drop, Garruk can help you cast one of your epic five-drops. What cards help you control the game while helping in other ways? Soul Manipulation and Traumatic Visions. Recover your dead beasties with the former, mana-fix with the latter, and counter problem spells with both.

Just for kicks, I threw in some copies of another terrifying five-drop (Nath of the Gilt-Leaf) who ushers in some discard. I've sort of wanted to use Pulling Teeth for a while; might as well be here. Oona's Prowler gives your opponent a nasty decision: get softened up by the flying 3/1 for two, or neutralize it and face a much bigger Lord of Extinction. Of course, your opponent doesn't know about the Lord, making this even more sinister. Here's the deck.

Enemy of the Sky

Why the weird name? Two reasons: The first time I played this deck idea (minus the Prowlers and 'Drifters), I got beaten in by many, many 1/1 Faerie Rogue tokens (from a prowled Notorious Throng). The second time, I automatically lost the game to a turn two Wheel of Sun and Moon. Hence the name (the sun and the moon are, yep, in the sky)—and the Naturalizes—came to be.

Note that I have been focusing on Standard these past weeks, and some cool Extended combos have popped up in my head during this time. I'll just leave you guys with this as a taster to go nuts with: Sigil Captain + Twilight Drover. You're welcome. 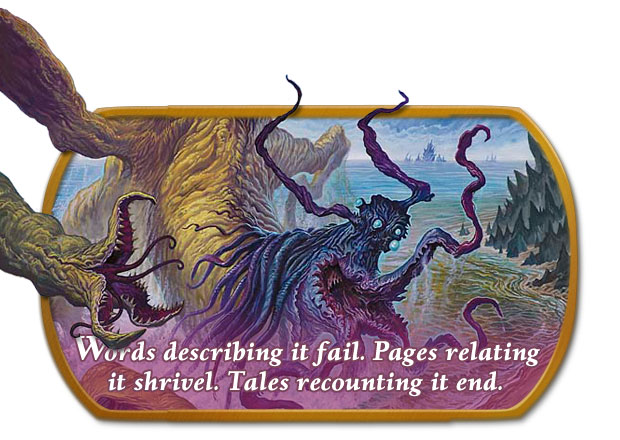