The Build Around Contest Results!

ey there, folks, and welcome back to the Lab! This time around, as promised, I will unveil the results of a little contest I ignited roughly a month ago. Click here to head back to the column where I laid down the rules and deck-building criteria. If you're all caught up, then let's get started! 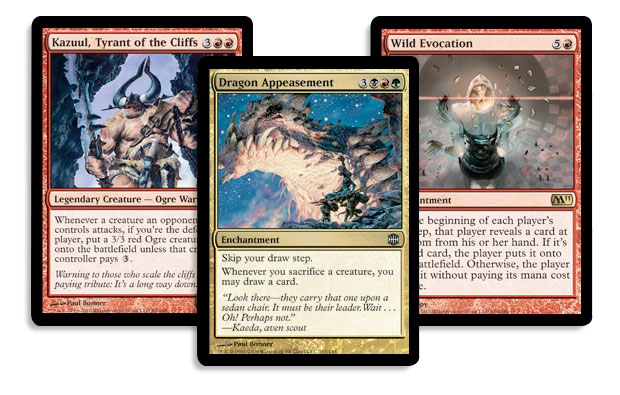 I decided to split up the decks by threes. What I mean by that is that each card (Kazuul, Tyrant of the Cliffs, Dragon Appeasement, and Wild Evocation) will get their own section, which will have the top three decks for that card, as selected by me. Due to actual size, I couldn't include all the comments from all the decks. So I only included the comments from those that got first place.

Believe me, "grading" these results wasn't a walk in the park, by any means. I paid a lot of attention to creativity, numbers, and those who have figured out my contest guilty pleasures (theme decks, "all three in one deck!!!" decks). Many decks revolved around similar themes, and I even got a couple of submissions that were card for card the same deck! It was great fun to read how the collective Johnnies of the Internet tackled these rares. I hope the results are just as enjoyable.

We'll start with Wild Evocation, which garnered the fewest submissions. The Magic 2011 enchantment certainly is tricky to maneuver a deck around. Let's see how you all did. 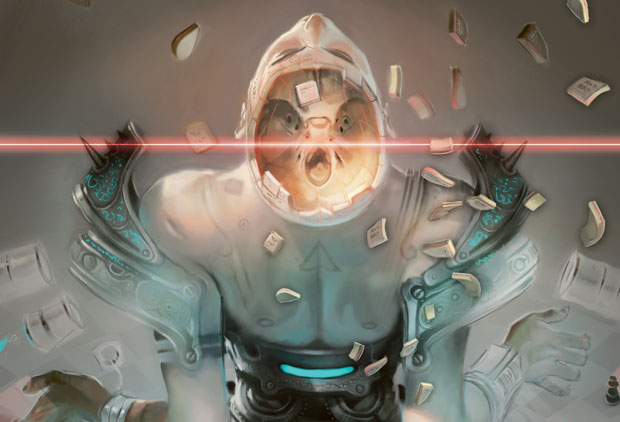 3rd place goes to Harry Readinger, who discovered a clever Teferi, Mage of Zhalfir interaction and, for fun, is also playing Braids, Conjurer Adept. His deck wants to frustrate the opponent with countermagic and Teferi then pop out fatties in the late game.

2nd place goes to Zachary Segall for riffing on the plate of synergy that is Wild Evocation + Paradox Haze + Null Profusion. Packing mana acceleration and card draw out the wazoo, this deck tries to land its enchantments and wreak havoc.

1st place goes to Joshua Abels, who built a (at-the-time) Standard legal black-red discard deck, which happens to be one of my favorite casual archetypes ever. Read on for his comments. Congrats Josh!

"1st win condition: Wild Evocation on board and only Emrakul, the Aeons Torn or Kozilek, Butcher of Truth in hand. I utilize all the discard spells to dump my opponent's hand so when they get to use Wild Evocation first they get nothing. Once either of the Eldrazi are out it's over. Liliana helps me secure them at the top of my deck. 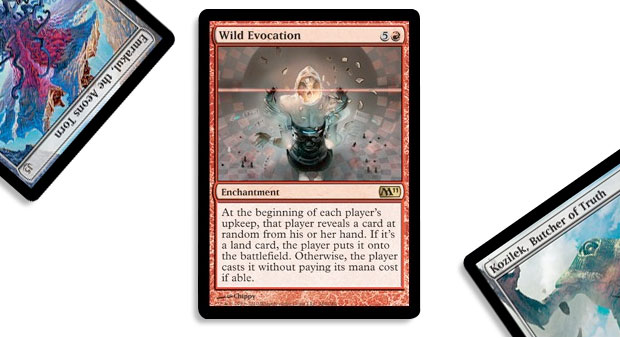 2nd win condition: Quest for the Nihil Stone. When I play with this deck my opponents tend to dump their hand as quickly as possible since they know I'm targeting it. Nihil only requires two counters then it's over. Figure two of these on the board charged I'm doing 10 damage every UPKEEP! Of course this requires the right discard spells at the right times so ... I always go for the Emrakul, the Aeons Torn win using Wild Evocation."

A card that sadly slipped right through the cracks of my Johnny artistic process, Dragon Appeasement finally got an inbox-full of deck-building love. 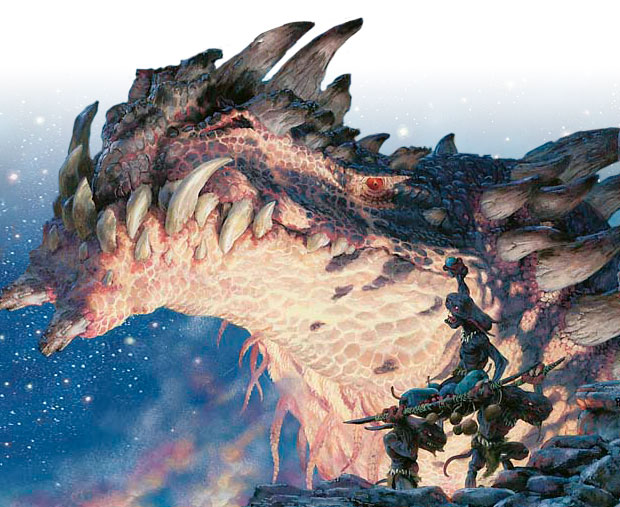 3rd place goes to Erica Socha for a fun little Goblin deck based around Goblin Warrens (which is crazy when Appeasing Dragons!)

Erica Socha's How to Feed Your Dragon

2nd place goes to Ryan Dimaunahan for his combo driven deck idea. The most popular Dragon Appeasement decks fell into two categories: Eldrazi Spawn (we'll get to that soon) and various combo decks that focused on going infinite. Ryan's uses Wild Cantor and Enduring Renewal to amp up a huge Conflagrate, amidst a Golden Wish toolbox and a dazzling array of nonbasic lands.

1st place goes to Bryan Holtz for beating the giant pack of those readers who paired the Appeasement with the Eldrazi Spawn. I picked his deck because it simply brought the beats, boasting Broodwarden and Butcher of Malakir in its ranks. Sarkhan the Mad also ensured that a Dragon could be created to appease. 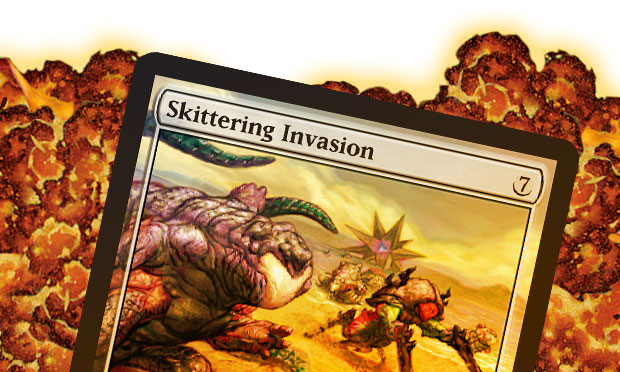 mana to your mana pool. Each opponent sacrifices a creature. Draw a card.' Things get pretty nuts, and Skittering Invasion suddenly becomes a bomb."

Kazuul, Tyrant of the Cliffs

Kazuul was the most popular of the three cards that were available to build around. A large majority of the submitted decks were amusing red-white creations that focused on basically breaking the combat phase itself. 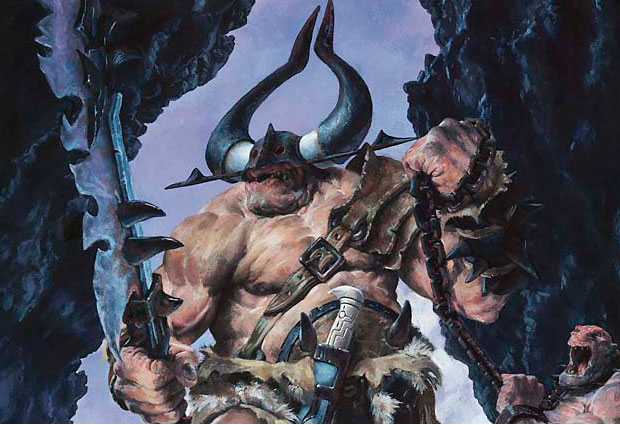 Honorable Mention: Brad Wojceshonek gets a mention for building a sprawling theme deck around one of my favorite films and trilogy-starters, A Fistful of Dollars.

2 Stuffy Doll 1 Kazuul, Tyrant of the Cliffs 1 Righteous Cause 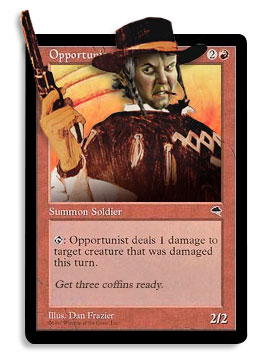 "Opportunist: A stranger comes into town and begins to turn two gang leaders against each other in the interest of making a profit.

Goblin Sharpshooter: The Stranger is a pretty good shot.

Soltari Guerrillas: While the Rojos are off waging battle, the Stranger infiltrates their home and kidnaps Marisol.

Stun Sniper: Innkeeper Silvanitos saves the day in the final shootout with one well-placed bullet.

Dumb Ass: 'Don't think it's nice, you laughin'. You see, my mule don't like people laughing. He gets the crazy idea you're laughin' at him.'

Varchild's War-Riders: Some of the Rojos men. They ride horses.

Rukh Egg: Extras included in the movie only to die.

Patron of the Kitsune: Consuelo Baxter, John's wife. What a fox.

Oracle en-Vec: Antonio Baxter. Like Marisol, he is captured and provokes a battle.

Roc Egg: See Rukh Egg, but for the other side.

Righteous Cause: Marisol: 'Why do you do it for us?' Stranger: 'Why? Because I knew someone like you once. There was no one there to help.'

Master Warcraft: The Stranger's greatest weapon is his cunning.

Incite: While Ramon wants to call a truce with the Baxters, the Stranger has other plans.

Total War: Any thoughts of peace vanish when Ramon suspects the Baxters know that he murdered some American and Mexican soldiers.

Boiling Blood: Ramon isn't very happy when he finds out Marisol is gone.

Wall of Fire: Various homes are set of fire.

Powerstone Minefield: The graveyard where the first shootout between the gangs occurs.

War's Toll: Ramon: "You mean you don't apply to peace?" Stranger: "It's not really easy to like something you know nothing about."

Bullwhip: Used to torture Silvanito in order to lure the Stranger back into town.

Fire at Will: The order to massacre the fleeing people at the Baxter house.

Heart of Ramos: 'The heart, Ramon. Don't forget the heart.'

Urza's Armor: The sheet of metal that protects the Stranger in the final shootout.

Boros Garrison: Home base for the Rojos.

Shinka, the Bloodsoaked Keep: The Baxter home, scene of a brutal massacre.

Forbidden Orchard: Location where the Rojos slaughter the soldiers and steal their guns and money."

Awesome! Okay, now to 3rd place, earned by Charles Laviolette. He used Varchild's War-Riders and Forbidden Orchard to give creatures to opponents. Then he forced them to attack with Fumiko the Lowblood. Lull is a safety net, while the perfect Mogg Infestation is both a creature wipe (for your opponent only) and a token-creator (also for your opponent only.)

2nd place goes to Fox Murdoch, who took a brutal red attitude to Kazuul, throwing in Pandemonium and Koth of the Hammer as secondary pieces. I can't not grin at that.

Fox Murdoch's The Cliffs of Insanity

4 Fumiko the Lowblood 4 Kazuul, Tyrant of the Cliffs 4 Simian Spirit Guide 4 Koth of the Hammer 4 Pandemonium

4 Fumiko the Lowblood 4 Koth of the Hammer 4 Pandemonium

4 Kazuul, Tyrant of the Cliffs
32 Cards

1st place goes to Jax Bateman for one of the funniest combos I've ever pulled off in a Standard environment. (Due to Scars of Mirrodin's rotation it's not in Standard anymore, however.)

"Another Eldrazi Monument style combo deck. With this one, it's mostly a combo deck. Where does Kazuul fit in? Donate him to the opponent with Bazaar Trader, swing with an army of token creatures, and Gather Specimens an abundance of ogre tokens by not paying the 3 mana cost. Until you get the Bazaar Trader out he still does a nice job of holding the defenses—he's a pseudo Ghostly Prison that makes flying indestructible 4/4s if you have the Monument out."

I think this is absolutely hilarious. I pulled this off on Magic Online to numerous "rage + quits"—apparently, Gather Specimens is the most unlikely fury-inducing card ever. My own modifications to this deck were some Call to Minds (to get back Gather for another go!) and some more lands.

Until next week! Hope you enjoyed these results!