elcome back to the Lab, ladies and gentlemen and other various beings! Today, we'll be taking a look at some engines. Not the internal combustion kind, of course. I'm talking about combo engines. Many of the best combo decks are built around these engines—combinations of cards that feed off each other to create a cycle, usually with some sort of game-winning output. These engines can often be built in a number of different ways, since the engine parts, individual cards that convert one resource into another, are often interchangeable. The only requirements are that you can continually generate fuel on one end and that you can effectively utilize the output on the other. 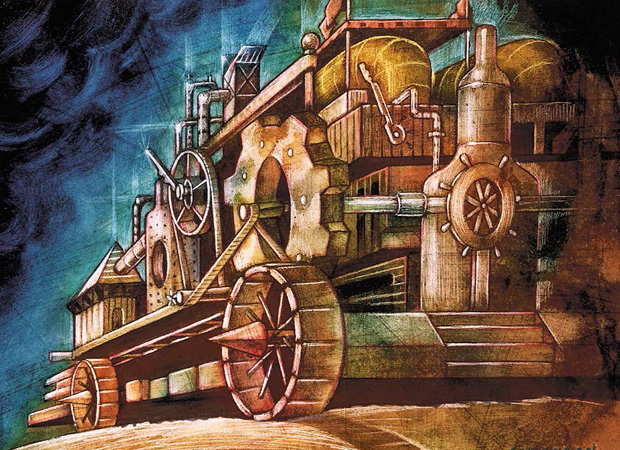 The first engine part we'll be taking a look at is Cadaverous Bloom. It dominated competitive Magic for some time, using Prosperity to build up enough cards to power a lethal Drain Life. Cadaverous Bloom converts cards into mana, and Prosperity converts that mana back into cards even more efficiently, although it can only do it once. Between the two, players quickly built up enough mana to cast a Drain Life for 20.

Return to Ravnica gave us another way to convert mana into cards: Niv-Mizzet, Dracogenius. As Cadaverous Bloom converts one card into two mana, Niv-Mizzet converts that two mana back into one card, and give you 1 damage as well. Unfortunately, Cadaverous Bloom's output and Niv-Mizzet's input don't exactly match up. We'll need a transformer to properly align the voltages. Fortunately, Orochi Leafcaller is here to help out. She can convert green mana into any color you need, and she does it with no additional charge. With these three cards on the table, every card in your library becomes 1 damage, and unless your opponent has more life than you have cards, you can win the game on the spot.

Centaur Glade is another card that helps us utilize the output of Cadaverous Bloom. It converts mana into creatures, potentially giving you an instant army if you can continue to generate the necessary resources. Fortunately, Garruk's Packleader can help out with that. Rather than consuming resources, it functions more like a wind turbine, feeding off the flow of creatures to generate cards. Since it takes two cards to make enough mana for another Centaur, you'll need two copies of Garruk's Packleader on the battlefield to make it work. Once you've put the pieces together, every two cards in your library turns into one Centaur token, and if you can't win the game with twenty or so 3/3 creatures, something has gone horribly wrong.

Worldly Tutor will help you find the creatures you need to win the game, and we'll also throw in some mana acceleration to help you cast the expensive spells required. Utopia Sprawl, Fertile Ground, and Dawn's Reflection all give you a good amount of acceleration for your mana, and all of them produce the black required to cast Cadaverous Bloom if you don't already have an Orochi Leafcaller on the battlefield.

Artifacts have often been key pieces of combo engines throughout the years. They often have unique abilities that can make magical things happen when you find a way to use them repeatedly. My next creation, however, will use artifacts just for the sake of being artifacts.

Vedalken Archmage is a powerful card-drawing machine, making every artifact spell you cast replace itself with another card. This creature is so effective at what it does, I can't help but wonder if it might have been at least part of the reason for the reminder text on the cycle of artifact lands.

Although the lands won't be drawing you any cards, there are plenty of other artifacts that are happy to do so, many of them without costing you any mana.

Puresteel Paladin is a more recent take on Vedalken Archmage. Although it's much less expensive to cast, it's also much more picky about what gets you free cards, triggering only off Equipment. Fortunately, there are a number of free Equipment spells we can use to trigger both the Paladin and the Archmage.

Accorder's Shield, Kite Shield, Spidersilk Net, and Bone Saw are basically just free card-draw spells in this deck, although they can also help you play a bit of defense, thanks to Puresteel Paladin's ability to equip them for free. Paradise Mantle is another free Equipment, but it also gives you a bit of extra mana to make sure you have the colors you need.

Azorius Signet and Coldsteel Heart help accelerate you toward winning the game, while also fixing your colors. Prophetic Prism helps with color-fixing as well, and also draws a card all on its own, helping to make up for not triggering Puresteel Paladin.

There are a number of ways to win the game once you have a large number of artifacts on the battlefield, but one of the most entertaining is a new card from Gatecrash: Hellkite Tyrant. Although you won't often be stealing your opponent's artifacts with the Dragon, or even attacking with it, it does allow you to win the game instantly if you control twenty or more artifacts at the start of your turn. With so many free artifact spells that draw you into more free artifact spells, that isn't difficult at all in this deck.

Our two champions are soaring over to the arena for a battle. Dragon vs. Dragon, genius vs. tyrant, which flying fiend will be the last lizard standing? 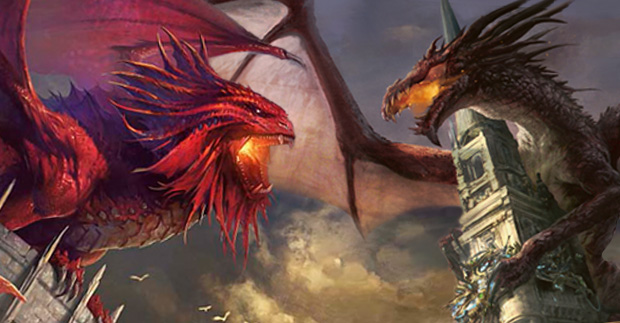 The Tyrant started off with an Ancient Den, and Niv-Mizzet played a Forest and enchanted it with Utopia Sprawl, choosing black. The Tyrant played a Great Furnace and cast a Coldsteel Heart, choosing white. Niv-Mizzet played a Forest, enchanted it with Fertile Ground, and cast Orochi Leafcaller. The Tyrant summoned a Puresteel Paladin and cast Paradise Mantle, equipping it to the creature. Centaur Glade came down for the Genius, and the Tyrant played an Ancient Den, cast Azorius Signet, and summoned a Vedalken Archmage.

Niv-Mizzet cast Garruk's Packleader, and the Tyrant started churning through the deck, getting out six free Equipment and a Prophetic Prism before the chain ended. Another Puresteel Paladin and another Vedalken Archmage came down to ensure the cascade would continue longer the following turn. Niv-Mizzet summoned a second Garruk's Packleader, and with four cards drawn for every Equipment cast, the Tyrant easily amassed his twenty artifacts and entered the battlefield himself. Niv-Mizzet cast Cadaverous Bloom, but the twenty 3/3 Centaurs were forced to wait due to summoning sickness, and the Tyrant ended the game on his upkeep.

Niv-Mizzet cast Centaur Glade, and the Tyrant churned out five free Equipment before summoning a second Puresteel Paladin and casting Coldsteel Heart, choosing blue. Niv-Mizzet cast Fertile Ground on the second Forest and made a Centaur with the Glade. The Tyrant tossed out several more artifacts, but fell one mana short of being able to cast both the twentieth artifact and Hellkite Tyrant. Niv-Mizzet cast Dawn's Reflection and entered the battlefield himself, exiling a card with Cadaverous Bloom.

Hellkite Tyrant entered the battlefield, and Niv-Mizzet had one turn to find the Orochi Leafcaller he needed to win the game. Making two red and blue mana with the enchantments on the Forests, he used his ability to draw a card, finding a Worldly Tutor to put the Leafcaller on top. A second activation drew the creature, and using one of the remaining green mana to cast it, Niv-Mizzet quickly won the game with machine gun activations of his ability for more than 40 damage.

Finding a land, the Tyrant cast a Coldsteel Heart, choosing white. Niv-Mizzet played Cadaverous Bloom, and the Tyrant cast Prophetic Prism, using it to filter the mana to cast Puresteel Paladin. It was too late, however, as Niv-Mizzet entered the battlefield and pinged the Tyrant to death 1 damage at a time. 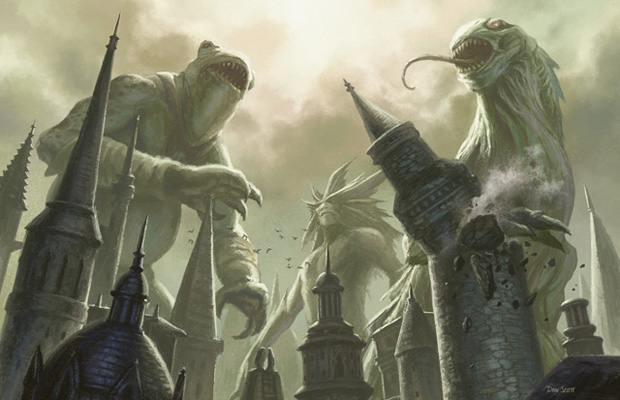 On the Brink of Evolution

Next week is Simic Week here on DailyMTG and I've got some great combos to work with. Unlike many other guilds, the Simic are fairly definitively Johnny-oriented, and they have quite a number of tools for doing crazy things. Join me to see what kinds of mutant experiments I've cooked up. Until then, try not to get in the way of any dragons.