ast week I watched The Silence of the Lambs for probably the umpteenth time. (Don't worry, though. I spread my viewings out between months.) The film is undoubtedly one of my favorite movies of all time, and when watching it I always seem to pick up on something that I had missed in previous viewings.

I was mulling over today's preview card while in the midst of the film, puzzling over how best to strategize it. I mean, it's not completely groundbreaking, like last week's Hive Mind reveal, but much like The Silence of the Lambs, it seems to have multiple possible agendas. This is despite some relatively short card text, which appears narrow only on the surface.

Like I said, I was wondering how to begin, when a scene from the movie answered my question for me. Clarice Starling (played by my favorite actress, Jodie Foster) reads a note left to her by the tantalizingly mysterious Dr. Hannibal Lecter (one of Anthony Hopkins's finest performances): "Clarice, doesn't this random scattering of sites seem desperately random, like the elaboration of a bad liar?" When Starling ponders what "desperately random" could mean, her partner offers, "Not random at all, maybe."

Desperately random. In many ways, today's preview card, Burning Inquiry is just this. It's certainly a desperate spell, when times on the battlefield are looking grim and you might risk everything to find an answer. It's also certainly random in the sense that whatever you might gain from casting it is completely up to chance.

But when you've built a deck around it, Burning Inquiry might not be random at all, as Clarice's partner suggests, because it could hurt your opponent more than it could hurt you. Ready to see the card?

A global Goblin Lore? Sign me up! Goblin Lore was always one of my favorite spells, because of its pure redness. I get the same vibes from Orcish Librarian and Burning Inquiry. All three deal with random card draw or library set-up, sure, but what makes them near and dear to my heart is that they make each game different. Discarding at random is something that creates diversity in games, and I personally am a fan of games that could swing any which way.

As I did in my preview article for Hive Mind, let's go through some different strategies for those who might want to use Burning Inquiry.

Let's just quickly reread the text of this spicy Magic 2010 common. Each player draws three cards, then discards three cards at random. What can you do to take advantage of this?

Punish your opponent for drawing. Underworld Dreams and its ilk will love Burning Inquiry. Spiteful Visions works as well, although at the cost of hurting you as well. Phyrexian Tyranny is dicey for everyone, but you might have a way to work around your own enchantments (read on later.) Regardless, your opponent will not want to draw three with any of these enchantments on the board.

Punish your opponent for discarding. The options here excite me a great deal. Megrim, of course, is the standard discard-to-damage converter, but there are some other neat cards to break here. Geth's Grimoire seems amazing; you'll draw three, discard three at random, and then draw three more. Abyssal Nocturnus is basically Megrim in creature form. Nath of the Gilt-Leaf is way off color, but it gives you a boost of Elf Warrior tokens while acting as a Honden of Night's Reach by itself.

Confessor and Spirit Cairn allow the possibility of a red-white deck. Confessor will gain you 6 life at least, and Spirit Cairn, while being slightly mana-exhaustive, is another token outlet.

Note that any of these options get insane in group play, as so many cards nowadays seems to do. Let's say you're playing with four other players in a game. Confessor now gains you 15 life, and Geth's Grimoire draws you twelve extra cards, for example. It helps that Burning Inquiry is so cheap, for possible turn-one plays like this: Plains, Chrome Mox (removing a red Borderpost or something), Confessor, Burning Inquiry. Not only is each player's hand sufficiently scrambled now, but you're at a healthy 35 life.

Reward yourself for drawing. Lorescale Coatl seems great, if you can stomach the green and blue mana in a red deck. Niv-Mizzet, the Firemind also seems great, but he's broken fifty different ways in the first place, so I kept moving on. If you had some sort of red-aligned Wizard deck (yeah, yeah, Niv-Mizzet, the Firemind), Diviner's Wand could help make a Burning Inquiry into a bonus Brute Force. Some red Wizards that I would go with might be Grim Lavamancer, Izzet Chronarch, and for even more randomness, Magus of the Scroll.

For some reason, the white cards here are quite appealing to me. Hoofprints of the Stag will get loaded with hoofprint counters once you play one measly Burning Inquiry. If you could somehow play a Burning Inquiry with an extra

available every turn, you'd get a constant stream of white Elemental tokens. Some ways to copy and play sorceries each turn include the always-mentionable Panoptic Mirror and my beloved Spellweaver Helix. 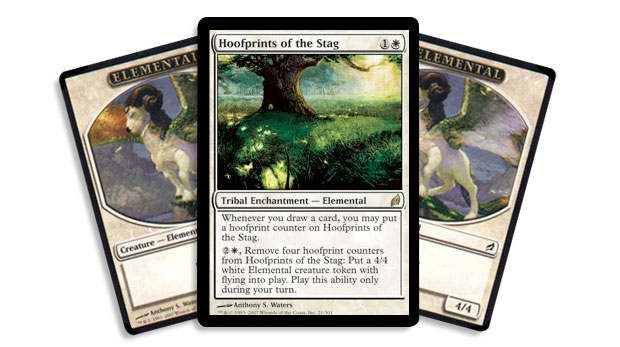 Giving yourself three draws with Burning Inquiry opens three windows for the Words cycle from Onslaught to wreak havoc. With a Words of War in play, for example, you can pay one extra mana to replace a draw with a Shock. Words of Waste is the one that excites me the most, though, as it's already a diabolical combo with Geth's Grimoire and will have your opponent discarding more than you. Words of Worship turns Burning Inquiry into:

: Discard three cards at random, gain 15 life. And if you didn't have any cards to begin with, guess what? 15 life for free! 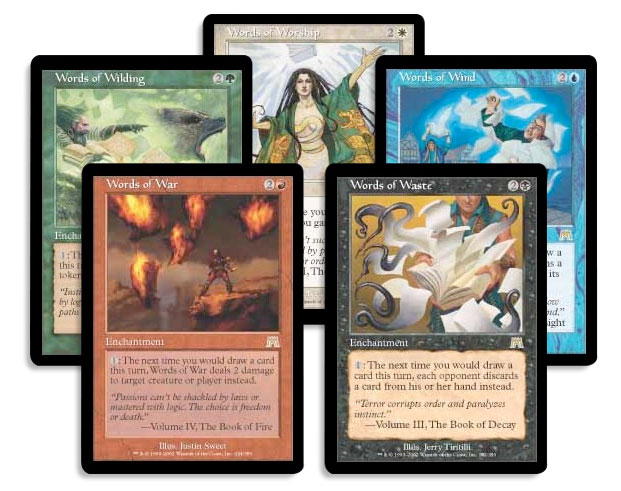 Reward yourself for discarding. You might be thinking, there's no real way to take advantage of discarding three cards at once. While there's no one card that triggers benefits, many mechanics turn themselves on through interaction with the graveyard. Playing with instants and sorceries with flashback or retrace reduces the pain of Burning Inquiry's drawback. Madness cards (including my personal favorite, Fiery Temper) work as well. Creatures with unearth might be worthy of a look as well. Keeping within a possible red and white build, some creatures and cards with threshold might work as well.

Many of these ideas could definitely be formulated into decks, and I'm going to do just that with two different blueprints, rather than have all the attention focused on the above. The first deck is, as you may have guessed, a red and white concoction based around many of the above strategies.

4 Hoofprints of the Stag 3 Goblin Lore


There are lots of little synergies. Cycling cards work well with both Confessor and Hoofprints of the Stag, as these enchantments will recognize both the discarding and drawing of the mechanic. Since retrace involves the discarding of lands, Confessor and Spirit Cairn will trigger. The thought of retracing Cenn's Enlistment and paying an extra

to get a total of three tokens makes me smile a bit. With all of these tokens (including the Elemental tokens from the Hoofprints), I figured Wayward Angel might be a decent win condition. Of course, a controlling deck such as this could choose any big flying beatstick. 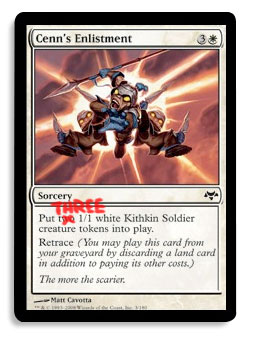 Goblin Lore is a one-sided Burning Inquiry, so I included it. With such a big graveyard, a singleton of Ancestral Tribute seems good, and added to the life gained from Confessor and Words of Worship, you should be out of the woods late-game.

Put Your Nose to the Midnight Oil 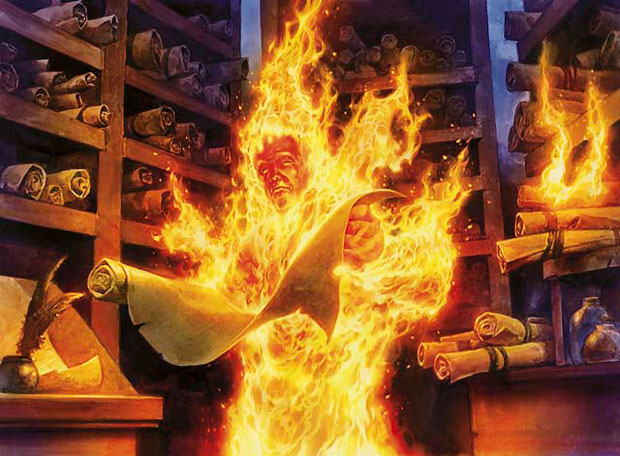 This next deck is completely unexpected, as it doesn't use any of the above strategies. One of the first thoughts I had upon seeing Burning Inquiry was involving it in that funny thing, the red mill deck. Sure, Burning Inquiry wouldn't exactly be a deck-changer, but just another key cog in a deck that involves Wheel of Fate, Book Burning, and Barbed Shocker-esque cards. 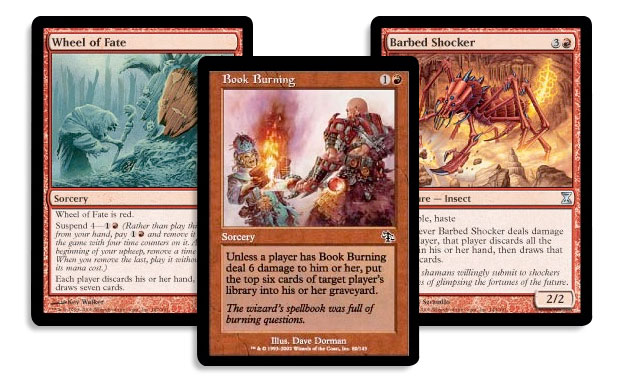 Then I had a bit of a Mind Spring, er, Braingeyser, er, Brainstorm. (Got it finally.) Burning Inquiry does quite a bit for only one red mana. What if I paired it with ... Djinn Illuminatus! The genie lord of replication loves working with Book Burning anyway. Let's say you land the Djinn on turn five, thanks to a Seething Song. Next turn, lay a red producing land, play a Burning Inquiry, and replicate it five times. That's 18 cards from a single spell! Book Burning, as I said, is painful as well.

The only problem is that Burning Inquiry applies to you as well, meaning you'll deplete your library equally. What's a stupid way to tip the scales? Obstinate Familiar. Hey, I told you it was stupid. It's a "may" ability, so early on it won't change anything. When you start replicating Inquiries, though, you can keep your library safe at the cost of your hand. 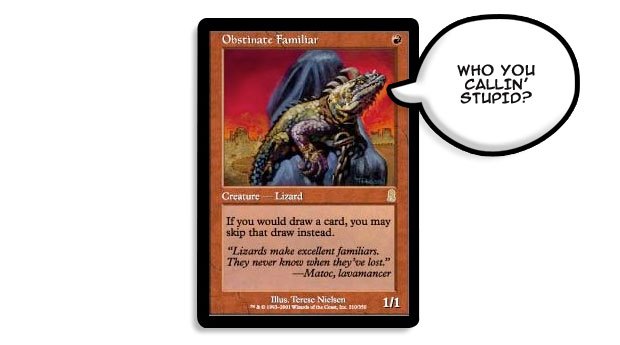 Sadly, Wheel of Fate cannot be replicated, as it has no mana cost at all, and unpayable costs can't be paid. Dizzy Spell can find the two red one-mana spells, so no worries there. And, just to celebrate the incoming Magic 2010, I loaded the deck with some fun red and blue instants and sorceries from the set, for replicating purposes. Those links won't go anywhere for now—check back when the set populates Gatherer on Friday to rediscover the deck!


Until next time, have fun with red card draw! 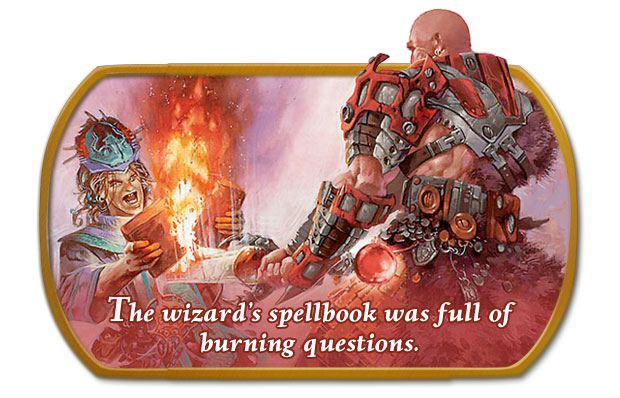