elcome back. It's World Magic Cup week, which is a bit strange since I don't have many diverting thoughts about the event. I've got the usual package today: three decks around recently printed cards. No real thematic linkage this week. I considered a reprisal of my article/experiment from a couple summers ago, but then I stopped considering that, and started considering mentioning it in the intro.

As of late, blue has been dabbling in aggressively costed beaters. Sure, Merfolk have always been around (and newly bolstered by Master of the Pearl Trident) but recent stuff like Phantasmal Bear and Delver of Secrets have really pushed the pedal for blue beatdown. Now we have Jace's Phantasm, a card that packs a potential 5/5 heft for a miniscule

. The only restriction functions like a lengthier threshold, which in a deck with mill elements is ably achieved. Since I want to beat down with 5/5 flyers, though, I can't have an overly heavy mill focus. There's other ways of filling your opponents' graveyards anyway, like forcing them to draw and discard a bunch of cards. Well, if Jace's Phantasm is floating around, his Archivist should be feverishly filing away nearby. Jace's Archivist can spin-cycle the board's libraries, dampening graveyards and washing hands alike. He's very hygienic.

The other Phantasm helper is Hedron Crab, a more traditional mill card and a strong one at that. Some early Crab scuttling with Flooded Strands can lead to quick boosted Phantasms. Other times, the deck's tone will feel more controlling, due to my blending of certain white cards into the deck. The major attraction was Proclamation of Rebirth, a card that could return three Phantasms at once from my graveyard to the battlefield. In a late-game situation, even two can tilt the game in your favor. Wrath of God can wipe the board clear for a forthcoming Proclamation to return the probably-swelled Phantasms.

I added some other diverse one-drops to give my Proclamations some reach. Goldmeadow Harrier can stymie attackers, and Weathered Wayfarer can help me out in a landless situation.

The last adds were a set of Into the Roils and some Archaeomancers to return some of my key spells. And since his playthings anchor the deck, I gave a singleton slot to Jace Beleren.

4 Proclamation of Rebirth 4 Wrath of God

It's been roughly five years since the introduction of Planeswalkers. I initially found them extremely off-putting and unwelcome in Magic's state at that time. Since then, the game has evolved to accommodate their presence, and apart from some overpowered bumps in the road (the unfortunate Jace, the Mind Sculptor), the walkers have finally earned my acceptance. At this point, each of the five original Planeswalkers that popped up in Lorwyn has three distinctive incarnations. (Well, kind of four, in Garruk's case.) Magic 2013 provided Ajani, Caller of the Pride and Liliana of the Dark Realms to round this out. Both are intriguing, but Lily 3.0 is ultimately more exciting. As in, her ultimate is insane. And her other two tricks do excellent work. 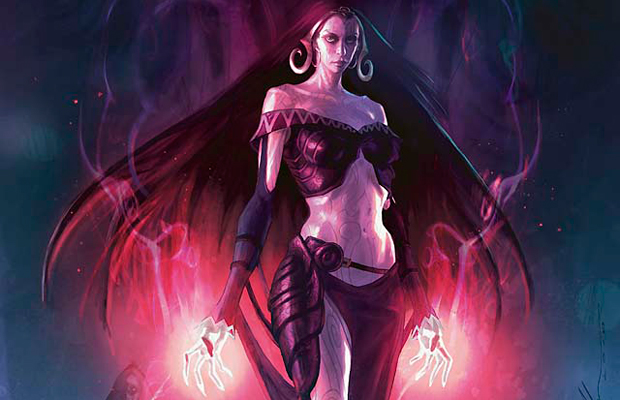 Liliana of the Dark Realms | Art by D. Alexander Gregory

While thinking on where to begin, I received a deck idea from Brian Lejeune, who wanted to add Doubling Season, that goofster card. He wrote:

The focus of this deck is to get out Doubling Season ASAP and then drop Liliana of the Dark Realms. At this point she will enter with 6 loyalty counters and you can activate her ultimate and get that emblem immediately! Now all your swamps can feed your Genesis Waves and Exsanguinates FTW. Urborg, Tomb of Yawgmoth really helps if you have a lot of Forests after getting the emblem. Other fun things to do are Sorin Markov's ultimate immediately if Doubling Season is on board, and he survives at 1 loyalty. Of course, the best is when this all happens at once off a huge Genesis Wave, putting in a Doubling Season or two and ending up with multiple Planeswalkers all activating their ultimates.


I liked the idea behind Brian's list enough to have a fresh swing at it. I started over with Liliana of the Dark Realms and Doubling Season, aiming for the instant-ultimate soar to twenty-plus mana. Instead of Exsanguinate (a fantastic card, no doubt), I went with Profane Command, a kill method with some extra gadgets. I decided to abuse regular +1/+1 counters with Doubling Season rather than loyalty counters. Fertilid came to mind as a fitting mana accelerant, and Spike Weaver is incredible in Doubling Season and merely great otherwise. Fogging the combat zone can allow Liliana to safely build up to 6 as well. In some situations, Lily might need to wreck an opposing creature, but to lighten her removal duties, I added a pack of Maelstrom Pulse.

In fact, there's a bunch of mixed goodies in this deck, and I was happy to use Diabolic Revelation to find them all. Although the simpler Diabolic Tutor is often a better choice, this deck is capable of giant X values, and a monstrous Diabolic Revelation aptly mimics the notion of dark forces shoving twisted thoughts into my brain, and by that I mean it's fun. There's a lot to learn, too. Mind Shatter can destroy my opponent's hand, leaving him or her powerless to stop me. Dark Impostor seemed really fun in the super Swamp environment, since it can take out any problematic creature for the suddenly low price of six mana. And in the right Season, his counters will double! Shrouded Lore can be a foolproof method of recovering any card from your graveyard to your hand with enough black mana. Stromgald Crusader is a fine two-drop that can evasively attack for a lot of damage. Finally, Consumptive Goo. Bow before it in a post-emblem battlefield, for it'll prey on smaller creatures, and once it has counters it can start targeting itself in a pinch.

4 Liliana of the Dark Realms

During my sifting through the rares of Magic 2013, looking for a promising but forgotten card, my sensors went wild upon viewing Xathrid Gorgon. After delivering an appropriately flavorful message as Magic 2013's preview card, the Gorgon's fame has receded to casual tables, where she shines. When re-reading her petrifying flavor text, I noticed that the Gorgon's victims are transformed into artifacts. So if a Gorgon starts stoning your opponent's creatures, something like Viashino Heretic could start destroying them and dealing chunks of damage.

This thought process led me directly to Liquimetal Coating. As a cheaper way of turning stuff into artifacts, it can combine with certain artifact destruction methods to deal damage to your opponent. Smash to Smithereens is a primary tool alongside the Heretic. Detonate can bust something for damage. Another weapon is Afflicted Deserter, which is Smash to Smithereens on a 5/4 body—Werewolf Ransacker—which looks... Badass.

Torch Fiend might not deal damage, but it's an effective two-drop, so it joins the ranks. (Somewhere, a Hearth Kami screams in agony.) With so many two-drops, I included some Shred Memory, which can find the all-important Coating. Transmute, alongside creatures with tap abilities and instants, stir a medley of timing that Afflicted Deserter can slip into. To return the Ransacker to human form (thus awaiting another Smash to Smithereens), I used Grinning Ignus, which can cast itself again. The Ignus can also ramp into Xathrid Gorgon, so that's nice too. The last addition was a personal fist pump moment. Magnetic Mine!