ello and welcome to the Lab! I hope everybody had a refreshing and spectacular Worldwake Prerelease. I'm super-eager to get my hands on the cards from the new set. I've already been getting some suggestions, but I might as well open up the floodgates: Send me ideas! It's been proven throughout the entire history of From the Lab that collaborative effort can bear combo-riffic fruit, and I'm hoping the Johnny-tastic cards of Worldwake start jogging your minds with cool ideas.

Speaking of emails, remember that Planeswalker Contest I kicked off roughly a month ago? Well, the results are on the horizon and nearing, like that Void thing in Super Paper Mario. You should expect the first part of a two part results column in two weeks, which would be the next non-theme week the site has. The second part will come two weeks after that, fulfilling the pattern! Hooray for logic and references to Wii games!

So what's on the docket for today? I don't want to dive into Worldwake quite yet (I'll save my best Olympian springboard techniques for next Thursday, in the thick of a very Worldwake-appropriate theme week.) Instead, I'm continuing with today's little theme of email promotion and showing off some ideas received through the Electronic Pony Express. Happily, many of the cards my readers decided to build around have been sorely overlooked. If ever there's a column for the overlooked or forgotten card, From the Lab is it. Let's hit it!

First stop on the mildly overlooked card express is Bramble Creeper. Yes, that Bramble Creeper. Yes, the "mildly" should probably be removed in this example. Yes, I'm serious. However, I wouldn't be serious at all if it weren't for a nice email I received from Matt B. He seemed to share my apathy toward the Elemental at first, but then went off. He says:

"When I first saw Magic 2010, I figured, 'Wow. Bramble Creeper? REALLY? It can't block like a standard Spined Wurm, AND it loses a point of toughness? This is unheard of!' Then I saw its true value. Every time it attacks, it gets five extra power. So why not make it attack more than once in a turn?"

This makes perfect sense to me. Not only will you pump your Creeper up to a 10/3 with a second attack, but you can also take advantage of cards that care about another creature's power. Matt included cards like these, namely Soul's Might and Soul's Majesty. He also enhanced the Naya theme of those cards with some of the "5 power matters" cards. Mosstodon can ensure your 10/3 Creeper hits something for a lot. 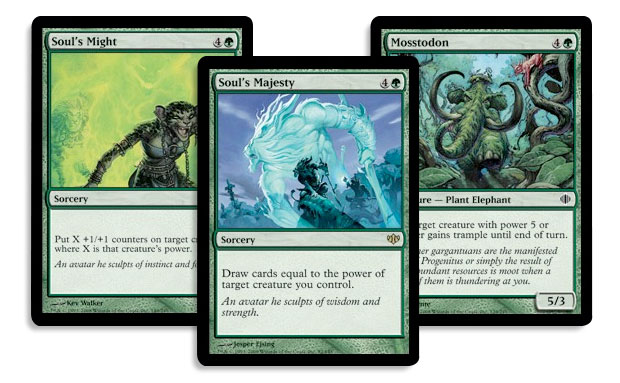 Wait, how are we getting an extra combat step again? Matt went with Finest Hour. This was the beginning of an exalted theme in this deck. Rhox Charger and Battlegrace Angel can help matters there.

To keep the deck churning in the early game, Matt included Walls like Wall of Blossoms and Jungle Barrier. These are nice, but I decided some mana acceleration was needed, and went with Sakura-Tribe Elder and Noble Hierarch instead.

With Bramble Creeper being a 0-power creature that ultimately hits hard, I decided to add some cards that played around with creatures' power. Wave of Reckoning could be an interesting and fun Wrath of God variant that spares your Hierarchs, Creepers, and whoever is holding a Spidersilk Net. Ensnaring Bridge also can stop some decks singlehandedly while letting your 0/3 (soon to be 10/3) Creeper head right into the fray.

Matt contributed most of the singletons and seemingly random cards. He included Vines of Vastwood for many reasons, the best of which was, "PLANTS IN THE ART!" Also, it amps up your Creeper even more. If I were to start this deck from complete scratch, I would increase the exalted percentage in the deck, starting with the aforementioned Rhox Charger. I'd also like to monkey around with Riptide Mangler, an interesting power-changing creature. That would probably mean upping the blue in the deck, which might be necessary to draw all the pieces. Overall, this is a snapshot of, as Matt said, "[...] a deck built around a core set common, after all!"

Another reader mail that I received a while ago contained a fun-looking Standard list using a rare that is the textbook definition of overlooked. This card is Electropotence.

"Why is this red rare enchantment from Zendikar so overlooked? It seems fine to me!" And it does to me as well. But Electropotence looks very similar to Pandemonium, a classic multiplayer and casual enchantment for red combo-y decks. Pandemonium is such a famous and powerful casual card that it tends to outshine cards that are clearly in its bloodline.

I was glad to see reader Sam R. take matters into his own hands and use this card. First, though, an explanation on Electropotence, in case that previous paragraph confused you. Unlike Pandemonium, Electropotence only triggers with your creatures, but the trade-off it costs an extra

to use its ability. Still a very potent (ha!) card.

Sam understood Electropotence's potential game-winning abilities in his enclosed deck list. He decided to look for high-power creatures that came into play on the cheap, and he found a perfect card in fellow enchantment Zektar Shrine Expedition. When you have all the quest counters on the Expedition, you can sacrifice it to pop a 7/1 into play for free. No more worrying about scrounging for that extra

when you've got free hasty 7/1 Elementals. Just use Electropotence to zap a blocker for 7 and swing for the same amount. If there are no creatures to zap, your opponent is facing a whopping 14 damage.

The damage (and viability) get pretty extreme when you consider Elemental Appeal. As Sam says, "If you somehow get twelve mana, up to 28 damage!" Since we want to keep the lands coming to fulfill Zektar Shrine Expedition, I added green for some super-ramping.

I loved Sam's use of Quest for Pure Flame for even more doubling of damage. To ramp up those quest counters, he used a suite of small burn spells, like the potentially repeatable Punishing Fire.

My contribution to the deck will be Dragon Broodmother. Usually I won't be paying

to Flame Javelin something, but the Broodmother makes little 1/1 tokens each upkeep for free. Paying

for a ping each upkeep is pretty underwhelming until you consider devour, which can make your "little" Dragon tokens huge. Thus, if you spawn a Dragon token with the Broodmother and eat something (perhaps another 1/1 Dragon token), it will already be a 3/3 by the time Electropotence wants to do something. Paying

for repeated Lightning Bolts, or better? Now that sounds good.

I haven't seen my newest pet card Frontier Guide get too much action yet, and the deck needed more creatures to supply Electropotence, so I cut my initial four Harrows in half.

Let's now turn our attention to Obsidian Fireheart, the giant, fiery Elemental in the room. This mythic rare has an undeniably cool ability, reminding me of a super-charged and bigger Bomb Squad. Unlike the Odyssey Dwarf, which blows up the lands, Obsidian Fireheart just sets them on fire. Forever. Even after the Fireheart has bit the ash. Some seemed to be peeved at the Fireheart's reminder text, perhaps because it injects a little too much flavor into the rules talk. As a flavor junkie, I can't say I'm part of this "some."

Anyway, the first strategy I thought of was to just pump all my red mana into the Fireheart, targeting as many lands as I could. Then, they'd all burn before my opponent's eyes! (And in them, too, I hope.)

The remaining cards should ideally be blue Elementals, or Elementals that like upkeeps. Well, Mulldrifter was probably going in the deck anyway, so that's an easy four-of. Hellfire Mongrel is another opponent-upkeep-damage Elemental. It's cheap to play, but relies on your opponent's hand to be somewhat empty. If only blue had discard! Well, thanks to the color-bending of Planar Chaos and the discard theme in Odyssey block, it does—specifically, Piracy Charm, and the eerily fitting Coral Net. Wow, it's a little scary how well that fits—it hinges on the opponent's upkeep, it's a form of removal, and it involves discard.) I love moments like that! Pendrell Flux works on nongreen, nonwhite creatures as well.