ello, and welcome back to the Lab! I hope everyone out there had an excellent experience at the Rise of the Eldrazi Prerelease this past weekend. I always have a radical time slinging new cards, and I know many of you Johnnies out there do as well. In my opinion, opening a pack of a new set is almost like peeking at a personalized, 14-card version of the Visual Spoiler. 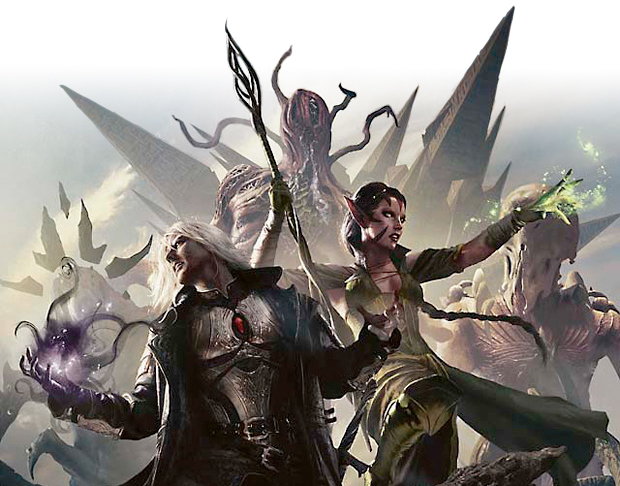 So as you've probably seen, the colossal and all-powerful Eldrazi burst forth from the depths of their world and proceeded to wreak havoc. Their influence is found everywhere, from Eldrazi Monument and Eldrazi Conscription to the long-twisted religions of various races of Zendikar. (Check out Savor the Flavor for the details. I only mention it because I'm always intrigued by the coolness that the creative team cooks up.)

Anyway, it's Thursday, which means I should get cracking on some cool Rise of the Eldrazi-related ideas pretty soon. I might as well start now.

Many of the giant Eldrazi are straight-up beatsticks, such as the major trio of Ulamog, the Infinite Gyre, Kozilek, Butcher of Truth, and Emrakul, the Aeons Torn. There are a couple other super-fat ones that offer a bit more Johnnyness, and I think I'll pursue those. (For now.)

It That Betrays was covered to great effect in its preview article, but I just want to emphasize the second ability for a quick paragraph. It That Betrays reminds me a lot of Prince of Thralls, a similar fatty from Shards of Alara block. Although the Prince triggered off of any graveyard entrance, it gave your opponent a choice between control change or a measly 3 life. It That Betrays annihilates that decision, automatically giving you everything your opponent sacrifices.

Now, this is obviously great with creature sacrifices. For example, Cruel Edict becomes Give Me a Creature. However, an unmentioned card that I would love to pair with It That Betrays would be Thoughts of Ruin. No matter how big your hand is, you'll still get as much land back as you lost! Now imagine your hand is just loaded, up at the seven or eight mark (doable in a draw-heavy deck). Stealing seven or eight lands sounds absurdly fun to me.

Artisan of Kozilek is another Johnnytastic Eldrazi to have fun with. Returning a creature from the graveyard to the battlefield is always fun, and it becomes potentially insane when it's tacked on as a free trigger. Of course, you still need to shell out nine mana to cast the Artisan, as it won't trigger when it enters the battlefield like many others do. Perhaps you could use the Urza's lands and Eye of Ugin to cast the Artisan quickly, returning any cool creature of your choice.

All Is Dust is an extremely exciting mythic rare that is, in some corners of the Magic community, being touted as the next Nevinyrral's Disk. The tribal sorcery can Dustify anything as long as it's colored. Through email, James Merry decided that lands just weren't colored enough. He suggested the combo of All Is Dust + Painter's Servant, which would result in a complete Dustification of the board.

However, my first deck today will be based around Spawnsire of Ulamog, the Eldrazi with the craziest activated ability of all time. Twenty mana may be a ton, but to have the ability to cast all the Eldrazi you own at once? Tempting. 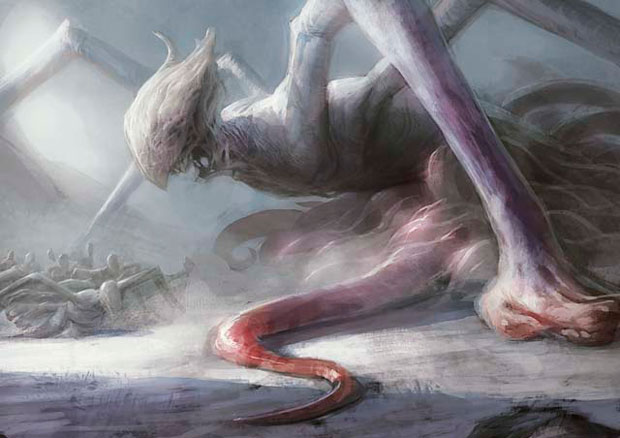 Spawnsire of Ulamog also has a quirky first ability; it can generate lots of miniature Eldrazi Spawn if need be. Two readers wrote in on how to infinitize this: James Merry, from above, and Max Ryan. They both let me know that Training Grounds (which I covered last week) lets you infinitely generate Eldrazi Spawn, and a second copy would give you infinite colorless mana. (The reasoning here is that two Training Grounds reduces Spawnsire's first ability by three, giving you a basic "

to your mana pool." engine.)

While I like Training Grounds, I'm going to go with Doubling Season here. It solidifies the deck in green (a great color for ramping to ten or even twenty mana) and promises hilarity with the many Eldrazi Spawn token generators in the deck. So when you pay

to generate two Eldrazi Spawn, the Ravnica enchantment will instead make four, which can be sacrificed for

. If you have an effect such as Essence Warden, you can rinse and repeat for infinite mana. Note that I'm not quite going infinite here. However, with the doubling of all your Eldrazi Spawn tokens (and keeping them around), you can reach your goal of twenty mana. Activating that "ultimate" ability should be equivalent to victory in your mind!

So what Eldrazi Spawn token generators are there? Awakening Zone comes down early and can spiral out of control in multiples. Brood Birthing is a genius card that pulls of two of red's more famous tricks for just

: early creatures and fast mana. Corpsehatch is removal and an Eldrazi Spawn generator. There are multiple Drones in green, red, and black that produce more Eldrazi Spawn. Red gives me an excuse to try out Splinter Twin, a card that promises to show up in list blueprints for weeks to come. Imagine making a Splinter Twin of Emrakul's Hatcher with Doubling Season on the battlefield! 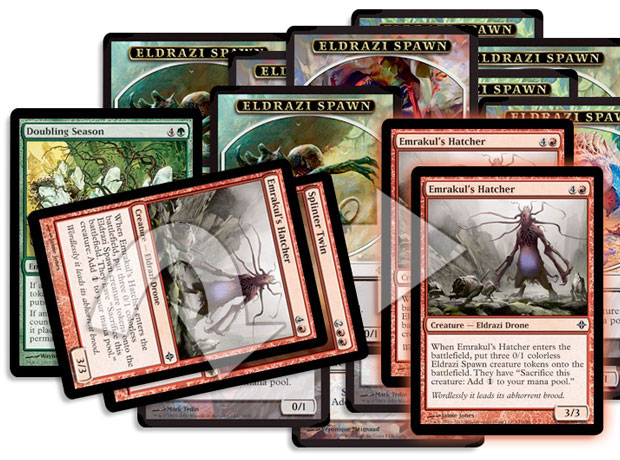 In case you draw too many Eldrazi Spawn generators and not enough of anything else, I added Broodwardens as a backup plan. The two Eye of Ugins can find Spawnsire of Ulamog or Hand of Emrakul. Essence Warden is sure to gain you tons of life with all the tokens you can make.

Now we can turn to the terrible trio. Ulamog, the Infinite Gyre. Kozilek, Butcher of Truth. Emrakul, the Aeons Torn. These are undoubtedly some of the best fatties ever printed, and I'd certainly feel a rush when casting any of them.

I'm not going to explore this in the forthcoming deck list, but it's certainly worth mentioning. The devastating annihilator ability on many of the Eldrazi could be amplified further. How? By using cards that grant extra combat phases. Having a Finest Hour in play and attacking alone with an Emrakul, the Aeons Torn will mean your opponent has to sacrifice twelve permanents. More often than not, that means their whole board. 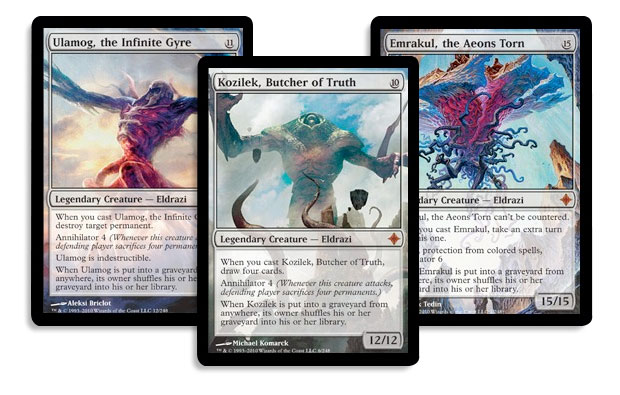 Obviously, cheating the terrible trio into play via Elvish Piper, for example, wouldn't be any fun. To reap the full power of the Eldrazi, you've got to just cast them. You know how I'm going to do that?

This mostly-forgotten card from Fifth Dawn lets you pay

to cast anything in your hand. Rustling up

is a lot easier than gathering fifteen mana, I'd say.

Kaleidostone is an easy way to generate

, as is Channel the Suns. Composite Golem can do it to while interacting with Artisan of Kozilek. With the Fist on the battlefield, sacrifice the Golem and cast the Artisan, returning the Golem. If you have another Eldrazi in hand, you can go for it right then. You basically get a free 10/9 annihilator! 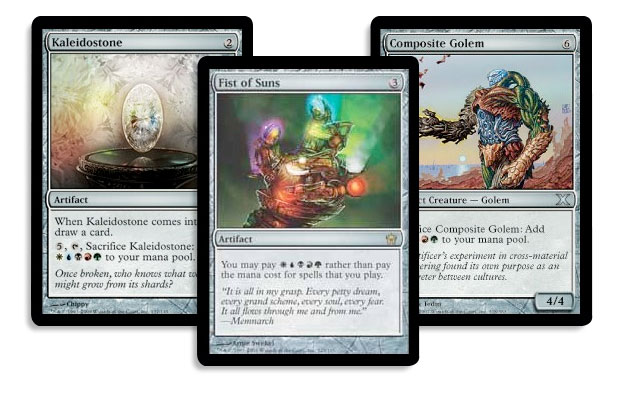 Although it's just a singleton here, I have to mention the possibilities of Maelstrom Nexus. Just imagine casting Emrakul, the Aeons Torn for

, and cascading into Ulamog, the Infinite Gyre or Kozilek, Butcher of Truth. Wowsers.

And finally, I can share the very first card I thought of when I saw Kozilek, Butcher of Truth for the first time. In fact, any of the Eldrazi will work with this card. And then when I first saw Emrakul, the Aeons Torn, I knew it was the perfect target for this card. 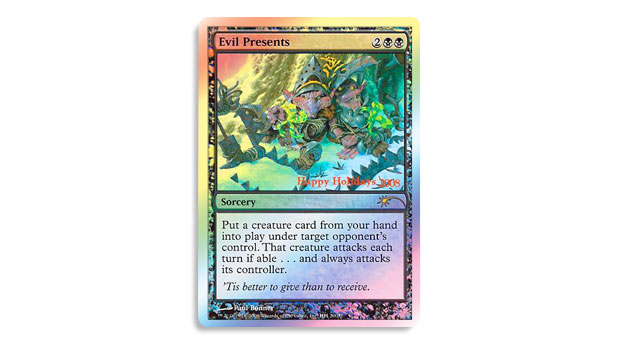 Oh, I know, not many people have one, but imagine how crazy it is! Since you place it onto the battlefield under your opponent's control, your opponent doesn't get the casting benefit. Since it attacks your opponent each turn, your opponent will be the "defending player" and thus have to sacrifice. Their only option is to try to kill it, but good luck casting Path to Exile on Emrakul, the Aeons Torn.

3 Channel the Suns 1 All Is Dust