ey there, and welcome to this laboratory of fun! Today I am taking a special note on the current state of Magic craziness, as there is an abnormal amount of it in comparison to regular Septembers.

What do I mean exactly? Now that Magic 2010 is officially old news, attention would normally shift to Zendikar, the upcoming large set. However, there are some certain ... distractions swirling around this fall. Not only is Zendikar releasing to great attention around the Internets, but Planechase is as well! The vastly fun multiplayer format releases extremely close to Zendikar. I would say more about it, but we'll save that for next week, I think.

To round out the bubbling trio, Masters Edition III is breaking the surface for Magic Online devotees. That is hitting the electronic shelves this September as well, making for a very cramped back-to-school month. I guess schoolwork will have to fall under the "optional" list.

So what to talk about today, in a week in the eye of the storm? Magic shoes? Magic soda? Magic swimming trunks? (Coming soon ...?) How about a set I haven't mentioned yet today: Alara Reborn! If Magic 2010 can be momentarily forgotten in this chaos, Alara Reborn must already be fading from your minds. Not to worry, though! There are still some fun things to do with cards from "codename Scissors," which I will outline ... below!

When I read a spoiler for a new set for the first time, I mark the cards that produced a visceral reaction. Some of these cards wind up becoming my favorite cards in the set. Of course, I also take flavor text and art and fun-based playability into account. For an immediate gasp of awe, though, not much beats Sen Triplets. 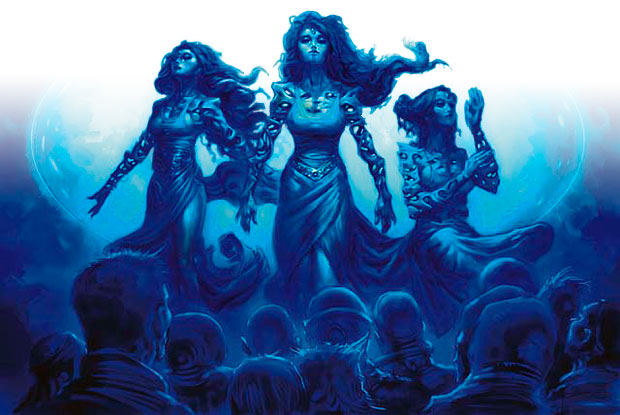 Although the ability of Sen Triplets is condensed to one giant text line, there's a lot of things going on with it. Let's go through its mini-abilities one at a time. (I'll use its Oracle text, which isn't much different from the original.)

At the beginning of your upkeep, choose target opponent. – This one is necessary, but not exactly combo material. Moving on.

This turn, that player can't cast spells – I'm breaking this sentence into thirds. Since this ability triggers on your turn, your opponent is therefore prevented from playing instants or things with flash on your turn. Therefore, the spells you play on your turn can't be countered.

or activate abilities – This is another method of completely nullifying your opponent on your turn, ensuring that he or she can't even cycle cards or tap permanents.

and plays with his or her hand revealed. – So, Sen Triplets is also a pseudo-Telepathy. Sure, it only works on your turn, but that should still give you a good idea of what to expect when you pass the turn.

You may play cards from that player's hand until end of turn. – This is the bomby effect that I love. However, if you're not careful, it could lose its fruitfulness. If you go crazy and play everything from your opponent's hand at once, you deplete it that quickly, effectively reducing Sen Triplets to a one-shot effect. There are certainly merits to this HyperSenesis, but I'm going to try playing things a little slower. Besides, you won't always have the appropriate mana to cast your opponent's spells, even though you can play lands from his or her hand as well. If he or she is piloting a Boartusk Liege deck, complete with Boggart Ram-Gangs, you could be in trouble.

I'm going to try to keep this Standard-legal, just for fun. Now what's a good way to fix mana? Elsewhere Flask makes all your lands a new type, Terraformer-style. Exotic Orchard is perfect, since your opponent's lands already have the right colors.

Fabricate, newly in Standard, seems a good way to fetch Sen Triplets, while Wall of Denial is a good wall to hide behind pre-Triplets. Bounce effects can stall early on and place threats back in the opposing hand for the Triplets to steal. Call to Heel seems mediocre at first, but adding cards to a hand that's also yours sounds good to me. Thoughtcutter Agent (another artifact for Fabricate) can play Telepathy for the early game, as can Duress. Vendilion Clique is another early annoying creature, but after a Sen Triplets, it gains another layer of usefulness by filtering your opponent's hand, which is really your hand. Altogether, this is a pretty straightforward look at using and abusing Sen Triplets with some synergistic components alongside it.

Man, do I wish Head Games was still in Standard. Heck, Jester's Mask would do at this point (and due to the singleton Sharuum, it's probably the better choice in this list.)

If this is to be my final word on the Triplets, I must observe something: they remind me a lot of the "precogs" from Minority Report. They're creepy looking, they mess with mental activity, and there are three of them! All we need is a Tom Cruise, Planeswalker card and we can kick off the theme train. (Yeah, that's not happening.)

While fantastic Mindslaver-esque effects excite me, big and expensive enchantments with interesting effects intrigue me. Unfortunately, in all the Magical chaos of the summer I've completely forgotten about Cloven Casting, which might have been a flagship card for Alara Reborn in a parallel universe. I mean, it promotes playing multicolored cards! Okay, so Defiler of Souls does that too, but does that guy let you play double Cruel Ultimatum?

So doubling up on Cruel Ultimatum is a definite beating. That's not the only gold spell to clove, however. Imagine following that up with a double Dream Salvage! Although this trick requires ten mana (eight of it colored), it's pretty devastating, and totally worth it. Besides that slice of insanity, this deck offers simpler, yet just as fine, tricks, such as double Grixis Charms and twin Terminates. Again, this is simply another straightforward deck using a quirky Alara Reborn rare with the Standard card pool.

1 Din of the Fireherd
43 Cards

I chose Bloom Tenders as my method of acceleration to Cloven Casting. With lots of Borderposts and the one Grixis Grimblade, Blood Tender can get ridiculous. Violent Outburst might hit one, but be aware of Terminate and Colossal Might before you cascade. Nucklavee and Sygg, River Cutthroat might be possible additions to varied versions of this list.

And for the record, that isn't the lamest deck name I could come up with here. How about "Lost That Clovin' Feeling."

There are lots of different directions that I could head with Mage Slayer. I mean, it's a cool, red and green Equipment that gives its bearer a weird version of double strike: deal damage as it attacks, Rage Forger style.

I could go with another relatively straightforward deck based around high-powered creatures, or I could build an Equipment-subthemed deck. But this time I am going to get a little wackier. Not full blown crazy, but a little off the beaten path.

I'm talking about certain creatures from the olden days. Specific creatures that, during combat, gave you a choice between dealing damage or a different effect. For reference, some of the more prominent ones here are Bone Dancer and Dwarven Vigilantes. Keeper of Tresserhorn goes a step further, and doesn't even give you the option of dealing damage normally.

Often, it was hard to choose between the damage or the effect. Do I Shock a creature or hit for 2? Do I Zombify something or hit for 2? And do I really want a 6/6 that casts Misery Charm (the third choice) instead of hitting for 6?

Mage Slayer evens the odds a bit. Now Dwarven Vigilantes becomes a fully fledged Lunge. Bone Dancer beats for 2 and rises something from the grave. Keeper of Tresserhorn becomes marginally better with a Mage Slayer in it's hand.

What are some other creatures and effects like this? Say hello to the Laccolith cards of Nemesis! They're very similar, differing only in that they must be blocked in order to activate. So a mere Laccolith Grunt with a Mage Slayer becomes a threat.

The two Carrion creatures from Torment become virtually drawbackless with a Mage Slayer in their capable grip. Your opponent will really have to think about exiling those cards in the graveyard, since Mage Slayer is already dealing 6 damage from the Carrion Wurm. To go with the Carrion creatures, the aforementioned Bone Dancer and Rysorian Badger step in, a mismatched pair that offer more choices for you.

We wind up with a fun Jund-colored deck that uses both old cards and new ones together in weird combat synergy.

Gorgon Flail and Delif's Cone seemed like good adds, the Cone having a similar effect to most of the creatures in the deck. Gruul Guildmage was chosen as an early drop that can both pump creatures up and slowly Shock your opponent. Coupled with all the Mage Slayer beatings, your opponent's life total should slowly but surely tick down. 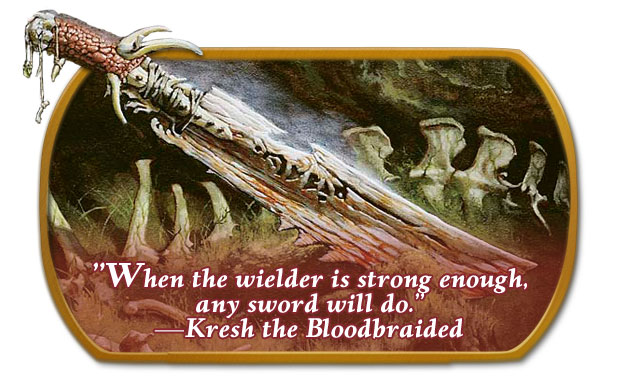