ello and welcome back to the Lab. After a bizarre week of previews for a bizarre release, I'm finally ready to dive into the thick of the bizarre cards of Magic: The Gathering Commander . These cards were designed and developed specifically for play in hundred-card singleton decks, which makes it all the more fun to yank those rules and build silly 60-card decks around them.

Some of these cards are so tinged by the scent of multiplayer that they have quite unusual translations to the two-player game. Ruhan of the Fomori, for example, is huge for its cost and yet loses its drawback in a duel. It's more of a drawforward, then. 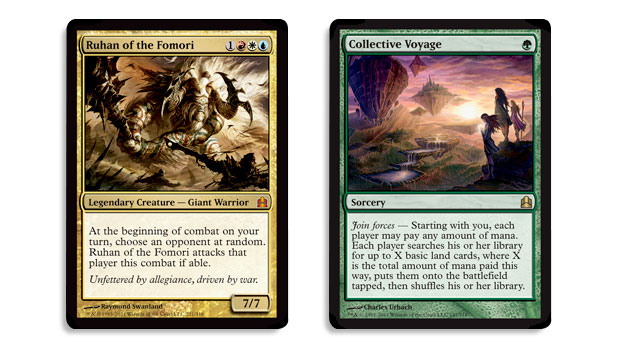 The delectable ability word "join forces," usually met with rousing applause in a group game, is met with cricket chirps in a dual. As an academic of the weird layers coursing through Magic as a whole, I find this highly amusing. Now whenever I cast Collective Voyage in a dual, I'll ensnare my opponent's gaze with my own, and solemnly ask him or her to join forces with me... against the rest of existence, defying all odds together, snuffing out the negative energy in the universe. This works a lot better when you're playing with your significant other, as I completely just made up. I'd love to test that hypothesis, but I can't. Ah well.

I'm sure I will have the opportunity to discuss the actual tri-colored commanders over the coming weeks and perhaps months. Today I'd like to do a straightforward deckbuilding column around three of the interesting nonlegendary cards in this expansion. I've been anticipating something like this ever since Planechase kicked off the annual summer multiplayer expansion tradition. Planechase and Archenemy had new Magic material too, but in the form of oversized, genre-specific cards like planes and schemes. I dearly wished that some of the cooler planes and schemes had, ability-wise, made it onto actual cards. Now my wish has been fulfilled, as wonky cards like Crescendo of War, Chaos Warp, and Stranglehold now exist and can be built around in the classic Johnny style.

As it happens, those are my chosen cards for today. I'll get on with it already.

Crescendo of War caught my eye for a number of reasons, the first being that each card in the new decks caught my eye (since I perform a memorization ritual after every set release, immortalizing the card names with their functions. It involves runic symbols and emotional sacrifice, but it works). But Crescendo of War held my attention a bit longer than some of the others, which is probably why it's the focus of the first deck today. I don't want to hype this enchantment up too much, though; I just realllllly like proliferate. 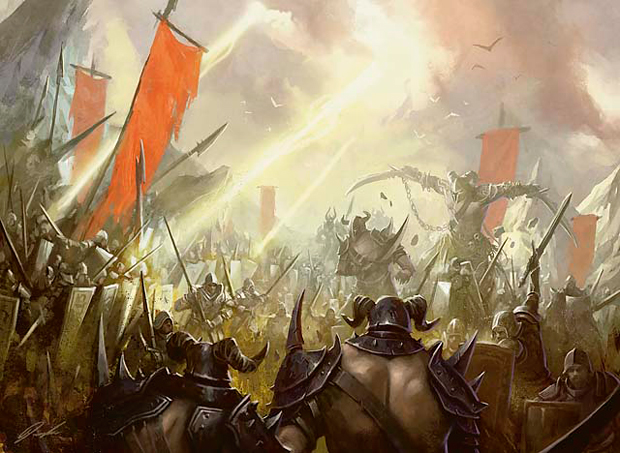 Any post-Scars block card that involves counters will automatically trigger thoughts of Contagion Clasp and the rest of the crew. Crescendo of War is one such card. By itself, it generates a steady stream of strife counters, but Thrummingbird and Steady Progress can turn that into a downpour. Thrummingbird especially likes the extra strife, being an evasive beater. 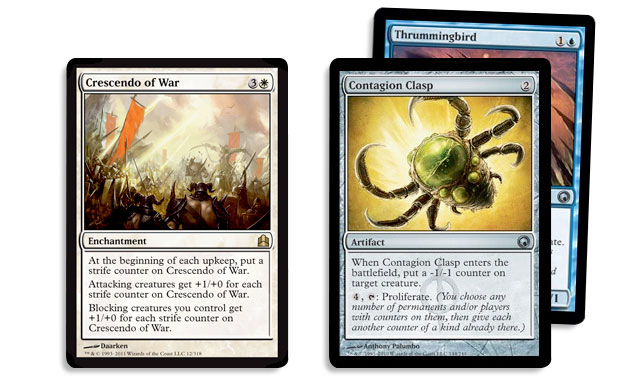 A key aspect of Crescendo of War is that the attacking bonus applies to your opponent's creatures too. After a couple of upkeeps of strife, your opponent will be bashing in hard. Fortunately, the Crescendo comes with a built-in symmetry breaker, the exclusive blocking bonus.

I knew that other than the proliferate part of the deck, the rest would be a mixture of quick creatures with combat-related abilities—vigilance and first strike, to narrow it down. Having vigilant attackers means you can handle your opponents large attackers, and first strike means you can cut them down at no expense. Kazandu Blademaster looked intriguing (especially with proliferate), so I decided to follow a path of white and blue Allies. A single Sword of Vengeance can turn any one creature into a surefire mauler as well.

I rounded out the deck with some mana acceleration (the appropriate Signets) and some tricky instants. I thought Chastise would be funny. Bait your opponent into attacking with a strife-riddled creature and promptly swat it down. Even funnier is Vanish into Memory. A versatile card (it comes from good genes), it lets you Vanish an attacker and turn all that strife into a surge of information, with a lower ratio of discarding. 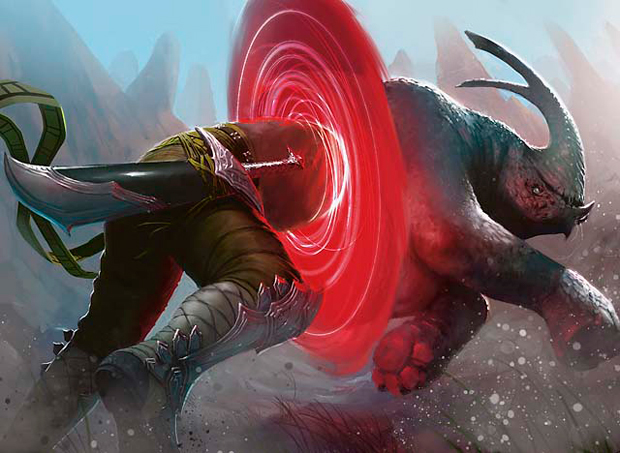 Chaos Warp is a brilliant little red card. Splicing versatility with randomness has always been fun, and Chaos Warp just graduated at the top of its class. (Now I want to major in Chaos.) You can point it at incoming attackers or your own lands. It should rarely create the same game state twice. And I love its name.

Chaos Warp is cheap and can even be sped into action with the fiery help of a Pyretic Ritual. A turn two Ritual into a Chaos Warp could leave you with a Blightsteel Colossus, or some other ridiculous fatty. (I went with Thraximundar and Thunderblust as backups.) The chances aren't high, but loading the deck with twelve castable fatties gives the deck a high maximum potential moment. 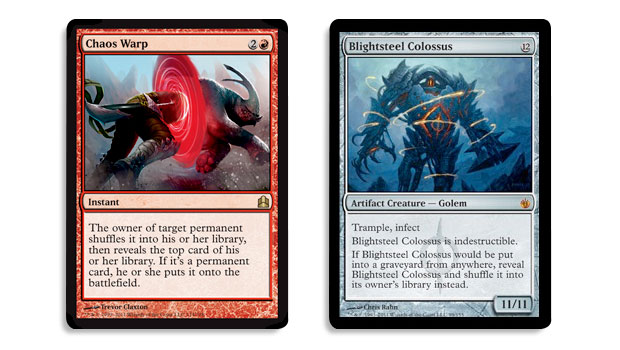 Other than landing something crazy on turn two, Chaos Warp can also answer problems from your opponent's side of the battlefield. Like Oblation, Chaos Warp deals with threats by shuffling them into their owners' libraries. To me, this seemed the perfect moment for Psychic Surgery to enter the deck as a supporting player. I'd wanted to build around this dangerous procedure for a while, but never got around to it. Lantern of Insight seemed a good fit as well, showing the top cards of each library as well as offering an emergency shuffle.

Thunderblust is easily explained as a backup to Blightsteel Colossus; it's not too expensive, it's fully red, and it can be accelerated into. Thraximundar, on the other hand might have some of you rubbing their heads. (Pat your stomachs, quick!) Seriously though, I like the haste and forced sacrifice quite a bit. The Zombie Assassin's third ability is fun, so I wanted to work in a small angle suited to that. I came up with using Skirk Prospector and Boggart Forager as sacrificial Goblins for mana and shuffling. It's a bit ersatz, but that's how I like things around here. Plus, Boggart Forager!

Stranglehold offers what appears to be blue's worst nightmare; a world without laborious planning and temporal shenanigans. No time for cleverness when one's being throttled by a ruthless barbarian. But unlike Mindlock Orb, a similar card which I happened to preview nearly three years ago, Stranglehold breaks the symmetry. No one's got you by the larynx, so feel free to search your library as often as you wish. 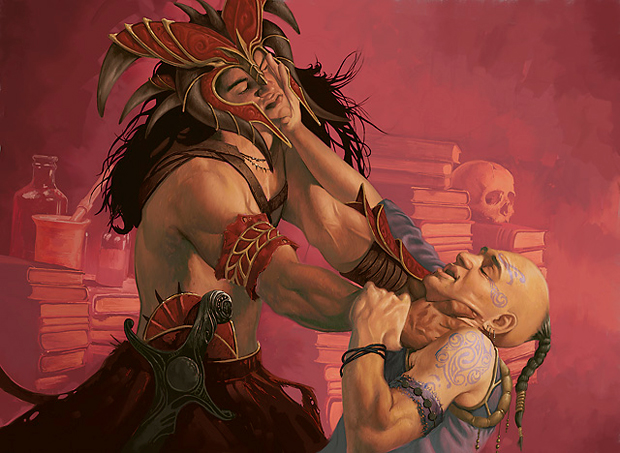 By "often," I basically mean "Maralen of the Mornsong." This Johnny wonder has been tempting all planeswalkers for a while now, offering them any weapon in their deck for 3 points of life every draw step. Cast Maralen on turn three, hope your opponent doesn't find anything too ridiculous, then find Stranglehold and start twisting the knife. Your opponent won't be able to find anything... but you will. And your opponent can't draw either. And the life loss keeps happening! 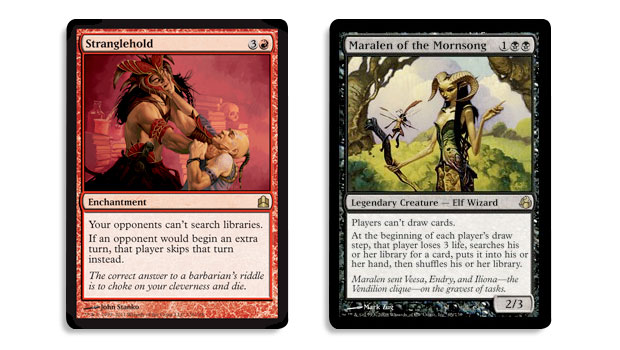 Once your opponent is under the Stranglehold + Maralen lockdown, he or she will be helpless except for the cards he or she has already accumulated in hand. Go after those with cards like Barbed Shocker, Wheel of Fate, and Incendiary Command. Maralen stops all draws, so these cards become pseudo-Wit's Ends. Now your opponent really is out of options, and squirming desperately in your Stranglehold. Tighten your gnarled fingers and laugh. When you're ready to snuff out your opponent, go fetch Boldwyr Heavyweights with Maralen. The meaty 8/8 trampler only costs four, and under a Stranglehold your opponent won't be able to match it. Another fine finisher is Shah of Naar Isle, which can be safely echoed with Maralen doing her thing.

Other than Signets and Terminates, I added Vampire Nighthawk, mostly for the life gain to distill Maralen's pain a bit. There's also a slight toolbox for Maralen. Haunting Hymn is regular discard, Shadow of Doubt is a one-shot Stranglehold that works with her of the Mornsong for a turn. And Timesifter is a weird one. With the wonky artifact out alongside a Stranglehold, you never have to worry about it backfiring.

Next week I'll dive into actual commanders. Until then!