elcome back to the Lab. HAHAHAHAHAHAHAHAHA! Okay. I'm allowed to do that. It says so in the Handbook. Yes, that's a capital H. Yes, I frequently ramble.

My, I'm quite jolted at the moment. Look how clipped my paragraphs are! Look how spontaneously I can rattle off sentences that serve no purpose other than confusing you! Eggshells drastically babble along the cresting waves of my sub-un-meta-conscious. See!!??

(Yep, this is one of those "let's use this outlet to channel all my built-up stress through random tangents like this one" weeks. Don't worry; I'll get to my backflips through rings of fire quite soon.)

So what's on the docket today? I have NO IDEA! Okay, I actually have, yes, ideas. Perhaps some decks? Combos with quirky cards from Avacyn Restored? Sure! They should probably all be doused in the zany cloud that currently envelops me. 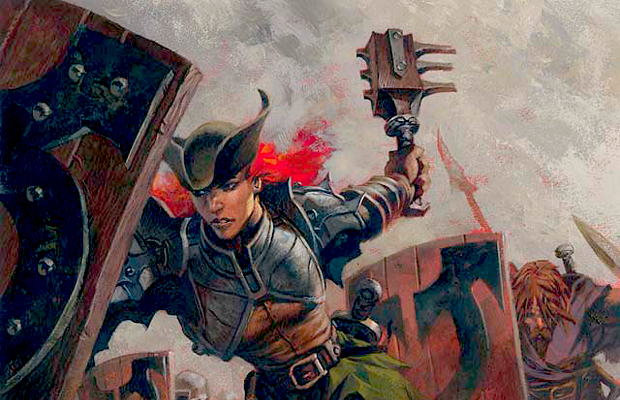 With no theme to really work with this week (let's be real here), I underwent a maddening process of scoping out cards from Avacyn Restored that I could discuss and build with today. I wound up taking a look at some intriguing black-symboled cards from the new set. Common cards tend to embody effects of the simplest nature, but with an elegant twist (often delivered through art and other flavor mediums) that enables them to resonate. I know mythic rares and rares tend to hog the spotlight around these parts (last week was a prime example) so I wanted to show my support for the trenched and generally disregarded commons.

I'll splurge for a bit on some of these commons, as I find many of them intriguing. Kruin Striker is a victory condition waiting to happen, for example, in a deck that produces infinite creature tokens. Sheltering Word seems to be the ideal piece of protection for a Tree of Redemption deck. Mad Prophet and the exciting Dangerous Wager continue the newly ushered-in brand of red card draw (punctuated with an emotive spark that distinguishes it from blue). Battle Hymn crackles with power. And strewn in between all of these cards are strategic reprints (Crypt Creeper and Thunderbolt receive the new card-face treatment); sneaky colorshifted cards (Unhallowed Pact is a black False Demise and Natural End a more instantaneous green Solemn Offering); and completely solid, how-wasn't-this-a-thing cards like Mist Raven, Mental Agony, and Pillar of Flame.

This sort of critical coverage of commons is an established part of this column's history (to see what I mean, check out the boggling House of Commons deck-building experiments innovated by former Labsman and current Duel Decks designer extraordinaire Chris Millar). I'm happy that this set has reignited the black-symboled flame. So let's dive in.

I'll begin today with Amass the Components, a card that tickles my sense of mad science. The art basically describes me at the moment: A deranged person with armfuls of stuff to accomplish and/or complete. Plus, I like saying this card's name a lot. 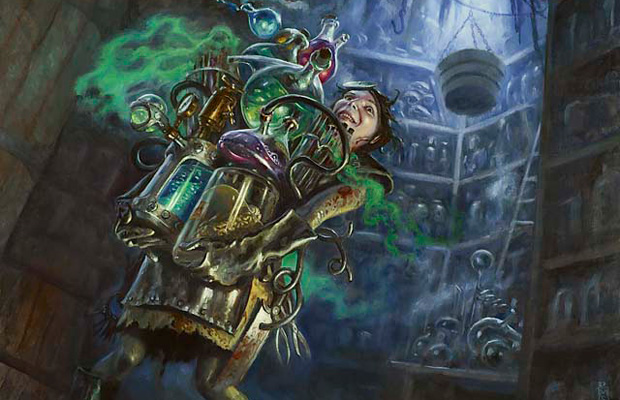 So what's so special about this card? As a Sift variant, it does a good job digging into my deck. Amass the Components can importantly place any card in my hand on the bottom of my library. This effect didn't seem that amazing until I realized it was a complete match with Tunnel Vision and a deck full of singletons.

If you amassed some components, and then placed a one-of on the bottom of your deck, a forthcoming Tunnel Vision rigged to find that specific card will flip your whole deck into your graveyard. Of course, Amass the Components doesn't blaze any trails that the scry mechanic hasn't already, but I'm saying it fits in with the general strategy of the deck. So some scry cards enter the deck as well, like Preordain and Condescend.

So how can I take advantage of my desired situation? I can think of various answers. One way is the ever-lovable Laboratory Maniac. With a single copy of the Maniac, I could stick it on the bottom of my library and then Tunnel Vision. Next turn, draw and cast the Maniac, and immediately flash back something like Think Twice to win.

Yet another method of grasping that situation is to use an effect that returns a bunch of awesome stuff from your graveyard to play. There are many cards that perform this trick, such as Open the Vaults or Twilight's Call, but I'm going to make use of the newfangled Angel of Glory's Rise, the oppressor of Zombie Apocalypses everywhere. The synergy here is that Laboratory Maniac is a Human. So even if you mill it as you Tunnel toward the Angel, it'll come back all the same (perhaps along with an Alchemist's Apprentice to seal the instant victory).

Meanwhile, if that last card were a Beacon of Tomorrows, I could cast it over and over for eternal turns. This is presuming I've reached eight mana... plus two more for an unlikely but possible win via Inkmoth Nexus. (Everflowing Chalice helps the deck's acceleration.) Hopefully you cleared the Nexus's path with a timely Wrath of God (a full four made the deck).

Another singleton to go for would be Defy Death. Tunnel to that and promptly bring out the Angel of Glory's Rise, complete with two stylish +1/+1 counters. Finally, another weird Avacyn Restored card that complements the deck is Vessel of Endless Rest. Tunnel to it and it'll replace itself with the Angel or Maniac.

4 Amass the Components 4 Wrath of God

What does Driver of the Dead actually drive? A hearse chariot thing, apparently. Oh, and also an infinite combo, a fact I called instantly upon reading this card. Any effect that returns things from the graveyard back to the battlefield singes my nostrils with the addictive odor of brokenness. 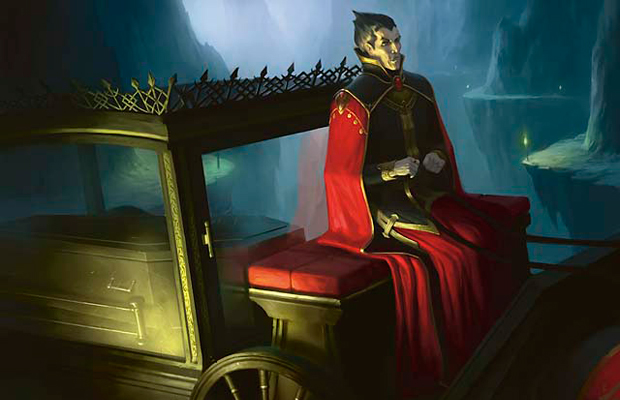 Driver of the Dead | Art by James Ryman

As a common, Driver of the Dead seems fairly complex. Effects that reanimate creatures usually are reserved for the other rarity slots. Converted mana cost is often a wonky aspect to absorb as well. But really, I'm not complaining. I'm too busy grinning about breaking this innocent common in half.

The key piece is Phantasmal Image, that most silly of Clone effects. With a Driver already on the battlefield, cast an Image, which enters the battlefield as a copy of the Driver. Now sacrifice the fake Driver to the victory condition of your choice. (We'll return to this part in a bit.)

Here's what happens. The fake Driver dies, and since the Image copies all parts of its initial target, the recursion trigger will occur. However, by the time that effect is on the stack waiting to resolve, the Phantasmal Image is in your graveyard, no longer a Driver of the Dead. Therefore, you can target the Image! It effectively returns itself! The Image comes back, once again as a copy of the true Driver of the Dead (which just stands there wondering why his ghostly doppelganger keeps stealing his carriage) and the whole process repeats.

As for the previously mentioned victory condition, it needs to be something that can sacrifice creatures for free to produce a beneficial effect. Since the two major pieces are in Standard, I figured I'd give that format a go. Bloodflow Connoisseur can grow to infinitely large proportions (as can Devouring Swarm, albeit temporarily). If these creatures are unable to smack your opponent, a Blood Artist will do the trick nicely. I'm a big fan of Blood Artist in all Magical aspects, by the by. He's like if Falkenrath Noble became a reclusive painter.

I looked for other creatures with a converted mana cost of 2 or less to fit into the deck. I figured Spellskite and Typhoid Rats would be annoying obstacles for your opponent to face, especially with the Driver around. With the six sacrifice outlets in the deck, Reassembling Skeleton begged inclusion after a while. Even without the combo, the Skeleton gets silly with a Bloodflow Connoisseur and/or Blood Artist. Ludevic's Test Subject is just a fun singleton here, but if necessary it's an unwieldy Plan B.

Other cards that round out this deck include Entomber Exarch (which can recur actual Drivers and in a pinch, it's a walking Duress) and some instants that ideally can clear the path for a giant Connoisseur or Swarm. Tragic Slip is crazy good removal, and Frost Breath locks threats down for a while. And both are common!


I am officially all out of sanity for this week! However, to make up for the lack of a third deck today, I offer a mini-contest! Woo! It's a simple deck-building challenge aimed at all those Magically inquisitive minds out there.

What can you do with Deadeye Navigator?

I have pegged this card as one of the set's more open-ended Johnny cards, and with Soulbond Week bound to crop up soon, I'd love to soon show off a glut of ideas concerning it. So send me your wackiest thoughts on Deadeye Navigator, pretty please, with a thought-manipulation device on top.