ello all, and welcome back to the Lab. Judging by the amazing response to last week's call for deck ideas, you all are as pumped about New Phyrexia as I am. The Johnny River has been flowing lately in recent design, and New Phyrexia seems to be a whirlpool of creativity. All sorts of new strategies have sprung up now that the Great Work is compleated. I can't wait to take the new cards for my first test sling this weekend. I imagine my first painful payment of Phyrexian mana will result in some nervous laughter, both to commemorate the moment and to freak out my opponent.

I seem to currently exist in a creative vortex of sorts. The consecutive releases of Nine Types of Light, Portal 2, and New Phyrexia are chaining their kinetic energy like dominoes made of pure imagination. I seem to mention this every week (probably 'cause I'm so psyched for it), but Magic: The Gathering Commander is lurking in the distance as well. Throw some general stress from real life and my hardwired insanity into the blender as well, and the resulting dust should by no means be inhaled. (Old memes die hard.)

In my constant, wide-eyed, damn-the-torpedoes style of doing things (not recommended for stable individuals), last week I apparently decided Birthing Pod could sacrifice an evoked Mulldrifter on the stack, a neat trick that doesn't actually work in real life. Stupid real life, always messing everything up for me. One of these days I'll covertly bend the world to my own rules, but until then, I'll just make the occasional mistake. Again, I'm not too put out. Mulldrifter, as one of the better card drawing spells in the deckbuilder's arsenal, performs well enough in last week's deck, even without imaginary combos. At least no one can say I don't swing for the fences. Thanks to all who gently informed me via email and forums of the botched combo.

Speaking of fun emails, like I mentioned before, I was made aware of some really nifty New Phyrexia combos by readers like you. Now, I'm sure there will be some theme weeks dedicated to the set, so I don't want to paint myself into a corner by using up, say, Phyrexian mana–based combos this week. I sometimes set myself a restriction for non-theme weeks, for extra focus. So this week I'll take a look at three decks that all have something in common: They all revolve around two-card combos, at least one from each is from New Phyrexia, and, for extra weirdness, they all happen to exist in Standard. That's too much of a coincidence (or lack of, depending on your perspective on such things) for me. So let's enter the infinite!

Perhaps my favorite conceptual aspect of any Magic set is the cycle. A collection of five cards spread across all the colors, the cycle appeals to both my restrictive and flavorful tendencies. I'm also a sucker for flexibility and enters-the-battlefield abilities, so basically the stars were aligned for me to love the uncommon Exarch cycle. These Clerics hit the board with either a bonus for you or a setback for your opponent, which sounds fun to me. 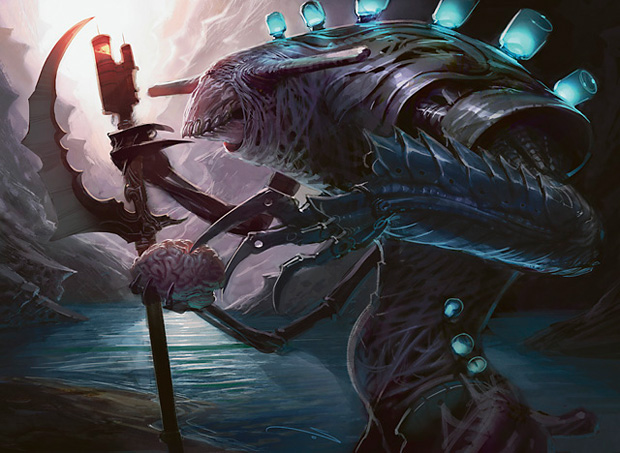 I like all five of them, but as far as creating infinite combos goes, there's one that slides right into madness. I'm talking about Deceiver Exarch, which can flash in to either tap something problematic or untap something fantastic. Untapping permanents you control is a staple of many Johnny deck archetypes. In Standard, the massively busted Aura Splinter Twin enters stage left and attaches itself to the Exarch, and chaos ensues.

This combo isn't exactly groundbreaking. It was the most popular interaction in my inbox, at least. I'm sure it's been buzzed about on many a forum, and older versions of it certainly exist. (Hi there, Kiki-Jiki, Mirror Breaker and Pestermite! Oh... were you guys, um, doing somethi—......kay, leaving now.) But it's a new infinite combo, so I get to talk about it too. In fact, I hope it randomly breaks out into the Standard tournament scene. I always root for the rogue Johnny deck.

Anyway, so yeah. Enchant Deceiver Exarch with Splinter Twin on turn four. Tap it to Twin itself, then untap it with the copy's trigger. Swing with infinite 1/4s! I added some synergistic cards to the deck as well. Tormentor Exarch makes it in (and is a fun Splinter Twin target as well.) Priest of Urabrask (a super-secret homage to Priest of Gix, for those not in the know) provides a nice spark. Soliton with a Splinter Twin and no blockers in the way creates the following engine: "

As always, the deck's quite malleable. Diminish is there solely because I think it'd be hilarious to kill something huge with it and Tormentor Exarch.

Today's next combo was also a pretty popular interaction in my inbox, and one I picked up on immediately after downloading both cards into my brain. 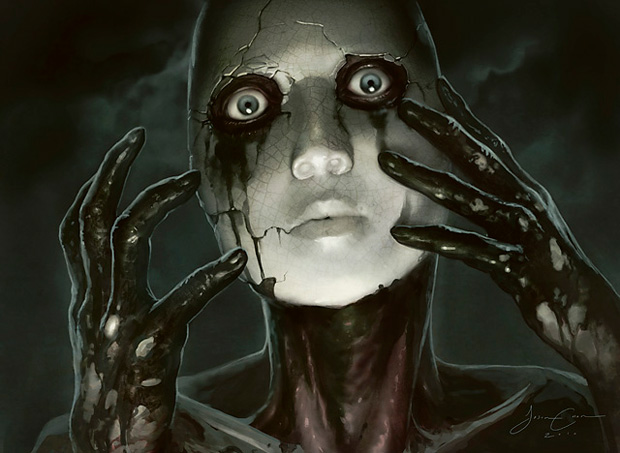 Let's begin with Phyrexian Unlife. This eye-catching card (just look at that art) is another fine iteration of cards that are tempting stabs at immortality. All of them have some sort of drawback (previous examples include Lich's Tomb and the always-wonky Transcendence). Phyrexian Unlife balances the scales by treating everything that hits you as though it has infect. Everything.

So the opportune way to build the Unlife is to build a completely anti-infect deck around it. Fortunately, the most anti-infect card ever was just printed. I give you Melira, Sylvok Outcast. The flavorful ramifications of pairing a Phyrexian card with Melira are strange, but the effect is brutal. "You can't get poison counters." Straight-up poison hosing. With the two on the board, you're effectively immortal.

Protecting these permanents became a priority. For Melira, I turned to some defensive Equipment. Darksteel Plate is nice, and Whispersilk Cloak might be even better, since it turns Melira into a slow win condition as well. There's no great way to protect Phyrexian Unlife in Standard, so I ran some copies of Nature's Spiral and Elixir of Immortality as backup. If the Unlife gets Demystified, Nature's Spiral can get it back. If you've exhausted all your Spirals, one swig of Broken Juice can reset everything.

The rest of the deck stalls and waits for the combo. Wall of Omens is a classic two-drop. Beast Within kills any corner case that may come up and beat you (you never know with the infinity of a Magic game). And I added four Chancellor of the Annex, as a fatty / fun new card. Let your opponent know before the game even starts that he or she is in for a slog.

4 Chancellor of the Annex
36 Cards

This last deck was sent in by reader Liam Howe, and I find it pretty amusing. He started off the email with the following question: "Have you noticed that there is a two card, game winning combo in standard?" 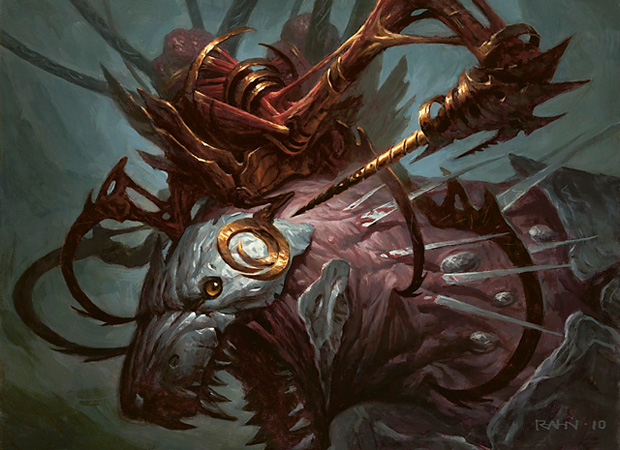 Wow. I knew Mindcrank was somewhat bonkers after first scanning it. My obligatory Magic historian side wants to mention Crumbling Sanctuary, an early pioneer of the art of transforming damage into milling. Mindcrank is much, much better, though. And all Liam had to do to break in it half was find a card that transforms milling back into damage. Bloodchief Ascension fits the bill perfectly.

I enjoy the Quests from Zendikar block, as whenever they come up during deckbuilding, they provide an interesting restriction, a requirement that I have to factor into the rest of the deckbuilding process. Either that, or proliferate. Hmph. I guess a bit of both wouldn't hurt. In the case of Bloodchief Ascension, I need a way to make my opponent lose 2 life a turn. I would say repeatedly, but proliferate (an instantly classic mechanic) takes over from there.

How perfect is Decimator Web here? For one, I've been waiting for it to show up in a Lab blueprint for a while now. (Fun fact: I have no free will.) For two, it's incredibly synergistic in this deck skeleton. It repeatedly causes a life loss of 2 (a requirement of the deck), gives a poison counter to my opponent (which proliferate can jump right on), and mills six (which Mindcrank loves to see.)

Another awesome add was Grindclock, which feeds both the milling and proliferate strategies. Also, I wholeheartedly endorse the NOUNVERB / VERBNOUN one-word style of naming cards. Finally, I usually like to mesh utility cards with deck aims, and here I noticed that Hideous End is both fine removal and worth a quest counter. Sign in Blood is great card draw as well. Near the end of the process, I decided Geth, Lord of the Vault was a fun alternate win condition that fit in well enough. All together, we've got a lovely but brutal Standard-legal mono-black milling deck. (I like adjectives.)

2 Geth, Lord of the Vault

I love it when I hit all five colors without meaning to! Until next time. 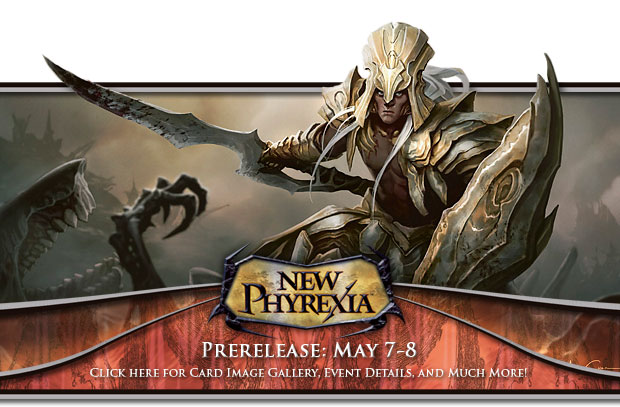