ey gang, and welcome back to the Lab! Today we're discussing all things metalcraft, the popular ability word from Scars of Mirrodin. Whenever the current week's theme is one of the latest abilities or mechanics, I like to think about that mechanic in a general sense. For example, metalcraft seems to be Scars's answer to affinity, from the original Mirrodin set, though of course dialed down a bit. It also has a fixed number of artifacts required to activate it (three), similar to mechanics such as threshold (seven cards in the graveyard) and conspire (two creatures.) (Check out Monday's Making Magic for more on the nitty-gritty of metalcraft's design.) Whoa, now I want to build an unwieldly threshold + conspire + metalcraft deck!

As exciting as that would be though, today's decks are mostly all about metalcraft. Mostly. Near the end I'll be discussing a highly buzzed about card (judging by my inbox, or mailbag) that doesn't have metalcraft, but can instantly activate it. Okay, so I'm just looking for an out to deliver Precursor Golem combos ... sue me. But first, we've got some metals to craft! Let's start with one of the Johnnier metalcraft cards out there, Molten Psyche.

I'm not exactly sure what's going on in the art for Molten Psyche, but something (particularly the molten lava bursting from various veins) tells me it's not good. Regardless, this is a fun looking card with two great abilities that mesh perfectly. First up is the Winds of Change ability, which will happen regardless of metalcraft. Refreshing your hand (and forcing your opponent to do the same) has always been a devious trick. However, with a Cerebral Vortex tacked on (hence my sub header), you're potentially dealing 6 or 7 damage to each opponent along with that. It's like an Inferno for hands. 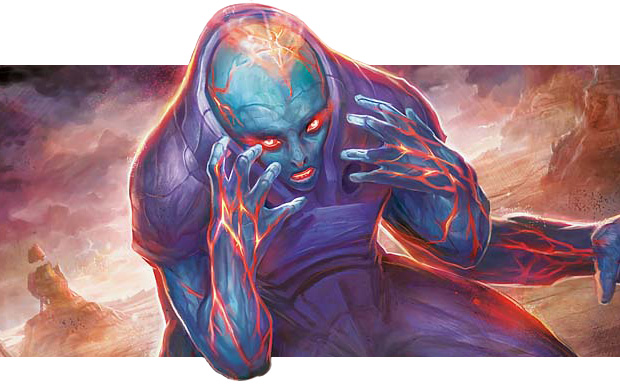 There are many ways to tackle Molten Psyche in terms of deck building. Assuming we have metalcraft, we're going to want to amp the damage as much as possible. That means (a la numerous Cerebral Vortex strategies) we'll need some forced global card-draw. Jace Beleran can use his +2 ability for once here, adding a point of damage for free. Temple Bell does the same thing while being an artifact! Chandra Ablaze offers a variation of Winds of Change herself. Time Reversal is bonkers anyway, and if you can get to eight mana, a follow up Molten Psyche would gouge into your opponent's life total.

Of course, we'll need some artifacts in the first place. I thought Runed Servitor would be perfect: It's underused, it's an artifact creature that forces card draw, and it's just so lovable (kind of ... ). Everflowing Chalice accelerates my mana, as do the two appropriate Myr (Iron and Silver). Steel Overseer gives your opponent something to worry about in the early game and is an alternate win condition. Gradually pumping up your Myr and Etched Champion (theme bell!) seems like a good way to break a stalemate.

Another way to break Molten Psyche is by straight up copying it. The new Fork, Reverberate, should come in handy here, but the wacky comes with Pyromancer Ascension. Already a perfect match for Chandra Ablaze, the Ascension allows free copies of any instant or sorcery you play. This could be Molten Psyche, or Galvanic Blast (ring that theme bell!) or Runeflare Trap! Of course, it's tricky to add those quest counters, but that's where centerpiece Contagion Clasp comes in! Let's count the ways this card helps: It's an artifact, it kills important low toughness creatures, and it powers up Jace, Chandra, Everflowing Chalice, Steel Overseer, and the Ascension. Whoa.

Here's the resulting pulp when you cram all these ideas into a blender. A Magic blender. Metalcraft smoke ... don't breathe this! (Yeah, that meme has been dead for years. Let me mourn in peace!)

There are loads of ways to reshape this deck using older cards. Obviously Cerebral Vortex itself would be a welcome addition. Putting Molten Psyche on a Spellweaver Helix sounds really fun. Wheel of Fate and Whirlpool Warrior would be two great ways to amp up the Psyche/Vortex damage. If you stick with the Pyromancer Ascension route, Burning Inquiry would be perfect.

Now let's swing over to the other side of the spectrum. The side that prefers to just beat your opponent down as fast (and as stylishly) as possible. During my scan of the available metalcraft cards, I noticed that many of them were cheap weenies that could easily turn into mega-beats. Naturally I followed this idea, beginning with the spunky Memnite. My big inspirations were the two-cost trio of Carapace Forger, Auriok Sunchaser, and Auriok Edgewright. Etched Champion (also used in the above deck) is perfect as a fully protected artifact beater. I wanted to add Equipment to the deck, to both pump my weenies up and boost my metalcraft count. To that end, Darksteel Axe and Strider Harness made the deck. 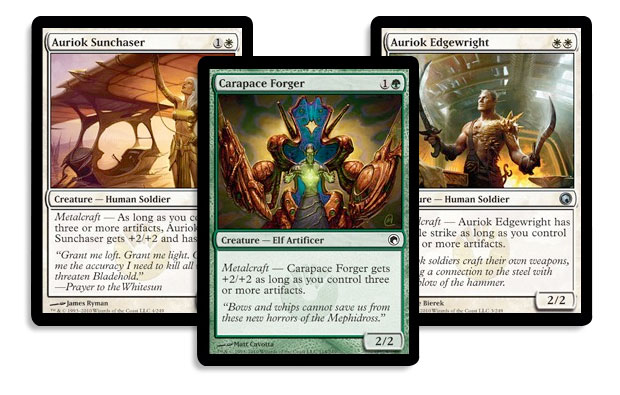 Each color in Scars of Mirrodin has a real badass metalcraft creature, and in white's case, it's Indomitable Archangel. This Angel is amazing. Once you plop that third artifact on your side of the battlefield, the Angel becomes like an artifact Pariah: Any removal has to go through her first. And that's why she and Liquimetal Coating make a great pair. Target your Angel with the Coating and you've effectively given her shroud as well! The Coating is amazing anyway, as it eases the metalcraft requirement. Short an artifact? Just spread some of that gooey Liquimetal on one of your lands, and go to town. 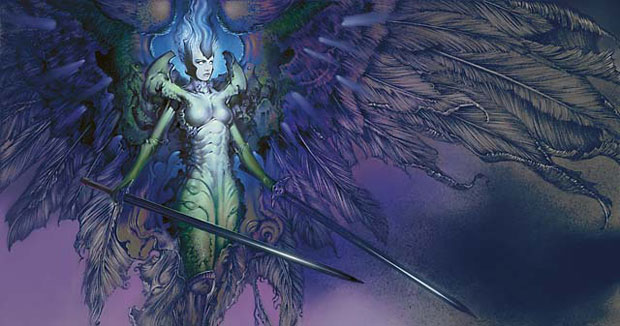 As for green, Ezuri's Brigade suitably brings up the rear. An 8/8 trampler for four is just too good to pass up. Green also brings the flexible Sylvok Replica to provide an artifact, little beats, and a delicious removal effect. 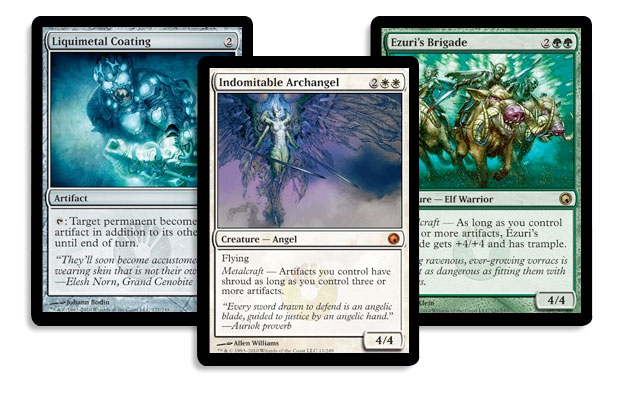 My favorite off beat card in the deck, though, is Mimic Vat. I was looking for an interesting artifact that could contribute to a beatdown strategy, and the Vat provides an ingenious outlet for my fallen weenies. Making hasty copies of Auriok Edgewright is amazing, and making hasty copies of Ezuri's Brigade is just broken.

Alright, we've come to the Golem(s) that everyone around my inbox has been buzzing about for a while now. Here are the best reader submitted emails about this new casual favorite. 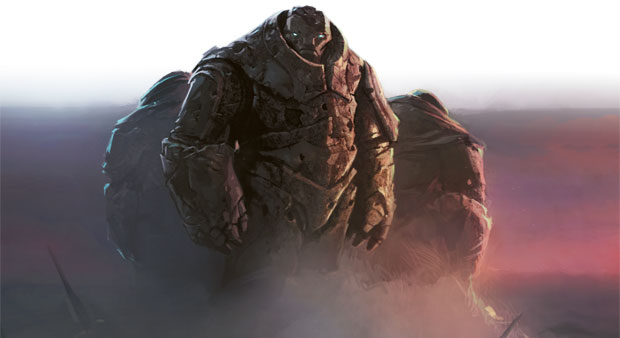 Abbott Veldhuizen of course had an offbeat idea about Precursor Golem. Here's his deck and explanation:

"Precursor Golem copies your spells for free! This is absolutely insane, and I wanted to create a deck that could capitalize on the Golem's ability without sacrificing consistency or raw power. Going with a beatdown strategy seemed to be my best bet; but don't get the idea, just because I'm running boring cards such as Colossal Might, that crazy things can't happen! If you do, Soul's Fire and Heat Shimmer would like to have a word with you."

Terrifying! Distortion Strike in particular is a beating. I didn't change Abbott's deck at all, but if I could, I might add another fun beater as a two-of to also cast Heat Shimmer or the exciting pump spells on, such as Siege-Gang Commander or even Conquering Manticore. Also, it's worth noting that Soul's Fire doesn't quite do what Abbott wants, because it targets something besides the single Golem.

Jacob McCullar also emailed me about the Rite of Replication trick, but amped it further with Conspiracy. As he says:

"What would be truly hysterical would be to have Precursor Golem on the board with a Conspiracy on the board naming Golem as the creature type. Now, a Path to Exile or Unsummon at this point would be ... uh ... devastating, so you have to play defense on some level. Vines of Vastwood, or Asceticism or Privileged Position would be good includes.

But just imagine a Rite of Replication in that context. Or a kicked Vines of Vastwood, or Distortion Strike. 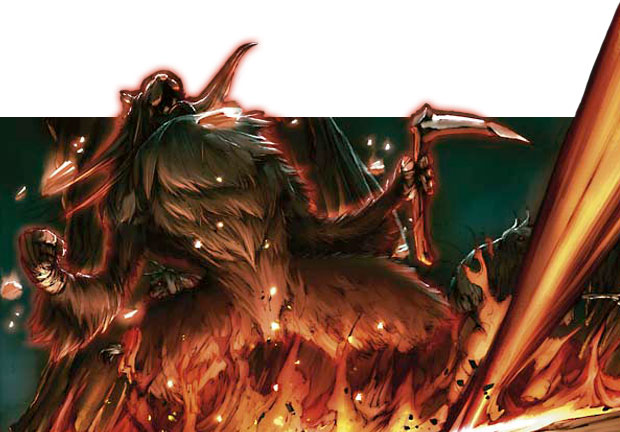 "There are many ways to take advantage of Precursor Golem's ability. One of my favorite ideas is to use splice. If you splice a Kodama's Might or Blessed Breath onto any untargeted Arcane spell, you can have three copies of your spell while making your Golems bigger or protecting them from removal. Peer Through Depths and Desperate Ritual give you cards and mana, respectively, to fuel splice shenanigans. Path of Anger's Flame is the finisher—three copies of it give +6/+0 to all of your Golems as well as your Spiritual Visit tokens. Since we're already playing lots of colors, I threw in Ink-Treader Nephilim, which (along with Spiritual Visit tokens) gives the deck some redundancy. There are many ways to build this deck."

That's it for this week! Tune in next time, where the contest results from about a month ago are revealed!