xcuse that blight of a title. When the dog days of summer get to me like they are currently, I tend to be irritable and bored. Oh sorry, I'm supposed to fall into my usual programming and welcome everyone back to the column. My bad. I enjoy breaking in and out of this Magical Matrix. You would too, if you were the One. (PS: Flying is awesome.)

Welcome back to the Lab, ladies and gents. This week it appears to be none other than Core Set Week—an apt choice, considering Magic 2012 was unleashed to the public quite recently.

With such a wide palette to choose from today, I thought I'd start out by delivering a slight history lesson, something I'm prone to doing from time to time. Only four years ago, Magic was radically different. There were no such things as planeswalkers or mythic rares or core sets with new material. Back in my day, mana was so wild and primal that it hurt you occasionally! Those were the days.

Now, though, Magic has gone through a sudden warp and emerged from the other side as a sleek (or sleeker) machine with the same game mechanics nestled within. In other words, a reboot. I certainly don't imply any heavy negative connotations here. Only light ones. Reboots are great when implemented effectively (example: Casino Royale). However, too much rotating of the formula can knock the rebooted subject off of its new hinges (in a bad way; example: Quantum of Solace). While the next Bond movie still exists only in the Infinite (and it better deliver, but no pressure), I'm happy to say that Magic has for the most part continued on a steady and fun course. 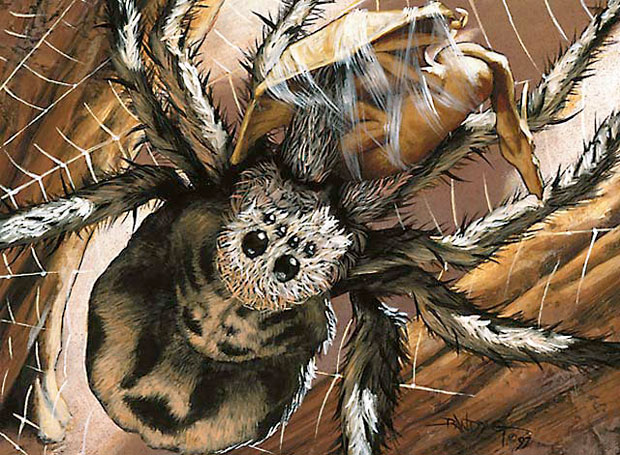 Of course, Magic has gone through many changes and evolutions. In many ways, it's never finished. Through all the core sets in the game's entire history, though, one card has outlasted the rest of the pack. I speak of course of Giant Spider, dubbed the "Core Set Survivor." This simple green 2/4 with reach for four has been hyped up a ton by Wizards and has gone through the talk show gauntlet. It's a great underdog story (make that underspider story), rivaling even the Hoosiers. Giant Growth was the rival, the clearly favored opponent. Then... Arachnus Spinner suddenly exists! Spiders are needed! And Giant Spider buries the jump shot to win the showdown. 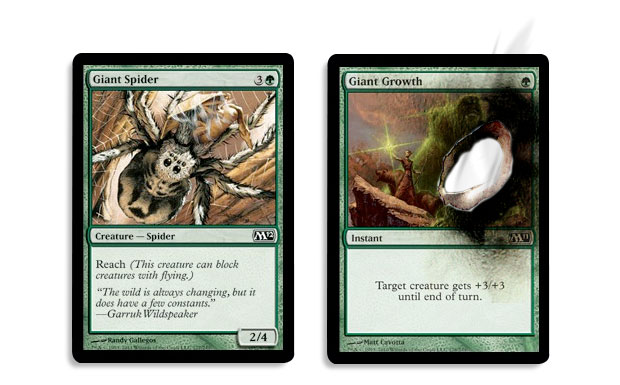 Whew, a long introduction. Still, I managed to reference core sets in general with it. Now I can segue into my decks, all of which make use of a clever Magic 2012 card. I'm pretty sure this is my plan for the next couple of weeks, so let's saddle forth! (Or sally up.)

Seriously. Now that Lord of the Unreal exists, Illusions everywhere must be used. I almost demand it. This is a tribal lord that can give every creature you control hexproof! I can barely believe it. Of course, this amazing bonus goes only to Illusions, a sly wink if I've ever seen one. You see, Illusions commonly have the unfortunate drawback of fading into the æther whenever they are targeted. It's like they weren't even there!! Lord of the Unreal spices up any Illusion deck, and has some Inception-worthy flavor text to boot. 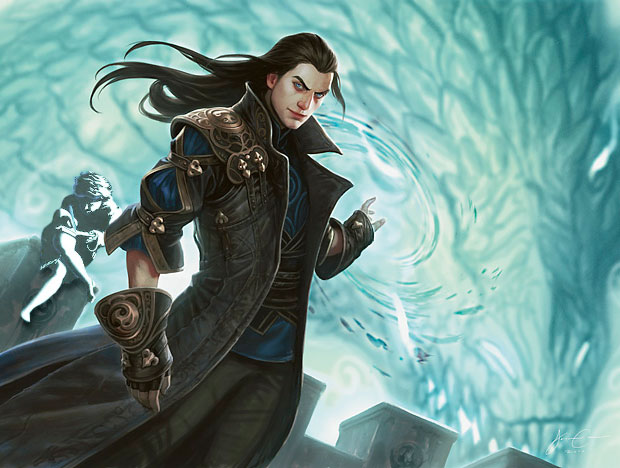 Believe it or not, Illusions had a previously existing tribal benefactor of sorts, in the cloudy form of Krovikan Mist. For however many Illusions you control, the Mist is that big and scary. Now that they all have hexproof (including your big flyer), the Mist is even bigger and scarier.

Where does the rest of our Illusion corps come from? Phantasmal Bear is a 2/2 for one, an always eyebrow raising type of card. Follow up with a Lord of the Unreal and get bashing. Æther Figment is nice and versatile, either hitting early and light or late and heavy. Phantasmal Image had me gasping. Just when I thought Phyrexian Metamorph had obsoleted Clone, this Illusion comes along and costs two mana! Of course, there's that drawback, but Lord of the Unreal keeps it safe. Shaper Parasite is some wonky creature removal. Riftwing Cloudskate can be suspended early for a creature bouncing later. And Chronozoa, also an Illusion, is a weird vanishing amoeba that splits into two copies of itself once its time counters run out.

Three Adaptive Automatons round out the deck as back-up lords, and since I knew I also wanted a Runed Stalactite (to attach to Lord of the Unreal for laughs), I ran some Fabricates and some other fun singletons. Lands round out the deck.

Despite popular sentiment, people generally tend to invade the personal space of others. How do you think we got this far as a race? Hmm... I've already alienated half my readership with that joke. Let's go for the other half: Why the hell doesn't mine get invaded? There we go, I'm alone. Still. 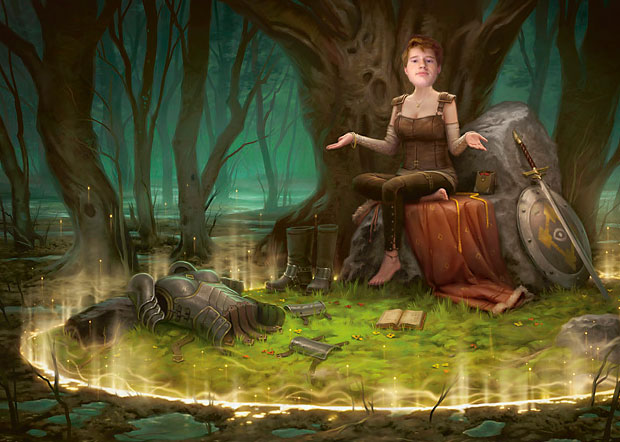 Ahem... Moving on to Personal Sanctuary. I love the flavor here. Your turn is literally your personal safe place, where you're protected. Personal Sanctuary carries the text, "During your turn, prevent all damage that would be dealt to you." Of course, damage is mostly dealt to players during their opponent's turn, be it through combat or other means. But I think I can swing it so damage heads my way on my turn.

This path naturally led me to red, one of the more self-destructive colors. Goblin Artillery and Earthquake both deal loads of damage to myself and others (and they both exist in core sets, so I get to ring the theme bell). Sparksmith likes to see other Goblins around as well. Thus I worked an aggressive Goblin slant into the deck, with Goblin Chieftain and company. Another white enchantment that then slid in was Mark of Asylum. I didn't want my Earthquakes and Sulfurous Blasts and such things destroying my Goblins as well.

Pretty straightforward, I suppose, if a red and white Goblin slash damage prevention deck qualifies as straightforward. I added some other red cards that hurt me for a good cause, like Volcano Hellion and Heartless Hidetsugu.

Thethreeartifacts that make up the Empire's Toolkit (as I now apparently call it) come from a long line of cards that reference other cards by name. When you control all of them at once, something really special can happen! It's that kind of awe that (I think) the Magic 2012 designers wanted to invoke in the core set, the set designed (in part) for the new player. Other triads of cards that achieve this, just because I like being a Magical know-it-all (not really, I just have access to Gatherer. What? You do too!?), include theUrzatron, theKaldraEquipment from Mirrodin Block, Sift Through Sands and the othertwo matching Arcane spells from Kamigawa (which lead into The Unspeakable), and thethreeNightstalkers of Mirage Block (which can team up to find Spirit of the Night.) 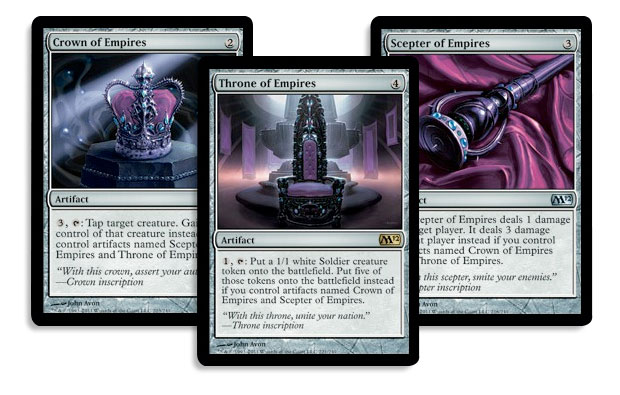 So let's take a gander at these Empirical artifacts, shall we? Of them all, the most interesting to me is Throne of Empires. That's five 1/1 tokens for one mana and a tap, assuming I've assembled the trio. That seems worthy of abuse. Obviously I'd like to untap it a bunch of times. Voltaic Key is quick and easy, but sadly finite. (It'll still make the deck.) For infinite Soldier tokens, I'll go with Clock of Omens. Tap any two untapped artifacts you control to untap the Throne. If only the Soldiers were artifacts... ah, Mycosynth Lattice, saving the day again.

Produce five metallic Soldiers with the Throne. Use two to untap the Throne with the Clock. Use two others to untap an Everflowing Chalice. Lather, rinse, repeat.

Of course, it's hard enough sticking three artifacts on the board, let alone five or six. Fabricate returns to tutor up everything I need, and Gold and Silver Myrs run amok within the list. Once you assemble the key trio, then worry about finding the Clock and the Lattice. Crown of Empires actually helps you play defense for a bit while you set up. A full set of Day of Judgments can stave off any creature heavy decks. Try not to kill your own Leonin Abunas if possible. The lone Silverskin Armor is for the Abunas, so it hexproofs itself as well.

The Empire Strikes Back