elcome back to the Lab. Return to Ravnica previews! All right! But first, some quick thoughts on death.

We are all in the presence of death, living up until the firm experience. Death blankets life, spreads over and through it, tunneling a path to a nowhere. We witness the rigidity of death from various distances without fully understanding. We only die when we live, or, as Metallica put it, "To Live Is to Die."

I'm sure that reading my amateurish philosophic droppings (gleaned from many Metallica records) is entertaining and all, but I do have a preview to unveil. Recognize (and dare I say it, embrace) .

If the Golgari ever recorded a thrash metal album, I would be beside myself. As Death's Presence can aptly demonstrate, the black and green guild that lurks in Ravnica's dungy greenhouses and rotten pastures knows how to channel the atmospheric force that is death into various forms of aggression and power. In the past, the guild was adept at stuffing the graveyard, using the head-twisting mechanic known as dredge that went on to enable, oh, decks to win the game on the first turn without spending a drop of mana. This time around, the Golgari seem to be content with scuttling and scavenging, as revealed by the likable Dreg Mangler. 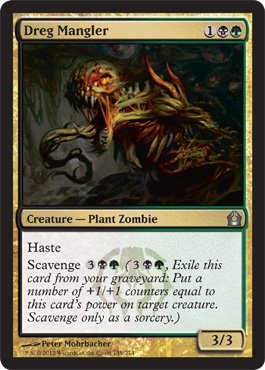 So it makes perfect sense that Death's Presence is tinged with a bit of Golgari flavor. But whether you are battling on Ravnica or not, this enchantment can definitely tip the scales in your favor. It bears many of the hallmarks of a classic Johnny card: it hinges upon a death trigger that happily recognizes the death of tokens as well, and it is costed at a slightly expensive level to prevent shenanigans from blasting off too early in the game. Of course, there are ways around everything. But Death's Presence is a welcome piece of my revolving combo card complex, and I'd like to show off some of the many deck skeletons that incorporate it. 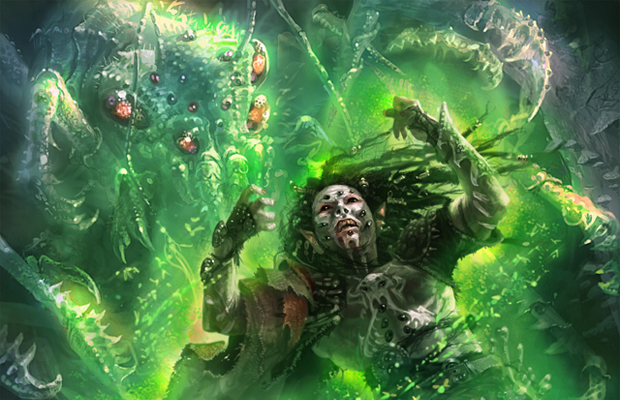 Death's Presence is a straightforward card that obviously wants to see lots of your creatures die. Not of all them, of course, since you need a body to stack your many +1/+1 counters on. Preferably an evasive or sturdy body. The enchantment also increases in value when your dying creatures have somewhat high power. Again, this is pretty evident, but I find it useful to use sentences to slosh the card's potential around in my head.

The most obstructive barrier to using this card is, as mentioned previously, its cost. Six mana ain't cheap, but with a bit of ramp, you can easily drop it on turn five or even four. My first card pairing suggestion follows these lines of mana acceleration: Fertilid! At its worst, Fertilid will oust itself and leave two fresh basic lands in its midst, but in a late-game scenario, Death's Presence can stock up the Fertilid with lots of counters to either remove for more lands or embolden an attack.

Fertilid led me to consider other Elementals, specifically those with both high power and a low casting cost. Nova Chaser was a good first inclusion. A 10/2 for four is snazzy, and with a Death's Presence out, it can attack without worry. But things get really wacky with Force of Savagery. One of the weirder cards out there (of course it was printed in Future Sight), the Force will die instantly upon hitting the battlefield and load up another creature with eight +1/+1 counters!

I used Flamekin Harbinger to find all my Elementals and Smokebraider to accelerate them out. The evoking Elementals were perfect fits—such as Spitebellows, a scalding bit of removal with 6 power. The singletons Walker of the Grove and Glarewielder help in various ways, too, as the former has 7 power and can evoke for five for a 4/4 Elemental token, and the latter can push some potential blockers aside for your giant counter-laden creature to rumble in for massive damage.

Some other Elementals made the deck, such as Ashling the Pilgrim, which in deathly circumstances can be a fiery reset button. Sunflare Shaman is an early piece of removal that sends itself to the graveyard. Sparkspitter is a fun singleton that can discard excess Death's Presences or other junk in hand for a Spark Elemental token. But my favorite Elemental I found a home for is Thornling. Maligned for its jarringly bulbous nose and non-symmetrical art (see: Morphling and Torchling), Thornling nonetheless is a powerhouse here. Haste is kind of nice, but trample and especially indestructibility at the flick of a Forest make Thornling the ideal target for all those +1/+1 counters. And in a pinch, you can activate Thornling's fourth ability four times for a pseudo Force of Savagery, which makes me giggle.

1 Walker of the Grove
37 Cards


Even though Death's Presence isn't an early-game drop, I wondered what its effect would be on a traditional aggro deck. If I kept casting a bunch of efficiently powered creatures and attacking, a late-game Presence could swing things my way.

I also wanted to create a situation in which I drop Death's Presence and then immediately sacrifice something to trigger it. After some searching, I rediscovered Ravenous Baloth, and the Beasts poured in. I've been having lots of fun with Thragtusk this summer, and the fun continues here. Garruk's Companion and Leatherback Baloth bring some oomph to the early game. Valley Rannet can find basic lands, and it's a 6/3 body.

I combed Gatherer for obscure Beasts and found one in Shivan Wumpus. It's a trampling 6/6 for four, and its "drawback" sets your opponent back a land, which can be vital in the early game. I've been on a Greater Gargadon kick lately, and for good reasons. The 9/7 Beast suspends for a mere

, and it can trigger Death's Presence at will by sacrificing my other creatures. Finally, the long-forgotten Spearbreaker Behemoth rears its durable head to protect virtually all my creatures.

The last two additions were some Starstorms (a techy board wipe that cycles) and Garruk Wildspeaker. Garruk 1.0 can ramp right into a Death's Presence, and his Beast and Overrun tendencies are welcome in this list.


Finally, I wanted to tap into the power of the infinite using Death's Presence. Inspired by Fertilid (which I am, daily) I searched for other creatures that could remove +1/+1 counters for a helpful effect. I found my second piece in Mindless Automaton. If Solemn Simulacrum is the "Sad Robot," the Automaton sure is the Mad one. Removing two +1/+1 counters can allow me to draw a card.

However, what if that draw... was a Bear! Stay with me. If I pay one to activate Words of Wilding, I'll get a 2/2 token instead. Mmm, Life, and with that inevitably comes Death. If I speed up the process (or bring it to its preordained end, whichever you prefer) with Ashnod's Altar, I'll make two mana and restore two +1/+1 counters to the Automaton. Infinite mana is the result, which funnels into Helix Pinnacle for the win.

How to survive and find my combo pieces? Compulsive Research and Drift of Phantasms can certainly dig. Moment's Peace can stall incoming attackers, and Into the Roil is a whippy bounce spell. Dawntreader Elk, meanwhile, finally gets the call over Sakura-Tribe Elder.

4 Moment's Peace 4 Into the Roil

4 Drift of Phantasms 4 Compulsive Research 4 Into the Roil


Join me next week for another Return to Ravnica preview! Until then.