elcome back to the Lab once again, to newcomers and old Johnnies alike! This week we've got another of those bland non-theme weeks. I always struggle to come up with a miniature theme of my own during these weeks. Sometimes I'll randomly pull something interesting from a hat and chat about that for a while, wait until I cross the line with a joke, and then awkwardly transition to the rest of the column. Other times, like today, I'll fall back on discussing the weather.

It's that perfect blend of the coldness of the coming winter with the last soothing dregs of sunshine. I refer to such states as 'crisp', which is a great word and should be used more. Completing my metaphor, today I'll be building around some similar rare cards from Scars of Mirrodin that have simply been overlooked in the face of the popular crowd. I promised you all a Kemba, Kha Regent deck last week during Infect Week (which, by the way, seemed well received, judging from the amount of infect related ideas in my inbox.) Myr Reservoir is a kooky tribe-oriented card that follows in the footsteps of cards like Smokebraider and Scarecrone. Finally, Dissipation Field has been begging for some Johnny to come along and use it, and I'd be happy to oblige.

Personally, I love the feeling of defeating cold through a bunch of sweatshirts and the like, so let's get cracking! Pull on some warm layers and let's enter the crisp world of the reject rare.

New Kha on the Block

In the block, actually. Scars of Mirrodin has a lot of cards that are super secret homage to cards from the original Mirrodin set. The new leader of Mirrodin's leonin happens to be Kemba, Kha Regent. Her flavor text references a mysterious Raksha as the previous leader of the white oriented cat people. Sure enough, Raksha Golden Cub was a force for all Cat decks back in the day, and it's no secret that both legendary Cats had an affinity for Equipment. 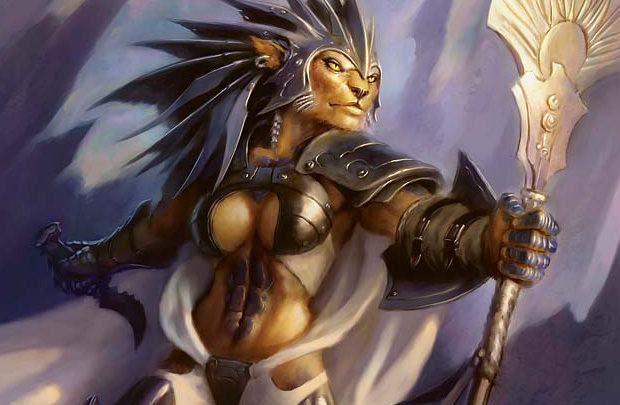 Cards like Kemba make me smile, because upon reading them I immediately want to go beyond making a mere one or two Cat tokens per turn. I'd, ideally, like to have Kemba make at least three or four. This is a tricky goal, but sometimes setting tricky goals makes for an interesting final deck. 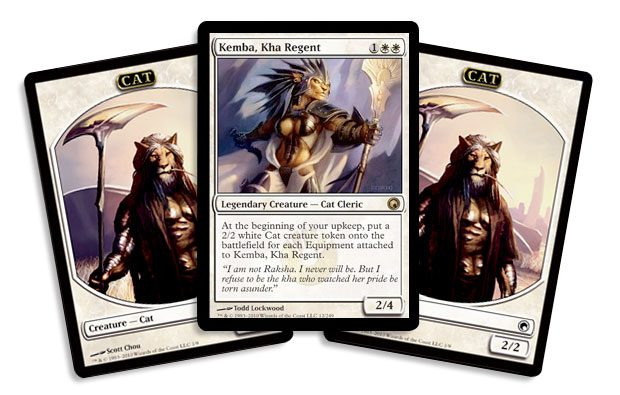 So, of course, we will need a ton of Equipment, preferably ones that are cheap enough to attach to Kemba by, oh, turn four. In selecting my Equipment, I decided not to go all out with the ultra offensive weapons. (Boring!) My first selection was Lightning Greaves. It's super cheap (with a free equip cost to boot) and gives Kemba the all-important shroud, since having an opponent simply Doom Blade your heavily armed Kha Regent is no fun. Of course, you can't further equip things to Kemba while she has shroud. I suggest moving the Greaves onto another creature (how about the Cat token that you just made?), equipping Kemba normally, and then moving the Greaves back onto Kemba. That zero equip cost sure is handy.

Since my goal is to equip one of my creatures with a bunch of Equipment, I thought I'd add some other creatures that would take advantage of it, as Kemba does. Namely, Loxodon Punisher and Armament Master. The latter cares about Kor, not Cats, but we can fix that by playing with Changelings and the all-important Shields of Velis Vel.

So what Equipment was born to attach itself to Kemba, Kha Regent? Konda's Banner. With both a mana cost and an equip cost of

, you can cast a turn-three Kemba and cast and equip the Banner on turn four. Since Kemba is legendary, the Banner will offer a double Anthem to all her Cat token spawn.

The deck fills itself out from there. Cats and Kor alike populate it with creatures to give your various weapons. Stoneforge Mystic in particular is pretty important, fetching up your Equipment and popping them onto the battlefield.

That deck could probably be tuned more. I tried to balance between Cats and Kor, as well as creatures and Equipment. Really though, just equip stuff to Kemba. That alone gives me good reason to have fun with this deck.

For All Your Myr Needs

Like I mentioned above, Myr Reservoir slides perfectly into that niche of Myr-related cards that aren't actually Myr. The original Mirrodin block had a couple of these cards: Myr Incubator, and the classic Myr Matrix. Myr Reservoir is perhaps the best of them all from a purely Myr-casting point of view, since it provides Myr specific mana and can return Myr cards to your hand from the graveyard. 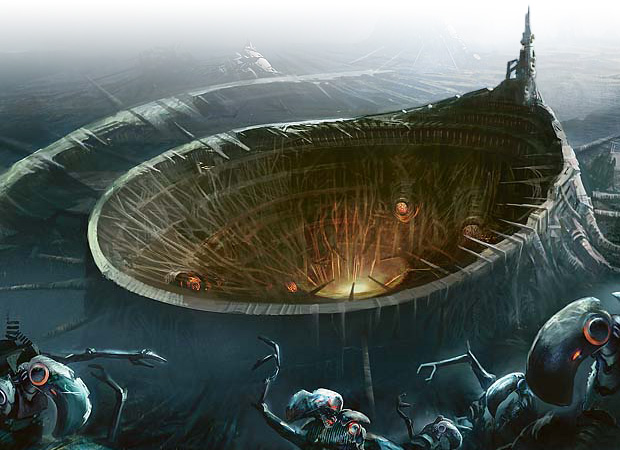 Myr themselves are cool little things, and I've felt this way since they were first released. The reprinting of the original common cycle of mana Myr in Scars was a brilliant move, and I can't wait to see how these adorable robo-roaches are expanded upon in Mirrodin Besieged. The new ones we got in Scars are pretty nifty as well. In fact here's a combo that some of you may have figured out already: Palladium Myr + two Myr Galvanizers. Since the Galvanizers can untap all your other Myr for

and a tap, two of them can infinitely untap all your Myr as long as you have enough mana. Fortunately, Palladium Myr can tap for

, giving you infinite mana and Myr untaps. Just tap it between each Galvanizer activation to make the combo work correctly.

With that infinite mana and infinite Myr untaps, you could also make infinite Myr with Myr Propagator. You also get infinite charge counters on an artifact courtesy of Coretapper. There are multiple ways to take advantage of this, but since we can win other ways, I'll choose Culling Dais. The Dais is good in the early game anyway with your various Myr, and Myr Reservoir can bring these little Myr back for more sacrificing. Later on in the game, you can fix an empty hand by breaking the Dais. Perfect! 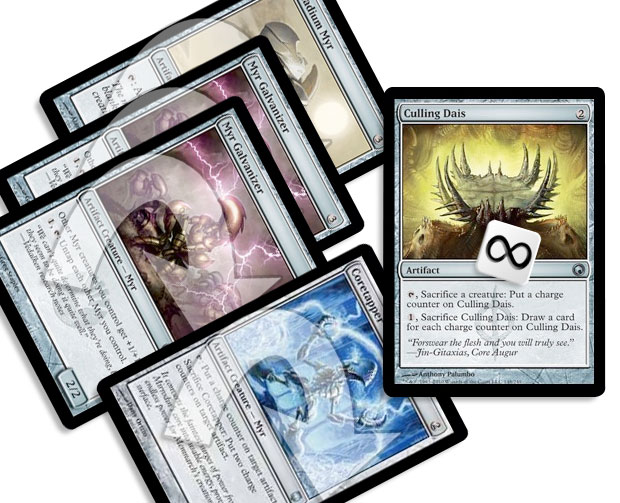 You can win by swinging with Myr, infinite or not. Don't forget the Galvanizer is also a Myr global booster! The infinite colorless mana can go into a Mirror Entity. Oh boy.

You'll notice Myrsmith and Crib Swap in there as well. With all your recursion and extra mana, Myrsmith should be perfect. Crib Swap, on the other hand, is a good removal spell that (gasp!) can be brought back with Myr Reservoir! This idea actually comes from Abbott Veldhuizen through email. He brought up the notion of recurring changeling spells such as Crib Swap, Nameless Inversion, and Mirror Entity.

In the Entity's case, Abbott notes, "Mirror Entity, always a frightening threat, is suddenly immortal—and you can use the Reservoir's mana ability to pump for an extra two with Entity! How cool is that?"

Dissipation Field looks, to me, like a classic Johnny enchantment. Posing as an effective card that bounces incoming attackers, the Field really is a manaless way to bounce creatures as long as they deal damage to you. When I was searching for creatures to use with the Field, I looked for effects that dealt damage to each player. That way, you've done some positive damage while bouncing your guy. 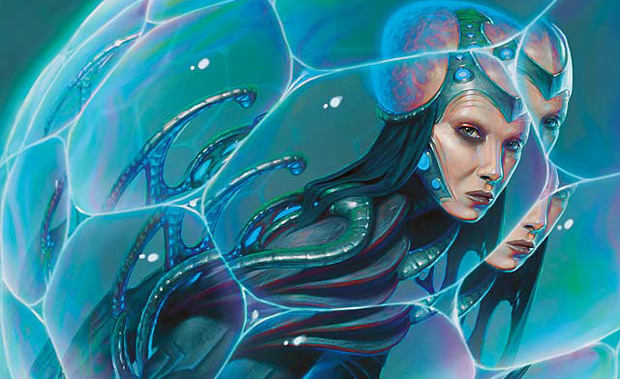 I came up with two potential creatures to be Dissipated over and over. Magma Giant was cool, but a little pricy. Cloudthresher, though, was perfect. First of all, it has flash, meaning you could theoretically cast, bounce, and recast the 'Thresher on the end of the opponent's turn. Secondly, it has evoke, which allows you to cast the 'Thresher for a lower price while still successfully bouncing it. This works: When you cast a creature with evoke, two abilities go on the stack, the "sacrifice me!" ability and the "enters the battlefield" ability. Stack Cloudthresher so the "sacrifice me!" happens last, meaning the "2 damage to each creature with flying and each player" happens first. Let that resolve. Since you dealt damage to yourself, Dissipation Field will trigger, with the "sacrifice me" still waiting to resolve. When the Field's ability resolves, the Cloudthresher will be safe in your hand by the time the evoke ability wants to sacrifice it.

: 2 damage to each creature with flying and each player. I'm going to add a slight life gain subtheme to keep my life total afloat. Cloudthresher's power is 7, which bodes well for the various Naya cards that like it when I cast a creature with power 5 or greater. Paleoloth and Cloudthresher are sick all by themselves: Just evoke two 'Threshers back and forth, with the Paleoloth bringing each one back. And every time you do this, Mycoid Shepherd gains you 5 life. Perfect.

is kind of a lot to pay over and over. I'll reduce this cost with Helm of Awakening. Now your 'Threshers could be

to evoke. Helm of Awakening does reduce your opponent's spells as well, which is slightly annoying, but I'll counter this with, well, countermagic. After Dissipation Field bounces an attacker, your opponent will be glad to cast it post combat with a reduced cost. Nail it with an Essence Scatter (for

Other evokers seem good here, especially with Paleoloth. Two Walker of the Groves can evoke back and forth, creating more big guys. Another new self-sacrificing creature with power 5 or greater is Putrefax, which I somehow didn't discuss last week. Imagine casting one and using Paleoloth to recur another to your hand. WOW.

This deck is like a weird mix between 5 power creatures and Dissipation Field itself. It's fun to build these strange decks and find linking interactions!

1 Kiss of the Amesha 2 Nature's Spiral