elcome back to the Lab, that little pocket of cyber-connection that warmly blends into my daily mental affairs. This week carries no theme, but that's okay, for there are still a fair amount of Dark Ascension cards I haven't gotten to yet. And a decent sample of them (the subjects of today's article) happens to be green. And, seeing as blue is a color that lends itself to deck building with a flair for combos, today's decks are all green-blue. (It amuses me to stylize even my non-theme weeks. Rule #32: Enjoy the little things. Rule #117: Always pretend to be in Zombieland.)

I've been pondering all things teal or turquoise lately. To get more into the mindset, I read all about the Simic guild from Ravnica, the in-game representation of the two-color pair. The knowledge therein was enough for me to seriously entertain the notion of a shift in my personal color status from blue-red to green-blue. I haven't been feeling too red lately. Emotionally distant and whatnot.

Oh, and today's title is an actual anagram of "Dark Ascension." I came up with "Sardonic Sneakings" a few weeks ago, which was sort of cheating, so I took another stab at it.

Let's start with a blue puzzler from Dark Ascension, in accordance with my tendency to psych you all out. Call to the Kindred seemed instantly intriguing to me, pandering to my love of the top of the library and creature-type related things. And as a weird enchant-creature Aura, it automatically needs some deck-building love. 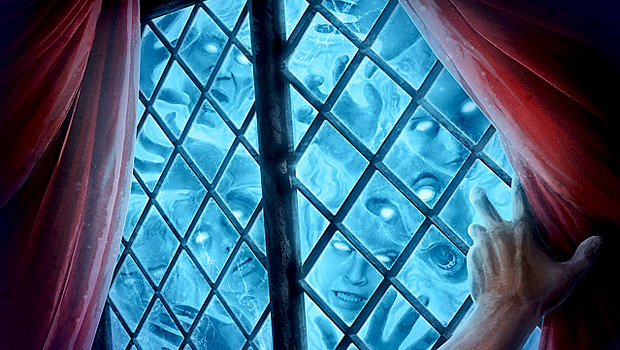 Call to the Kindred | Art by Jason A. Engle

On cue, someone emailed in the solution: Nest Invader. DAWWWWesome. Scott B wrote: "The ideal sequence of turns for the combo would go something like this. Turn One: Play an Island, then Ponder to be sure you don't draw an Emrakul, the Aeons Torn. Turn Two: Play a Forest, then cast a Nest Invader and put a Spawn token onto the battlefield. Turn Three: Play a land, tap out and then sacrifice the Spawn Token to cast Call to the Kindred on the Nest Invader. Turn Four: Call to the Kindred triggers, hopefully allowing you to cheat out Emrakul or some other Eldrazi bomb rare."

Emrakul, the Aeons Torn gets way too much attention in my book, so I'm going to go with "some other Eldrazi bomb rare." Such as...It That Betrays, which exists in the shadow of the titanic trio of mythic rares, yet is nonetheless insane. Sure, I'll take your sacrificed lands. They and the scads of Eldrazi Spawns should inch away at Spawnsire of Ulamog's mega ability. Having Emrakul, Ulamog, and Kozilek enter the battlefield at the same time from outside the game is way more artsy than just casting them one at a time from your hand. Boring.

Artisan of Kozilek can singlehandedly turn games around as well. And I was thrilled to find a home for, of all fatties, Hoverguard Sweepers. As a Drone, it'll heed the Call of Nest Invader or Kozilek's Predator and swoop in with devastating gusts.

I was looking for some exotic removal and found Volrath's Curse. The seemingly 'roided-up Arrest is weakened a bit by its sacrifice clause, but it's still effective at cramping your opponent's plans. And with It That Betrays out, the Curse can swing things around nicely. Finally, a singleton All Is Dust lurks within, waiting to demolish the world (with It That Betrays perhaps picking up the pieces or stealing all their colored permanents).

4 Growth Spasm 1 All Is Dust 4 Ponder

4 Kozilek's Predator 4 Call to the Kindred

Crazy Guy Who Lives In The Woods

Deranged Outcast strikes me as misunderstood. Perhaps it's just the kinship I sense within his name, but my urge to build around the weird tribal lord can wait no longer. See, what if he wasn't actually psychopathically slaughtering fellow humans? What if he was running around stepping on bugs in the forest instead??? 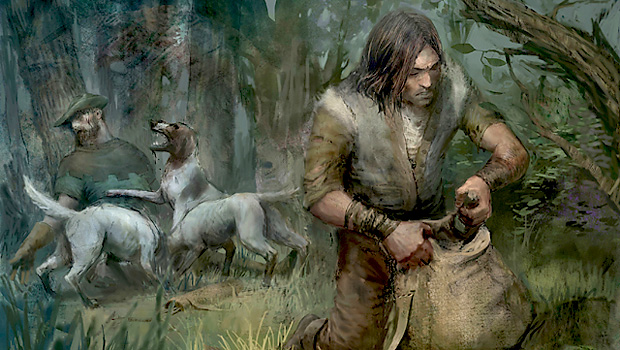 The shake-up comes with Artificial Evolution, that delightful bit of hackery. This creates a plethora of options, but I'm going to go with Saprolings, as there are plenty of solid producers of the 1/1s. The Thallid family (a shady crime network in Saproling parts) sent two helpful members, Utopia Mycon and Thallid Shell-Dweller, and Jade Mage was perfect as a Human to fall victim to a pre-hacked Outcast. In a green-blue shell, Æther Mutation seemed like a fitting and fun addition.

So what am I putting all of these +1/+1 counters on, anyway? How about, um, Mycoloth? Hitting the deck with a goliath splash, this devouring Fungus spits out a ton of Saprolings every upkeep. An amount equal to its +1/+1 counters, in fact. So a hacked Outcast could turn the Saprolings into twice the +1/+1 counters, put them on Mycoloth, which would then make even more. Eventually, either Mycoloth should get huge enough to swing (bearing some Fists of Ironwood, perhaps) or the swarm of Saprolings could charge in.

I figured I needed more Humans for Deranged Outcast to use. Yavimaya Elder stepped in as a helpful land fetcher who doesn't mind dying. Æther Adept stalls nicely. Finally, Cytoplast Manipulator seemed particularly interesting here. The Outcast can put +1/+1 counters on opponent's creatures as well, making them ripe targets for thievery. Adding graft to the deck reminded me of my prior Simic studying, and to that end I threw in some Plaxcaster Froglings. Although neither a Human nor a Saproling, this card is a beefy 3/3 for three that provides a helpful shroud for any of your bolstered creatures (protecting Mycoloth from removal is always a good idea.)

Anytime you see the roots of trees and the forest floor above you, you know you're astray. Either those travelers depicted on Lost in the Woods stumbled across some gravity-reversing tree branches, or they've just gone full-on isolated insane. What did they do, kick their only map into a river or something? 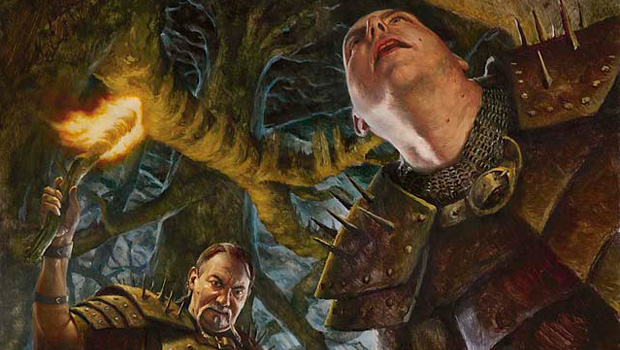 I was wondering how best to use this Foggy enchantment. One of my first ideas was Scouting Trek, to stack a bunch of basic Forests on top of my deck. From there, Words of Wilding could turn my draws into paws. Bear paws, specifically.

While wondering how to sort out the rest of the deck, I received an email from Abbott Veldhuizen, which contained an interaction around Lost in the Woods that I found way more exciting. (Feel free to take the above remnants in any direction you choose.) Abbott's idea revolves around a personal fave: Selective Memory, the key blue card of the deck. But lemme just hand over the mic:

Lost in the Woods is begging to completely lock down the combat step. Today, we're going to fulfill its dream.

Let's start with a little Selective Memory, one of my all-time favorite cards. That'll clear all of the pesky nonland cards of your deck! Resolve one of these bad boys, and you'll be flipping Forests until the cows go home (probably out of frustration). There's just one problem: at some point, you're going to draw those Forests.

The solution, and what makes this deck so deliciously Melvin, is Elfhame Sanctuary. This card is so stupidly perfect for this deck that I couldn't help but do a double-take when I saw it. With Elfhame Sanctuary out, you can keep your library perpetually filled with Forests: you won't draw them, and you won't put them into your hand. This has to do with the rules governing hidden zones: if I'm searching my library, since my opponent can't see it, I can claim anything I want about it—even something as absurd and obviously wrong as "I've failed to find a basic land in my deck." Elfhame Sanctuary lets me fix my mana pre-combo and keep my deck exactly the right size post-combo. It's too good to be true, frankly.

You'll find the list below. The deck's Plan A is to simply let opponents deck themselves. If that's not working out—say, your opponent is running a Psychic Possession deck—the singleton Squirrel Nest might do the trick eventually. Imperial Mask is a cool and underused anti-burn enchantment, and Copy Enchantment is occasionally very cute with Sterling Grove."

I like that the deck ultimately wins by either milling, aka driving your opponent über-paranoid bonkers, or Squirrel takeover (which should end in a Blair-Witch style story).

Hope you enjoyed! Until next time.