ello and welcome to the last new From the Lab of the year! The holiday season is about to be in full swing, and this website will likewise close for the holidays. Don't worry, though, I'll be carefully selecting two weeks' worth of reruns from the past year.

With the business end out of the way this early (how often does that happen?) I can dive right into the exciting theme of ... darksteel! I'm not exactly caught up on the flavor of this strange organic metallic material, but I do know that it has something to do with indestructibility. Just check out some choice cards from Scars of Mirrodin to see what I mean. Darksteel Axe and Darksteel Myr both carry the mysterious metal in their monikers.

Of course, many themes of Scars are also super sneaky homages to the past block of Mirrodin, the second set of which was actually titled Darksteel. This set, sadly, is known more in Magic lore for its extremely broken cards (Æther Vial, Skullclamp, Arcbound Ravager) than its cooler features. I'm here today to shine a well-deserved light on these cool pleasures from a set that's actually a pet favorite of mine. Although I began playing Magic during the era of Nemesis, I for some reason didn't start cracking a ton of packs until Mirrodin block, and I have fond memories of opening a ton of Darksteel packs, and rejoicing when my final one contained the mighty Darksteel Colossus.

So here's a look back at the quirkiness of Darksteel. I like looking back at cards from the past and combining them with modern cards, creating a combo that truly spans generations! That's a tagline right there.

Behind the brokenness, Darksteel actually had some quality Johnny rares. One of them is Well of Lost Dreams, which to me was the Holy Grail for all dedicated life-gain decks. A popular casual archetype around my kitchen table was the "dedicated life gain" deck, which my buddy Wes piloted to general irk. Whenever his hand was running low (a tendency in life gain decks) the Well could give him a little breathing room until his Test of Endurance or Ageless Entity (ring that theme bell!) got there. 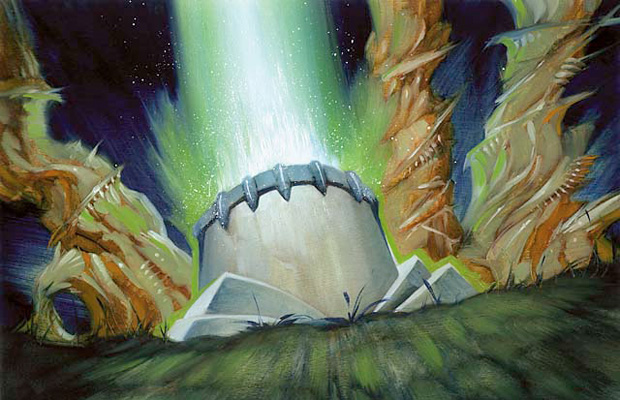 So, I'm a fan of Well of Lost Dreams. For some reason, I thought of it the first time I saw Vigil for the Lost. This nifty Scars enchantment gives you the opportunity to pay any amount of mana whenever one of your creatures kicks the bucket to gain that much life. Imagine having both the Well and the Vigil on the battlefield. If you had a ton of mana at your disposal, you could turn a simple sacrifice into a wellspring of cards and life!

Let's leave those ingredients in the pan while I move over to another fitting piece, located on this table. (Yes, I watch too much Food Network.) An interesting card that slyly caught my attention from the Scars previews was Glimmerpost. Some may have been surprised to learn that Glimmerpost, despite the indication of its ability, was the only Locus land in the set. 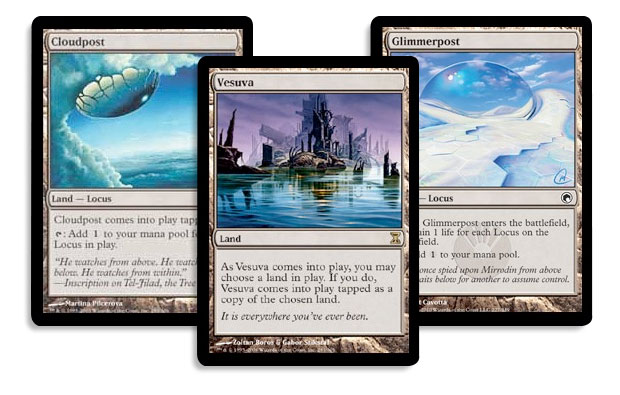 However, Cloudpost has been waiting for another Locus since its printing seven years ago. Of course, it found a temporary substitute in Vesuva (which will also make this deck), but finally, Cloudpost has another Locus land to be with. Together, of course, they make a ton of mana and a ton of life, which ties in perfectly with our two four-drops above. A landbase of eight Loci and four Vesuvas (among other lands) should appropriately fuel this deck.

So what creatures should I be sacrificing? How about creatures that sacrifice for land (Sakura-Tribe Elder) or life (Bottle Gnomes). I like Scarecrone here, as it's simultaneously a sacrificer and a returner of your various artifact creatures. The Scarecrow theme ushers in Grim Poppet, which somehow became instantly forgotten despite its decent popularity during Shadowmoor's heyday. All these colorless cards give me a great excuse to finally break out Ancient Stirrings, one of the cooler commons from Rise of the Eldrazi, in my opinion.

Well of Lost Dreams has had a best friend forever since its printing, Words of Worship. Mark Gottlieb first noted the interaction and I've been casually obsessed with it ever since. For anyone who likes lots of life and/or lots of cards, wheel that combo a couple of times.

All the interlocking cards got me so excited that I couldn't really find room for an actual win condition, funnily enough. Ageless Entity is on theme, but I'm sure there's something more fitting.

4 Vigil for the Lost 1 Skittering Invasion

Somehow, I forgot to mention Spellbinder during Imprint Week. (Or, I was secretly saving it this whole time for this week. Your call.) Either way, it's a very interesting card. It's an imprinting Equipment that lets you cast the imprinted instant card whenever you successfully hit your opponent with the equipped creature. 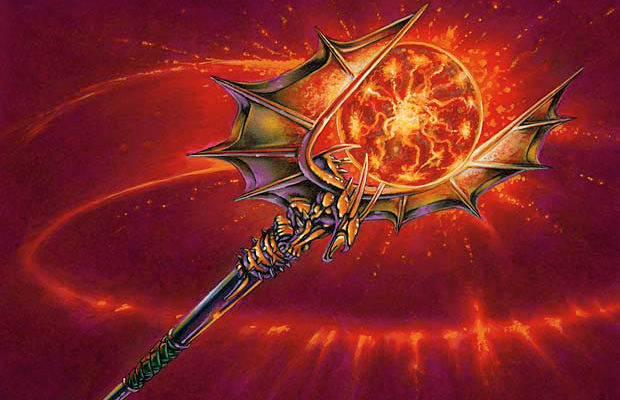 There are multiple routes to abusing this card, but I'll start with Savage Beating. One of the best-named cards around, imprinting this entwining instant on Spellbinder is an instant win combo. How? Like many of the "infinite combat phases" combos out there (which include, among other contemporaries, Hellkite Charger + Bear Umbra, Aggravated Assault + Nature's Will), a Beating 'Binder on an attacking unblocked creature will result in that creature being untapped for another go round. Don't be too frightened of the Savage Beating's combat-only clause ... since you're attacking already, it won't usually matter.

So, that's one interesting combo with the Spellbinder. Are there others? You bet your imprinting press there are. Not instantly game winning ones like above, but some generally modest interactions that, if nothing else, put a grin on my face. One fun thought experiment is to find a crazy expensive instant that I could theoretically cast every turn from turn four on. If I have an unblockable creature on turn two, I could cast Spellbinder on turn three and equip by turn four. Another avenue is an instant that forces something of my opponent's (a creature, or preferably a land) onto the top of his or her library. That way I enforce a sort of soft lock, as my opponent will constantly be drawing that card over and over again. And the earlier I do this, the better chance I have of achieving the lock.

These sorts of spells are generally blue, and unblockable creatures are generally blue, so it looks like I have my color combination. I was thinking of generally underused spells to put on the Binder and came up with the ripple spells from Coldsnap. While I always liked Surging Flame and the like, I was always bummed that even when I hit the jackpot and rippled into two or even three copies, the fun was over after that. No more ripple action. With a Surging Æther imprinted on the Spellbinder, though, you are free to ripple with every combat phase. Of course, to maximize this, I'd need to be shuffling my graveyard back into my library every so often. An instant like Mnemonic Nexus or the flexible Quest of Ancient Secrets could do the trick.

When I'm not returning lands to my opponent's hand, I suppose I'm straight-up destroying them. Not too many land destruction spells have found their way onto instants, but Fissure and Rain of Rust somehow slipped through the cracks.

Ahh, the Lich. Beginning with the actual thing (Lich) and progressing in various forms throughout the years (Nefarious Lich, and Lich's Mirror—for which I have a certain fondness) Liches have been a slow but steady part of Magic. There are even a couple of Lich Lords! Dralnu, Lich Lord for one, and the unnamed Lich Lord of Unx. Heck, there are even Phylactery Liches now! 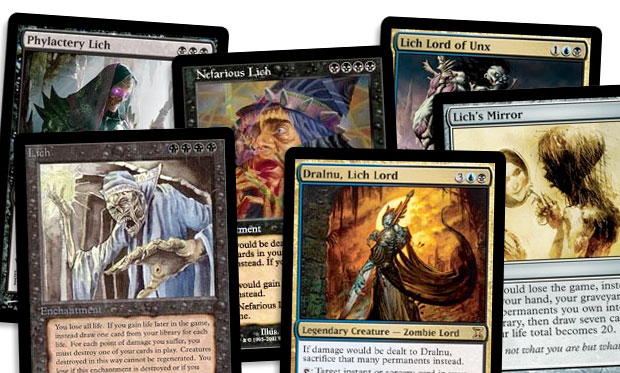 The most forgotten Lich card of all, though, has to be Lich's Tomb. As with the rest of its kin, it carries such a tempting offer. Breaking a quite fundamental rule of Magic (the otherwise normal "dying once you've sunk to zero life" rule) is quite appealing, but the Tomb's drawback is almost equally unappealing. I guess immortality comes at the price of all your stuff. In that case, I'm guessing whoever is actually in the Tomb (as the artwork suggests) wasn't mummified.

In any event, Lich's Tomb might as well have read like hieroglyphics to many, who tossed the rare aside almost as quickly as they saw it. I was nice and tried to give it a bit more time, but ultimately gave up as well.

Then Coldsnap came out, and with it, one of the more interesting Johnny white cards perhaps ever, Darien, King of Kjeldor. Since day one Darien users have made a habit of damaging themselves over and over to get Soldier tokens, replenishing themselves with Soul Wardens and the like.

Now, with Lich's Tomb in the mix, we have quite an interesting combo. Darien says whenever you're dealt damage, you get an equal number of Solider tokens. Lich's Tomb says whenever you lose life (and damage, as seen in the helpful reminder text, causes loss of life), an equal sacrifice of permanents must be made. Stack the two triggers correctly, and when the dust settles, you'll be immortal. Huh.

I decided (naturally) to pair this combo with the destruction that red brings to the table. Mass player damage can get both life totals low, and Darien can create Soldier tokens in his spare time. Acidic Soil is a neat choice, as is Mark of Asylum to protect Darien and his dudes from my red sweepers.