elcome back to the Lab, everybody! We've somehow waded into the month of December, the traditional first month of winter. I, for one, can't believe 2010 is already about to come to a close. 2011 will surely bring another year's worth of insanity to the Magic world, while it appears 2010 is drying up. It's the last non-theme week of the year, for crying out loud! What's left to do but cover the last couple of combolicious cards from Scars? A couple of three-drop enchantments and the most curious Myr in the set await my deck-building approval. Let's get there! Unfortunately, I didn't get as many Mimic Vat combos via email as I expected. Still, I'll chalk that up to the card being casually busted since it came out.

What do Furnace Celebration, Viridian Revel, and Myr Propagator have in common thematically? Not too much, besides the similar expansion symbol. I always have trouble with non-theme weeks, but hopefully my deck-building antics are up to grade. I wouldn't want to disrespect these interesting cards.

What else could a Furnace Celebration be but a Fire Party? If I'm correct, I demand a ticket, as that sounds like the craziest time ever. Although getting doused by that molten lava (as those goblins are in the art) wouldn't be a highlight. 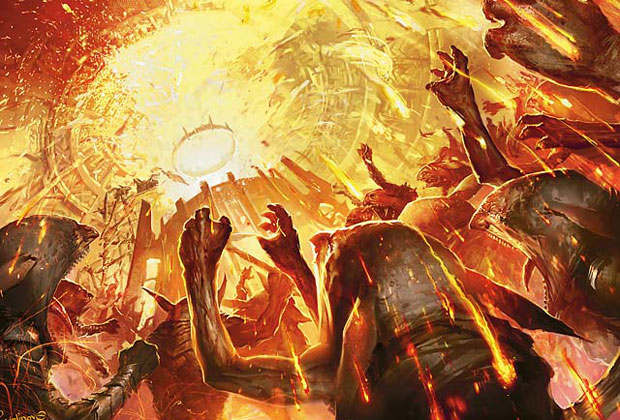 Furnace Celebration is the latest card in a recent (and awesome) trend of cards that care when you sacrifice a permanent. Dragon Appeasement started this movement (though Savra, Queen of the Golgari was an early pioneer), then Mortician Beetle and It That Betrays threw some twists into the theme. I've always loved sacrificing things for various purposes, and now that there's a straight up burn option to this trend, I'm quite excited. Furnace Celebration might not slide into any infinite strategies, but it can still be a ton of fun.

An obvious starting point is the various Eldrazi Spawn. The quirky little sacrificers have crept to the top of my "Cards to Use in Sacrificing Decks" list. Using the Eldrazi Spawn effectively reduces the cost of Furnace Celebration by one. Another neat card that works well with Furnace Celebration is Dragon Broodmother. Besides being a giant finisher, the Broodmother offers a devouring sacrifice every single upkeep. If you have two or more mana to spare, each upkeep could mean 2 or more damage. 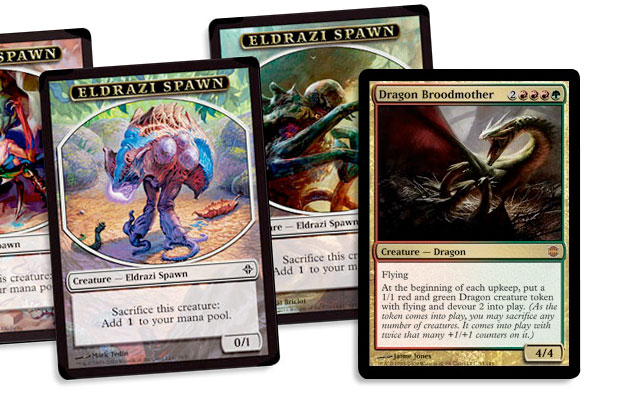 I could fill in the rest of a deck skeleton with a bunch of other random sacrifice effects, but I think I'll bend the deck with a wacky addition. It's something I've been doing a lot lately, and I really like where the decks end up: in a pretty unique place. My weird addition here will be Overlaid Terrain, a card from the first set I began playing Magic with, Nemesis. I've always thought this enchantment was intriguing, and I've tried to build around it before. It was always quite difficult because if I drew a second copy (likely, since I usually had four), I would never want to cast it. The effect was already on the board.

With Furnace Celebration around though, I suddenly have a strange incentive to sacrifice all of my lands. Especially if they can now tap for two mana each. Paying four for the second Terrain eats up two possible Celebration triggers, but assuming you have a ton of lands out, you could funnel the rest into the Celebration and deal 2 damage as many times as you could.

Getting that initial Terrain out is kind of tricky, though. If you save a fully charged Khalni Heart Expedition, though, you could be right back at eight mana. A pairing of Life From the Loam and Explore could help further reset your land base. Adding Life from the Loam also lets me add some other fun land sacrificers, like Devastating Summons.

Something strikes me about Myr Propagator. Its not like copying creatures hasn't been done before, but the fact that it's on a Myr (already the most mysterious of tribes) makes me quiver with excitement. The obvious benefit of this guy is that over time, if it's left alone (and who would direct a removal spell at such a cute little Myr), it can create an armada of itself. 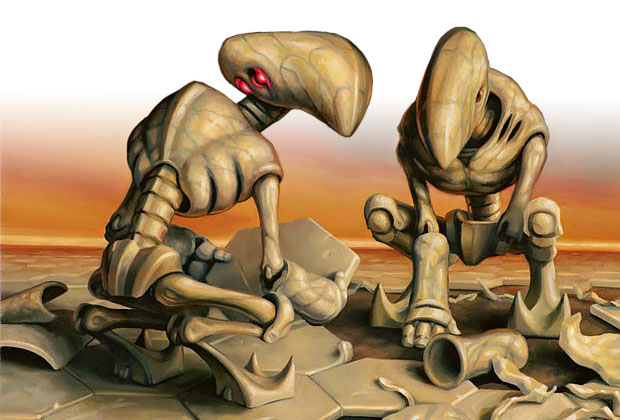 I'm naturally going to pair it with one of my favorite modern cards, Skill Borrower. Let's say you have a Myr Propagator on the top of your library, and a Skill Borrower on the battlefield. Since Skill Borrower says it replaces all other instances of other names with its own, paying three and tapping the Borrower will create ... a Skill Borrower token. Wow. That's dang cool. And since the Myr Propagator is still on the top of your library, if you somehow had a method to give the new Borrower token haste (Strider Harness, or the cheaper-to-equip Lightning Greaves) you could immediately use it. Provided you had three mana, of course.

Even if I did go the infinite route of Training Grounds + Ashnod's Altar (infinite mana AND Skill Borrowers!), I think having finite Skill Borrower tokens would be more plausible and more fun. Especially when you draw the Propagator, and another juicy artifact pops onto the top of your library. Like say, Grand Architect.

Oh boy. Even if you don't pull off the Skill Borrower + Myr Propagator trick, Grand Architect is still nuts with the Borrower. Heck, the Architect is a total boss with any type of blue creatures. With all the artifact mana we can now create, I'm going to go with one of my favorite Myr makers, Myr Matrix. It's indestructible, so you can simply pop the five cost artifact out and wait for your Architect to make an appearance before you start making Myr. Myr Battlesphere is the hottest thing in Myr culture these days, so in go four. I realize it doesn't interact with Skill Borrower, but shush, because basically everything else does. Another mana sink, Golem Artisan, seems great with Grand Architect, and Steel Overseer has been attached to the Skill Borrower for a while. And with all the Myr (and Borrower) tokens we can make, multiple +1/+1 counters can be potentially lethal. And by potentially, I mean extremely.

The deck rounds itself out with Silver Myr (basic mana acceleration is never that bad.) Crystal Ball is a neat new trinket that Skill Borrower loves. In a pinch, you can scry for just one and restack the top of your library. Brittle Effigy, meanwhile, is probably my favorite piece of artifact removal in quite some time. Sure, you probably wouldn't want to use the Borrower with it, but in a jam, you certainly could. And the Grand Architect can buffer all the mana for it.

Viridian Revel is another curious card that, upon close inspection, is an homage to the first block of Mirrodin. I could be reading way too into this theory, but I distinctly remember a ton of anti-artifact sentiment coming from green back in 2003. And come to think of it, most had the word Viridian in their names. Viridian Shaman, Viridian Zealot, and the weird Viridian Lorebearers all back up my thesis. 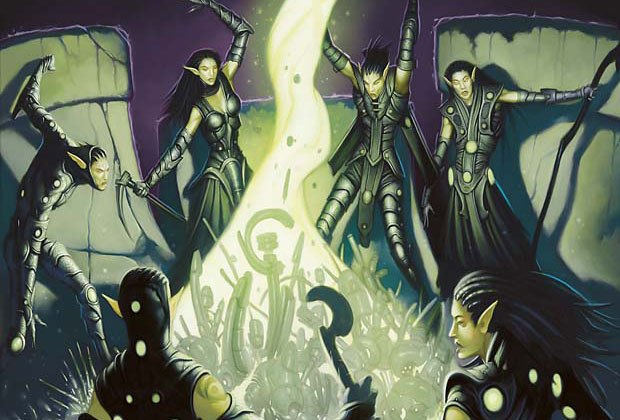 Now we have perhaps the "lord" (in enchantment form) of every Shatter effect ever. Whenever you happen to destroy one of your opponent's artifacts, you'll draw a card. So casting a Tel-Jilad Justice is suddenly the coolest thing ever: Cast it, kill something, scry for two, and then promptly draw a card!

Since this effect is narrow to say the least, however, it's going to be tricky to take a huge advantage from it. First of all, I could pack a potential deck to the brim with artifact hate, and then instantly lose because my opponent doesn't have a single artifact in his or her deck. (Unlikely in these times, but you still never know.) Basically, I want my opponent to be playing with a TON of artifacts, so I can cantrip kill them at will.

Liquimetal Coating is a good place to start. Tap it make your opponent's biggest threat an artifact, slam it with Tel-Jilad Justice, and joyfully leap into the air. Of course, the Coating can only be activated once a turn (and I know better than to start pulling crazy Voltaic Key tricks. Or do I? ... Nah, I do.)

What excites me even more than the Coating is Mycosynth Lattice. Oh boy. The former Johnny King of the World, the Lattice (which is completely stupid: check out the ancient archives of From the Lab if you want to know what I mean) makes everything an artifact. Now you have infinite targets for your artifact-hating spells.

But you know what? I'm going to go ahead and throw in Mycosynth Lattice's best friend forever. This is a classic, classic combo, and perhaps newer players might not know of its existence. Without further ado ... March of the Machines + Mycosynth Lattice.

With the Lattice and the Revel on the board, cast March of the Machines. This enchantment animates all artifacts on the battlefield, giving them power and toughness equal to their converted mana cost. Here's the crazy part. Since all the lands on the battlefield are artifacts too, they as well get animated ... for about half a second. Then state-based effects kick in and send every land on the battlefield to the graveyard.. Since their converted mana costs are always zero, they will have 0 toughness, and thus go to the graveyard.

Basically, cast the March, blowing up all lands, and drawing a card for each one of your opponent's. When the dust settles, the board will be empty except for all the nonland permanents that were on the battlefield before. Hopefully you waited to cast the March and instead spent turns killing all you opponent's nonland permanents with Viridian Shaman and the like. You know, like our original plan. Then when the March lands, your opponent will be void of everything, while you have some giant beaters (the March and the Lattice themselves become 4/4 and 6/6.) Even though all your lands get wiped out as well, you'll still have mana in the form of Myr.

In the early game, Lorescale Coatl is the perfect card. It completely distracts your opponent while simultaneously taking advantage of the Revel's card draw.

3 March of the Machines 3 Viridian Revel