ello, and thanks for stepping into the lab today! Ready for some Johnny decks, off-the-beaten-path ideas, and frankly hilarious commentary? Well, you've either stepped into the right place, or at least two-thirds of the right place and one-third behind the scenes of Mystery Science Theater 3000. Of course, I'm a bit tuckered out from last week's talent-thieving tribulations. Either I used up a lot of energy on the Esper-oriented decks, or I'm steering away from them for the most part. Hold on, I've got to think of more either/or jokes. Um, Vedalken Orrery? Aether Storm? 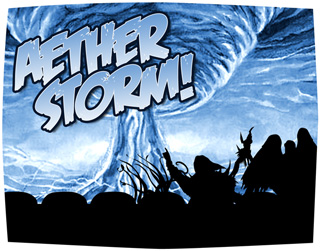 In all seriousness, today (as I mentioned last week) will be an extension of Esper week. However, as last week was all about the etherium, this week will be all about the "or." Specifically, the cards from Esper that aren't as much artifact-based. Since the options in that column run pretty thin, I'm going to go ahead and also include Minion Reflector today, to go along with Memory Erosion and Gather Specimens. Hey, it's a non-Esper-based build-around-me artifact! It fits this week's restriction! Bwahahaha, I've cheated the system! You will all bow down to me!

I hate non-theme weeks. However, by restricting myself this week (a sort of spiritual sequel to last week), all four decks I created had a common theme: straightforwardness, synergy, and the rush of feeling one finds when a forgotten card is used for the first time. Keep this in mind, folks. Sometimes I feel like taking a break from crazy combos and focusing on the strategy of the game. I mean, how else does one viably build around Memory Erosion?

Eternal Sunshine of the Eroded Mind

As you can probably tell, I'm at a bit of a loss for Memory Erosion puns. I even considered working Ebert + Roeper in there, because it kind of sounds like erosion. Okay, that's just pathetic. I'd rather erode my own mind then remember thinking that.

Memory Erosion fits within this week's quasi-theme fully on account of its flavor. Both the flavor text and the art belong with Esper, the former for its mentioning of filigree and the latter for its swirly blue stuff invading that guys mind. Initially I thought Memory Erosion would be tough to build around (as stated above), and I was bummed out that only opponents would have to mill themselves for two. If your opponent controlled a Memory Erosion, it would fit right into a green-blue threshold deck. Card draw spells would find more card draw spells and land-fetching spells would thin your deck. Pretty soon you'd hit threshold. At that point, Werebears and Seton's Scouts would pump up, Far Wanderings would accelerate you three times as much as it did before, and Grizzly Fate would hit its full potential. Sadly, blue's threshold cards are in short supply, but in terms of retrace, it's got the hookups. Oona's Grace can draw you cards, and Spitting Image laces both colors into a creature-copying frenzy.

Boy, if there was only a way to give Memory Erosion away.

Puca's Mischief not only performs the main function of the deck, but it actually gives Possessed Centaur a good home. You're sure to be at threshold in this deck, and by trading a random Anurid Barkripper for a random card, you're giving the fully tainted Centaur an actual target to hit! On a slightly different note, by trading away your threshold guys, they weaken due to your opponent (most likely) not being at threshold. Gurzigost seems like a decent win condition. Its upkeep ability should be well prepared for, and it's essentially an unblockable 6/8.

Keeping my options open is something I often consider. When my ultra-high-tech, multi-personnel bank / casino / blimp heist went awry due to internal conflict (a gentleman criminal's term for dirty traitors) I proceeded to parachute from the blimp while activating the explosives I'd planted. Since I had played the stock market with the blimp's company, I wound up getting rich anyway. The same general concept is true here. If there isn't a decent window from trading away Memory Erosion, you can use it in tandem with bounce spells. Making your opponent play the same spell twice or more should spell happiness Memory Erosion, which will trigger multiple times. Temporal Spring is the best of the lot, by acting as both bounce and neo-removal with Memory Erosion in play.

Some may condemn this as the familiar Blue-Green Madness deck, but without the madness and with Puca shenanigans. Just keep in mind the mini-theme we've got running: sometimes neat, unplayed cards fit into already established decks in weird ways that warp them in subtle ways. That sounds like Johnny to me.

Minion Reflector seems to me to be one of those cards that slips everybody's mind, and even more so in a set like Shards of Alara, where the five respective shards are the first things people remember. On the "test your Johnny strength" bell-ringing challenge, Minion Reflector definitely scores some mad points. You may not like it, but you can't deny Minion Reflector's got style. And that's what Johnny is all about.

The first cards I looked for to interact with the blue web of reflection were four-cost creatures. Why? Because if I dropped Minion Reflector on turn five, on turn six I could play a land and reflect some four-drop. I widened the search to three-costers, since I might not get a sixth land, then narrowed the choices down over a number of months. (I tried to get on a deserted island for effect, but I accidentally boarded Oceanic Flight 814.) First I centered my sights on Lightning Crafter. Let's say you have a Goblin Warchief in play along with Minion Reflector and land. When you play the Crafter, both the Reflector and the champion ability will trigger. Choose to reflect first. Once that resolves, the fresh token's champion ability will trigger (so now you have two champions on the stack). In response, tap both Crafters to "bolt" things (since they have haste). Now, champion the original Crafter with the token Crafter. At the end of your turn, you are forced to sacrifice the token, bringing back the original crafter, at which point you can deal 3 more damage. Basically, you just dealt 9 damage in one turn. 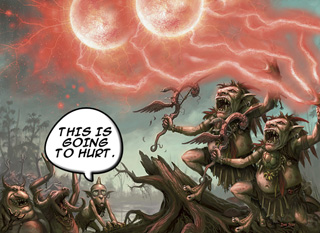 More Goblins round out the deck. Stingscourger is evil when reflected, and you don't have to worry about the token's echo cost. Mogg War Marshal and Siege-Gang Commander can make you a ton of tokens. Even Steamflogger Boss is great when reflected. You'll have two 5/3 haste creatures swinging in. No word on whether four Contraptions can be assembled at that time.

Other great cards to use with Minion Reflector are the evoke creatures. Evoke Spitebellows for

to both attack with a hasty 6/1 and deal 12 damage on the same turn. The suspend cards from Time Spiral work well also, particularly Greater Gargadon, who can axe tokens to pop into play quicker. And when reflected, that's 18 to the Red Zone.

One thing I realized while building the Goblin deck above was that if a Goblin Warchief wasn't in play, usually I'd only be attacking with one creature: the newly created token. "Hmmm..." I thought. "What cards like to have one creature attack?" The exalted creatures, of course! Curving into a Rhox Charger after a turn-five Minion Reflector would give you a hasty 5/5 trampler, not counting all of the other exalted dudes you may have out.

The other tidbit that bugged me was the Reflector's forced sacrifice. "If only I could proactively sacrifice my token...." I thought. This answer isn't as obvious, but I went with Mercy Killing, which doubles as creature removal. You can Mercy Killing a 6/6 Rhox token for a respectable attacking or blocking force of six 1/1 tokens. Of course, having lots of tokens makes for a killer Mirrorweave (hey, more of the reflection theme!), especially when you target an exalted creature.

Cold-Eyed Selkie likes to get an exalted bonus, and reflecting it here and there shouldn't hurt. Battlegrace Angel, on the other hand, doesn't need any help to be awesome, but go ahead and reflect it anyway.

As you can see from the captured blue-eyed owl on the art of Gather Specimens, those sparkling etherium chains are surely the stuff of Esper. Unlike the brutal mind-cuffing of Curse of Chains, Gather Specimens tethers creatures with a different sort of method. With reins of power, one might say.

The first natural interaction with Gather Specimens was with fellow Esper denizen Thoughtcutter Agent. By keeping tabs on your opponent's hand, you'll know to play Gather Specimens at the right time. A similar way to pull this off is an easy turn-two Tidehollow Sculler. You've got the gist of your opponent's grip, minus the threat your Sculler has taken.

Of course, I didn't want Gather Specimens to merely be a Treacherous Urge (which I've also included since it fits so well). Somehow I wanted to rig the game so lots of creatures would come into play at the same time. If you then Gather those Specimens, that's a massive creature swing in your favor. With Parallax Wave, you can do exactly that. Remove all the Wave's fade counters to remove opposing creatures from the game. Then, in response to its leaves play ability, play Gather Specimens. You'll get far more than just one creature this time! Planar Guide can do the same, while still acting as its wrench-in-the-works old self even without a Gather at the ready.

The deck's evolution continued when I added some cards that benefited from Planar Guide, like Mulldrifter and Venser, Shaper Savant. Hunted Phantasm is hilarious with Gather Specimens, if you can stomach the mana. For easier mana ingestion, try Coalition Relic today! The Relic ramps you up to five mana early, perfect for your evokers or for playing and activating Planar Guide. If you time it right, play Delay on an opposing creature spell. The turn it's supposed to materialize into play, respond with Gather Specimens for a sort of suspended stealing.

To cap off this week, here's a couple of quick poll questions about the four shard weeks so far (we'll have the Jund one the week after next).

"Momentum is a great ally."