elcome back to the Lab. Today, as mentioned in last week's article, I will focus on the Scars of Mirrodin block, soon to rotate out of Standard (to make way for the looming Return to Ravnica). Sequel sets are enjoying a recent surge, it seems, and I'm totally okay with that. Jaunting around the Multiverse's infinite planes is fun and all, but there's something especially crackling about returning to a much-loved plane like Mirrodin or Ravnica.

Scars of Mirrodin and its follow up sets, Mirrodin Besieged and New Phyrexia, operated on a template of nostalgia-based design that succeeded in evoking memories of the original Mirrodin. This residual approach to a block sequel gives me high hopes for Return to Ravnica, as well as any future plane revisits. (One vote for Kamigawa here.) 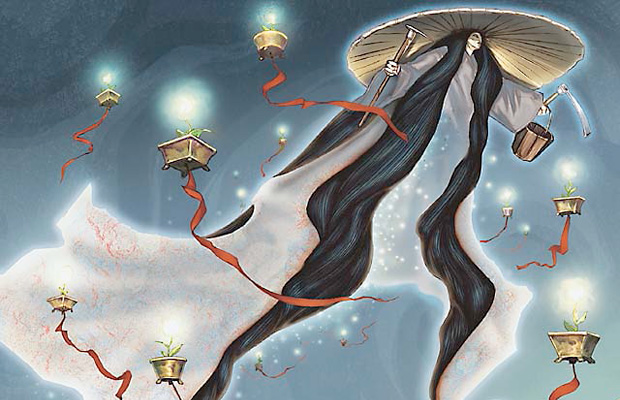 Although these sets are fading out of Standard, they remain reservoirs of combo goodness in the splendorous fields of Casual play. Today I'd like to wade through Scars block, covering some favorite cards and mechanics, with some decks as well, of course. Let's get to it.

After exploring three new planes in a row (Lorwyn, Alara, and Zendikar), I was delighted to return to a former plane. I had enjoyed my last stay on Mirrodin, which revamped the artifact type and introduced the now-integral game piece that is Equipment. Scars of Mirrodin was a fresh dive into these artifact-based design waters. For instance, metalcraft was a riff on affinity, treading on a similar "play with artifacts!" territory, minus the slight brokenness. Of the metalcraft cards, I enjoyed the sturdy Indomitable Archangel, with her built-in artifact barrier, and Molten Psyche, which presents a goofy deck concept.

Where Scars deviated from Mirrodin's formula and found its own identity was through the infect mechanic. The revival of poison counters (a then-ancient alternate win condition) was met with both adoration and acidic recoil. I had been on both sides of the Pit Scorpion-poking fence during my earlier playing days, and while I'm sometimes rankled at a quick death by poison, I try to remain tolerant of it. I certainly had a blast attempting to draft a poison deck in Scars Limited.

Infect was also a riff on wither, and without it, the set's major harbinger of glee probably wouldn't exist. Proliferate injected its own brand of hyperactive toggling fun into Magic, and some combo deck skeletons were newly rejuvenated. Contagion Engine might be the flagship proliferate card from Scars, as it shows the mechanic at its most board-wipingly lethal.

I wondered if there was a recently printed card that I could combine with proliferate to wreak havoc. I went with Otherworld Atlas, which is definitely abusable. A counter-laden Atlas can force a mass draw on the whole table—including yourself, obviously, because you have ways to keep the machine going, those being methods of untapping artifacts. Voltaic Key comes to mind, but after some Gatherer digging, I found a more appealing option. Psychic Overload. That last effect enables a deck to, with enough artifacts, continuously untap the Overloaded permanent. The Atlas taps to draw into more artifacts to discard to the Aura to untap and so on.

There are two side effects of this combo. Running Psychic Overload allows me to occasionally lock down an opposing permanent (depending on my opponent's artifact amount). Yay! Your opponent will find his or her deck being poured into his or her hands. Aw, dang it. To counter this, I went with Arcane Laboratory, which imposes a one-spell limit on turns.

To supplement the effect of stocking up the Atlas with charge counters, I also ran Surge Node, which can slowly siphon its six counters. With other gleaming targets like Tumble Magnet, Lux Cannon, and the all-important Everflowing Chalice, the Node thrives alongside various proliferation, be it the Engine or Steady Progress.

The idea is to win with Psychosis Crawler, a vicious game-ender from the next set. With enough drawing from the Atlas, the Crawler will do its pain scuttles and then pounce as a giant attacker. If that doesn't work, focus on ramping up the Atlas and milling out your Lab-locked opponent. The lone Elixir of Immortality can wash your graveyard into your library perpetually, sealing a potential mill win.

In Scars, there were whispers of darkness at the plane's more sunken corners. In Mirrodin Besieged, these dark rumors manifested as the Phyrexians themselves, returned to twisted power, there to conquer the land. The war was on, a storyline deftly encapsulated in the set's two mechanics. Battle cry was a fun little mechanic, especially at its most elusive heights with Signal Pest leading the way. Living weapon was completely awesome, though. I had some über-funsies with Germ token generation. 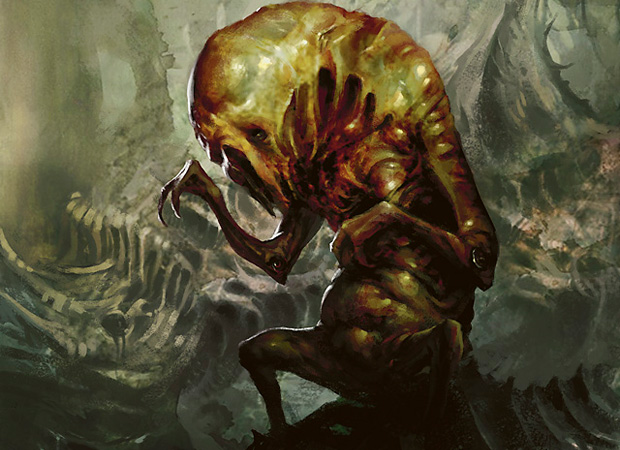 One fascinating rare from Mirrodin Besieged that I never covered at the time is Mirrorworks. It's obviously quite capable of hijinks. I recently received an email from a reader named Mark Schofield that contained an interesting list based around the card. Mark wrote:

I thought I'd float an idea that revolves around two little-played artifacts, Semblance Anvil and Mirrorworks. It's a Standard decklist that is almost all Scars block due to the heavy artifact requirements of the two pivotal cards. Anyway, once you have the Anvil making all of your spells cheap you can drop Mirrorworks onto the battlefield and let the shenanigans commence!

If you're under a lot of pressure you can use Treasure Mage to take out the opposing team with Contagion Engine, or if you have time you can really set yourself up with Caged Sun. Now, supposing you get the Sun, and have both the Anvil and Mirrorworks in play, you can start dropping double Spines of Ish Sah onto the battlefield every turn, using Phyrexia's Core or Throne of Geth to sacrifice it and get it back to your hand. Once all of the opponent's permanents are gone you poison them as you prefer: all at once with Blightsteel Colossus, one hit with the Nexus and then proliferate, or you can take your time and spend the next ten turns attacking with Treasure Mage... if you're into that sort of thing.

I once heard that Karn Liberated was good against permanents, but he's nothing compared to Spine of Ish Sah getting reflected every turn with Mirrorworks. However, some decks can beat you in the four turns it takes to set everything up. For those cases you can sideboard in a nice combo in which they do all the hard work of getting your life total nice and low, then you use Soul Conduit to switch life totals, and hit them with Trespassing Souleater for the win! All in all, there's no better deck to illustrate the power and diversity of the Scars of Mirrodin block. This letter is now compleat.

When the dust settled, the conversion was compleat. New Phyrexia, new free dementia. Invaders, master stainers, the Phyrexian-infected mana itself. Some of my favorite cards in the set bear the odd, almost grotesque Phmana symbols, such as Birthing Pod and Phyrexian Metamorph.

What I relish about the set is the overall tone laced in the cards. Phyrexia is dark and boiling with hate. When mere commons bite like Vapor Snag and Psychic Barrier, the mood pulses. Up to the most bomb-tacular cards in the set, this atmosphere is achieved, and that's what I enjoy about the set. Also, I must admit that I crave Phyrexian lore.

The set has a lot of enjoyable cycles, from the crushingly mean Praetors to the pregame weirdos, the Chancellors. Rare slots aside, the cycles continued on the lower tiers with the Exarchs and the Shrines. Today's last deck features Shrine of Piercing Vision, as a key digging piece of a deck sent to me by reader Walter McManigal. He wrote:

The main win condition is to get the Worldslayer attached to Invisible Stalker, float all of your remaining mana, then cast Faith's Reward after all of your permanents have been binned. Oh, and don't forget to cash in all your Wellspring triggers to when you do!

Now we need to find our combo pieces and that is where the Ichor Wellsprings, Ponders, and especially Shrine of Piercing Visions come into play. Now, you need to survive until you can go off so you run eight dedicated sweepers. Terminus is favored as it will recycle your creatures to find again. The Vedalken Certarchs and Tumble Magnets pull triple duty as they buy you time to search, tap down blockers so you can get a non-Invisible Stalker creature through with Worldslayer, as well as force your opponent to commit more resources to the board right into your waiting sweepers! The Grand Architects facilitate a quick Worldslayer cast and equips as well as buffing your team. The Phyrexia's Core/Wellspring's interaction and the Druidic Satchel keep your life total reasonable and thin out your deck.

Once you connect with Worldslayer and Faith's Reward your permanents back, winning becomes elementary. The Sideboard gives you access to a variety of toys to play with, including Myr Superion for big beats, Stoic Rebuttal and Dissipate to protect your combo, Dispatch and Oblivion Ring in order to handle any "problem" permanents.