ello and welcome to the Lab once again. As you know, it's Feedback Week here under the big top, and I for one am excited. Not only am I stoked to share some crazy ideas from my readers, I want to take some time to share my thoughts on feedback as it pertains to the column.

I receive tons of wacky emails from readers, whether they be positive, negative, or a casual invitation to "hit up some pinball machines." (Not a lie; that was actually a reader email! And an enjoyable one at that!) I love reading the thoughts of those who care enough to read mine week in and week out. As a message to all those who have written me an email (and in honor of Feedback Week) I'd just like to say thank you.

And now, let's open up the electronic mailbag. I call it "The MailBlag."

A regular emailer, Travis Froggatt, had a kooky take on my contest poll. (See last week for details.) Remember, I offered a choice of three contests: A build-around, a collector number theme, and a word-based deck-building restriction. Travis, well, wanted to take things further.

On that subject, why doesn't Gatherer allow searches by collector #s?"

I hereby add the binary choice to the poll. By the way, those results should be here next week!

Reader Eric Chase liked my remedied multiplayer format, Mind Swap Magic 2.0, but he had a variation of his own.

"I totally agree that a planeswalker wouldn't flavorfully follow directions from a player that didn't summon them, and it's disappointing that the rule is flawed, but I think I have a solution.

Instead of a planeswalker following a player during each mind swap, they remain on the battlefield under the same "physical player's" control, but their abilities cannot be activated (Pithing Needle style) because they know something's up with the guy or girl who summoned them. When the player that summoned them returns to their "body," their abilities can be used again. 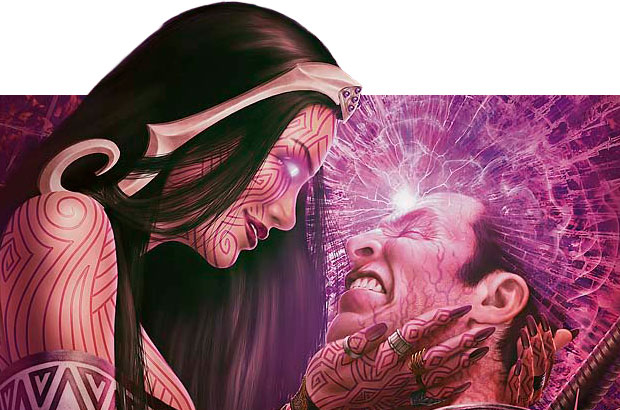 I know this way nerfs planeswalkers a bit, but it's less broken and it makes sense flavorfully to me. I like to imagine that the Mind Swap doesn't have a visual signal, and just happens. Though the planeswalker doesn't know for sure what happened with the player (except for Jace, being a mind-mage), they know something is wrong and go rogue until the player comes to their senses.

I love this variant, regardless of the rule and it's really fun!"

This could definitely work as an alternate to my quick fix of denying mind-swapping powers to activated abilities. In fact, reading the email made me think of a possible third solution to the planeswalker quirk. Like in Eric's, the planeswalkers stay in their positions and don't move around. Unlike Eric's, the different minds can use their abilities. However, when a different mind takes control of a 'walker, that 'walker's loyalty count goes to 1 or 2, because he or she is not familiar with the new mind at all. I'm not sure whether 1 or 2 is the correct number, as this is just a concept. Try a few games and see which works best.

Also, I love the line in Eric's email: "I like to imagine that the Mind Swap doesn't have a visual signal, and just happens." That's exactly how I imagined it playing out on the battlefield!

I got a mixed bag of feedback in regards to my 'Magic World Cup' article, in which I succumbed to a strong case of soccer fever and mixed two of my favorite games. Of these, my favorite one came from Frank de Azevedo, who clearly stands close to me in the intersecting parts of the Soccer and Magic Venn Diagram. 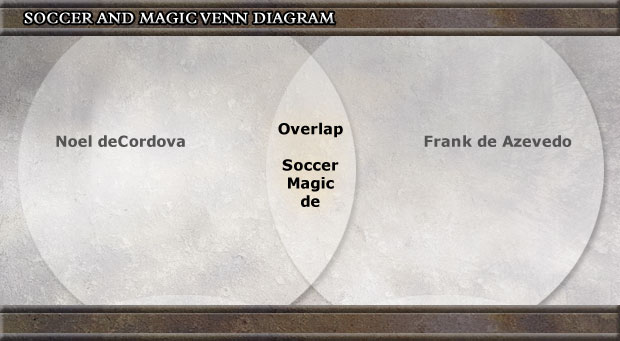 "How could you put creatures with Defender as the side-backs??!!!
Clearly you, Gringo, have no notion of true football.
Side-Backs need to be fast and to have a lot of stamina, because they have to run through most of the pitch.
See Spain's Sergio Ramos. He's always appearing offensively at the right side. Same goes for Germany's Lahm, or Brazilian Maicon. There are teams that use more defensive side backs, almost like using four centre-backs, but they are the exception. 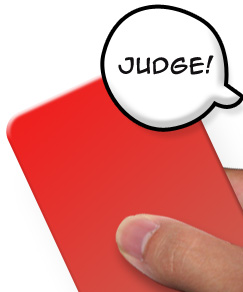 Yeah, I know that this doesn't have anything to do with the article, but I love football (soccer), and I have nothing better to do."

If, just for one week, all my readers were like Frank de Azevedo, I would have dove head-first into advanced tactics like the formations he mentioned. I didn't even talk about coaches, or different defensive styles, or even yellow and red cards! And as for the World Cup referees, I'd chalk them up to Blind Creepers that made everyone Blind with Anger, for the most part.

Douglas McManis was a fan of my Planeswalker Contest that I held earlier this year, but was sorely disappointed that I was forced, by default, to leave out his favorite 'walker: Nissa Revane. To remedy the situation, he built a criteria approved contest deck months later and sent it to me for kicks. Reading a submission, now that the contest itself is completely out of my mind, was oddly refreshing, and I hope it feels the same to you all. 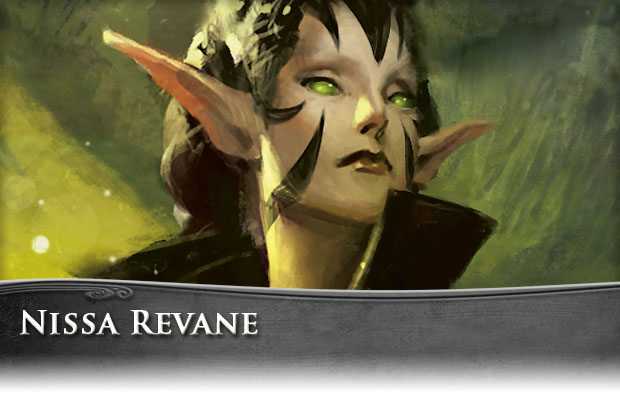 "Nissa Revane hated her time in Mirrodin, curse her need to EXPLORE. She was captive and cold in this land of metal and death. OVERRUN with a longing to feel NATURE'S SPIRAL again, she lay on the cold cell floor she couldn't help but remember her beloved Zendikar and the other planes she visited. She swore she could hear the JORAGA WARCALLER's jubilation as the annual ELVISH PROMENADE began. She missed the ELVISH ARCHDRUIDs and even the jesting TAUNTING ELFs she knew would antagonize the IMMACULATE MAGISTRATE and her trusted IMPERIOUS PERFECTs. But she couldn't dwell on her distant loyalties. She swore a VENDETTA against her captors that day, and she vowed to return to this lifeless plane with those who've proved their worth. From the shabby WIREWOOD LODGE to the unsettling GILT-LEAF PALACE and the reliable LLANOWAR ELVES, there would be a GROUNDSWELL of NISSA'S CHOSEN who would bring the MIGHT OF THE MASSES down upon her captors. 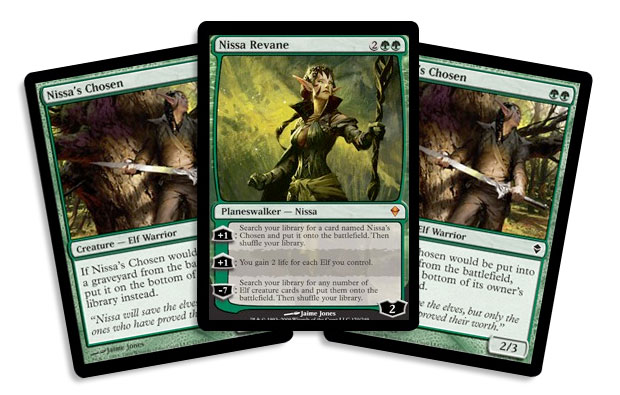 Building around Nissa provides a surprising challenge in this deck-building format. Mostly because elves are a pretty easy deck-type to build. Here's your goal, get lots of elves that benefit from having lots of elves, GO! So I took the approach of building mainly around her abilities and filling some gaps with flavor.

Nissa's first ability is pretty standard, but in order to make this a reliable use we need four of Nissa's chosen. Her second ability is like that of the Wellwisher, so the best way to make this pay off is to combine Sylvan Messenger & Ambush Commander then just start cranking out elf tokens. Imperious Perfect, Doubling Season, Lys Alana Huntmaster and Elvish Promenade should handle that nicely. Her last ability is all elf, which is why this deck is so creature heavy.

Land should never be an issue with elves so I'm not worried about only having seventeen lands. The combo of Ambush Commander and Elvish Archdruid mixed with the classic Llanowar Elves should fix the mana nicely.

Now for the flavor, I tried to keep the cards to planes that Nissa has visited. So Zendikar, Lorwyn and Ravnica are all present but NOTHING from Mirrodin because Nissa was disgusted by her visit there. She also famously studied with the Gilt-Leaf to develop her usage of black mana in secret. I kept the use of this black magic to kill spells that 1. wouldn't affect kill elves because of Nissa's deep loyalty to her people, and 2. those that would give life while taking it, a classic elf move. I also used all the green cards I could find with Nissa Flavor Text (Rampaging Baloths, Groundswell, Nissa's Chosen, Tanglesap). 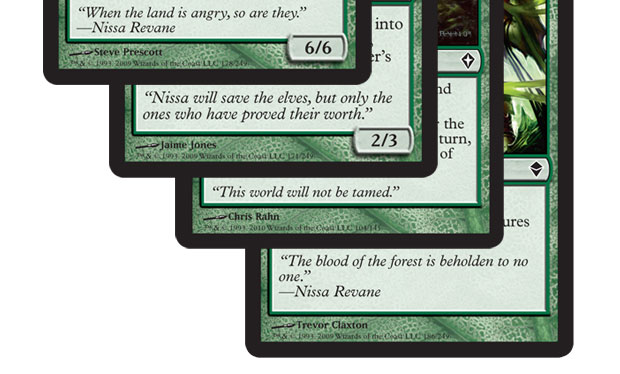 That's my deck, I hope you find it as fun as I do. Hope I'm not TOO late for a contest nod."

Alright, here's a blue and green combo deck that is one of the best ways I've seen to use Archmage Ascension, which I could never get to work in my favor. From genius Zackary Segall, here's "Wheelshot!" 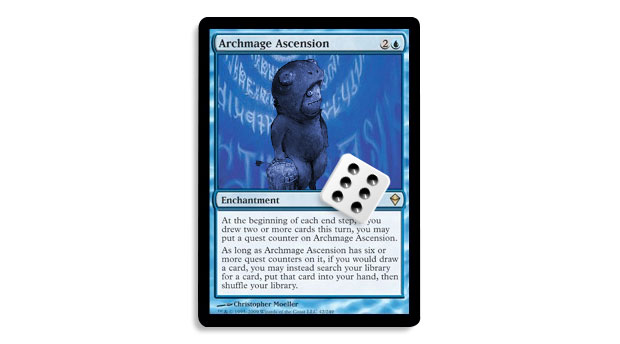 The deck is simple. Once you power up your Archmage Ascension and gain super-tutoring power, you can bounce Manamorphoses all day long. Two mana into two mana, and the card draw into the other Manamorphose. But how to keep them all from settling in the graveyard? Wheel of Sun and Moon comes to the rescue. Generate an arbitrarily large storm count, then tutor up a Grapeshot and hit 'em big. 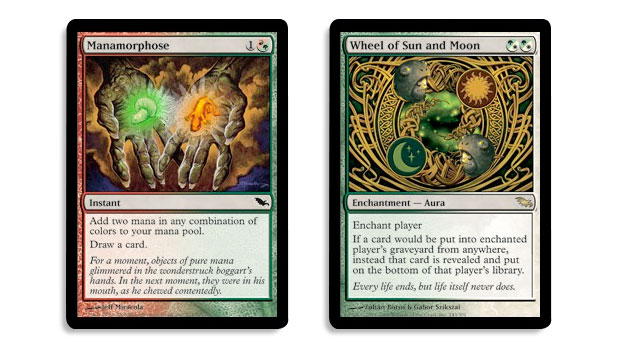 Of course, the hard part is simply questing for the Ascension's full power. Gilder Bairn definitely helps, and gets tapped down by the potentially busted Shared Discovery. With Plant tokens and quick creatures, you should hit four at the perfect time. Cantrips are galore as well, and don't forget about the eight Looters. Well, technically four Looters and four Scholars, but who's counting? 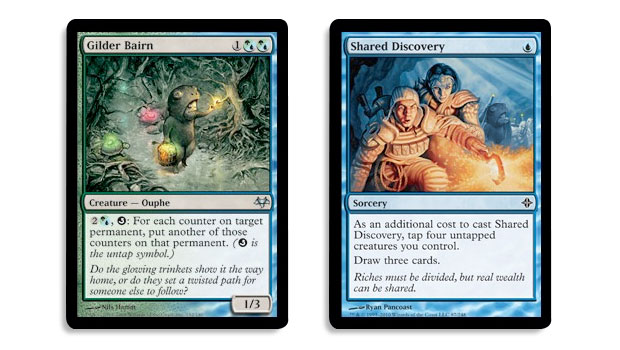 Finally, we have Brian Stroud coming up big with infinite mana in Standard. "There has to be a spell in Standard that can untap permanents to copy with Echo Mage ... maybe with a Reality Spasm to untap more than two permanents at once, I can generate an arbitrarily large amount." 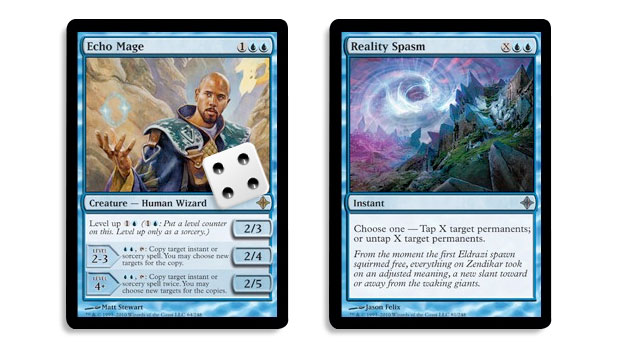 Brian opts to end things with a Banefire. Who I am to say otherwise?

And with that, the mailblag is shut! Until next time!