ey all, and welcome back to the Lab. Today's title is a bit more ... gripping than usual, but it'll work as a template. (I'm sure my psychiatrist will see it as another subconscious cry for help in the wake of Dio's death*, which totally isn't true ... really.) Three intimidating words will shortly lead to three interesting decks, based around three intriguing cards from Magic 2011. All of these three are, in my eyes, bluntly straightforward and yet, deliciously exciting at the same time.

And with Scars of Mirrodin on the horizon, (don't worry, we'll be there before we know it) I want to knock these guys off my Cards to Use or Break list, or my CUB list. Yeah, that's it. Just CUB. I could have spent four hours coming up with an intricate acronym of a funny word, just to initiate groans all over the internet, but I didn't. Well, I didn't come up with anything good, at least. The best of the lot was Cards to Use or Break In Classy, Logistical Expertise, or my CUBICLE, which if nothing else allows me to pretend I have my own little workspace in the real life Magic offices. Now to make an acronym for WATERCOOLER ... but I digress. Let's get to these decks!

*And in all seriousness, RIP Dio.

Every time I scroll through the alphabetical list of Magic 2011 cards, I always get ambushed in a torrent of flame just as I hit the letter C. First of all, I see Chandra Nalaar, and the now iconic red planeswalker lulls me into a false sense of security. Then the brand new double whammy of Chandra's Outrage and Chandra's Spitfire hits me like a one-two punch made of molten lava. Just as I'm happily reeling from the amazing redness, Combust comes along and finishes me off. (I suppose Cyclops Gladiator is extra insurance.) 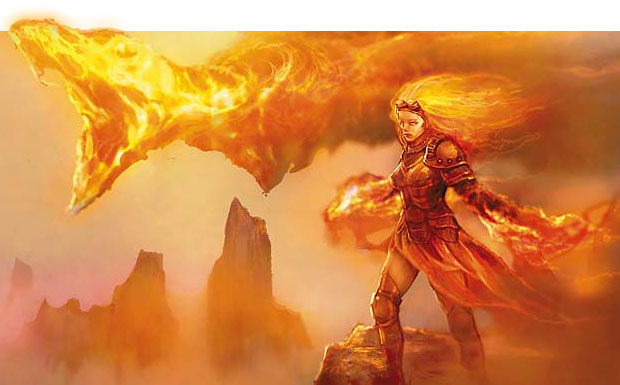 Chandra's Spitfire is definitely a card I'd like to build around today. It fits into that small niche of red cards that amplify damage based on the number of burn spells you cast. Akki Lavarunner (the flip side of Akki Lavarunner) is another example of such a red card. Casting a giant Banefire won't crack the potential of these cards, but a bunch of little repeatable burn spells, such as Flame Jab or Punishing Fire, just might. 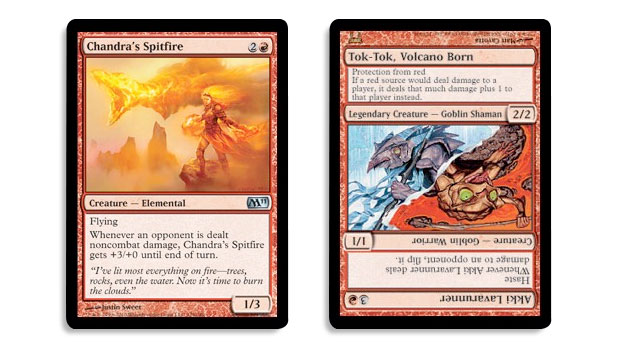 And speaking of red instants and sorceries, let's talk about Fire Servant, a card that happily falls into this niche as well. The last five-mana card to make my brain explode into flame-riddled synapses was Rumbling Aftershocks, which conjured up thoughts of giant Comet Storms and Deathforge Shaman. Fire Servant, arguably, makes me more excited, as I have the whole world of red burn spells to double! Imagine casting a Lightning Bolt for 6. Or simply casting Flame Jab and retracing it, for 4 damage, and then swinging with a 7/3 Chandra's Spitfire.

What are the most ideal burn spells for a budding deck list with both Fire Servant and Chandra's Spitfire? The previously mentioned Flame Jab and Punishing Fire are solid ones, because they are cheap and quite repeatable. Staggershock (a modern classic among burn spells, in my opinion) fits right in. Grapeshot copies itself in the storm fashion, and will double itself for each copy thanks to Fire Servant. Arc Blade comes and goes around endlessly. Finally, I've wanted to use Ember Hauler since it was released, and the deck will need some more bodies anyway, so in it goes.

While I focused on the brutal red-offense of the deck, I re-read Chandra's Spitfire and noticed that it could increase its power on my opponent's turns as well. If my opponent dealt himself damage somehow, maybe with a pain-land (fetch lands won't do the trick, as they do not deal damage), then my Spitfire would pump up. How to possibly take advantage of this corner case? I was toying with adding Fling to the deck anyway, so I, well, threw some in.

I had to put both versions of Chandra in the deck, as well as her Outrage. The Magic 2011 version is an easy source of noncombat damage for her Spitfire, while the trickier Ablaze can transform all of your spent instants and sorceries into one big tongue of flame. This deck idea is infinitely customizable, so fill the slots with burn spells of your choice if you wish!

A recent Card of the Day explained the change of the Skeleton guard in terms of core sets. For years Drudge Skeletons had represented the gruesome flavor of skeletons, up until now. I quote the Card of the Day blurb: "Reassembling Skeleton delivers more directly on the flavor of, well, reassembling." 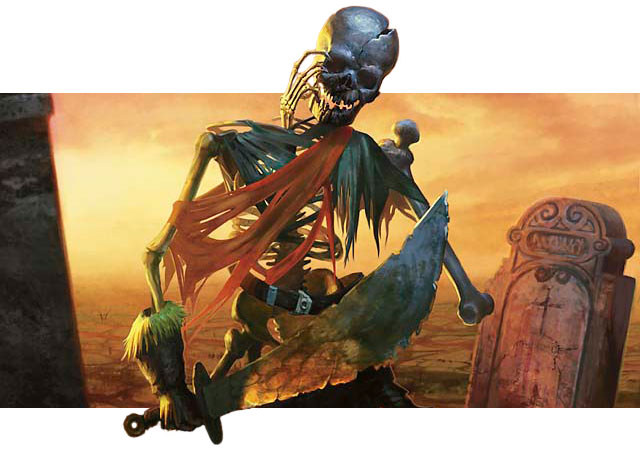 At first, I was mildly amused by Reassembling Skeleton. "It's a neat riff on the flavor of Skeletons, and does some nifty graveyard stuff, I guess," was my initial reaction to the card. I then tried to think of complicated ways to abuse his ability, ranging from Skill Borrower to Volrath's Shapeshifter (which is too insane on its own to bother pairing with anything!) 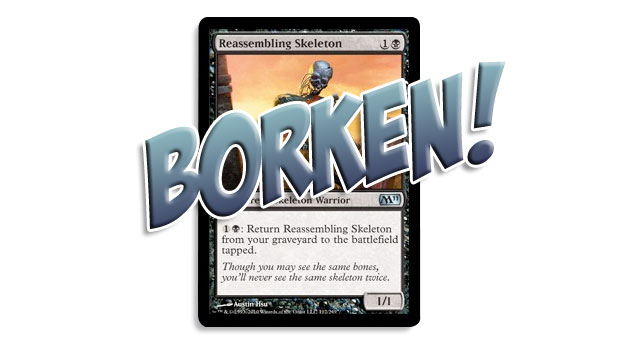 Then, the other day, something in my mind just clicked. It was like watching a plot twist unfold the mystery that was hidden in plain sight. My amazing revelation was: In terms of hyper-Johnny activities...Reassembling Skeleton is BORKEN.

I'm not sure how I missed it at first, but the fact remains that Reassembling Skeleton can hop out of the graveyard and back onto the battlefield for a mere

. At instant speed. How ever many times I wanted.

How many combos does this facilitate? Looking at Standard alone, we have multiple

: 1 damage to target creature or player) and even Jinxed Idol (endless fodder.) And that's just Standard.

An interesting card to pair with the Skeleton is Sword of the Meek. Formerly busted with Thopter Foundry, you can sacrifice both permanents to something (Magmaw, Infernal Tribute) and then reassemble the Skeleton. The Sword will promptly follow it! Not really deck-building worthy, but kind of funny.

Here's a deck based around some of the cards I've mentioned here.

The deck really revolves around River Kelpie, which combines with Reassembling Skeleton and Bloodthrone Vampire to form a

: draw a card engine. Every card has some synergy with the others. You can go for the Skeleton + Phyrexian Altar + Pawn of Ulamog combo, which you take advantage of by either another Pawn (infinite Eldrazi tokens makes infinite mana for your Orochi Hatchery) or Extractor Demon's odd milling ability. Unearth works well with River Kelpie, as does persist (obviously), which Murderous Redcap represents. Screams from Within is a classic River Kelpie combo that works even better with Reassembling Skeleton. Cast the Screams on the Skeleton, and both cards will hit the graveyard. In response to the Screams' ability, return the Skeleton to the battlefield and draw a card. With the right cards in place, you could do this forever—infinitely drawing cards.

There are tons of interactions here, try to find them all!

Steel Overseer is quietly one of the most potent cards in Magic 2011. Putting a +1/+1 counter on each of your artifact creatures (including itself!) is quite powerful. I'm sure it'll only get better when Scars of Mirrodin comes out this fall. 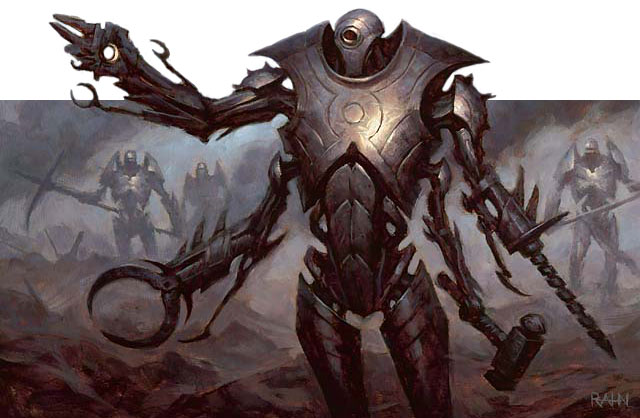 Here's a clever email from reader Christos Pipinikas, who decided to pair the Construct with the Arcbound creatures of Darksteel.

"The whole concept is to load your machinegun; get as many +1/+1 counters as you can on Triskelion by pumping your Arcbound horde with Ajani and Steel Overseer, sacrificing them to Blasting Station or use them to block incoming attacks and return them to the top of your library with Arcbound Reclaimer. Then unleash a storm of molten lead on your enemy and his hapless pawns."

This is a neat list, and it was my inspiration for the deck below. I liked the concept of using Steel Overseer to load up Triskelion with tons of counters, and I threw my own wrench into the works: Skill Borrower.

An artifact creature itself, Skill Borrower can accumulate tons of +1/+1 counters and unleash them if a Triskelion is on top. Steel Overseer's ability can be borrowed as well. And Arcbound Reclaimer can set up numerous shenanigans. Once adjusted for blue mana, here's my version of the deck.

The rarely used Extruder can combine with Academy Ruins and/or Arcbound Reclaimer to wreak havoc. Walking Archive is just fun. Vigean Graftmage can send your Steel Overseer into hyperdrive. Etherium Sculptor lets you hit your drops consistently. Finally, Triskelion and Pentavus are the dual machine guns.