'm back. I mean, welcome back, and all that. I'm just... okay, just, read. I died, okay? Last Saturday. But I came back, somehow. And I feel...stronger. More sturdy. A bit angrier, even. Okay, you caught me. Full blown evil. I don't even understand it. Mikaeus can't be behind this (unless I'm not human... there could be something there). 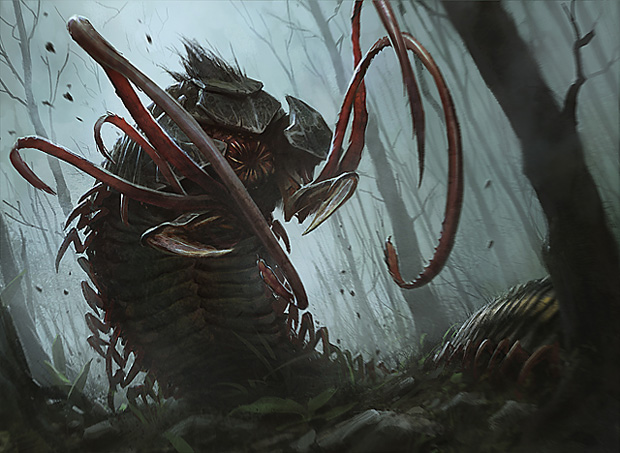 No, I've acquired undying from a different source. Undying's a neat ability to have. It meshes well with the "things get worse" vibe of Dark Ascension. Consider an oncoming Vorapede. Coming up with 4 damage suddenly isn't so much an answer as the birth of a new problem: a slightly larger Vorapede. Undying definitely gives me a sense of restlessness; a kind of unstoppable darkness to shudder in.

Anyone who was around for persist has a good grasp of how ridiculous this sort of effect can be. The two abilities have often been compared, and for obvious reasons; they're mirror images of each other. And just as persist was ripe for the shenaniganning, undying has a perennial capacity of crazy.

So let's get to today's enduring decks. Hold on... there we go. Had to stab my voodoo doll self, something I do occasionally. (That is what's happening on Gnarled Effigy, right?)

The Young and the Restless

Let's start the undying festivities with an awwww-worthy common from Dark Ascension (not the only one to be featured today). Young Wolf is simply radiant, with its ferocious little stats and that vivid art. As what's known as a "French vanilla" creature (a creature with just one ability), Young Wolf can let your opponent know of your necro-tinged intentions from the first turn. Follow it up with a turn-two Strangleroot Geist—an exciting new spark plug for mono-green aggressive decks—and get attacking. 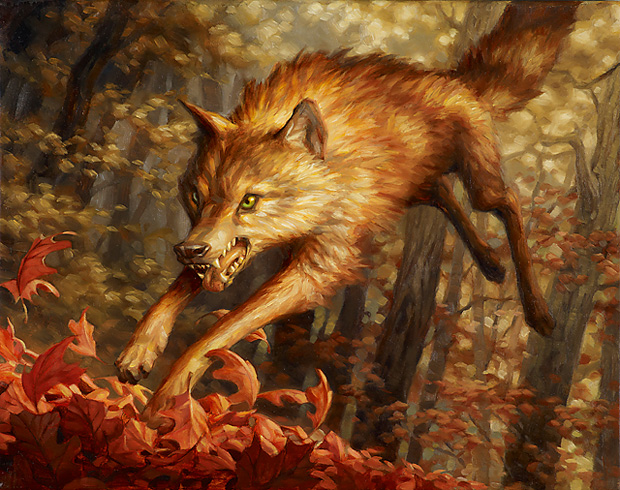 While coming back with +1/+1 counters is an exciting prospect, I wanted to find ways to take advantage of undying that could result in hijinks of an infinite nature. One of my first finds was Simic Guildmage, which can move a newly minted +1/+1 counter to another creature (possibly itself) and keep undying creatures coming back. But my gears began spinning rapidly upon reading an email from Owen Rodley, who suggested Spike Rogue. Whoa. And with an Ashnod's Altar thrown into the mix, the results were zany.

Owen also pointed out the ridiculousness possible with Ghave, Guru of Spores, and suggested the legendary Fungus for consistency. I wanted to keep things mono-green, though, so I instead used Cytoplast Root-Kin, which helps out all my creatures with +1/+1 counter and has the Rogue's ability as well. Having a huge attacker won't outright win the game without trample, so I added Bramblewood Paragons to give the deck lethality.

A mono-green deck usually has mana-ramping tendencies, and after some searching I went with Devoted Druid and Fertilid. With all the +1/+1 counters around, these cards can provide more mana than usual.

I used Green Sun's Zenith as an undying (of a sort) creature tutor. This led to some fitting singletons entering the deck. Vorapede seemed pretty obvious. Lumberknot can get huge in this deck. Finally, Predator Ooze is, for a three mana 1/1, a deceptive beatstick.

While I'm on the subject of mono-green decks with Strangleroot Geist, I thought I'd take a tangent to discuss haste on green cards. This anomaly has actually reverberated throughout Magic's history, and I wondered whether it was at this point possible to attempt a mono-green haste deck. (I've done the same with troll-shroud... I mean, hexproof.)

Uktabi Drake kicks things off at my desired pace. A three-turn sequence of Drake, Geist, and Boggart Ram-Gang seems formidable. The creature scale thickens with Vengevine being its insane self (and Giant Solifuge skitters in for 4 every now and then), topping out with the mighty Thornling. Just add mana!

For extra oomph, I added some of green's suspend creatures, which acquire haste upon settling into the present. Groundbreaker seemed like a fun one-of as well. And after noticing a lack of a consistent two-drop punch, I went with Skinshifter. Sadly, it doesn't have haste, but it beats soundly and I've never used it in a Lab project before.

Among the noncreature spells lurks Hunting Wilds, a fun land fetcher that also can make hasty green attackers in the late game. Evolution Charm is a multifaceted tool in any green mage's library. Tower Above is often a devastating spell, and Hunter's Insight gives the deck some card-drawing power.

The Figurehead is Undead

Finally, the rotting man himself. Mikaeus, the Unhallowed is certainly one of the more exciting cards in Dark Ascension. As a representation of where Mikaeus (formerly the mighty Lunarch) finds himself these days, this card also harkens back to the legendary creatures in Magic's past that also received two cards to emphasize change (Kamahl is more famous, but Balthor is a more astute comparison). 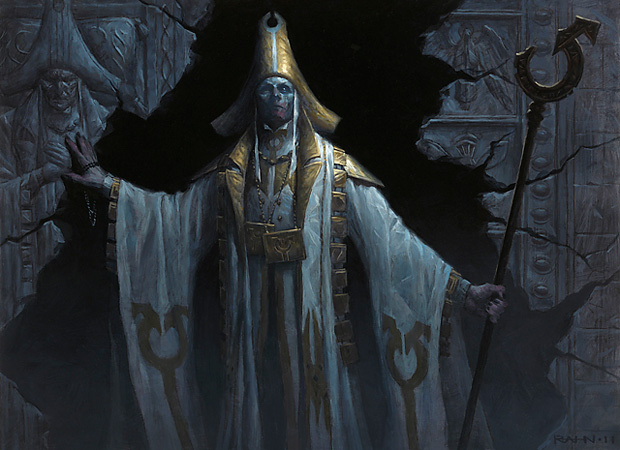 Let's start with the basics. Mikaeus weighs in at a 5/5 physique for six mana and carries three abilities. He intimidates blockers, which is neat, I guess. He's a quasi-No Mercy for Humans, which speaks to his newfound hatred for his former race. Finally, and most bonkers of all, Mikaeus gives all your non-Human creatures undying. Is this silly? Straight-up.

Through the help of many emails, I cobbled together a list that's packed with tons of Mikaeus combos. Matthew NoLastName suggested Triskelion. Remove the first two counters to ping your opponent, then use the last on the Triskelion itself. It'll be a 1/1 with 1 damage on it, so it'll die, and come back with an extra counter. So... infinite damage.

Jamison VanLoocke came up with a plan to ping-pong two Fume Spitters between the graveyard and the battlefield. In his words: "Pop one to saddle an opposing guy with a –1/–1 counter and have it come back with a +1/+1 counter. Pop the other to remove that counter, and repeat." MetaRundas came up with a similar combo and provided an appropriate victory condition: Flayer of the Hatebound. This guy is monstrous as a personal Pandemonium for restless creatures only.

Too many people to name here suggested I combine Mikaeus, the Unhallowed with a persist creature. I went with Murderous Redcap. If you have a sacrifice outlet, you can sacrifice the Redcap over and over for infinite damage. Viscera Seer seemed cheap and useful.

I filled out the deck with some synergistic cards. Geralf's Messenger stands four deep in this deck, and it'll dish out serious damage. Netherborn Phalanx finds your important six-drops. With all the death and undeath, Nether Traitor is sure to be annoying, especially with Flayer or Mikaeus around. Hex Parasite was added as both a strong one-drop and a method of removing +1/+1 counters from your undying creatures, so they come back forever. And while I'm playing with this robotic Insect, I'll throw in a singleton Phyrexian Etchings. This combo has been in the back of my mind for a while. Use the Parasite to control the cumulative upkeep and draw scads of cards.

Sometimes They Come Back...

One deck to go... and I'm all out of undying cards. I suppose I could attempt a mono-blue undying deck with Relentless Skaabs and the somehow underwhelming Geralf's Mindcrusher, but I'll leave that idea kernel for you all to tinker with. Instead, I'm going to continue a hidden theme of this article: The Zeniths! 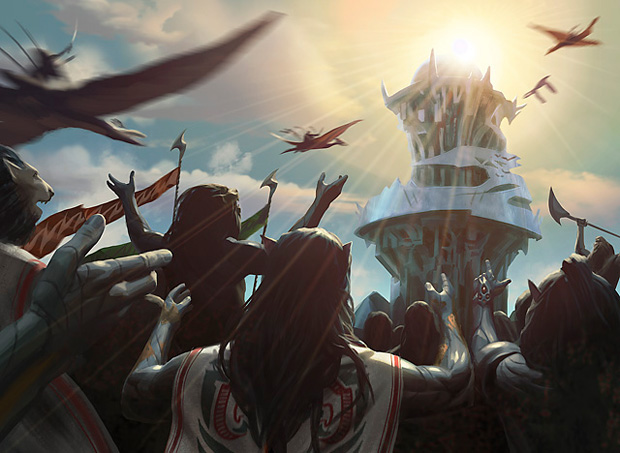 These spells have undying in a sense, as they nearly always come back at some point. So far, I've used the green and black ones. Of the remaining Zeniths, I've got to go with White Sun's Zenith, as it gives me an excellent reason to build a mono-white Cat deck. What's another? Sanctuary Cat.

I bet you weren't expecting this during Undying Week.

Hope you all enjoyed. Until next time!