Fury of the Legion

reetings, minions! It's Boros Week here on DailyMTG.com and I've got a pair of fun red and white combo decks for your enjoyment. My first plan was to capture a Foundry Champion for study, but... Well, let's just say things didn't go according to plan, and now I'm down one steel cage trap and half of my hair. Note to self: Avoid upsetting Flame-Kin. 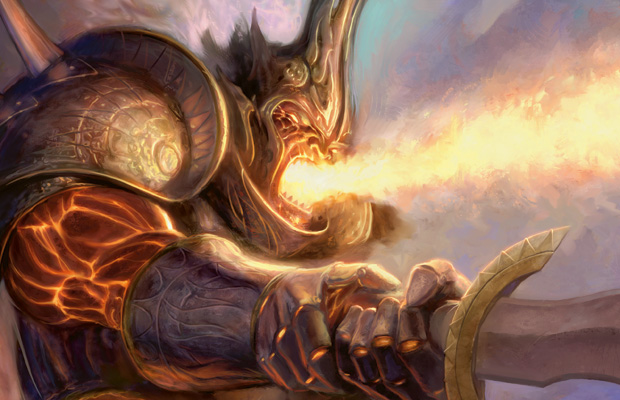 The Boros Legion is my personal favorite guild of Ravnica. Their commitment to freedom and justice is admirable, and it helps that the Boros have always been a big proponent of double strike, one of my all-time favorite mechanics. Although Boros decks are often fast and furious aggressive strategies that win with a swarm of creatures, they do have a Johnny side as well, if you know where to look.

One of the things the Boros are very good at is assembling a large army. With tokens and cheap creatures, they can build up their forces quickly. Normally, this kind of strategy wouldn't belong here in the Lab, but thanks to a pair of interesting win conditions, this menagerie of recruits turns from a regular old army into a combo piece that allows you to kill your opponent in a single strike.

Burn at the Stake is the first one-hit win condition. Once you've assembled seven creatures, you can tap them all to deal 21 damage straight to your opponent. You don't even need to attack; you just win.

The second one-hit wonder is Tears of Rage. The number of creatures you need to have for this varies based on how many blockers your opponent has, but four is enough to win on an empty board, and seven is enough to almost guarantee victory. To survive, your opponent would have to stop five of the seven creatures. Tears of Rage does require you to sacrifice your creatures at the end of your turn as a drawback, but by that point the game should already be over.

To win with these cards, you'll want to build up your army as quickly as possible. Fortunately, that's something that white in particular is quite good at. Through the use of various tokens, you can be ready to win the game with Tears of Rage or Burn at the Stake as soon as you have enough mana to cast them.

There have been several cards throughout Magic's history that put two tokens onto the battlefield for two mana, and we'll include a number of them here. Dragon Fodder and Krenko's Command are the red additions to the lineage, and the classic Raise the Alarm is joined by relative newcomer Gather the Townsfolk. These cards fit quite nicely into your game plan. By casting one on turn two and another on turn three, you can win with Tears of Rage on turn four if your opponent doesn't have any blockers. You can also cast two more token makers to have eight creatures ready for a turn-five Burn at the Stake.

Battle Screech can take the place of two of the two-mana token makers, provided you have a white creature on the battlefield with which to pay the flashback cost. Since the spell itself provides two of the three white creatures needed to cast it from your graveyard, you'll only need to have one already in play.

Since every spell so far (save Burn at the Stake) costs an even number of mana, I wanted to include some one-mana creatures to fill in the gaps and give you an extra body to reach that critical seven creatures, in case you don't have enough tokens to get you to eight. After looking at several other creatures, from Pride Guardian to Glittering Lynx, I eventually settled on Soul Warden and Soul's Attendant. They give you some extra life in exchange for doing what you were going to do anyway, and they can buy you some time against an aggressive opponent. They also don't have to block and risk death in order to protect you.

4 Raise the Alarm 4 Tears of Rage

The Boros are all about combat, preferring to beat their opponents into submission rather than defeat them through trickery or deceit. In fact, the original Ravnica had a card that paid tribute to this, and it's perfect for From the Lab: Breath of Fury. This combo has been around since the original printing of the card, but here's how it works: Attach Breath of Fury to a creature you control. Then copy that creature with Kiki-Jiki, Mirror Breaker and attack with the enchanted one. Provided you can hit your opponent, you'll sacrifice the original and attach Breath of Fury to the copy. Then you can untap all your creatures and get an additional combat phase. Since Kiki-Jiki, Mirror Breaker is now untapped, you can make another copy of your creature and do it all again. You can keep attacking as many times as it takes until your opponent is dead.

Splinter Twin can also accomplish this in place of Kiki-Jiki, Mirror Breaker, but since you're tapping the original creature and can't attack with it, you'll need another creature to kick things off. This can be one that you've played earlier, or you can use Splinter Twin to make a token during your opponent's end step. Since Splinter Twin triggers at the beginning of the end step, the token will stick around for your turn.

The hardest part about winning with Breath of Fury is getting that first hit in. Your opponent will do everything he or she can to block whichever creature is carrying the enchantment. My first thought was to include creatures that can help another creature get through unscathed, like Goblin Tunneler and Thundersong Trumpeter. Suntail Hawk also came to mind as a cheap creature that will always get through if your opponent has no creatures with flying.

Then I remembered a little mechanic from Tempest that makes blocking nearly impossible. Soltari Foot Soldier, Soltari Trooper, and the relatively new addition Augur il-Vec all have shadow, making them essentially unblockable unless you stumble across an opponent who is also using the keyword. With an unlimited number of attack steps to get the job done, the size of the creature doesn't really matter. However, I do find it amusing that an extra copy of Soltari Trooper would get larger and larger with each consecutive attack.

The last few slots I devoted to support cards. Idyllic Tutor can search up Breath of Fury or Splinter Twin, and Boros Signet helps you get the mana you need ahead of schedule. I also included Rebuff the Wicked, a white counterspell from Planar Chaos that can be used to protect your creatures from removal spells.


Ordinarily, the Boros Legion presents a strong, unified front that effectively dissuades anyone who might stand against them. Today, however, they will be forced to battle it out in the arena. With friends as foes and comrades as combatants, who will come out on top?

Both decks started off with a Mountain, and Tokens of Rage followed up with a Clifftop Retreat, casting Gather the Townsfolk for a pair of Humans. Shadow Fury played a Clifftop Retreat of its own and cast Soltari Trooper before passing the turn. Tokens of Rage attacked for 2, then made another pair of tokens with Dragon Fodder. Shadow Fury cast Idyllic Tutor, finding Breath of Fury and passing the turn. Unfortunately, the token deck had Tears of Rage, and thanks to Soltari Trooper's shadow, the four tokens were able to attack freely for exactly 20 damage.

Running from the Law

Looks like some angry Wojek just arrived here at the Lab. No doubt they're looking for the Boros soldiers I, uh... borrowed. Fortunately, the door is locked and bolted. There's no way they can get in here. Unless, of course, they brought along my old friend the Foundry Champion. Which they did. Wonderful. Well folks, I think I'd better be going now.