ello everybody! If you don't mind, please accept yet another hearty welcome to this lab filled with all things casual, creative, and Johnny. This week carries with it a curious focus, despite it not being a theme week, so I'm pretty eager to dive into it.

First, though, comes a quick statement about the Birthday Contest. My reminder last week of the incoming deck deadline sparked a massive influx of submissions. After the dust settled at 12:01 last Friday, I had a whopping 238 emails in my Birthday Contest folder. Over the next two weeks, I'll begin the rigorous process of separating these emails into other folders, such as "Neat Decks" and "Not-So-Neat Decks."

Yes, I did say two weeks, meaning that a column (or two) with the results won't hit the web for another fortnight and a half. The reason? None other than the previews for the looming Magic 2010, which begin next Monday and continue for two weeks. I loved Magic's quarterly spoiler season when I was a wee lad, and even behind the important-looking desk of magicthegathering.com columnist, I still dig it. These particular previews have got me extra amped, though, because instead of just one preview card, I get two. And they're both really cool. 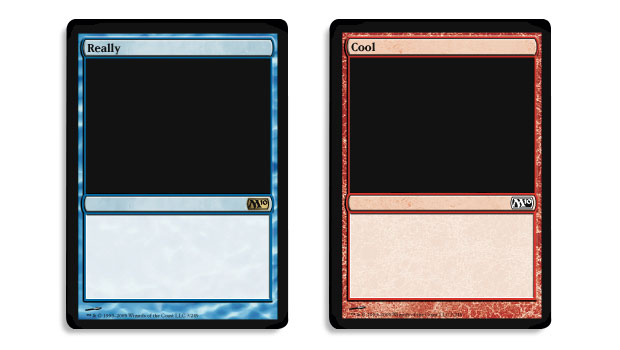 Magic 2010 brings more change for this column than just dual preview cards, though. As you are hopefully aware, the latest core set will bring with it the biggest alteration of the rules since 1999. That year, you may recall, saw the release of Sixth Edition and the first major rules change in the game's history (and still by far the biggest).

Now, perhaps unlike some of you and assuredly unlike some of the staff at Wizards, I didn't start playing until after this change. I grew up with stacked combat damage and never considered that they might change such things as mana burn and ownership of tokens.

I want to be clear when I say that although exploiting these and other corners of the rules was and is a neat trick that opened my mind to combos big and small, the Magic 2010 changes will contain their own opportunities to do silly things. I'm still going to have a blast building wacky decks, but on new terrain, upon which my feet may be a bit shaky. As a Johnny who relishes being restricted when deck building, I can't help but feel some calculated excitement for the post–July 11 possibilities.

That's why today, I'm bringing you three casual decks that hinge on the new rules, as well as bidding the retiring rules a fond farewell. The first stop on this rules train is none other than the departing mana burn, so let's begin!

The Department Of Mysteries 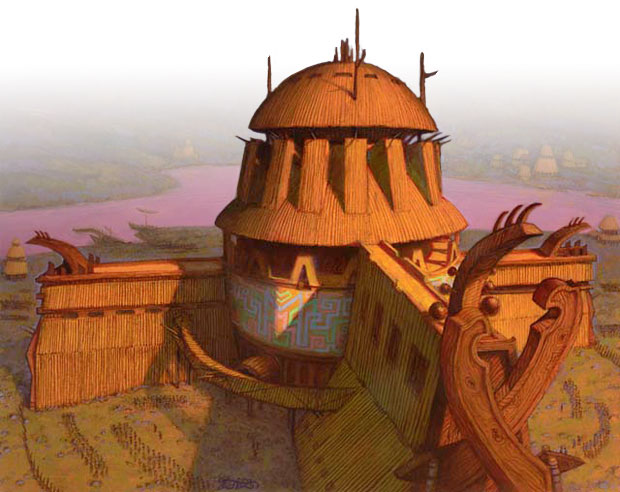 From a deck building perspective, it is interesting to note that as mana burn leaves the Comprehensive Rules, one casual archetype is destroyed while another is simultaneously created. The former, of course, is the Citadel of Pain deck. (Power Surge worked as well.)

The latter is a swath of cards that curiously bear the same expansion symbol as Citadel of Pain. Indeed, Prophecy, once seen as one of those bottom-of-the-barrel sets, now sees some of its cards actually rise in play value–specifically, the ones that get better when your lands are tapped. From these cards, I decided to build a red-green aggressive deck that surprisingly curves out nicely. Spur Grappler starts things off by being a 4/2 for three mana, followed by Keldon Berserkers (a 5/3 for four mana when attacking) and the exciting Scoria Cat, which is a 6/6 for five. Vintara Snapper is a great two-drop as well, being a 2/2 with shroud for two. Calming Verse is really just for laughs, since we aren't running any enchantments. Nonetheless, it pulls off the Primeval Light look. 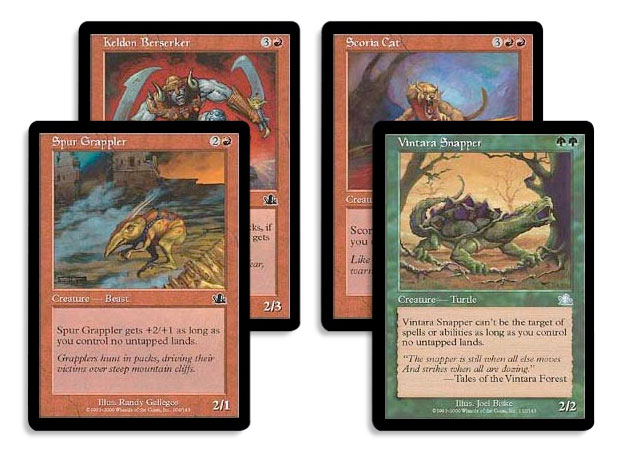 I was very excited about using Veteran Brawlers as an über-beatstick on the cheap, but at the last moment reread his first ability, which quite plainly relies on my opponent's lands. If you played the Brawlers on your turn, your opponent will simply keep one of more of his lands untapped, and thus transform the Brawlers into a 4/4 Wall. But if you somehow gave the Brawlers haste, your opponent might tap out without fear, leaving them wide open for a smack for 4. I went with Madrush Cyclops as my haste-giver because a) it's new and I've wanted to play with it, b) it's from Jund, c) it reasonably fits in the deck's color scheme, and d) following it up with a turn-five Scoria Cat is really sweet.

Besides efficient beaters, Prophecy also provides two artifacts that have similar "drawbacks." Well of Life is now guaranteed to gain you 2 life a turn, and Well of Discovery will now definitely draw you a card a turn.

The deck is simple red and green beats with some neat tricks. One of my favorites is Stoneshaker Shaman. Now, before you cry, "But that guy is useless now, since my opponent will just tap out!" remember that I'm running Veteran Brawlers and his Branded Brawlers. Either they lose a land, or get attacked for 4.

Since I'm pretty much going to tap out every turn, I decided instants couldn't be in the deck. Or could they? Pact of the Titan gives me a good reason to tap out (losing the game = bad) instead of letting all the mana go to waste. Plus, it's a free beater.

4 Well of Life 1 Well of Discovery 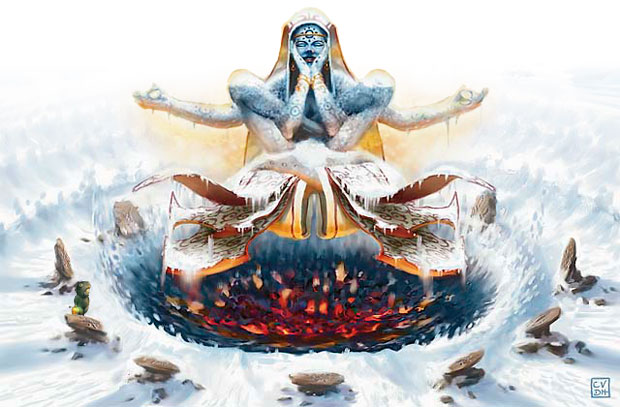 Besides that subset of cards from Prophecy, there are other cards that get blatantly better thanks to the lack of mana burn. Chief among them is Braid of Fire. Its main drawback was always the impending pain of unused mana, which is why it was traditionally paired with Upwelling. Now that the reminder text of Upwelling is basically a part of the game, we're free to use the Coldsnap enchantment without fear.

Before truly beginning to build around the new Braid, I stuck it in a couple of basic decks to get a feel for it sans mana burn. While I happily giggled every time I got the

added to my mana pool, it wasn't flowing fast enough for my taste. "If only I could put more age counters on it faster," I mused. Of course, the mere thought of doing this while mana burn still reigned was nigh blasphemy.

But now, we can do insane things with Gilder Bairn, which is basically what I'm going to abuse. By doubling Braid of Fire's age counters, the red mana will flow much more rapidly. Happily,

can help pay for the Ouphe's untap cost, and Paradise Mantle can cover the rest by tapping the Bairn for that bit of 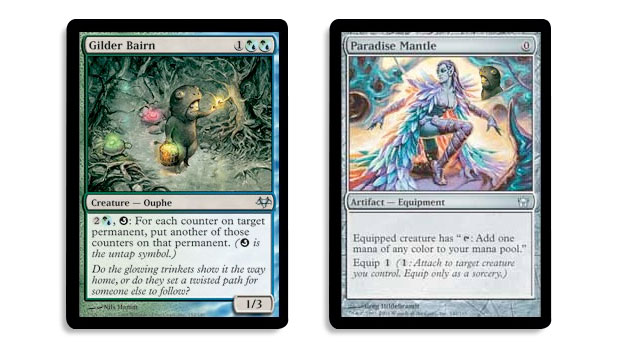 Another way to keep the age counter level expanding is to take another turn, using the various Time Walk-esque cards. I went with Savor the Moment, a perfect card to use. Not only is it cheap for that effect, but its drawback (you don't get an untap step on your extra turn) is balanced by the Braid's mana production. Gilder Bairn also untaps by itself for even more age counter madness! 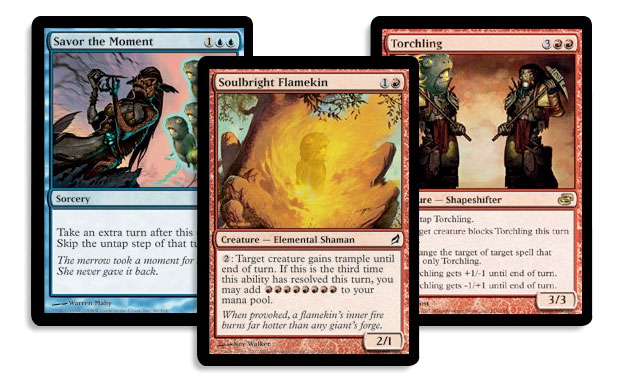 Before, you'd need a mana sink of some kind to keep your life total in check. Now, you no longer need one. Despite this, I'm still going to use a mana sink, in the form of Soulbright Flamekin. This guy doesn't need to untap to give you two extra red mana, and it gives trample to a finisher of your choice. Whom would that be? How about Torchling? It untaps also, and has numerous activated abilities for your Braid mana.

Thundermare is a nice fatty that taps everything down. Since your creatures have ways to untap themselves, the scales will shift in your favor. Hateflayer seems amazing in this scenario. 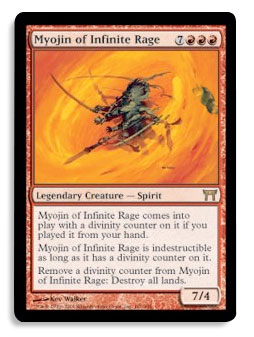 I wanted to add other expensive red things that give Gilder Bairn something to double, so I turned to the ridiculous Myojin of Infinite Rage. If you manage to double the initial number of divinity counters on the legendary deity, you could blow all the lands on the board twice! Or, you know, just once, leaving the Myojin indestructible. If you have Braid of Fire going strong, mana becomes less of a worry.

Gemstone Array seems like the ideal mana storage device in this deck. With it in play, you can hold Braid of Fire mana until your main phase (inefficiently, but you'll have more than enough mana) and wash red mana into blue if necessary, and it's friends with Gilder Bairn too.

The Rage of Age 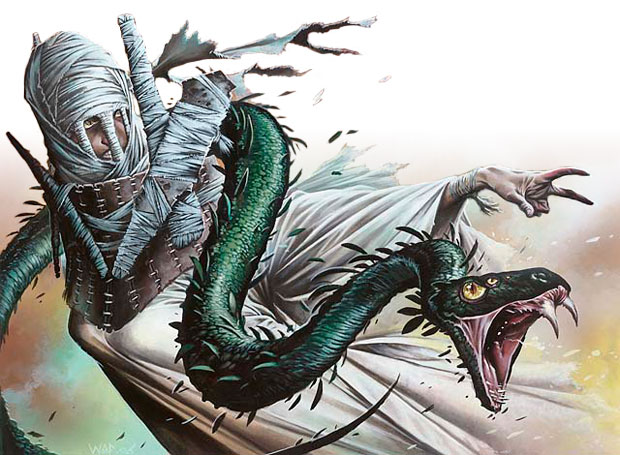 Another change after July 11 will be the slight adjustment to how lifelink and deathtouch work. Rather than being triggered abilities, these abilities will now be static. This means that doubling up on Armadillo Cloaks will not result in doubling the lifelink.

What benefits come from this? Now that lifelink is a static ability, it doesn't care if the source of the damage isn't in play, whereas before, if the source of the damage wasn't around to trigger when the damage was dealt, you wouldn't gain any life. This means that if you somehow give Bloodfire Colossus lifelink (through Spirit Loop, say), if you pop it, you'll gain the 6 life for each creature and player it hit. Before, lifelink didn't work this way.

A similar exciting trick is to apply this same concept to deathtouch. Let's say you have a Bloodfire Dwarf equipped with Quietus Spike. Popping the Dwarf will ping each creature in play, and since deathtouch is static, the damaged creatures will hit the graveyard. And you thought Mogg Fanatic was dead.

For the following deck, I'm going to focus on the new lifelink. Spirit Loop restores itself after any sacrifice for damage, so that'll be my lifelinker of choice. Bloodfire Infusion turns any creature into a Bloodfire Colossus. Hmm ... what recently printed creature likes lots of Auras?

Uril, the Miststalker does, by golly! Having the two Auras attached to Uril will result in a 9/9 ticking bomb with "troll shroud." 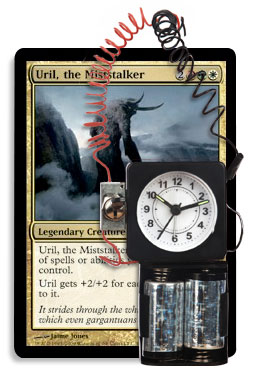 There are some other creatures that sacrifice themselves for damage. Ghitu Fire-Eater can. Cinder Elemental can. Magmasaur (!) can. Martyr of Ashes (!!) can. Shard Phoenix (!!!) also can. Are they all hitting the deck? You bet your Warhammers they are.

Undying Rage is the other Aura that regrows itself, so that also makes the list. Firewild Borderpost is a red "land" for Martyr of Ashes. Evershrike likes being hooked up with Auras (especially Bloodfire Infusion). Altogether, this is a weird Naya-colored deck that likes beating with Uril and sacrificing Magmasaurs.

Lifelink to the Past

See you next week when we hive, I mean, dive into Magic 2010 previews! 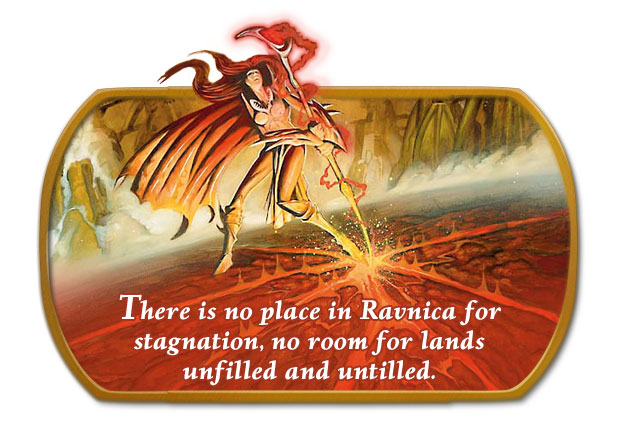