ello and welcome back to the Lab. This week, on what is yet another auspicious non-theme week, I thought I'd take a look at some cards from New Phyrexia that reference Equipment. Ahh... my favorite artifact subtype! (Sorry, Fortifications.)

Equipment as a subtype has made some great strides within the past couple of years. Living weapon premiered just a set ago, and last year's Stoneforge Mystic proved to be the best Equipment tutor ever printed (maybe a tad too good). Sword of War and Peace, meanwhile, completes the five-part, enemy-colored Sword mega-cycle (so mega, it spans both Mirrodin blocks!).

New Phyrexia certainly provides some interesting combos with Equipment and Equipment-related cards. Now that the set has had a couple of weeks to settle into your collective subconscious, readers like you have sent in some extremely cool combos with these cards. As the resident Johnny, it is my painless duty to share this creativity with the world. Of course, I've got some ideas of my own... which I'll strategically save for last. So... inbox first, outbox second. Let's get to it!

The Pains of Being Puresteel at Heart

I'm not sure whether Puresteel Paladin even listens to low-fi indie rock. My guess is he and the rest of the Mirran resistance are too busy hanging by a thread to enjoy some tunes. The Phyrexians, on the other hand? They've won the war and have some extra time to kill. (Phyrexians don't waste time. They kill it.) I'd guess their tastes lie in metal and its various subcategories. The black faction gets doom metal, blue gets thrash metal (seriously... those are some well thought out compositions), green gets acoustic metal (which exists... Rodrigo y Gabriela, anyone?), white gets neo-classical metal, and red gets metal as it was understood forty years ago (the energy and passion of Zeppelin, Deep Purple, etc.). 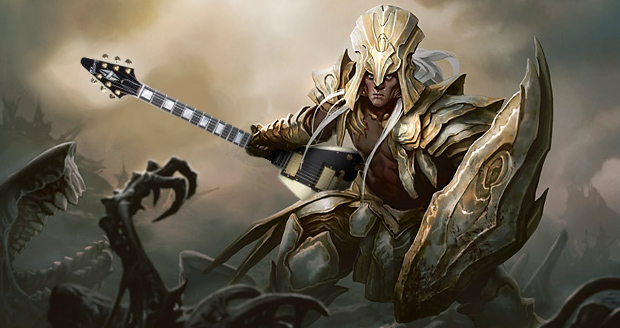 Musical tangents aside (I'd love to go on them more, but I digress further!), Puresteel Paladin is quite amazing. For each Equipment that drops onto the battlefield under your control, you'll get a card. And if you control three or more artifacts, any creature can just sidle over and pick one up, free of charge! Overall, pretty astounding.

I was hoping I'd receive some fun ideas from you all, and I wasn't disappointed. In fact, I was very appointed. Dan Sibley emailed me with an extremely synergistic deck that took full advantage of the Paladin's first ability. Take it away, Dan:

I opened up a Puresteel Paladin at the Prerelease last weekend, and immediately thought the card to combo with it would be Sword of the Meek. To make the combo repeatable, I would need to add a sacrifice outlet and a source of 1/1 tokens. I found a matching pair in Krark-Clan Ironworks and Pegasus Refuge. These four together will give you a huge pile of Pegasi and put any card you want from your deck into your hand.

Here's the combo: When you have all four in play, sacrifice the Sword to the Ironworks, then use that mana and discard a card to make a Pegasus. The Sword returns from the graveyard and the Paladin replaces the card you discarded. Repeat this until you have enough tokens to kill your opponent and have your singleton Burst of Speed in hand, cast it, and swing for the win.

You can also use Thopter Squadron instead of Pegasus Refuge. Then you have to sacrifice the tokens, but you don't have to discard, so you can use Spiraling Embers for the killing blow.

Great stuff! The only change I wound up making to Dan's deck was subbing out Thopter Squadron for Pentavus (more expensive, sure, but Dan was already running Kuldotha Forgemaster. Pentavus is a bit more versatile as well.) The rest of it is Dan's though.

4 Puresteel Paladin 4 Sword of the Meek

As you can see, Dan protected his combo with a full four Pact of Negations, and has four Gitaxian Probe, the new Peek on the block, to make sure the way is clear. Using cheap artifacts like Memnite, Kuldotha Forgemaster is able to quickly find everything but Pegasus Refuge (including a fun singleton of Akroma's Memorial!)

Lots of cards made my jaw drop during my scanning of New Phyrexia. Karn Liberated was one. (His Lab blueprint should show up within the month. At least, it better. Got that, subconscious?) Viral Drake actually won the award for Most Hyperventilation-Inducing—one of my favorite mechanics ever (yep, really)... on a repeatable activated ability (one of my most sensitive Johnny areas in all of Magic)? I experienced at least 117 seconds of mouth frothing. 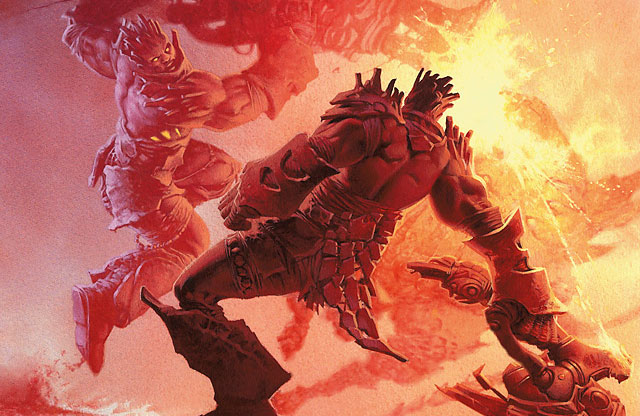 Close behind Viral Drake, though, was Bludgeon Brawl (about 100 seconds, give or take.) Open ended cards like this make for ripe deckbuilding potential, and readers who emailed in had similar thoughts on how to take advantage of the Brawl. One of the major ideas was Kemba, Kha Regent, or any similar creature that loves having lots of Equipment attached to it (Goblin Gaveleer, Loxodon Punisher, etc.). Suit any of those guys up with cheap artifacts like the artifact lands, or Darksteel Relic (which is therefore not useless. I'll check that off my list) for big bonuses. Puresteel Paladin slides in perfectly to this sort of Equipment-focused deck as well.

My favorite idea that people brought up, and indeed one I thought of as well, was to get fellow Johnny monolith Mycosynth Lattice onto the battlefield at the same time. Now all lands are Equipment, with an equip cost of zero. Equip them all to Kemba for lots o' cats. Equip them all to anything that's also wearing a Golem-Skin Gauntlets (ouchie.) Use Manriki-Gusari or Hammer of Ruin as a slow but grinding land-killing machine. And, as this paragraph's finale, I give you... Vulshok Battlemaster! Suddenly... bizarrely... all non-creature permanents on the field are equipped to a hasty Battlemaster. With the Gauntlets also equipped, that's one huge, hasty attacker out of nowhere.

If that's not insane enough for you, how's this? Before you end your turn and your opponent gets a window of time to unequip all his or her lands, move all your lands to other creatures, then Strip Bare the Battlemaster postcombat! (Turn to Slag works as well, but it's a tad expensive to cast both red cards on the same turn.) That's a one-mana apocalypse. Who knew Strip Bare had that kind of potential? Infinity, that's who.

Jonathan Sheets sent me a fun deck that stuck many of these ideas together. I altered it slightly, upping the land count from 19 to 22 and adding a singleton Strip Bare. (Couldn't resist.)

...a.k.a. the hardest reality show ever. Contestants would actually get massacred (or completed) onscreen. Incidentally, the show would set ratings records. 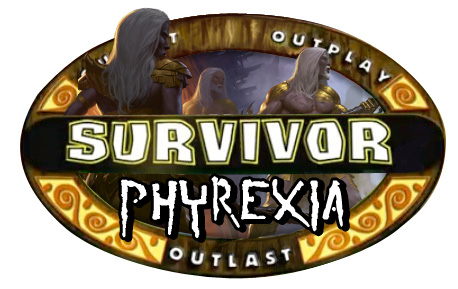 Auriok Survivors stood out to me especially during my scan of the set, as all of the cards that I write about do. Returning Equipment from the graveyard back to the battlefield could be interesting. Were there any Equipment that did neat things whenever they hit the 'field? Turns out, there are. The living weapons (of which there are now nine) make Germs. Interesting, but the Survivors' ability is a one-shot effect... or is it?

I then turned to Nim Deathmantle. For four mana, this lovely Equipment lets any dying creature put it on and return to the battlefield as a zombified version of itself. Funnily enough, I'm using the Deathmantle as half of my engine, not as my Survivors target. (Of course, if it was Shattered, the Survivors can salvage it. There's usually a method to my madness.)

What's the other half of my engine? None other than Johnny stalwart Ashnod's Altar. Sacrifice a Germ token (from Flayer Husk, let's say) and Auriok Survivors to the Altar for four mana. Spend that mana on the Deathmantle trigger and bring back the Survivors. With its trigger on the stack, sacrifice the actual Flayer Husk to Grinding Station to mill three cards. The Survivors will then bring back the Husk, which will make another Germ token. The Station will untap, resulting in infinite milling. You can't have the Survivors don the Husk, though, or the Germ will die.

I just adore five-card combos. Of course, they need a bit of set up. Stoneforge Mystic can tutor for the Flayer Husk and the Deathmantle, and Fabricate can find the Altar and the Grinding Station. (Yeah, yeah, it can also find the Equipment. Redundancy is a good thing.) Mulldrifter is quite fun with the Deathmantle as well. Assemble your pieces, and then enjoy the wonder of going infinite.

Speaking of living weapon, the craziest one yet is turning heads. And then battering them. Batterskull starts out as essentially a 4/4 with vigilance and lifelink for

. Pretty sweet. And if the Germ bites the bullet, you can attach it to something else. If there isn't anything else, promptly pay

and return it to your hand! 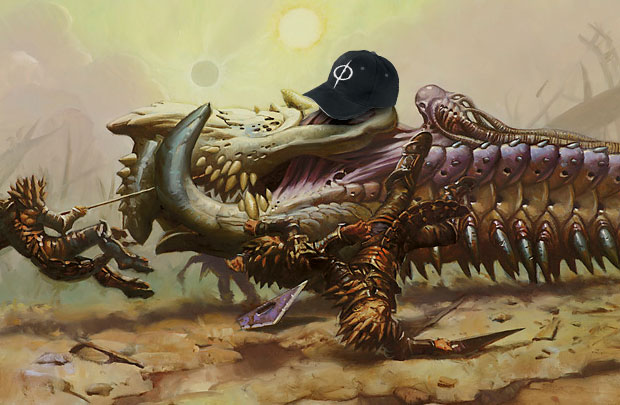 Looks like a straightforward beatdown card, right? Hmm. Okay then, I'm just going to make infinite mana with it. You see, Batterskull's last ability was taunting me. It was practically tattooed on the back of my eyelids (a new Phyrexian trend). I began hearing disembodied voices moaning, "Breaaakk meeee..." They echoed. And echoed. Until I finally thought, "Mana Echoes!"

If I have seven other Germs out, when I cast Batterskull, Mana Echoes will resonate with eight colorless mana. Use three of that to return the Batterskull to my hand. Use the final five to cast Batterskull again, this time making nine mana with Echoes. Repeat ad infinitum. Oh, and Veteran Armorer is around to keep my Germs alive without Equipment.

The trouble is getting seven other Germs to stick. Fortunately, earlier this year I built a deck that tried to make as many Germs as possible, using cards like Doubling Season and Rhys the Redeemed to explode their population, while Veteran Armorer kept them alive. Cast lots of living weapon cards, double the Germs with Rhys, and you should have seven in no time. 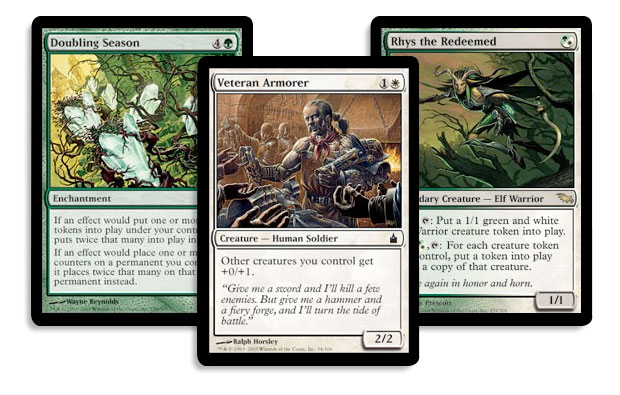 Puresteel Paladin is a workhorse today. Since Mana Echoes can often pay for Flayer Husks and Mortarpods by itself, adding the Paladin turned the deck into a fast-paced monster. Changelings are versatile with Mana Echoes as well. Especially Mirror Entity, which becomes the perfect mana sink. Swing with infinitely powered Germs!