ey there, to everyone who has stopped by From the Lab once again on a Wednesday! If you're new to the shenanigans, here's a quick low-down: kooky decks, wacky synergy, the use of forgotten cards, and ...LOOK OUT FOR THAT PREDATOR DRAGON BEHIND YOU!!!! 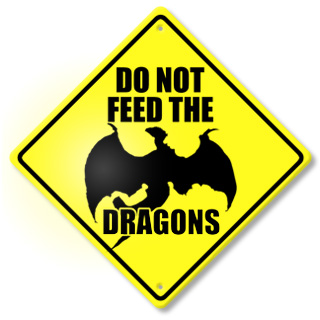 ... Sorry, newcomers. No, I don't let dragons run loose around the lab (although a dragon zoo would be beyond awesome). I'm pretty sure that was the same 16/16 Predator Dragon from last week's final deck. What can I say? It followed me home.

Okay, I'm stretching the truth. Or lying. Or desperately rambling through this introduction. Before my ADD-worthy attention span turns to something else entirely, the plan for today is this: I'm just going to pretend it's not a non-theme week, and instead it's Jund Week II, as symbolized by that Predator Dragon that's currently sniffing behind your shoulder. When coming up with Jund Week material, I realized that there were a lot of build-around-me cards specifically in the color green. I ultimately opted to indulge the red side of Jund last week, and save the jade goodies for this week. As you all can probably guess from today's corny column title, that's just how it turned out. (What do I mean by Highlander tides? In time, singleton suitors, in time.)

Before we hop into all things mana and plasm (possibly in the same card), let's talk green a bit. I've been reading nearly every article on magicthegathering.com every week for quite a while now, and this practice has not stopped during my tenure here in the Lab. I've also always been a curious onlooker on the mysterious dessert known as the color pie, and even though one color has always warmed my heart the most (do I have to say it?), all five colors truly appeal to me. It should be no surprise, then, that I've pored over Mark Rosewater's five color interviews during these theme weeks. I would have talked more about this during Naya Week (green's scheduled time to shine) but a certain Bob had a tale to tell.

According to Mr. Green's behind-the-scenes interview, two major themes in the viridian-tinged philosophy are nature and life. Besides the behemoth I have for you as today's last deck, I found it fun to tap the Manaplasm- and Mycoloth-based decks into these themes. From the cards themselves, it's clear they hit the desired target. Manaplasm thrives off of nature, and the mana that is gleaned from it. Land essentially feeds our favorite sludgy ooze. Mycoloth, on the other hand, proves itself a master of the circle of life. It both takes the life of your own creatures when devouring them, and creating tons of Saproling tokens, all the while looking like a cross between Man-Thing and King-Kong. For today, I figured I'd mostly combine this aspect of green with everything spunky I like in red.

Basically, what I'm saying is that I've got a Vorthos streak at least a couple blocks wide, as opposed to my miles of Johnnyness. Believe me, tapping into your creative side is worthwhile, and sometimes it helps you build wackier decks. Did this experiment pan out? Tune in next paragraph to find out! 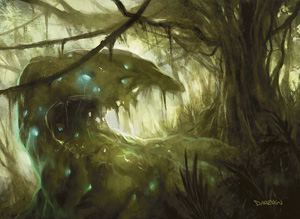 Some surfers say that the hardest waves to successfully board are the tight, looping ones with lots of rough edges. These surfers have obviously never met Manaplasm, which (according to the card art) is a giant wave of ooze that (according to the flavor text) has already claimed one victim and can (according to the card text) totally crush opponents in various ways. I even saw Manaplasm put an opponent's wife's hand into a jar of acid once. At a party. This thing is a beast.

Assuming you have a four-drop (say, oh, Chameleon Colossus) ready to go the turn after you've played Manaplasm, the enthusiastic ooze becomes a drawback-less Phyrexian Negator. With a five-drop after that, you've potentially dealt a total of 15 damage already (the 'Plasm becomes a 6/6, and the Colossus deals 4.)

Now, one major negative to Manaplasm (and Chameleon Colossus, I guess) is the distinct lack of trample. Both creatures are both pumpable and powerful, and yet they can be stymied by random chump-blockers. I considered Primal Rage, but it was far more useless than useful. To prevent any losses to The Hive (which would definitely be a feat) I gave the nod to Glarewielder. It costs the same amount of mana, outlaws potential blockers for your beasts, and has evoke (more on this in a bit.)

How's this for a combo: Manaplasm + Tower Above! Pay only three mana for the jaw dropping sorcery to turn Manaplasm into an 11/11 trampling, withering, and provoking juggernaut! As awesome as that is, that interaction is 1-upped by Sangrite Surge, notorious Shards of Alara Limited bottomfeeder. The Surge turns Manaplasm into a 10/10 double striker. Last I checked, that should be enough to win. And of course, now that we've committed to red, Flame Javelin is an obvious add (hello awesome removal!)

Along a similar line as the 'colorless hybrid' spells lie the excitable evokers of Lorwyn and Morningtide. By paying the evoke cost, you're still playing the spell, so Manaplasm will get the full +5/+5 boost for Glarewielder. Spitebellows works just like a Flame Javelin here (and is fine on its own.) I knew I'd hit the jackpot when I found Briarhorn, though. Hello massive power boost!

Another card I added was Inner-Flame Igniter, just in case you couldn't find any pump spells.

After rounding the deck off with mana acceleration, here's where I wound up.


This is only Standard, of course. One of the best blocks ever for alternate play costs sadly just rotated out, but in Extended the various suspend spells would be worth a try. The basic set of red and green time counter tickers should suffice (Greater Gargadon, Search for Tomorrow, Rift Bolt) but I would personally be excited about finding a use for Cyclical Evolution. Other possible adds could be War Elemental, which could develop the already-present Elemental theme in there. If you do decide to go with more Elementals, Primal Beyond (which I almost included) should be an auto-add.

Mycoloth is the final rare creature with devour that I have left to talk about. All the rest were carefully tossed into the Endrek Sahr, Master Breeder deck from last week. Now, if you wanted, Mycoloth would be perfectly fine there: It makes more tokens for devouring purposes and can be transmuted for with Brainspoil. However, I believe Mycoloth fits well enough with a forgotten Dissension mechanic that I'm going to build a deck around this interaction. I'm sure I'm not the first to consider pairing Mycoloth with graft, the lovely +1/+1 counter based ability reserved for the Simic population (who, if I recall correctly, has a certain synergistic Ooze of their own.) Now, you cannot stack any triggers here, since the devour ability is an "as" comes into play effect, unlike graft, which has the more common "when" within it. However, as Ravnica Block drafters knew too well, token creation and graft go hand in hand, making bigger tokens by downsizing your graft guys. Mycoloth is perfect here, by both making said tokens and wasting all your depleted grafters.

If this isn't firing up your wacky buttons, read on. Ever since Doubling Season was printed, whenever a card that deals with both +1/+1 counters and creature tokens is printed, Magic players everywhere have an obligation to say, "That would be nuts with Doubling Season." And then they laugh, but never use the combo, citing reasons such as, "...too nuts." You know what? Doubling Season is not only totally bonkers with Mycoloth, but also with graft, so I'm using it.

Ulasht, the Hate Seed seems, to put it lightly, decent with Mycoloth. Putting it heavily is far more fun, though. After gumming up the board with tons of Saprolings, play the newly dubbed Hellion Hydra to potentially create either far more Saprolings, or a cartload of damage. When Chris Millar talked about Ulasht, the Hate Seed way, way, way back, Cloudstone Curio was a key addition to the deck, making for possible replays of Ulasht, the Hate Seed and even more tokens or eye pokes. With all the tokens being created here, returning Mycoloth for a titanic devour seems freaking awesome. Since I'm also running Firespout (mass removal is fun!) it's a wise play to devour all your guys vulnerable to the 'Spout, and then just make even more next turn.

Only running one creature with devour seems silly, so to shake things up I went with Thunder-Thrash Elder, who's both cheap and deadly. Here's a Shards only combo I've been saving: Mycoloth + Sarkhan Vol. Tokens plus Fires of Yavimaya effects sounds like great fun to me. Threatening a creature is nice if you've a devour guy in hand. And now the synergy comes full circle: Doubling Season can allow you to have 8 loyalty counters immediately on the planeswalker, meaning, yep, dragons.

I tried to build around Kresh the Bloodbraided. Really. The problem was that I'd basically already done it, except with the arguably superior Sek'Kuar, Deathkeeper way back in my Coldsnap farewell article. Sure, Kresh gives himself potentially more +1/+1 counters, but the Orc offers consistency by creating tokens. Basically, I've already gone down that road.

Shifting borders for a second, I've received a couple emails about the Naya Week poll, stating that the Mayael the Anima deck was their true favorite, but since it wasn't completely Highlander, they felt it couldn't be the top choice. To rectify this unfortunate error (although, as always, my feelings won't be hurt if you change a couple cards in the decks; in fact, I encourage it!) here's a Standard Kresh (Elder Dragon) Highlander deck!

"The vast network of predation on Jund has actually cause some strange creatures to adapt to being eaten."