Gruul to be Kind

elcome to the Lab! It's time for Gruul Week here in DailyMTG.com, and I'm kicking things off with a pair of combo decks that Borborygmos could be proud of. Red and green are the two colors best known for smashing, and many players don't look any further than that. However, there are combos to be found in every color combination, and Gruul is no exception. Even the ultimate Timmy guild has a few tools for Johnny hiding in the background.

What Doesn't Kill You Makes You Stronger

The first deck I'll be looking at was inspired by the first Commander deck I ever built. It was a Gruul deck led by Borborygmos himself for a time. In one game, I was pretty far ahead on board but didn't quite have enough creatures to kill one of my opponents without risking a lethal counterattack from the other. I drew for my turn and got a Savage Twister. At first I was disappointed. Clearing the board wouldn't help me win the game. With several cards in hand each, my opponents were sure to recover faster than I could. Then I saw that I had a Vigor on the battlefield, and a whole new world of possibilities opened up. One giant Savage Twister later, my creatures were enormous, and I was able to kill everyone in one attack.

Although Vigor is unique in its particular ability, we have better cards than Savage Twister to work with these days. Although I used it last week as well, Blasphemous Act once again comes to mind as a way to deal a lot of damage to your own creatures for not much mana. Putting thirteen +1/+1 counters on all your creatures seems like a surefire way to end the game, especially since your opponent's creatures will all be dead. Although not particularly likely to make it all the way to 13, Chain Reaction can also deal a large amount of damage for the low price of four mana. Even if your opponent doesn't have any creatures to help you out, you'll usually be able to deal 5 or 6 damage to each of your creatures, making them plenty big enough to swing in for the kill.

Of course, we'll need some creatures on the battlefield to make all this happen, and Vigor's six-mana cost is potentially problematic. Fortunately, Llanowar Elves can help with both of those problems, and so can its pals Arbor Elf and Birds of Paradise. We'll also be recruiting some minions from the Eldrazi. Nest Invader and Kozilek's Predator give you your choice of extra creatures or extra mana and leave you with one reasonable-sized creature either way. Even a 0/1 Spawn token can become lethal with thirteen +1/+1 counters on it.

Just in case you can't find Vigor, we'll include a backup combo. Repercussion will hurt your opponents every time you hurt their creatures, making a Blasphemous Act lethal if they have two or more creatures on the battlefield. Unfortunately, whereas the Vigor combo wants you to have a lot of creatures, the Repercussion combo wants you to have none. Goblin Bombardment can remedy that problem, letting you sacrifice all your creatures before they can be dealt damage.


It'll Pay for Itself

Burning-Tree Emissary is a card that proves the Gruul are more than just face-smashing, bone-crushing bruisers, and its flavor text seems to hint at its combo potential. 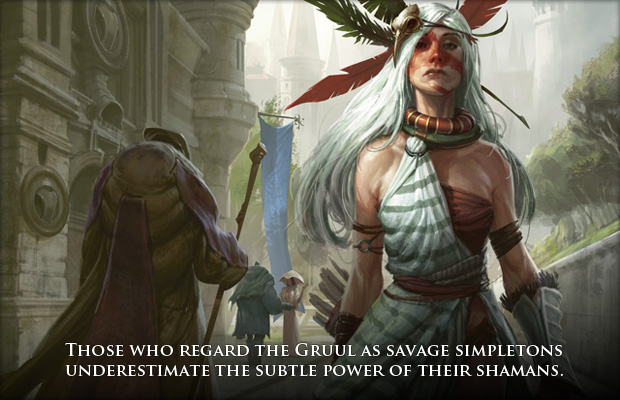 The Emissary is the latest in a line of cards that pay for themselves, starting with Priest of Gix in Urza's Saga and followed up with Priest of Urabrask in New Phyrexia. These creatures are prime candidates for silliness, since they can cast themselves over and over again if you can return them to your hand. I looked at several ways of doing this, but in the end came back to the old combo staple, Cloudstone Curio. With two of these "free" creatures, you can make them bounce each other indefinitely. That won't win you the game by itself, but Pandemonium will fix that quite easily. Casting your creatures an infinite number of times means infinite damage from Pandemonium. Warstorm Surge can play backup, giving you two extra copies, albeit more expensive ones. Birds of Paradise and Gemhide Sliver should help compensate for that, and will also ensure you have the black mana for Priest of Gix. We'll also toss in one Utopia Tree, so you can find a mana-producing creature with Signal the Clans if you need to.

If you can't find a Cloudstone Curio to go infinite, Thromok the Insatiable can devour five creatures and kill your opponent in one shot from Pandemonium or Warstorm Surge. With so many creatures that give you mana for more creatures, it shouldn't be hard to put five of them onto the battlefield to devour. The last piece of the puzzle is Signal the Clans. With it, you can search for Burning-Tree Emissary, Priest of Urabrask, and Priest of Gix, ensuring that you get one of your key creatures no matter what.

The Gruul love fighting, whether with their enemies or with each other. Fortunately, I have the arena prepped and ready for a nice bloodbath, so I'll be quite happy to let them battle for dominance and for Gruul. The competitors are ready, so let's ring the bell and get this party started.

The Priests of Pandemonium cast Signal the Clans, choosing Utopia Tree, Birds of Paradise, and Gemhide Sliver and getting the Sliver. The Priests took 2 from Overgrown Tomb and cast the Sliver before ending the turn. Vigorous Act cast Repercussion and attacked with Vigor, Nest Invader, and Arbor Elf for 9 damage. With Repercussion to make blockers useless, the Priests of Pandemonium died to the next attack.

In true Gruul spirit, I'm holding a free-for-all competition for all you avid deck builders out there. Your task will be to construct a combo-licious deck based on the Orzhov guild. I'll pick a few of the best ones and feature them here on From the Lab!

So grab your ghosts and don't forget your extort triggers, and be sure to get those entries in before next week's column goes up. I look forward to seeing what you guys can come up with!