fter two weeks of merrymaking and indulgence in all things snow, presents, family, music, friends, delicious food, and lampshades on heads, I'm quite thrilled to emerge from the 2010 holiday season and into a fresh new year—2011, to be exact. There's always something exciting about a new year; a brand new twelve months of time, the contents of which will reveal themselves, second by second. It's even more exciting when you're slinging banter with close friends at various festivities. My favorite fragments of wordplay on New Year's Eve were "Finally, a prime number!" and "You know, now that we're in the twenty teens, we can't have those glasses with the double zeros anymore ... bummer." 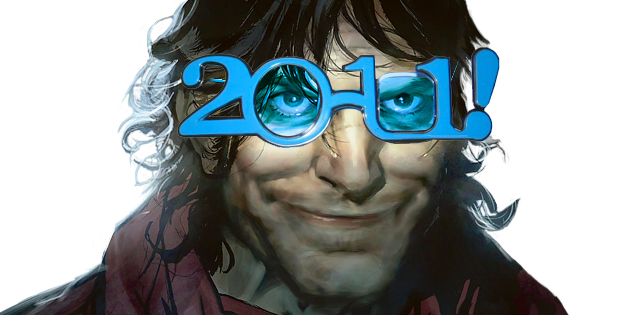 But don't worry, Magic is still at the forefront of my mind despite the new year. And 2011 seems to be signaling some very exciting things for Magic in general. First off, we have Mirrodin Besieged coming out in a couple of weeks, the previews for which should be ever so juicy. Meanwhile, my dreams of a trilogy-ender for the various multiplayer releases (Planechase, Archenemy) were realized when Magic: The Gathering Commander (due this spring) was announced. A new Duel Decks joins the fun (this time pitting Knights against Dragons ... can I be the totally-first person to predict Hunted Dragon?) as well as the obvious finisher to the Scars of Mirrodin block. As of now, we're waiting for the war between the Mirrans and the Phyrexians to finish and henceforth name the set. Can I assume that in some distant corner of the Multiverse, the war is quietly raging? Probably.

In spite of all this coming excitement, the early weeks of January usually qualify for "calm before the storm" status. By now, I've exhausted most of the ideas present in Scars of Mirrodin, and have not one but two ghastly non-theme weeks to come up with something to keep the torch burning until previews for Mirrodin Besieged begin. Think, Noel, think! Holidays ... cool new Magic stuff ... is there no mercy for my waning deck-building schtick? 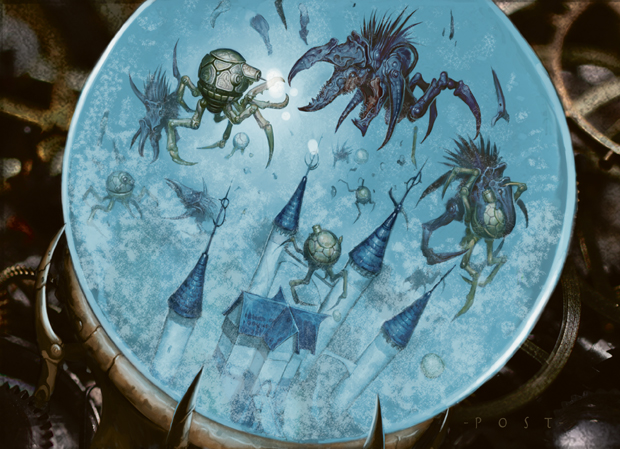 I'm referring, of course to the latest (and easily the funniest) Happy Holidays promotional card that is released every holiday season (at least since 2006.) These cards all have a twisted holiday theme bent into their Magical DNA. I like to think of it as a yearly Christmas card from the minds behind the Un- sets. These holiday cards are the perfect creative release for silly, totally Un- (and totally fun) cards in a time where a third Un- set seems rather ambitious (though I still have hope!) 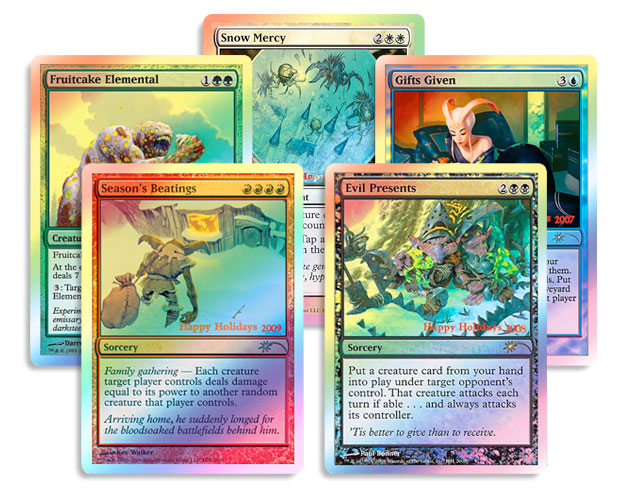 So, since this tradition began in 2006, there are currently five of these wacky cards. And curiously enough, there's one for each color! In order of release, we have Fruitcake Elemental, Gifts Given, Evil Presents, Season's Beatings, and Snow Mercy. I thought it would be fun to deck-build around these five cards today, just for kicks. And to combat the boredom of early January, which is already slowly sinking in. Let's do this.

We'll begin with Fruitcake Elemental. My, what a grouch, dealing 7 damage to your opponent at the end of every turn like that. That's why this big boy comes with a Jinxed Idol-esque giveaway clause. Of course, giving away an indestructible 7/7 for three isn't always a great plan. All in all, Fruitcake Elemental is surprisingly tricky to build around. 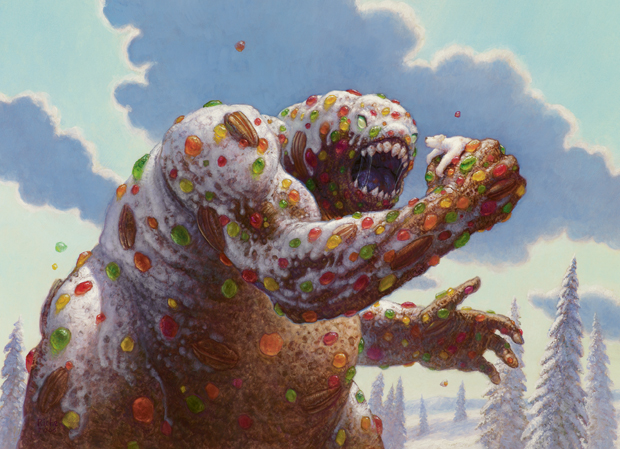 One of my first ideas was to give Fruitcake Elemental to my opponent, and then cast Pithing Needle naming it. Since the give away ability is an activated ability, the Needle Piths it from existence, leaving your opponent with 7 damage every turn. Of course, the same could be said of me if I don't put a blocker in front of it every turn. Since it doesn't have trample, I feel comfortable placing Fruitcake Elemental in a token strategy esque deck. Just throw a Saproling in front of it every blockers step. 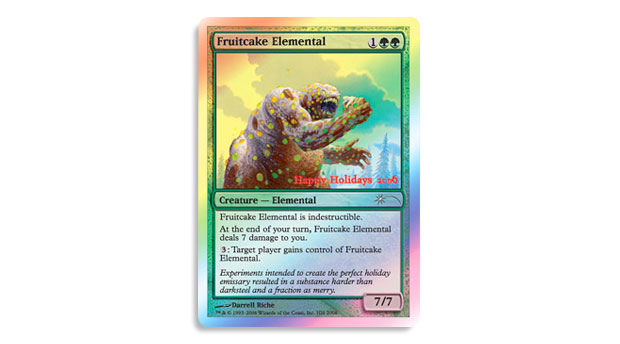 If you wanna try and bash with Fruity the old fashioned way, you'll need ways to stomach the 7 damage. Sun Droplet is great in general, and here it at least numbs some of the pain over time. Angelheart Vial is a similar card from Rise of the Eldrazi that I haven't tried yet. Giving Fruitcake Elemental lifelink is another way to even out the 7 damage. Plus, if you attack as well, you'll be gaining a bonus 7 life! I think I'll go with Behemoth Sledge as my lifelinker of choice, as it also can give trample, an ability Fruitcake Elemental desperately wants. Tower Above works in a pinch as well.

Mercy Killing is a neat out for Fruitcake Elemental if you need him gone for some reason. Plus, seven tokens!

Gifts Given is a funny riff on the classic Gifts Ungiven, Spike card galore. Seeing this tourney staple bent into a wacky uncle version makes me tingle. Except when it comes to actually deck building around it. 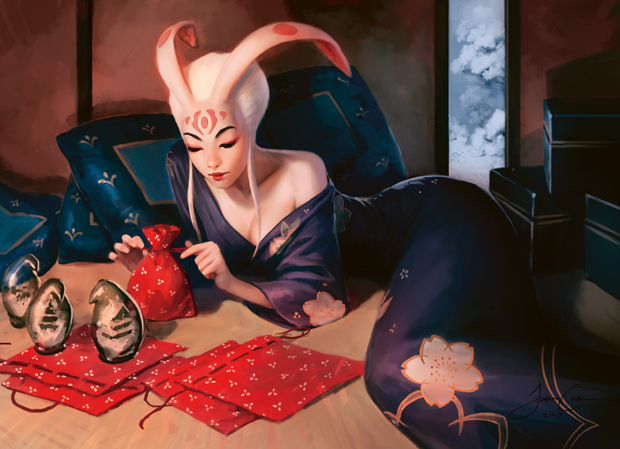 See, Gifts Given is certainly fun during its actual casting. The thrill of sifting through your opponent's library, selecting four different tasty cards, and making your opponent choose which ones to bin and which ones you get (!) sounds deliciously evil. But it doesn't make for a great deck-building card, since ideally you'll be winning with your opponent's cards! 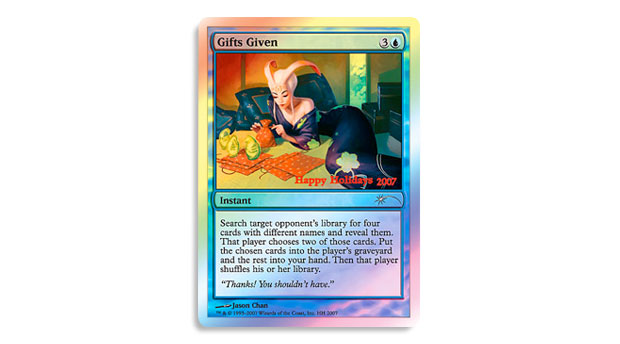 So respectfully, I'm skipping you, Gifts Given. Apparently your bloodline and I are destined to repel each other.

As Opposed to Good Presents ...

Evil Presents! This card is funny and quite interesting from multiple angles. I was so enamored with this card that I wanted to use it alongside the new hugest fatties in all of Magicdom, the Eldrazi. ... Oops. This was a while ago, but I still feel I must rectify my mistake. 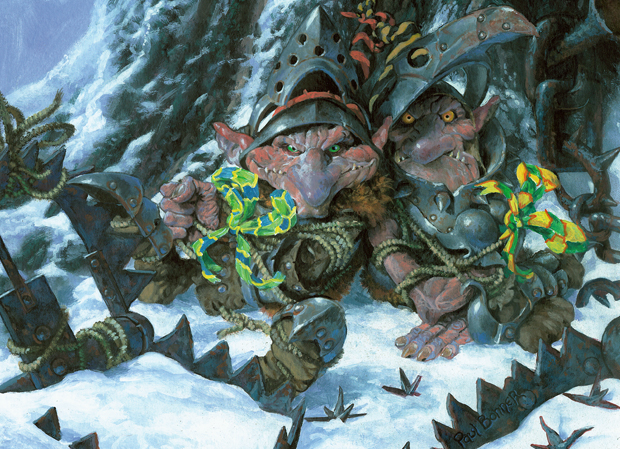 I began by looking for creatures that had bonuses whenever it attacked, or any creature that referred to a "defending player" (who, in this lone case, would also be the attacker. Nifty.) I began with black creatures, and re-stumbled upon Ebonblade Reaper. Even back in the day, this was a hard card to manage. Now that your opponent is taking both the attacking penalty and the damage penalty, you can sit back and watch with glee. 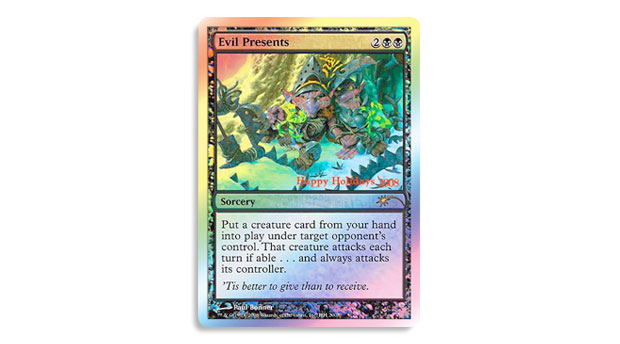 Of course, good old fatties work too. I was absolutely delighted to find a place for, of all things, Shrouded Serpent. This Prophecy would-be game winner never really saw the light of day (like other Prophecy would-be Magic cards). If you Evil Presents it over to your opponent early on, your opponent (the defending player) has to choose to pay four each combat phase, or it's a five turn clock. Not only does paying four eat up a ton of mana (especially early on) but a 4/4 isn't easily dealt with.

How about Hellcarver Demon? Unless your opponent's top six is insane, that could be game. And Nix can save you in a pinch. (Okay, I just wanted an excuse to use Nix. You caught me.)

Of all the Holiday cards, Season's Beatings emotionally affected me the most. Sure, the freaking four red symbols in its mana cost didn't hurt. But the art, flavor text, and best mechanic ever—family gathering—all combined to make me say, "SO TRUE!" 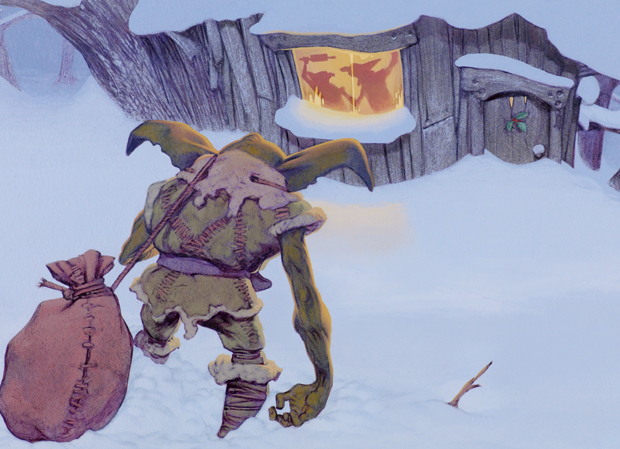 In game play, I'd ideally like to use Season's Beatings as a directed board-sweeper. Hopefully my opponent has enough creatures to fight each other. Enter Forbidden Orchard and the Hunted creatures. I never thought I'd mention Hunted Dragon more than once in an article. 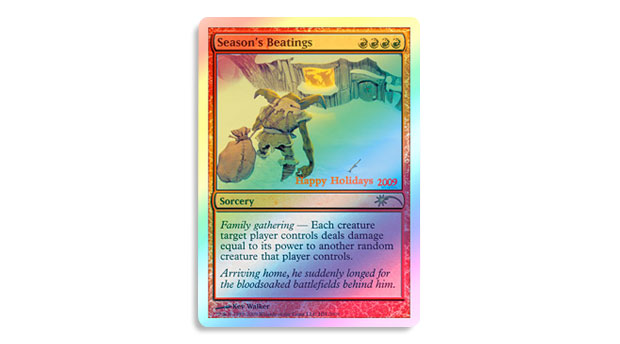 An evil idea (which, naturally, I'll execute) would be to animate my opponents lands, and then have them beat each other up. Ramp up to seven mana, then cast Natural Affinity followed by Season's Beatings. The animated lands will randomly all kill each other. Sweet!

Finally, to give the deck a way to actually win the game with just one casting of Season's Beatings, I turned to forgotten rare extraordinaire Repercussion. WHAMMO. Who knew family gatherings had bad repercussions?

Home for the Holidays

Since we're already batting wacky, I threw a copy of Incoming! In the deck. Follow up with a nice family gathering and watch the havoc unfold.

Snow Mercy is pretty hilarious, let's face it. What else do you do with snow globes except shake 'em? I think the top down concept here is that if a creature dares to damage you, it'll get trapped in the snow globe, ready to be shaken up at will. Just tap, untap, tap, untap, and tap! (Or "T, Q, T, Q, T" for Oracle-ites—not that Un- cards have Oracle wordings.) 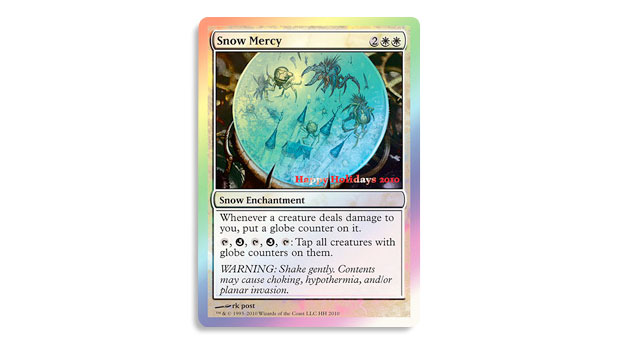 Building around such an inherently defensive card seems problematic. In the end, I went with a white-blue controllish build that eventually seeks to win with giant Wake Thrashers. One activation of Snow Mercy will pump a Wake Thrasher by +2/+2. And activating it in the first place taps down a bunch of blockers. Hmm ... synergy! Some snow themed cards round out the deck.