ey all, and welcome to the new world of Magic! Hopefully you'll have played this game before, but if not, don't worry: Zendikar, the set that has been slowly previewed over a three-week span, is also a newbie to the tables of casual players. And as longtime From the Lab readers will know, there's a certain tradition that I like to follow with every new large set's release.

I'm talking about the budget-conscious conundrum called House of Commons, first kicked off two years ago by my friendly predecessor Chris Millar. In this series, every common of a new large set (in this case, Zendikar) is used in a multitude of decks. Easy, right? Here's the tricky bits: No other rarity of the set can be used (example: no Nissa Revane + Nissa's Chosen shenanigans), and each common must be used exactly four times. This means I can't put 4 copies of Harrow in each deck, and actually must use Spreading Seas 4 times. For more articulate explanations, go ahead and visit the links to the Lorwyn, Shadowmoor, and Shards of Alara editions of this series. Right now, I've got ten decks of liteness to lay on the table, so let's kick it Zendikar style!

This deck is one of four mono-color decks that I wound up making, which was a major departure from the multicolor heavy Shards edition. This particular one is mono-blue, with some controlling elements such as counterspells (Spell Pierce, Cancel), bounce (Whiplash Trap), and creature lockdown (Paralyzing Grasp.) The win conditions are beefable Windrider Eels and Shoal Serpents. To draw into lands for these creatures, I turned to Reckless Scholar and Ior Ruin Expedition.

Let's skip across the color wheel, shall we? That brings us to my mono-green creation, which aims to accelerate into either creatures with kicker (Mold Shambler, Oran-Rief Recluse) or good old fatties (Vastwood Gorger, Timbermaw Larva). Khalni Heart Expedition is your accelerator, and Nissa's Chosen can hold down the fort until your late-game creatures do the job.

Moving on to the inky black tribe of Vampires. The tribal theme is actually only represented by Mindless Null (ha?) but this deck plays like a mini Suicide Black deck, beginning on turn one with the Carnophage throwback Vampire Lacerator and his Guul Draz Vampire friend. Turn two hits just as hard with the intimidating Surraker Marauder and Blood Seeker, and Crypt Ripper and Vampire's Bite add to the pain.

From Vampires to Kor. I knew when I made the Kor deck I'd have to use almost all the Equipment in it for Kor Outfitter interactions. Weapons like Adventuring Gear and Explorer's Scope beg to be attached to Steppe Lynx, if not simply a Kor Skyfisher (which can bounce lands for the Lynx.) Kor Cartographer was an easy addition to the mono-white deck, in order to ramp into a kicked Bold Defense. (Sick.)

From the monocolored decks that I made to the dual-colored ones! Oddly, only one of the four of these decks turned out to be allied colors. I guess my puzzling subconscious is drawn to the enemy colors, which explains why the new enemy fetch lands excite me so!

Let's go green and red for a bit here. This deck is all about landfall: A whopping twenty cards in the deck (over thirty percent!) bear the latest ability word, and in this case, they wield it perfectly. Plated Geopede is frightening as a 3/3 first striker bashing in on turn 3, and Zektar Shrine Expedition can get painful quickly. Grazing Gladehart can keep you afloat, and Territorial Baloth knows how to pound. Normal creatures, like Zendikar Farguide and Shatterskull Giant, can become terrifying as well thanks to the cheap and deadly Vines of Vastwood. This deck might have used some mana acceleration, but the mana curve isn't too astronomical: there are 12 two drop threats! As long as you keep hitting your land drops, you should push into a victory.

Moving to the next deck, switching the green for blue. This deck was one of those stragglers that was built late in the process, and as such got saddled with weird numbers and Caller of Gales. Still, I made room for some of the more potent commons. The deck aims to control your opponent's creature density with Kraken Hatchling and Into the Roil while keeping an eye of the skies with Tempest Owl and Sky-Ruin Drake. The former is a fine two-drop but is phenomenal late game. The latter is a flier with a big butt that is probably the main win condition of the deck. Meanwhile, Spire Barrage accounts for most of the deck's Mountains by itself, but Slaughter Cry is a fun, surprising instant that keeps with the subtheme of combat control.

Keeping with the red as long as I can (because that's how I roll), let's move to another enemy-colored deck. This one is red and white, and it is aggressive. Starting on turn one with the seemingly bland Goblin Bushwhacker and moving up the mana curve creature by creature (Cliff Threader, Torch Slinger, Pillarfield Ox), this deck has got legs. It also has some tricks in its armory, with Shieldmate's Blessing being a cheap combat trick, and Burst Lightning a flexible burn spell. Seriously, this lightning is so flexible it can bend around corners. Should it be a Shock or a Lightning Blast? It depends on the situation, of course, but the choice is there.

Kor Hookmaster is one of my favorite commons in Zendikar. I knew when I saw it in the spoiler that it would be quite good against simple creature decks. Some decks just really depend on doing something with that second-turn creature, and the Hookmaster prevents those plans from actually happening. Journey to Nowhere is also a particular common favorite of mine.

Well, the streak of red had to end sometime, so it might as well be now. It gets subbed out for black, which obviously makes the following deck list white and black. I am intrigued and pleased with how the colors turned out. Who'd have thought I'd be making a white and black deck from the commons of Zendikar?

In any case, this deck looks to basically stall and stall some more. There are two early-drop enchantments with landfall in the deck. The Sunspring Expedition is an easy life gainer, and the Soul Stair Expedition brings back dead creatures from the graveyard to your hand.

What creatures are worth bringing back? How about the fort-holder, Giant Scorpion? Or the other fort-holder, Caravan Hurda? Or yet another fold holder, the defensive Noble Vestige? Personally, I like bringing back the deadly Heartstabber Mosquito to kick-kill things over and over again. If anything is annoying twice, it's a mosquito stabbing you in the heart.

Hagra Crocodile is another biggish creature to try to win with. Narrow Escape helps all three landfall cards while keeping your life total within reason.

The Weirder and Wackier

Now on to the wacky stuff. Of course, not too wacky, as we are locked within a restrictive deck formula today. But as always, some of these decks turned out a bit weird. These last two have some funky color combinations and synergy.

This last one is mostly a green and red deck, with a splash of black for good measure. In fact, the splash of black was really what inspired the deck, since I wanted both methods of Grim Discovery to have a use. But how best to get lands into the graveyard? (Creatures were a given.) I went with a combination of powerful spells (Harrow and Magma Rift) and powerful bodies (Scythe Tiger and Ruinous Minotaur.) The efficiency of these cards should reduce your opponent's life total a bit. Molten Ravager was an addition in the name of potentially more pain, and Goblin Shortcutter conveniently provides an alternate route for your attackers to hit your opponent directly, bypassing all those blockers.

Tanglesap is a curious staller, and Goblin War Paint is a slightly pumping enchantment. Harrow can find all three of your land types, as well.

There's one entire subset of Zendikar commons that I've completely failed to mention thus far: the Allies! The latest tribe that thrives on teamwork has enough commons for me to make a nigh-legitimate five color decks using all of them. But what's going to help the mana get fixed appropriately? I went with Expedition Map to get the right land type in your hand.

As expected, all the Allies do similar things. Some put +1/+1 counters on themselves; some give the rest of the pack some sort of temporary benefit, such as vigilance or first strike. At the very end of this process, I was left with two Trapfinder's Tricks and a Lethargy Trap that were without lists to call home. Since this deck has a bit of blue for Umara Raptor, I threw them in. But just to be extra clear: this deck is about doing crazy things with Allies. Sound good?

That's that! Another House of Commons accomplished! Next week I'll take a fuller look at Zendikar, so I'll see you then! 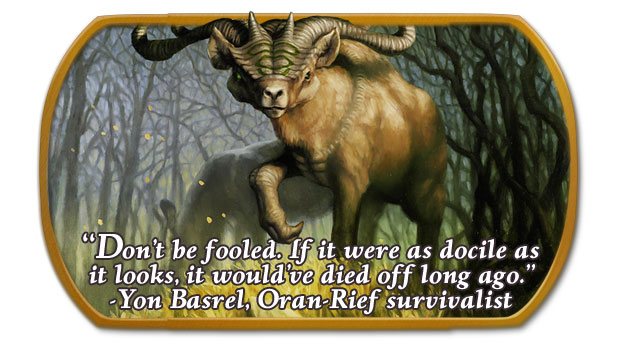