ello and welcome back to the Lab! I hope my absence last week didn't especially jar anyone; I was a little preoccupied with numerous heaping plates of food. Delicious, delicious food. To make up for it, I've got an equal heaping of imprint deliciousness to discuss today. Imprint has always been a flexible and interesting mechanic in my eyes, and thus I was extremely pleased to see it return in Scars of Mirrodin. Some previous imprint cards have impressed me so much that they have actually imprinted themselves permanently on my brain! For example, Soul Foundry, Isochron Scepter, and the mighty Spellweaver Helix are all near the forefront of my list of crazy busted cards.

And the way Scars of Mirrodin has shaped up, there might be some new imprint cards on that list. Prototype Portal is perfect as another spin on Soul Foundry (itself one of the more diverse build-around cards ever printed (imprinted?). Semblance Anvil, as I attested in a previous column, is bound to be one of my all time favorite cost reducers. Clone Shell is a curious riff on Summoner's Egg. And Mimic Vat is obviously the new crazy busted card on the block. I've already seen some pretty fun riffs on this card in casual play, and so I hereby offer a mini-challenge. Send me your most interesting Mimic Vat decks! I won't cover the Vat today, but if I get enough intriguing responses, I'll spend some of next week on it.

For now though, let's get at my decks for today!

Like I mentioned above, I'm a fan of the new Soul Foundry. Prototype Portal has already been a subject of various emails in my mailbag. Most of these emails excitedly pointed out the Prototype Portal + Mindslaver combo. If you have ten mana available and a Mindslaver imprinted on the Portal, you can basically take every turn for the rest of the game. Just pay

to make a new 'Slaver token, then another

to activate it. Boom: Instant solitaire. While this certainly is devastating, building a deck around this combo all but screams "GRIEFER ALERT!" (And I'm saying this as a slight griefer myself.) 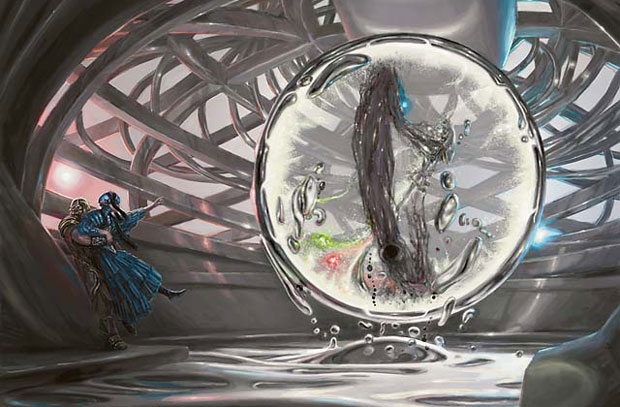 Let's examine some other routes, though. Since Prototype Portal is such a flexible card, there's an overwhelming amount of options. I thought about eliminating artifact creatures to narrow it down a bit, since Soul Foundry could cover those guys, but later revised this to add Arcbound Crusher, which will grow no matter what Portal tricks you pull. I checked out artifacts with "enters the battlefield" abilities and such as well.

My first real idea was, naturally, to combine one imprint card with another. One of the most underrated cards from the original Mirrodin set was Thought Prison. Both a weird initial Duress effect and a unique punisher for your opponent, Thought Prison cropped up in many a deck of mine.

So imagine a Thought Prison imprinted on a Prototype Portal. If you could get a variety of cards imprinted on your various Prisons, you have a decent shot at punishing your opponent. This plan could certainly backfire (for example, if your opponent was playing a mono-color deck, then one Thought Prison might be enough.) Still, 4 damage per spell is better than 2, and this idea is pretty unique, so I'm running with it.

We'll need a way to keep my opponent's hand loaded with cards (for consistent Prison antics), and there are multiple artifacts that accomplish this. Howling Mine and Temple Bell are two suitable options, and either can be imprinted on a Prototype Portal. Overflowing my opponent's hand also creates a need to cast a lot of spells. With your Prisons on the battlefield, punishment will come either way. If by chance you get an Ebony Owl Netsuke imprinted on the Portal, well, that's just brutal. 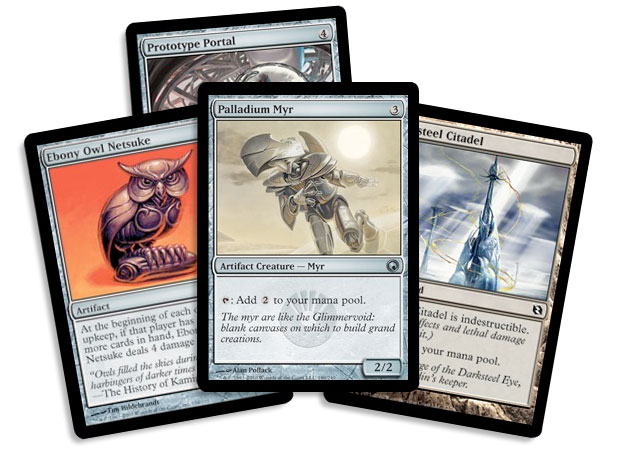 Palladium Myr is my latest favorite Myr. It's an excellent mana accelerator for these kinds of decks (and putting it into a Portal isn't too shabby either.) Another interesting way to accelerate mana in this kind of deck is to imprint an artifact land, like Darksteel Citadel. Tap such a Portal to put a Darksteel Citadel token onto the battlefield! This is awesome to me simply because I've never made a land token before. Making an extra land a turn can add up. Again, these are just tricks.

Brittle Effigy is extremely good as removal from an artifact source, so naturally imprinting that can keep problem creatures off of your back. Other controlling artifacts can hopefully stall the game until your Prisons lock down your opponent's spells. Choose to play through them and take 2 or more damage each time, or hold those spells and take 4 or more damage from Ebony Owl Netsuke(s)? This is a slightly experimental effort, but that's nothing new to the Lab.

The two white creatures are there to protect your artifacts from harm, as the deck really, really wants to land a Portal. Another kooky trick is to imprint another Portal, in this way ensuring that you'll never run out of Portals. Tumble Magnet should keep you out of trouble. Blood Clock, meanwhile, seems pretty funny/terrifying under a Portal.

One of my favorite cards of all time has imprint: Spellweaver Helix. There's no end to the broken things you can do with the Helix. Just type the Mirrodin artifact into the search at the top of the website and look for the craziness. I've used it in the past, with some personal favorite combos, including Suppress + Rekindled Flame (and Vedalken Orrery, although Leyline of Anticipation could fill in nowadays) and Savor the Moment + Summon the School (and Mist of Stagnation). 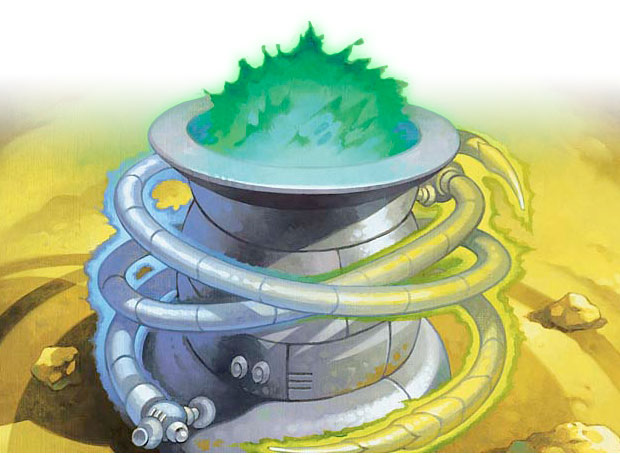 Whenever I examine an older flexible card like the Helix, I check out the latest sets to see if there are any new possibilities. Sure enough, there are plenty of recent sorceries to abuse with the Helix. Fossil Find seems pretty abusable with it, providing you successfully imprint it and find a second and third copy. With an otherwise empty graveyard, you can bounce the two Fossil Finds off of each other for only

, while getting whatever other sorcery you have on the Helix for free each time. Staying in the same block, retrace only gets more busted with the Helix in the mix. Imagine a powerful sorcery such as an Ultimatum imprinted alongside a Flame Jab. For every time you retrace a second copy of the Jab, you get a Cruel Ultimatum. That seems ... amazing. 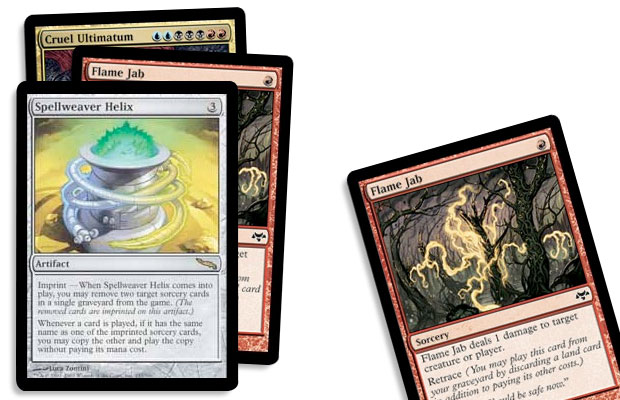 Another recent mechanic exclusive to only instants and sorceries, rebound, seems decent with the Helix. I've had trouble breaking rebound in the past, but at least a Nomad's Assembly is cast twice, giving you a free swing at your other imprinted sorcery. Let's say that other sorcery was something like Spectral Procession. Whoa, that's a lot of tokens.

Finally, Scars of Mirrodin itself has a lot of new fodder for the Helix to break in. Let's start with Flesh Allergy. Now, I've kept my eye on this card since I first read it. It's one of those cards that usually doesn't scratch the surface of its potential. Sure, it'll cause 2 life loss, tops. I wanted to bend Flesh Allergy until it caused a lot more than that.

My other sorcery therefore had to be one that could give my opponent a ton of creatures. Then I somehow had to destroy all of those creatures before the Allergy resolved. It's not pretty, but at least I found something that fit this criteria: the little known Mirage card Waiting in the Weeds. Wait, how do I make sure my opponent has a ton of Forests? Urborg, Tomb of Yawgmoth, of course. Wait, that card says "Swamp," not "Forest!" Not after a Mind Bend, it doesn't. And how am I killing them all before the Allergy resolves? Night of Souls' Betrayal.

The following setup is silly, but right up my alley. Have a Helix with Waiting in the Weeds and Flesh Allergy imprinted. You have an Urborg, Tomb of Yawgmoth on the battlefield, currently making all lands Swamps, and a Night of Souls' Betrayal as well. Wait until your opponent casts a creature (with toughness greater than 1, obviously), then cast a Flesh Allergy (sacrificing anything). The Helix will trigger and a copy of Waiting in the Weeds will go on the stack. In response to that, cast Mind Bend and Forest-ify all the lands on the battlefield. Now let Weeds resolve, giving everyone a ton of Cat tokens. Since the Night is a state-based effect, by the time the Allergy resolves, all the Cat tokens will have died. The Allergy resolves, killing the original target, and then your opponent basically loses life equal to the amount of untapped lands on the battlefield plus two (your sacrificed dude and the original target).

That deck turned out a little crazy, huh?

Another fun sorcery from Scars of Mirrodin that's repeatable (kinda) is the interesting Cerebral Eruption. If you have it imprinted on the Helix, you could either deal sweeping damage to your opponent's board, or reveal a land and basically buyback the Eruption for zero. So if the other sorcery was, say, Primal Command, every time you cast Cerebral Eruption, you could choose the Fallow Earth ability and make sure the Eruption goes back to your hand. It's a weird engine:

to either gain 7 life, tutor up a creature, or shuffle my graveyard into my library.

I'll choose the first two. Since I'm going to be casting the Eruption a lot in general, I want ways to manipulate the top of my opponent's library. Since I'm not stooping to Tahngarth's Glare after that last deck, I'll go with the various clash spells, just for fun. Recross the Paths is an underrated land searcher, and Titan's Revenge is a Blaze effect, which is always welcome.

We also have Woodland Guidance, which is pretty nuts on a Helix. Whatever your other imprinted card is, the Guidance can bring copies of it back and forth from the graveyard (with a potential bonus land untap as well.)

Finally, grok the stupidest combo of today. Check out the lowly Psychic Miasma.

Yeah, that's a sorcery with a potential buyback of zero. If only my opponent's hand were filled with lands!

... Wow. Whenever you cast the Miasma, an imprinted Head Games will let you stuff lands (and lands only) into your opponent's hand. Then you can Miasma as much as you want, which Abyssal Nocturnus likes to see. Fertile Imagination + Head Games is a great pair as well, giving you a way to guess right on the Imagination and get a bunch of Saprolings.