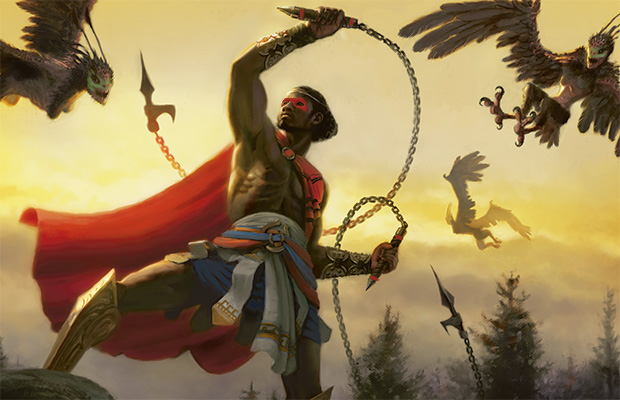 What? Heroic Week? Really? So, not about superheroes then? Darn.

Ahem. Welcome to Heroic Week here on DailyMTG! Today we'll be looking at some of the heroes of Theros, who can't fly and don't have any superpowers whatsoever. I know, right? Those Greeks weren't nearly as creative as we give them credit for. I mean, what kind of culture can't even come up with heat vision? Regardless, I've put together two decks built around some of the plane's greatest heroes. They may not be super, but with the right kind of help, these guys can be pretty great, too.

What Doesn't Kill You

The first thing that came to mind when looking for ways to amp up heroic was retrace. This mechanic allows you to cast a spell repeatedly from your graveyard by discarding a land, in addition to its other costs. There aren't many ways to cast an instant or sorcery over and over again, but retrace will do it as long as you can keep your hand stocked with lands.

The cheapest spell with retrace is Flame Jab. Not exactly an ideal spell with which to be targeting your own creatures, but most heroic abilities add +1/+1 counters, which effectively counteracts the damage.

Discarding a land and paying one mana for just a +1/+1 counter isn't exactly the most efficient use of your time. Therefore, I selected some heroic creatures that give you a bit more bang for your buck.

Centaur Battlemaster gets a whopping three counters each time you target it. Even with only three red mana the turn after you cast it, you can be attacking for 12 damage. That should be plenty big enough to kill any creatures your opponent has, and eventually your opponent as well.

Of course, we still need to address the issue of discarding all these lands. You'll need one each time you want to retrace Flame Jab for another heroic trigger. Fortunately, we have Land Tax. As long as you keep your land count lower than your opponent's, Land Tax allows you to search up three basic lands each turn, giving you enough ammo to cast Flame Jab over and over again. It can also make sure you have the colors of mana you need.

Since this deck relies on having two specific cards, I've included a few tutors. Enlightened Tutor and Idyllic Tutor can find Land Tax. I've also thrown in a few one-ofs to be searched up if you already have Land Tax.

Oblivion Ring is a versatile removal spell to get rid of anything your opponent might use to stop you. Lure can be put on the creatures you've pumped up with Flame Jab to enable it to kill any and all untapped creatures your opponent controls. And if your opponent tries to race you while chump-blocking with small creatures, Unflinching Courage will deal with both halves of the problem, allowing you to gain huge amounts of life while also trampling over blockers for huge amounts of damage.

To find Flame Jab, I've added in Gamble. Although it can really be used to find anything, Gamble is especially good at getting Flame Jab, since it doesn't really matter if you end up discarding it. As another one-of, I included Life From the Loam, which can get back lands you've already discarded to retrace for a second go. Like Flame Jab, discarding Life From the Loam isn't a big deal, so you can search for it even if you have no other cards in hand.

Another mechanic that allows you to cast the same spell over and over is buyback. Although it usually comes with a fairly prohibitive cost, buyback would allow you to cast a spell on your heroic creature as many times as you can afford. Even the least-costly buyback spells require a total of three mana, however, limiting you to perhaps two heroic triggers per turn. Luckily for us, there's a card that will change all that.

, making it much easier to cast a spell several times in one turn. In fact, some buyback spells cost exactly

to get back, making the additional cost essentially free.

The first buyback spell I chose to include is Whim of Volrath. With Memory Crystal on the battlefield, it only costs a single blue mana to cast each time. It also targets a permanent, allowing you to trigger heroic. The spell's actual ability generally isn't going to accomplish anything, but that's not really the part that matters here.

We still need a creature to target, of course, and in the end I chose Akroan Crusader. The ability to play as many Fugitive Wizards as you want is better than it might seem, and as you'll see later, those little tokens can pack a big punch.

Once I had the core of the deck worked out, Young Pyromancer was a shoo-in. It functions exactly like Akroan Crusader does, except it doesn't require you to actually target it with the spell. Therefore, with one Crusader and one Pyromancer on the battlefield, you'll be getting two tokens each time you cast Whim of Volrath.

Young Pyromancer brought to mind an assortment of other creatures that trigger upon you casting an instant or sorcery. I chose to include Guttersnipe, since it doesn't have to attack to dish out a beating, and Kiln Fiend, since it's the most cost-efficient of the various forms of Wee Dragonauts.

I decided to include Seething Anger as a backup to Whim of Volrath. It costs two mana each time rather than one, unless you cast a second Memory Crystal, but it also has a fairly powerful effect, pumping up a creature each time you cast it.

This leads me to the final buyback spell in the deck: Haze of Rage. Although it doesn't target, it can still trigger everything but Akroan Crusader, and it's ability it truly game-winning. Haze of Rage gives all your creatures +1/+0 until end of turn. A pretty small effect normally, but it also has storm. When combined with Whim of Volrath, you can easily give your army an extra 4 power, which should be more than enough to allow you to attack for the win. Even alone, casting it twice will give your creatures +3/+0, although it won't trigger Guttersnipe and Kiln Fiend as many times.

The last pieces I've chosen to include are Fabricate, which helps you find Memory Crystal each game, and Lightning Bolt, which serves as a solid removal spell that can also hit your opponent in the face if necessary. With Guttersnipe and Kiln Fiend around, a Lightning Bolt to the face can easily deal 5 damage or more.


Who's the Bad Guy Here?

Everyone is the hero of his or her own story, but for one of these brave souls, that story is about to end. Only one competitor can emerge from the arena alive, and there's no such thing as mercy in the pit. To put it another way, one will die a hero, while the other will become the villain.

Trial by Fire paid 3 life to get an untapped Sacred Foundry with Scalding Tarn, then cast Fabled Hero and passed the turn. Crystal Crusader cast Memory Crystal, then Whim of Volrath with buyback to make a token. Trial by Fire played a land and cast Flame Jab on Fabled Hero, retracing it three times. The now 6/6 Fabled Hero attacked, and was blocked by an Elemental token.

Crystal Crusader cast Guttersnipe, then paid 2 life to play Steam Vents untapped. Whim of Volrath was cast twice, dealing 4 damage and making two Elemental tokens. Young Pyromancer and an Elemental got in for 3 before the end of the turn. Trial By Fire played a land and cast Staunch-Hearted Warrior and Land Tax, but there were more than enough Guttersnipe triggers next turn to finish the job.

Trial by Fire played a land, exiled Memory Crystal with Oblivion Ring, and ended the turn. Crystal Crusader attacked for 2 before playing a land, casting a second Guttersnipe, and passing the turn. Trial by Fire grabbed three basics with Land Tax, played one, and cast Centaur Battlemaster before ending the turn. Crystal Crusader killed the Centaur with Lightning Bolt during the end step, dealing 4 damage with the Guttersnipes as well.

Back to the Command Zone

My work here is done, but Heroic Week is just getting started, so make sure to check out the other articles throughout the week for a number of different takes on the mechanic. As for me, I'll be back next week with Part 2 of my Commander article, taking a look at a more casual-oriented Johnny deck. Until then, may you find your own way to be a hero. See ya!