t's been a good week for feedback here at the Lab, and I've received quite a few interesting deck ideas. Although I don't reply to every email, I do read them all, and I'm always eager to hear your thoughts on new cards, old decks, or the column itself. Today, I'll be highlighting two emails I received from readers, and using them to construct decks around underappreciated cards.

The first email comes from Mark of Austin, Texas. He issued a challenge to build a deck using a card he had never seen anyone use: Immortal Coil.

Reminiscent of Nefarious Lich from Odyssey, Immortal Coil uses your graveyard as your life total. On one hand, this can be a great thing if your graveyard is full of cards, allowing you to essentially gain a large amount of life. On the other hand, if your opponent can exile your graveyard, you lose the game instantly.

This sparked an idea. What if "you" isn't you? If you use Donate to give the Coil to your opponent, you can then exile his or her graveyard with Tormod's Crypt. Suddenly, this dangerous drawback becomes a lethal weapon.

Bazaar Trader can also be used to give away the Coil, without requiring you to use mana to do it. As a backup to Tormod's Crypt, Nihil Spellbomb does the same thing for one more mana. You can also draw a card when you sacrifice it, making it useful even when you draw more than one copy.

Fabricate helps tutor up Immortal Coil, ensuring that your Bazaar Trader isn't left with nothing to trade. Fact or Fiction also helps find the combo pieces, while putting cards in your graveyard to make sure you don't die to the Coil as soon as you cast it.

Although Bazaar Trader allows you to give away the Coil immediately, Donate costs three mana, meaning you'll usually be stuck with the Coil for a turn. Since this deck isn't devoted to putting cards in the graveyard, this can be a dangerous moment. To forestall your demise, I've included Darkness, a one-mana spell that stops creatures from killing you for a turn.

Finally, Mana Leak and Counterspell buy you time while you get things set up. You don't want your opponent killing you before you finish wrapping your present.


Luck of the Draw

The second email was sent to me by Jan from Holland. I'll let him tell the story.

My inspiration comes from frustration. When I started playing Magic a good friend gave me some goblins and I had fun destroying and sacrificing my own cards. But I never had the fun of winning and more important (since I didn't own enough cards), I never had the fun of deck building. I decided to start buying my own cards, but being a student I was a bit... poor. I went to the shop and bought a booster of Champions of Kamigawa. I opened it, hoping for an aggressive big bomb and my rare was... Uba Mask.

The next week I bought four more packs for revenge... but apparently I disfavored Phenax. Two rares I cannot remember, but the two Uba Mask staring at me, left an impression that woke me up in the middle of the night for a few weeks. 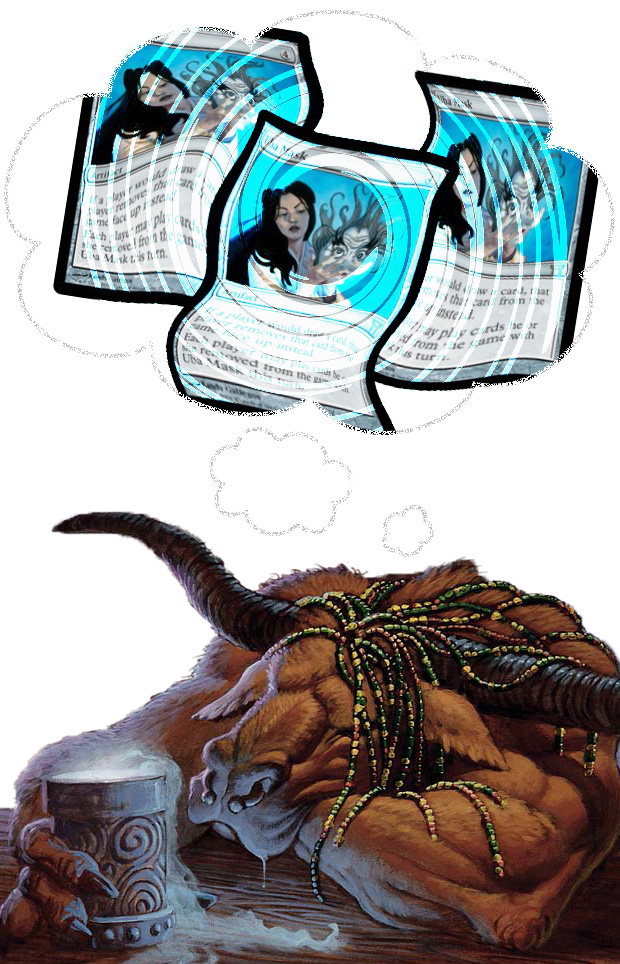 I decided that the only way to win this battle was to be happy with what I got. I started building my Uba Mask deck. I am proud of my firstborn. I never saw the combo with looters mentioned anywhere else. I managed to meddle the frustration toward my opponent. Many games have ended with an opponent without permanents or library.

Here's the decklist he submitted:


The idea is to use creatures to make your opponent draw and discard cards on your turn. Uba Mask will exile the drawn cards, and since they can only be played this turn, cards other than instants are rendered useless. In addition, your opponent will still be forced to discard cards, emptying his or her hand in short order.

Creatures like Temporal Adept return permanents to your opponent's hand. Pemmin's Aura and Freed from the Real allow you to activate your looters multiple times to keep your opponent's hand empty. You can win the game by exiling your opponent's entire library, or by attacking with creatures after all blockers have been cleared away.

I liked this idea, but there were a few changes I wanted to make to the list. The first card I added was Magus of the Bazaar. It can't target your opponent, but once you've emptied your hand it taps to draw two cards with no downside.

I also included Venser, Shaper Savant. Like an Æther Adept cranked up to 11, he can return spells as well as any permanent. He only costs one more mana, and you still get a 2/2 out of the deal.

Fabricate helps make sure you can get your hands on an Uba Mask, although the assorted card-drawing creatures also make that easier. Finally, I splashed in a bit of black in order to replace Boomerang with Recoil. For one more mana, Recoil negates the need to use a looter on your opponent to get rid of the card, doing both halves of the deed on its own and leaving you free to draw cards yourself.

4 Lore Broker 4 Magus of the Bazaar


War of the Underdogs

Both of these decks are built around cards most players wouldn't touch in a million years, but only one can be crowned champion. Let's take this fight to the arena.

Über Mask won the roll, and both sides started off with lands. Über Mask cast Lore Broker on turn two, and Bazaar Trader came down on the opposing side. Über Mask played Mikokoro, Center of the Sea, and Bizarre Traitor simply played a land and passed the turn.

Uba Mask hit the board, and Lore Broker made each player discard a card. It was too late to stop Bizarre Traitor's combo, however, as Immortal Coil and two copies of Tormod's Crypt sealed the deal.

Bazaar Trader hit the battlefield on turn two to get things started, and Über Mask responded with a Lore Broker. Bizarre Traitor cast Fabricate, getting Immortal Coil. Über Mask played a land and passed the turn.

Time to Pay Up

As Uba Mask skulks off to its corner in defeat, the time has come to wrap up today's article. Fear not, however, as I'll be back next week to pay tribute to a certain mechanic in Born of the Gods. But which one? Let's see, Inspired Week was last week. Heroic was covered in October. Maybe scry? No, Scry Week was back in 2007. What could it be? Well, I guess we'll just have to wait and find out. See ya!