The King of Conspiracy

elcome to From the Lab, folks! It's Conspiracy Week here on DailyMTG, but rather than previewing a new card, I'll be talking about one that's already been revealed. This card excites me more than any other in the set, and I couldn't wait to start building decks around it. It's definitely designed with Johnnies in mind, and there's no end to the craziness you can create with it. 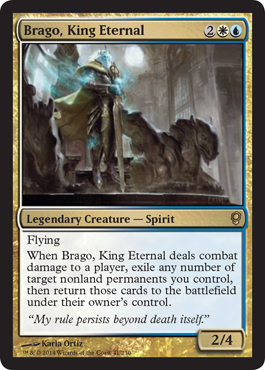 Brago, King Eternal is like a Galepowder Mage cranked up to 11. Although you have to hit your opponent to get the effect, once you do, you can flicker any number of nonland permanents, returning them to the battlefield immediately. This could allow you to abuse any number of enters-the-battlefield abilities, but I have something even more devious in mind.

The King of Combat

The first card that came to mind when looking at Brago was Aurelia, the Warleader. With these two on the battlefield, you can get an infinite number of combat phases. Simply attack with both creatures, and Aurelia will give you an extra combat phase. Then, when Brago hits your opponent, he can flicker Aurelia. Since this Aurelia is considered a new object, when you attack again her ability will trigger once more. So long as you keep hitting your opponent, you can keep attacking until he or she is dead.

Although Aurelia, the Warleader is the easiest way to get infinite combat phases, it's not the only one. Godo, Bandit Warlord also creates an extra combat phase when he attacks for the first time each turn. There is a problem, however.

You see, Godo doesn't have haste, so you won't be able to attack again after you flicker him, meaning he can't give us our infinite combat phases the same way Aurelia can. But he can give us the means to do so.

When he enters the battlefield, Godo searches your library for an Equipment and puts it onto the battlefield. If you search for Swiftfoot Boots, you can set up a hasty Brago for later. Additionally, Godo can also search up Sword of Feast and Famine to untap all your lands. With Aggravated Assault, you can pay five mana for an extra combat phase as many times as you want. So long as Sword of Feast and Famine keeps untapping your lands, you can keep doing it forever.

Path to Exile can dispose of a pesky blocker or any creature that threatens to mess with your plans. It can also buy you time to set things up in the face of attackers. Order // Chaos can remove attackers as well, but its primary purpose is making sure Brago will get through on the turn you combo off, preventing all of your opponent's creatures from blocking for the turn. I've also included some mana-producing artifacts to let you cast the expensive spells in the deck a turn or two ahead of time.

4 Aurelia, the Warleader 1 Sword of Feast and Famine
60 Cards


The King of Artifacts

This next combo has a lot of pieces, but the key card that started it was Strionic Resonator. If you can keep making copies of Brago's ability while it's on the stack, you can keep flickering permanents forever. By using artifacts, you can take advantage of any abilities that require the artifacts to tap. Brago will return them all to the battlefield untapped, and artifacts don't have any summoning sickness to worry about.

So, Brago will untap Strionic Resonator each time by flickering it. The next step is to get two mana each time. Fortunately that's easy, as any artifact that produces multiple mana will do the job. I chose Thran Dynamo so you get infinite mana out of the deal as well.

Now you can flicker everything forever, but you still need a way to win the game. I've included two options. You can use your infinite mana to kill your opponent with Goblin Cannon, activating it a few thousand times before the first ability resolves and makes you sacrifice it. You can also use Brago's ability to untap artifacts by flickering them to mill out your opponent with Millstone.

Since the combo uses so many pieces, I decided that rather than include four copies of each piece and hope to draw the right combination, I'd include just two copies, in case the first gets destroyed, and leave it to an assortment of tutors to find them. Fabricate and Enlightened Tutor can both do the job, and Tezzeret the Seeker can put artifacts directly onto the battlefield. Since you'll need to find Brago as well, I added in Impulse and Fact or Fiction to help dig through the deck.

This combo will often take some time to set up, so you'll need a way to protect yourself. Counterspell and Render Silent allows you to stop a spell or two you don't like, and Detention Sphere can help if you miss something important.

With so many ways to grab artifacts in the deck, I included a couple cards that can be searched up if you need them. Whispersilk Cloak can be used to protects Brago, King Eternal from removal spells and blockers alike, ensuring you can trigger his ability. Finally, Brittle Effigy can be tutored up if there's a creature on the battlefield that simply must go.


The King of the Hill

Two kings, one throne. Only one Brago can take his place as the true king, and there's only one way to decide who gets the job: A good old-fashioned fight to the death. Fortunately, these kings aren't too high and mighty to get their hands dirty. Let's take this down to the arena and watch the battle unfold.

Eternal Combat cast a second copy of Brago, and The Flicker Machine used Fabricate to get Strionic Resonator. Eternal Combat attacked for 2 with Brago and cast Aggravated Assault before passing the turn.

The Flicker Machine cast Whispersilk Cloak and ended the turn. Eternal Combat grabbed a Mountain with Scalding Tarn and attacked with Brago. Aggravated Assault created a second combat phase for another 2 damage.

Aurelia, the Warleader attacked for 3, and Brago blocked. Aurelia attacked again during the second combat phase, and with 3 damage already Brago was forced to step aside. Aggravated Assault created one more combat phase, and Aurelia got in for another 3 damage.

The Flicker Machine cast Goblin Cannon and attacked with Brago. Whispersilk Cloak prevented Aurelia from blocking, and the combo went off, with Thran Dynamo producing a few million mana to power Goblin Cannon.

The Flicker Machine Cast Tezzeret the Seeker and used him to put Strionic Resonator on the battlefield. Millstone was cast from hand, and with just enough mana left to activated the Resonator the first time, the combo was completed. Eternal Combat lost the game during the next draw step.

The King of Themed Subheadings

The conspiracy is over for now, but you can look forward to getting your hands on the set, soon. It looks to be a ton of fun to draft with friends, and I'm looking forward to getting a group together on release day. Make sure to join me next week for more crazy combos, and, until then, may all your decks be fit for a king.