The Lens of Creativity 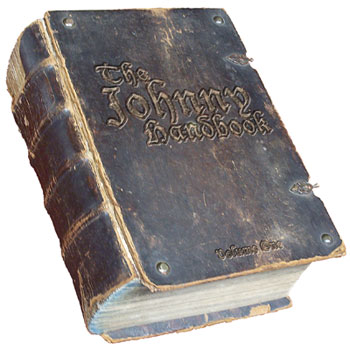 ello all, and welcome to a very special theme week. I don't think I have to properly explain it, but just to keep everything straightforward for the moment: It's Johnny Week! Fresh off of the couple of months since Timmy Week aired here on the site, everyone's favorite combo player gets his moment of glory this week.

I realize that in particular, my article this week might be highly anticipated. This isn't due to any bloated ego, but to the fact that this column, From the Lab, is the Johnny column. Naturally, I'll be examining just why this is so and why indeed I choose to reside in these particular waters of the ocean of Magic player psychographics.

In fact, I'm truly astounded to be in this position, as a Johnny writing about general Johnny-tude. I don't think I can honestly say I understand everything about Johnny, but I believe I have the gist. Therefore, my article today will explain what being a Johnny means to me, and, if my audience is anything like I was back when I read From the Lab (then called House of Cards) for years, this might hold true for you as well. Of course, some kooky decks might pop up here and there, so this doesn't come off as lecture-y or anything.

So what do I feel represents Johnny in one word? Creativity. To me, being a Johnny means having the appropriate thought process that enables multiple ways of looking at things. Plan A may be mapped out well and good, but what are possible Plan Bs, or Cs, or Ds? I'm not saying that the other player profiles are lacking in this trait, but as I see it, Timmies may approach a card and will admirably use it in a straightforward way, whereas a Johnny may dream up another way of using the same card.

An example card I will give is Door to Destinies. This Morningtide rare screams one thing only (at first): "TRIBAL TRIBAL TRIBAL!" Hidden, however, is the use of charge counters on the artifact. If you looked at Door of Destinies and instantly thought of things like Energy Chamber or Power Conduit to use alongside it, you have the same spark of Johnny creativity that I possess. This doesn't mean Door to Destinies is necessarily a Johnny card, but it definitely has more flexibility in terms of deckbuilding than Coat of Arms, for example. 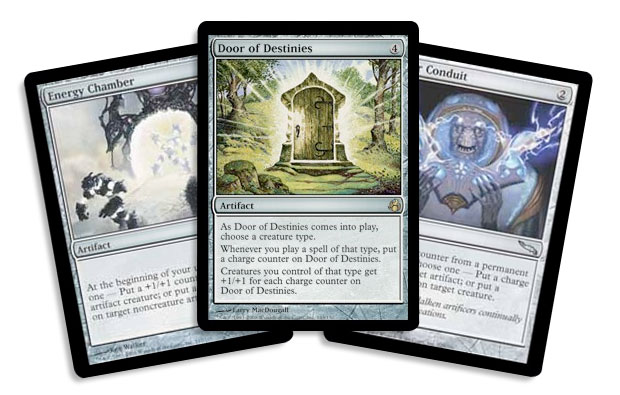 Creativity means a lot to me when I'm playing Magic, and I genuinely respect those I meet on the battlefield that share the spark of infinite possibility. And when I say infinite, I mean it. Magic is a game in which nearly any aspect can be customized.

One common barb that I've seen used against Johnnies is the taunt against the four-or-greater-card combo. "Why assemble a machine made of five or six different parts when winning is easier with less?" is a typical question I'll receive. I've heard similar questions directed towards cards like Mind Bend or Artificial Evolution, with some claiming that these cards are "all but useless." 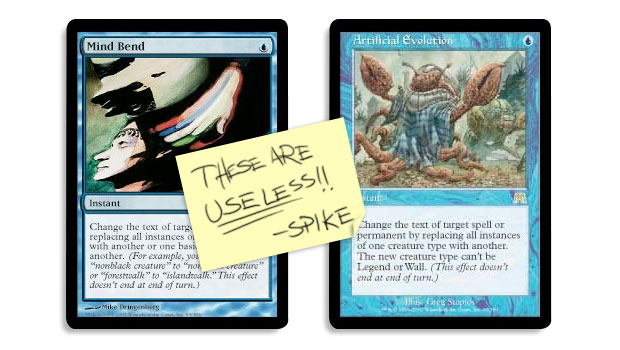 My answer is to direct these questioners again to the notion of nigh-infinity that Magic represents. Is it possible to have Ib Halfheart, Goblin Tactician sacrifice two Plains to create two 1/1 black Lizard tokens? Yes. And until you have tried doing so, how can you judge the level of efficiency that doing so holds, or the vastly more important level of fun? You can't know until you try. 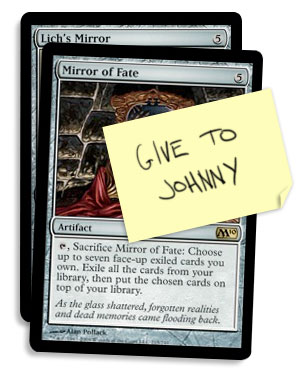 This leads me to another key concept that I believe to be associated with Johnny: Curiosity. It is this characteristic that prompts a Johnny to ask, "What could that card be used for?" usually referring to a forgotten rare or uncommon, or a very out-of-place card of any sort.

I take great pleasure in finding a use for a card off the beaten path, and apparently, so do many of you. Or, at least, the 238 submitters for the Birthday Contest do. That contest was wholly dependant on using these forgotten random cards together in fun and new ways.

If you are curious about using that mysteriously quirky rare (two recent Mirrors, Lich's Mirror and Mirror of Fate, come to mind) and are willing to explore all scenarios of using them in a creative fashion, I submit to you that you have a definite Johnny streak.

I can't bear to lecture anymore, because after all, this is Johnny Week, and I couldn't bear it if some cool combos and ideas weren't even discussed today! Fortunately, ever since Timmy Week way back when, I've been saving some exceptionally cool ideas for today's column.

The first comes from Robby Bullis, a.k.a. Redland Jack, a known master of Johnnyness due to his contributions to this column over the years. He sent me this idea back in February, and I've been bursting to reveal it for five months now, as it's an idea that screams Johnny Week in my opinion.

Robby found a great interaction with Skill Borrower and Mesmeric Orb. If you had a way to repeatedly untap something, you could control what the Borrower becomes. Fellow Wizard Aphetto Alchemist steps in ... but how to keep from milling yourself? Gaea's Blessing, of course! Here's Robby's deck, with his explanation below it.

Eye in the Sky

4 Skill Borrower 2 Survivor of the Unseen

The trick here is to get an Alchemist, an Orb, and a Borrower into play. This lets you see the top card of your library and mill through (with the Alchemist) your deck to get the 'right' card on top. The combo is, essentially: 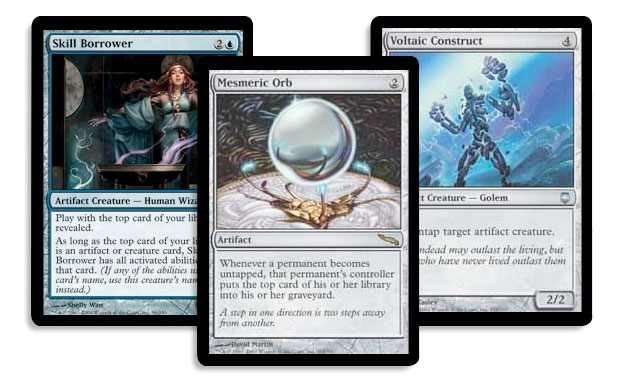 If you're lost, Gaea's Blessing shuffles your graveyard into your library when it is milled, so you have the ability to "flip to" any card and have it on top, with enough Mesmeric milling.

Robby found a fast way to perform this online without as many clicks, and this route also explains the Fatestitchers as more than expensive Alchemists.

Robby also notes the cool combo of Information Dealer and Skill Borrower, especially when Kamahl on top, as in his words, "You can keep dancing him to the top and pinging for 3." With so many Wizards, I might swap the Pit Fighter for Prodigal Sorcerer in a possible build, keeping things blue and Vedalken Aethermage-fetchable. 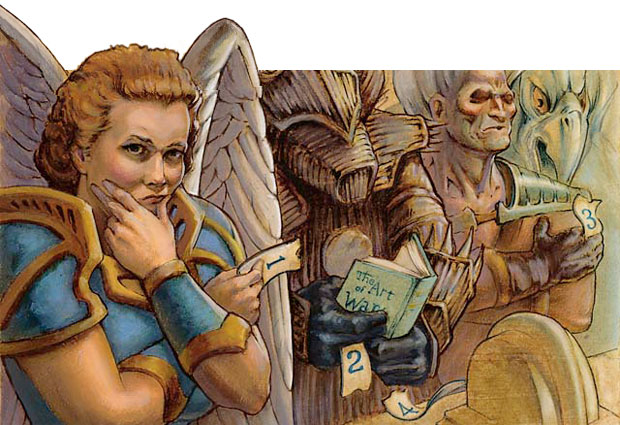 Well, that's one deck down. Time to uncork one of my most recent silver-bordered concoctions. As we all know, Unhinged cards are broken in half, but some are just quirky for unique reasons. First Come, First Served is one of these cards, being the only card to ever care about collector numbers—you know, those small-printed numbers on the bottoms of modern cards.

Fortunately, and most Johnnily, a perfect creature now exists to pair with the Unhinged enchantment. It's one that desperately desires first strike, and one with a conveniently low collector number. 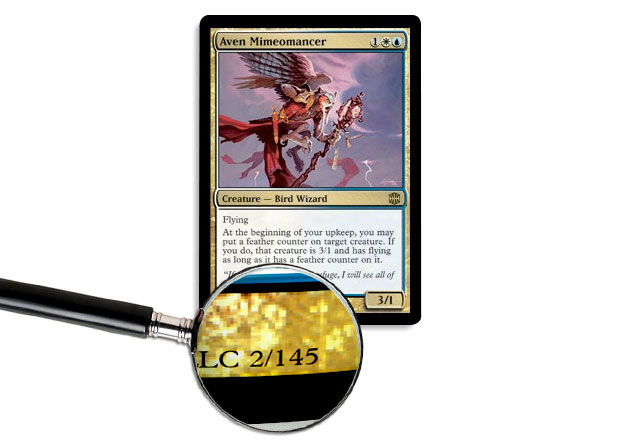 Think about it. By giving Aven Mimeomancer first strike in any combat situation, you can enable it to take out any creature with 3 toughness or less. Good thing, then, that the Mimeomancer can forcibly transform opposing creatures into 3/1s. Trade with any threat, and First Come, First Served will ensure the trade pays off for you.

Of course, we must load the rest of the deck with creatures that have low collector numbers. Akrasan Squire and Aven Squire are cheap low costers that double as Soldiers. Ballyrush Banneret and Avian Changeling help out any sort of Soldier shenanigans, and Captain of the Watch blows the door open as a bombshell Magic 2010 rare to have fun with, wacky Unhinged-Alara Reborn combos or not. 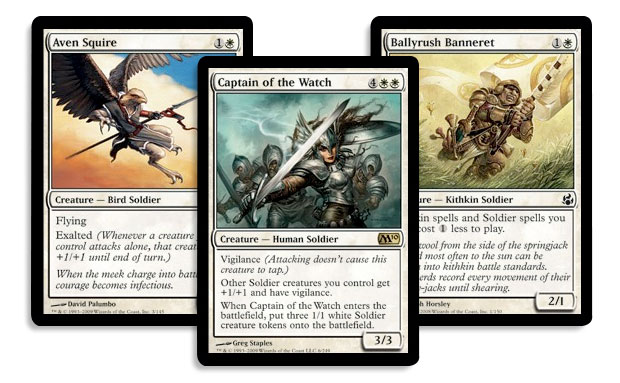 Burrenton Bombardier is another Soldier, as is Aven Riftwatcher, and Benalish Commander is acceptable as another Soldier lord. All of these creatures happen to have low collector numbers. Bushi Tenderfoot is the wrong creature type, but it's hilarious to have him first strike past a feathered foe and flip into Bushi Tenderfoot.

3 Captain of the Watch
40 Cards


This, I hope, conveys a Johnny's thought process as he or she tackles a curious card, finds a pretty sweet combo with it, and successfully attempts to build around it.

Notice I said successfully attempts. For me, and perhaps for other Johnnies, deck building is more than half the fun. Don't get me wrong, I love playing, but the thrill of successfully building around a forgotten card is just that: a genuine thrill.

I hope I've instilled at least a glimmer of why I'm a Johnny, and why being so is truly a great thing! See you next week when I can finally dive into Magic 2010! 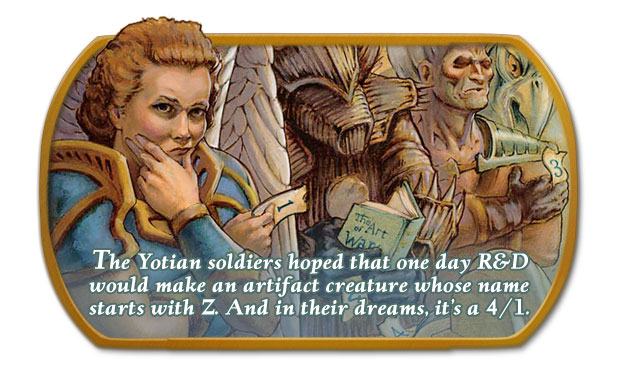