A Little Something Extra 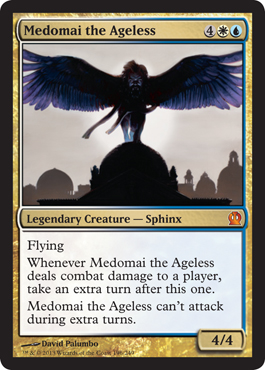 Medomai the Ageless gives you an extra turn every time he hits your opponent. Now, this ability alone would allow you to take an unlimited number of turns, as Medomai attacks again and again during each sequential combat. Therefore, he comes preinstalled with a safety valve to prevent that from happening. His other ability prevents him from attacking during extra turns, making it so you can only get one extra turn under normal circumstances. As you'll see, however, there are plenty of ways to get around that.

The first idea that came to mind was taking advantage of double strike and extra combat phases to stack up several extra turns at once. There's even a card from Darksteel that's perfect for this job: Savage Beating. When you pay the entwine cost, Savage Beating gives all your creatures double strike, and gives you an additional combat phase in which you can attack again. If Medomai gets through both times, you'll be getting four extra turns. As an added bonus, your opponent will be at 4 life.

Unfortunately, the fact the Medomai can't attack during extra turns also means you'll need another creature with which to finish off your opponent. Plasma Elemental seems like a perfect fit. It can't be blocked, and your extra turns give you plenty of time to cast it and attack with it.

I wanted an additional win condition in the deck, so I added in Falkenrath Marauders. When combined with Savage Beating, it can deal exactly 20 damage in a single turn. It works quite well with all the cards that help Medomai, giving you extra damage instead of extra turns.

Seize the Day is another great card for this deck. Although the initial cost is the same as Relentless Assault, which untaps all your creatures, Seize the Day can be cast again from the graveyard for only three mana. If you cast it both times on one turn, you can stack up three extra turns with the Sphinx, only one fewer than with Savage Beating.

I wanted one more card that gives double strike, so I added in Boros Charm. Not only can Boros Charm give you an extra turn, it can save Medomai from removal by giving your permanents indestructible until end of turn. As if that wasn't enough, if you do manage to use Savage Beating to get four extra turns with the Sphinx, you can draw a Boros Charm at any time during those turns to immediately finish off your opponent.

Since so many pieces in this deck require six or seven mana, I added a healthy mana-ramp suite to accelerate you to that level. The Boros, Izzet, and Azorius Signets can be cast on turn two, giving you four mana on your third turn. You can also cast them later and activate them immediately for a net cost of only one mana.

Finally, I added a few copies of Path to Exile to help clear out any blockers that might get in the way of Medomai, making it easier to ensure that powerful ability triggers when you need it to.

Medomai's drawback says he can't attack during extra turns. It doesn't say he can't deal damage, or that his ability can't trigger, just that he can't attack. This got my gears turning. If you can put Medomai onto the battlefield tapped and attacking each turn, you can take an unlimited number of consecutive turns. Although early on I experimented with Conspiracy and cards like Preeminent Captain and Kaalia of the Vast, I ended up settling on Yore-Tiller Nephilim. Although it requires four colors of mana, the Nephilim can get creatures of any type, and all you need to repeatedly put Medomai onto the battlefield is a sacrifice outlet.

Viscera Seer is an easy sacrifice outlet that can be cast for only one mana. It's also a creature, which means it can be searched up by the same cards that grab Medomai and Yore-Tiller Nephilim. Eladamri's Call can grab any creature from your deck and put it into your hand for just two mana, allowing you to get any piece of the combo you happen to be missing. Worldly Tutor costs you a draw step, but it also only costs one mana and can be used at instant speed, allowing you to wait until the end of your opponent's turn to determine what you want to search for.

I'll also include a few singletons to tutor for if the situation requires it. Sun Quan, Lord of Wu effectively makes all your creatures unblockable, which can be incredibly useful for making sure Yore-Tiller Nephilim and Medomai the Ageless can attack safely. Shriekmaw can kill most creatures for just two mana, but just in case you run into a black or artifact creature that's giving you trouble, I'll include one Fiend Hunter to take care of that as well.

Whispersilk Cloak is one of the best ways to protect a creature. It can save Yore-Tiller Nephilim from both blockers and removal spells, making it that much harder for your opponent to stop the combo.

Finally, a nice suite of mana-ramping spells helps you get to the six mana required to cast Medomai more quickly. Fertile Ground is an incredibly powerful and underrated ramp spell. Not only does it give you an extra mana for the rest of the game, much like its various land-fetching compatriots, it allows you to get any color of mana you need each turn, and can be used immediately if you put it onto an untapped land. It is one of the most powerful ways to accelerate your mana, especially in a five-color deck.

One way to accelerate your mana that isn't underrated is Birds of Paradise. The power level of this card has been made quite clear over the years, and it always manages to find its way into several decks whenever it's in Standard. Like Fertile Ground, it can produce any color of mana. However, it trades off the vulnerability of being a creature for the ability to be cast on turn one, accelerating your game plan that much sooner.

The last tool I'll include is Sphere of the Suns. It may not be as powerful as the other two ramp spells, but it does have a tremendous advantage in costing only colorless mana, allowing you to cast it no matter which lands you happen to have in hand.

3 Whispersilk Cloak 4 Sphere of the Suns 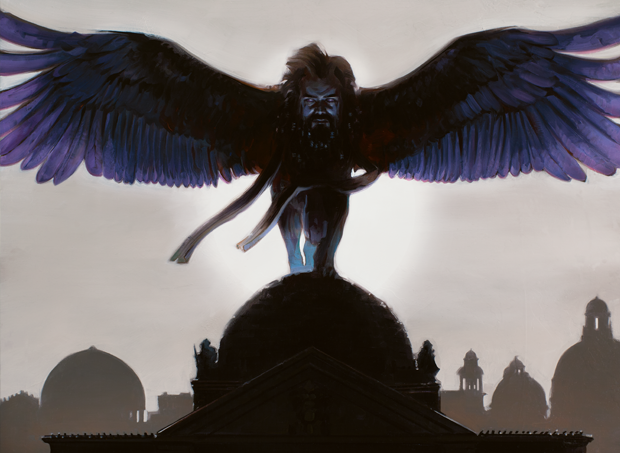 Last time I previewed a legendary creature, I had to tweak the legend rule a bit so the games could play out properly. Although I didn't know it at the time, this rules change soon became official, so today's Medomai mirror-match will be much easier to handle. These Sphinxes may not be at risk of dying of old age, but they're certainly at risk of dying here in the arena, and in this battle, there can only be one victor.

Ageless Beating attacked with Falkenrath Marauders, and Yore Doom chose not to block, taking 2 damage. Ageless Beating then cast Plasma Elemental and passed the turn. Yore Doom cast Eladamri's Call, searching up Viscera Seer and casting it. Ageless Beating cast Path to Exile on Medomai in response, getting rid of it permanently.

Yore Doom cast Fiend Hunter, targeting Falkenrath Marauders and sacrificing the Hunter to Viscera Seer with the ability still on the stack. The Marauders were exiled permanently, and Yore-Tiller Nephilim attacked, bringing back Fiend Hunter. The Hunter targeted Plasma Elemental and was sacrificed to Viscera Seer again. The Nephilim hit for 2 and passed the turn. Ageless Beating played a land, cast Izzet Signet, and ended the turn. Yore Doom played Blood Crypt and attacked with Viscera Seer and Yore-Tiller Nephilim. The Nephilim brought back Fiend Hunter for an extra point of damage, choosing not to exile anything.

Ageless Beating cast Falkenrath Marauders and attacked for 2. Seize the Day untapped the creature, and it swung in for another 4 damage before the turn's end. Yore Doom played a land and cast Medomai the Ageless, sacrificing it to Viscera Seer before putting it onto the battlefield with Yore-Tiller Nephilim. Ageless Beating quickly died to an endless onslaught of Nephilim and Sphinxes.

Both sides started off with lands, and Ageless Beating cast Azorius Signet on turn two. Yore Doom cast Worldly Tutor at end of turn to grab Birds of Paradise, then untapped and cast it, playing a Steam Vents before passing the turn. Ageless Beating cast Boros Signet, fetched up a Sacred Foundry, and ended the turn.

Yore Doom played a Hallowed Fountain and passed. Ageless Beating played a land and cast Medomai the Ageless before passing back. Yore Doom used Bloodstained Mire to search up a Godless Shrine and cast Viscera Seer. Birds of Paradise produced a second white for Fiend Hunter, and Viscera Seer sacrificed it with the ability on the stack to permanently exile Medomai the Ageless. Yore Doom passed the turn, and Ageless Beating cast Plasma Elemental before passing back.

Yore Doom played a Stomping Ground untapped, then cast Yore-Tiller Nephilim and Eladamri's Call, searching up Medomai the Ageless. Viscera Seer attacked for 1 and Yore Doom ended the turn. Unfortunately for the Nephilim, Plasma Elemental delivered a Savage Beating, getting in for 16 damage. With Yore Doom having taken 5 from fetches and untapped shocklands, the blast of plasma to the face proved to be too much to handle.

We Can Be Heroes, Just for One Day

The Theros Prerelease is quickly approaching, and I hope you have all marked the date on your calendars, because it's going to be a blast. The Hero cards and five different Prerelease promos promise to make the event one to remember, and it's a great kickoff to the Hero's Path. Until then, may you have all the time in the world. See ya!