elcome back to the Lab! Today it is my task to deliver some kooky ideas concerning lands that attack. I like this theme week not only because it means I can fully dive into Worldwake, but because it's flexible enough to apply to the attacking lands of sets past.

I also want to try to use lands in proactive ways other than attacking. Worldwake itself has shown us that you can not only animate lands (Crusher Zendikon) but make them indestructible (Terra Eternal), play them more quickly (Explore), get a lot of them in your hand (Treasure Hunt), and more. As long as lands are involved in the process, I'll be content. 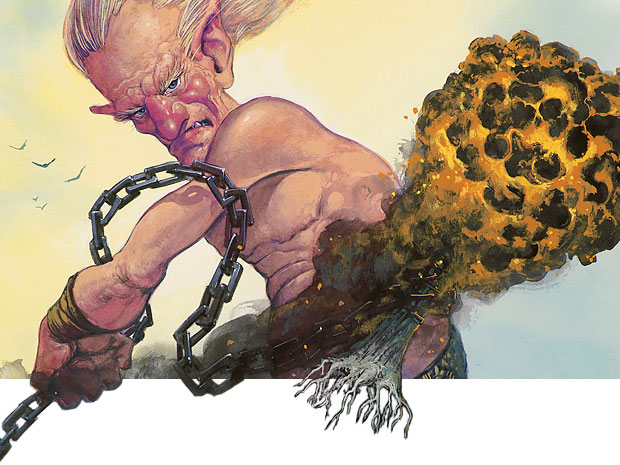 This leads me to my first deck, which began as another riff on Selective Memory, my second Worldwake preview card. The goals of this deck are to stick a Countryside Crusher on the table and follow it up with a Selective Memory. Choose to exile every nonland card in your library except for your two copies of Soul's Fire. The Crusher will have a mammoth upkeep, milling dozens of lands until it reaches one of the Soul's Fires. If you can't roast your opponent with one, the next one definitely should suffice. I think this deck applies for today because it uses lands as fuel for a large attacker—and besides, it has Mutavault in it!

The early goal is to find a Countryside Crusher as soon as possible. Drift of Phantasms can find one. There's also a mini-Giant subtheme in the deck, in case you can't get the combo running. Giant Harbinger can find the Crusher, Thundercloud Shaman can sweep the board of weenies, and Crush Underfoot acts as the creature-only version of Soul's Fire, which should come in handy if you just want to kill a blocker and swing with a big Crusher. Chrome Moxes speed up the deck, while Remands typically slow down your opponent. This deck is pretty fun if you like lots of lands and big Giants (which should apply to most people!) 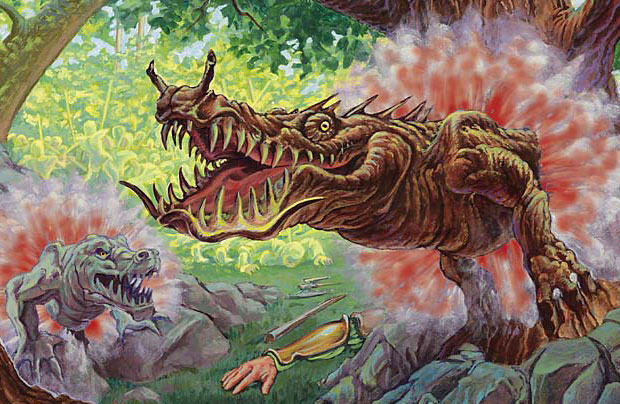 Okay, back to the old- and new-fashioned idea of animating your lands. In a couple of great emails, reader Aaron made me aware of a fascinating combination: Terra Eternal and Natural Emergence. As Aaron said, "the possibility of controlling an army of 2/2 first striking, indestructible beat machines is too enticing to pass up." The reason Aaron went with a tricky gating enchantment to pull this off instead of the easier Nature's Revolt was because Natural Emergence is the only one that has a "you control" clause. Sharing said 2/2 first striking indestructible beat machines is not exactly in the plan.

For an early green or red enchantment, Aaron used various cheap ones that help with the mana flow. Exploration and Burgeoning accomplish the same general thing, Trace of Abundance can accelerate into a turn-three Emergence, and Sterling Grove finds key enchantments and protects them as well. To this list I'm going to add Rites of Flourishing. It acts as both an Exploration and a Howling Mine, letting you draw into your pieces quicker.

Aaron also thought to use the new, appropriately colored dual creature-lands in his Naya-aligned concoction. Raging Ravine is just as beastly as it looks, and that level of beastliness only skyrockets with a Terra Eternal on the battlefield. Even if you run into a big blocker, you'll still survive with that extra +1/+1 counter. Eventually, your Ravine will be big enough to wipe anything out. And post–Natural Emergence, it's +1/+1 counters will make it an extra big beat machine.

Aaron also used Earth Surge, which in my mind earns big style points. Now all of your lands are extra big beat machines. Even without the Natural Emergence, a surprise Vivify on an untapped land can result in a 5/5 land creature ambushing your opponent's Rhox Brute. It gets even crazier with Kamahl, Fist of Krosa, who is perfect here as a singleton.

Another Worldwake card that seems useful here is Chain Reaction. Dubbed the "red Wrath of God" by, well, myself, Chain Reaction likes seeing a ton of creatures on the board. The Natural Emergence + Terra Eternal combo ups the total creature count, possibly letting a Chain Reaction fry everything on the board while leaving your indestructible army unhindered.

Here's a slightly modified version of Aaron's deck, which was very well put together.

I went with Wild Growth instead of Trace of Abundance. Accelerating into a turn-three Terra Eternal is important, and a turn-three Rites of Flourishing is fun for everyone. Mass Hysteria seems like a neat enchantment to help Natural Emergence get onto the battlefield, and it'll then give all your indestructible lands haste as well. Aaron's original list had Vinelasher Kudzu, which is definitely a noteworthy card for any land-heavy deck. 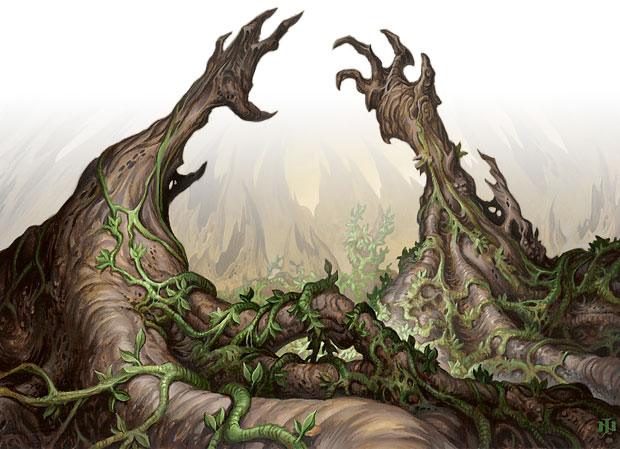 One of the most braintwisting cards of all time is, in my opinion, Life and Limb. It's clearly a Johnny's delight, offering interactions with Saprolings and Forests and all. Way back when, Chris Millar offered a reader-fueled article filled with fun and kooky ways to use the Planar Chaos enchantment. One of my favorite decks in that article is the one that proactively uses no Forests, to prevent the possibility of sweepers. Of course, that deck used Kavu Recluse to destroy lands like crazy (you heard me).

The thing about Life and Limb is that when you cause a Saproling to enter the battlefield, since it's also a Forest, it will trigger the landfall cards from Zendikar block. So for example, when you cast a Scatter the Seeds, it'll trigger Lotus Cobra, Grazing Gladehart, or Avenger of Zendikar—thrice. 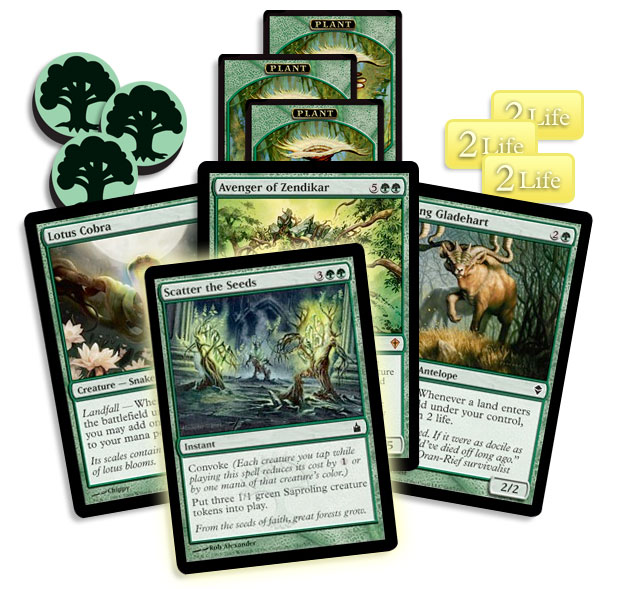 Speaking of Avenger of Zendikar, now there's a mythic rare land-related game-winner. This card caught my eye when it was previewed, and I'm glad to use it now. It gets even better alongside Life and Limb, since your Saprolings count as lands. I would use Artificial Evolution to change "Plant" to "Saproling," but I don't want my brain to explode.

Multiple triggers from a Turntimber Basilisk can often result in a Plague Wind, since a simple Scatter the Seeds can force three creatures to block the deathtouching creature. The many Funguses from Time Spiral block can put Saproling Forests onto the battlefield at instant speed, opening up a window for the new "landfall instants," like Groundswell, Searing Blaze, and Mysteries of the Deep.

I tried to make the deck more about Avenger of Zendikar than Life and Limb, since doing the latter is risky and can backfire unhappily. The Avenger, however, is just a fun green fatty to build around. For instance, it's the first Plant lord. Yeah, let that sink in a bit. Plant lord. 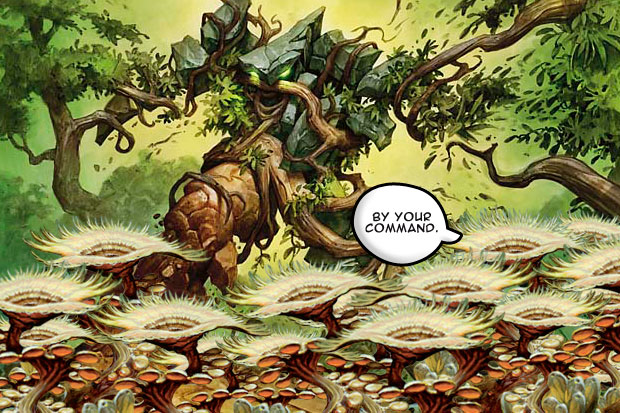 Plant Elemental can sacrifice a Saproling if Life and Limb is in play. Wall of Blossoms is a classic defender. Snapping Creeper and Vinelasher Kudzu are landfalling Plants, hitting both of our deck's core concepts. Khalni Garden offers a free 0/1 Plant token with your land.

As for ramping, Khalni Heart Expedition, Search for Tomorrow, and Harrow (which has extra utility when you can sacrifice a blocking Saproling Forest) can do the job. Terra Eternal, meanwhile, returns in this deck to protect our Saproling Forests from a devastating Seismic Shudder.

I wound up going with Saproling Symbiosis instead of Scatter the Seeds, as seen above. The Invasion sorcery is mentioned in Chris's article and is generally spectacular alongside Life and Limb. 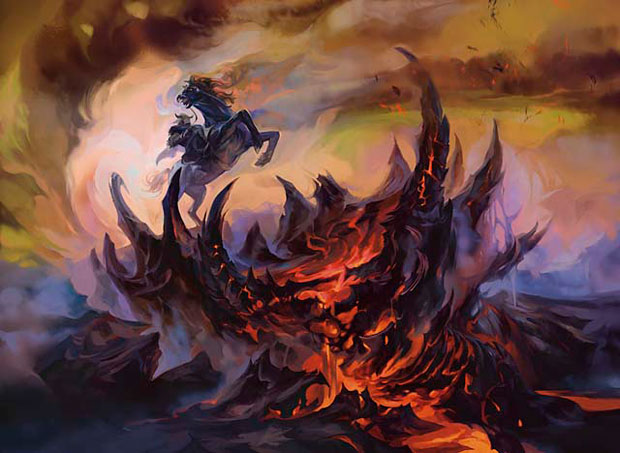 Of the new Worldwake lands, my personal favorite one is Lavaclaw Reaches. Red has always been my favorite color in Magic, and more often than not black is runner up, so it makes sense that I like the red/black one. What really draws me to it, though, is its firebreathing ability. Now, technically, it's not firebreathing on a technical level. Let's call it "Demonspining"—after Demonspine Whip, of course. 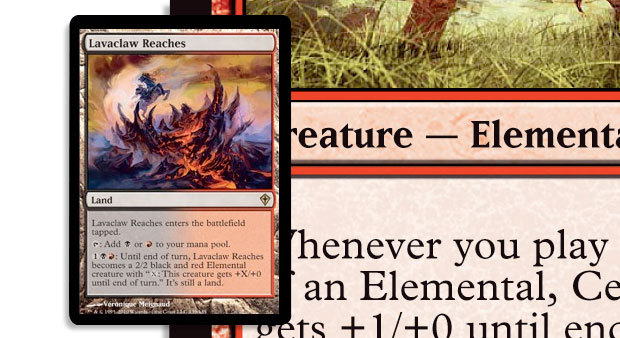 Lavaclaw Reaches also becomes an Elemental with an activated ability. And the way it's worded, you can use the Reaches to get a lot of mileage out of, say, Ceaseless Searblades. Pay

, and you get a free +1+0 for the Searblades. Repeat and swing-a-ling. Smokebraiders and Soulbright Flamekins can help pump up the Reaches for attacking as well.

The basic black Elementals round out this deck: Shriekmaw, Ashling, the Extinguisher (joining her red twin), Deepfire Elemental, and Igneous Pouncer. Flamekin Harbinger can find all of them. Expedition Map, meanwhile, can find Lavaclaw Reaches.