ey, how did you get in here? Never mind, just go away. I'm working on some very secret projects today, and I can't have you snooping around the Lab. Go on, leave. Get out. Shoo. There's nothing to see here.

All right, now that that's taken care of... wait, you're still here? I thought I told you to go away. *Sigh* I'm not going to get rid of you, am I? Well then, I guess I might as well show you my latest projects. You can't tell anyone, though. The guild of shadows would be very unhappy if word got out about my little experiments.

The Dimir are a sneaky bunch. They're quite adept at getting around any enemies that might stand in their way, and they will often attack your mind rather than your body. There's less evidence that way, and turning you into a gibbering madman is just as good as killing you. 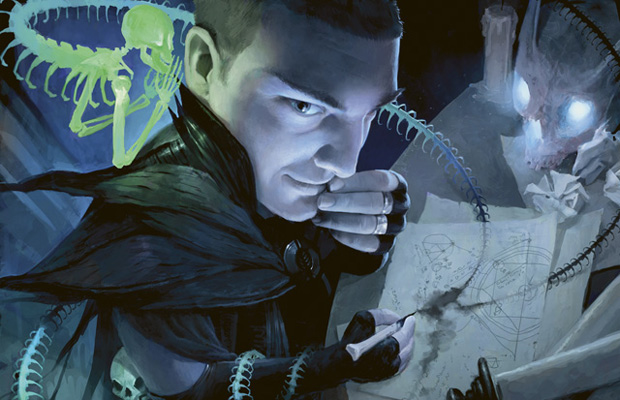 Whispering Madness is exactly the kind of thing the Dimir love to play with. It messes with your opponent's head while giving you new knowledge to work with. The key to making a card like Whispering Madness work well is to make sure your opponent has more cards in hand than you. Preferably a lot more. Fortunately, there's an enchantment from Lorwyn that can make that happen. Forced Fruition makes your opponent draw seven cards every time he or she casts a spell, ensuring that his or her hand is always full of cards.

Now, your opponent will still have to discard down to seven cards by the time you get to cast Whispering Madness on your turn, but there's a fix for that as well. Anvil of Bogardan eliminates the maximum hand size for all players, making your opponent keep all those cards in hand and letting you take advantage of that with Whispering Madness.

After a Whispering Madness, you'll have just as many cards in hand as your opponent, making Spiraling Embers deal almost as much damage as Runeflare Trap, with the added ability to hit creatures as well as players. Although it doesn't work quite as well with just a Forced Fruition as something like Sudden Impact would, the ability to double as removal makes up for the potential downside.

As perhaps the most effective tool for abusing the large hand sizes, Sword of War and Peace can cause massive life swings when it connects with your opponent. A single hit with the Sword should gain you enough life to put you out of danger for a turn or two, and a second hit is often lethal.

Both Whispering Madness and Sword of War and Peace require you to be able to deal combat damage to your opponent, so we'll need some creatures to make that happen. Invisible Stalker is the prime suspect, since it's immune to targeted removal as well as blockers. Dimir Infiltrator provides additional support. Its 3 toughness makes it a bit harder to kill than the other options, and the transmute ability lets you search for Anvil of Bogardan if you don't draw one. I'll also toss in a singleton Go for the Throat to transmute for if you need removal.

Prosperity is a classic tool for filling hands, and it works doubly well in this deck. You want your opponent's hand to be full of cards, as well as yours, and Prosperity does both at once. At only one mana to cast, it's effective even if you can't afford to dump a ton of mana into the X cost.

Forced Fruition and Prosperity both require you to have a good amount of mana available, so I'll turn back to my favorite mana artifacts to help out. Coalition Relic and Worn Powerstone can both set you up to have six mana on turn four. Although each has its downside, with Coalition Relic requiring you to save up for a turn and Worn Powerstone only producing colorless, both of them make it much easier to drop an early Forced Fruition, which is key to getting the fastest possible starts with this deck.

4 Runeflare Trap 1 Go for the Throat


Getting More for Your Mana

Back in the original Ravnica, a cycle of common dual lands helped players fix their mana in Limited by tapping for two mana—one of each of the guild's colors. Dimir Aqueduct was the secret guild's piece of the pie. Lands that produce more than one mana are often ripe for abuse with effects that untap them, as many players saw with the devastating power of Tolarian Academy, a card that is now restricted in Vintage and banned in everything else. Although no one would argue that Dimir Aqueduct is on that level, it can still give you a lot of mana if you have a way to untap it. In fact, with the right cards to work with it can give you an unlimited amount of mana.

Fatestitcher has the ability to tap or untap any permanent with a simple tap. No additional mana required, no targeting restrictions. If you target a Dimir Aqueduct with that ability, the Zombie is essentially tapping for two mana, one blue and one black. Now, if that Fatestitcher is enchanted with Freed from the Real, you can spend that blue mana to untap it, letting you get another two mana. Repeating this process gives you an arbitrarily large amount of black mana to funnel into an Exsanguinate.

Although it costs one more mana, Tidewater Minion can also perform the infinite-mana trick, and Pemmin's Aura can double for Freed from the Real, with a few extra abilities tacked on as a bonus. I'll also include Profane Command to back up Exsanguinate. Although the Command lets you choose two of the four modes, the life loss is the only one you'll really need.

Lotus Vale is another land that produces more than one mana, and with Fatestitcher and Freed from the Real, it gives you unlimited mana of any color. Simply tap Lotus Vale for three blue, then use that to untap Fatestitcher, untapping the Lotus Vale each time and getting three mana of whatever color you choose. Tap the Vale for blue again the last time, and you're back where you started.

Dispel helps you fight removal, and Doom Blade and Murder will give you some of your own, helping you survive to pull off the combo. Ponder will let you filter through your library to find the pieces you need, making sure you can put the three-card combo together quickly.

It's worth noting that Fatestitcher has unearth, which can not only give you another chance at going infinite if your opponent kills it but can allow you to combo off even faster than you would otherwise be able to. Consider this series of plays, assuming you're on the draw:

, then untap it with Fatestitcher and get another

. Use the black and one of the blue to cast Freed from the Real, and the last blue to untap Fatestitcher again. Now you can combo off and kill your opponent with Exsanguinate for a billion.

Granted, that's not a particularly likely series of events, but it's not out of the realm of possibility, either. The haste granted by unearth can let you combo off right away, without spending a turn hoping your opponent doesn't have removal.

Untap of the World

4 Freed from the Real 4 Pemmin's Aura


Duel of the Dimir

These shifty agents of espionage aren't exactly accustomed to a head-to-head battle, but that's just too bad for them. I've got an arena that needs some new blood, so it's time to do or die for our elusive assassins.

Prosperous Death paid 2 life for an untapped Water Grave and cast Anvil of Bogardan and Worn Powerstone. Coalition Relic got another charge counter, and the turn passed to Untap of the World, who discarded Pemmin's Aura to the Anvil and passed the turn. Prosperous Death discarded Whispering Madness, played a Swamp, and cast Prosperity for seven. Prosperous Death went in for the kill with two Runeflare Traps, but both were countered with Dispels. Untap of the World discarded Fatestitcher to Anvil of Bogardan, then unearthed it and enchanted it with Freed from the Real to combo off with a giant Exsanguinate.

The Results are In

I've enjoyed looking through all the submissions for the Orzhov deck contest as they've poured in, and by the time this article goes live I will have selected the best of the bunch to feature here on From the Lab. Tune in next week to see the winners and, until then, may you have the wits and skill to avoid being captured and tortured for information by enemy agents. See ya!