A Lot of EXP Points

ello and welcome back to the Lab! Today I've got a lot of interesting ideas in the various windows of this metaphorical shop for Johnnies and other casual Magic players. Of course, after two straight weeks of barren wasteland (non-theme weeks) I'm happy to return to the land of thematic glory, and this week offers one of the most intriguing themes from Rise of the Eldrazi: The "levelers."

No, I don't mean Leveler, the infamous Construct from Mirrodin, or even its Darksteel counterpart Eater of Days. Although their colorless nature and inflated power and toughness might give them reason to fit in amongst the Eldrazi themselves, I'm speaking of those creatures that bear the new mechanic level up. Apparently inspired by Figure of Destiny (as some designers have pointed out), the only drawback these levelers bring to the table is the amount of mana and time to make them realize their true potential. 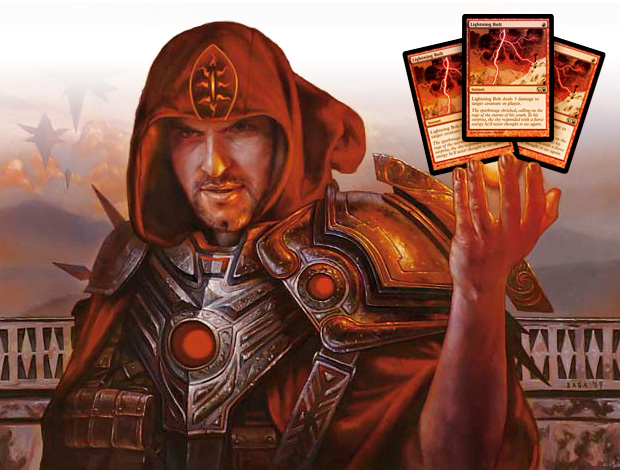 Once you make it there, though, their true potential is more than worth the investment. The common Knight of Cliffhaven can become a freaking Serra Angel when fully leveled up. Kabira Vindicator's first benefit is a mere Glorious Anthem, and its second is an unprejudiced Muraganda Petroglyphs. Of course, the Vindicator itself doesn't receive these benefits, but as a 4/8 (yeah, really) it probably doesn't need them. Brimstone Mage's full power is scary, as anyone holding a handful of Lightning Bolts would be. And Guul Draz Assassin is just that: An ominous creature that first becomes a weenie snuffing machine, before turning its doubly frightening gaze on Woolly Thoctars as well.

I could go on, but I don't want to spoil today's decks. Speaking of those, all three are fueled by reader ideas, to which I must extend a virtual hand of thanks. Apparently levelers have my readers abuzz with Johnny ideas, perfect for today. I hope I don't need to say: Keep the ideas coming!

We'll start off today with a great idea that came from reader William Houser. A couple of weeks ago, I requested help from readers to explore deck ideas for Renegade Doppelganger and Thought Gorger, two puzzling rares that I just couldn't crack. William came up with a great use for Renegade Doppelganger that meshes perfectly with this week's theme. (Thought Gorger lovers: tune in next week!) 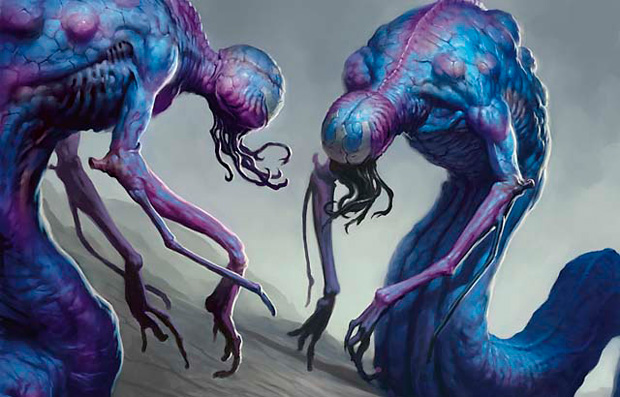 William's idea was to use the Doppelganger's copying ability to become a leveler as early as turn 3 and begin leveling up. The key aspect here is that although Renegade Doppelganger will cease to be a Student of Warfare at the end of the turn, it will retain all of its level up counters. Then, as William says with gusto, "Once it is up to six, we can play Lord of Shatterskull Pass and clear the opponent's board. At eight we can make it a giant dragon (with Kargan Dragonlord.) Twelve lets us use Transcendent Master. In this way the Doppelganger serves as a way to level our finishers before we draw them, and swing with haste once we do." 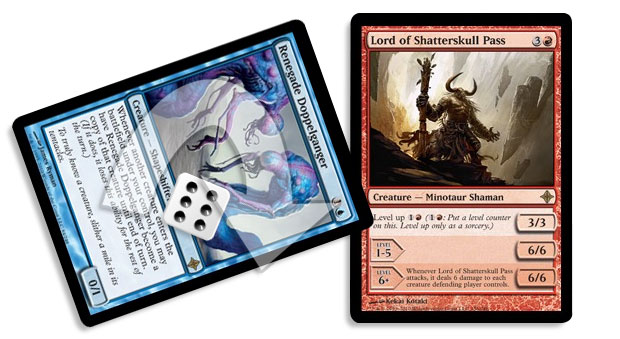 Renegade Doppelganger's pseudo-haste basically gives haste to each creature in your hand. It's like a creepy, blue Battle Rampart. And once you've loaded it with level up counters, each level up creature that you draw instantly becomes the best version of itself.

William also included a ton of tips for playing the deck. "The Cryptologist pushes you through the deck. Æther Tradewinds helps with tempo and bounces Venerated Teacher. Later, it can bounce our finishers so they can 'swing' again. Time of Heroes just seems too obvious. Student of Warfare is important to the deck's strategy, being a 1 converted mana cost leveler that levels up for

. This means I can play it and a Venerated Teacher on turn 4 and get two or three counters on the Doppelganger."

Awesome stuff. William's original list didn't have Lighthouse Chronologist, so I added it with the funny play in mind of playing a Lord of Shatterskull Pass, sweeping your opponent's board, then casting a Chronologist post-combat and taking another turn soon after. It also has a cheap level up trigger.

One card that had readers buzzing was Training Grounds, even despite the fact that I covered it immediately following Rise of the Eldrazi previews. Apparently, it has great synergy with the levelers, reducing the cost of their level ups and quickening the pace to their full potential. 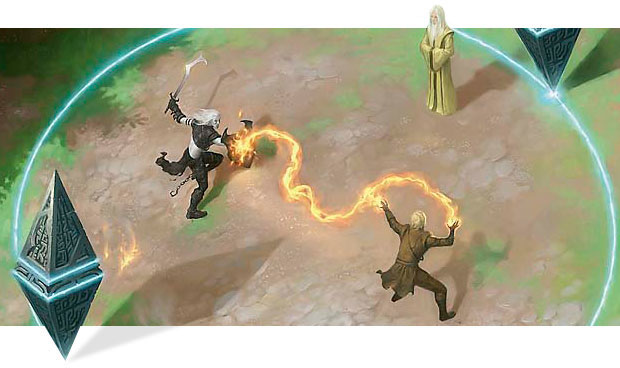 What reader Sebastian No-Last-Name was excited about was Training Grounds and Umbral Mantle. According to him, you achieve infinite mana if you have a creature that can tap for two mana. Tap the creature for two, spend only one to untap it with the Mantle, and repeat! A recent creature that fits this description is Joraga Treespeaker, which is perhaps the quickest of the levelers.

and level it up again. It's only turn two and you've (appropriately) made it to level 2 already! In a high-energy Elf deck (like the one I made in my Cast Through Time preview), the Treespeaker is insanely effective.

Joraga Treespeaker wasn't the only leveler in Sebastian's decklist. 16 total levelers made the deck, including the marquee (at least for me) Kazandu Tuskcaller. As Sebastian says, "Umbral Mantle plays nicely with Kazandu Tuskcaller and Enclave Cryptologist, even without the infinite mana combo online." And with infinite mana, things get crazy. Infinite Elephant tokens? Drawing your whole deck with the Cryptologist, including your singleton Spawnsire of Ulamog, which, "can, if you have any spare infinite mana left, find an Emrakul, the Aeons Torn and swing on your new turn with your infinite creatures." 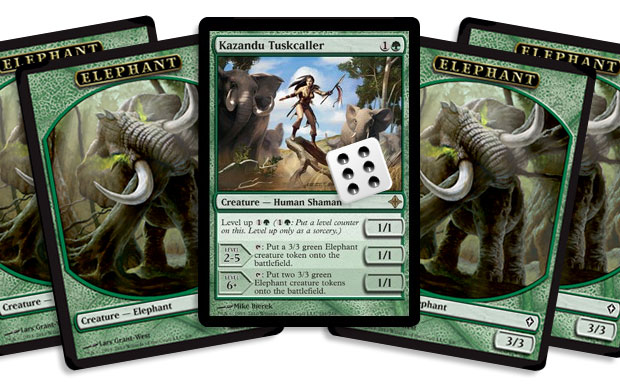 In my contributions to the deck, I'm going to add some copies of Doubling Season (don't shrug.) The Season is ridiculous with the levelers, the Tuskcaller in particular. With the Season in effect, it'll only cost

over time to fully level up the Tuskcaller, at which point you can tap for FOUR Elephant tokens. I also want to use Champion's Drake sometime today, and here's the opportunity.

Dizzy Spell can find a lot of important cards in the deck. Gelatinous Genesis and Wolfbriar Elemental are other ways to take advantage of infinite mana. Sebastian originally had Halimar Wavewatch in the deck, but I subbed the stiff Merfolk for the exciting Beastbreaker of Bala Ged. Someone that breaks ... beasts? Don't question that.

Echo Mage is one of the more visually stimulating levelers in the set, from the portrait-esque artwork to the critical word 'twice' that seems to throb from its sentence. Brandon Isleib built a kooky deck with Echo Mage, intending first and foremost to copy Shared Discovery, the newest 'draw three' with an extra price. Because Echo Mage copies spells and doesn't cast them, you won't need to tap four other creatures for the copy of Shared Discovery. 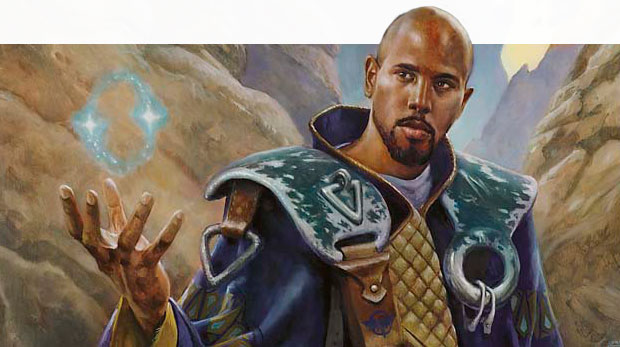 To get a bunch of cheap creatures into play, Brandon went Standard legal and used small deathtouchers and creatures that accomplish something on their way onto the battlefield. Ornithopter is a happy inclusion. Then Brandon must have thought about Might of the Masses, the new pump spell from Rise of the Eldrazi. With all the cheap bodies running around, Echo Mage could turn a meaningless 'Thopter attack into a supercharged strike.

I decided to add Lorescale Coatl to the deck. The draw happy Snake is colored correctly and will swell with Shared Discovery, echoed or not. A copied Mysteries of the Deep should reload your hand and make the Snake a true threat. And since a goal of this deck is to make a ton of creatures, Unified Will might be worth a try.

That's all for today, see you next week!