elcome back to the Lab. Enter, please! Back...this way! Follow my voice! Okay, take a left at the plasma boiler, then a right by the hanging dodo skeletons...try to find a giant antechamber type place. There? 'kay.

That was the door locking behind you. You'll never escape. Unless you hit Back.

Content with internal imprisonment? I sure am. So let's get to this week's shenanigans, which have a bit of a retro vibe.These decks have been gradually filtering in over the summer, gathering in the cluttered train station that is my inbox. I felt these deck ideas could be strung together for a column, because they each revolve around some older combos and cards from Magic's past. I usually discuss material from the most recent Magic releases (like last week, for example), but this week I felt like stepping back and offering a grab bag of slightly older goodies, cooked up by some inventive readers.

Looking forward to the upcoming weeks, it seems fitting to drift into the past for a bit, if only to rev my nostalgia gears in preparation for Return to Ravnica. My bookkeeping will likely extend into next week, when I'll give the rotating Scars of Mirrodin block a send-off of sorts.

Enough intro. There are some cool ideas to show off! Let's get to it. 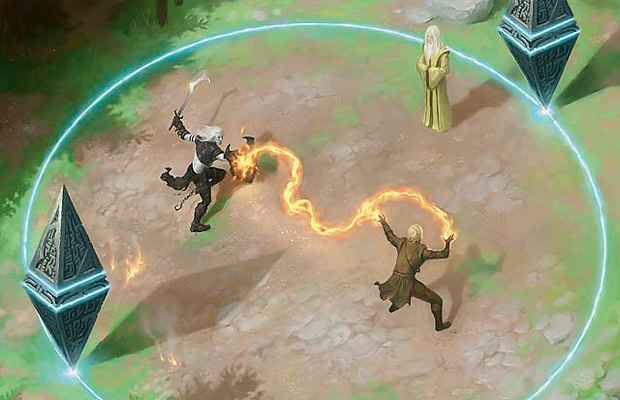 Any effect that lowers the costs of mana payments is welcome in my book of spells. Many of these cards lend themselves to broken combos, and Training Grounds is certainly affiliated with the silly. Reader Alex Churchill emailed me with his delightful spin on the card. He wrote:

Just thought you might like to see a recent comboriffic deck I assembled. With the three key cards on the table, you get the ability "

: All creatures you control get +8/+0, first strike, and trample." And the three cards in question cost one, two, and three mana. It can be pretty explosive. :)

to give you its jackpot of eight red mana, while incidentally giving your team trample; and Inner-Flame Igniter will pump all your creatures at the low, low cost of

, throwing in first strike somewhere along the line for free.

This version of the decklist is Modern legal; it can be varied a lot for older formats.

While I knock back a shot of poison for that sub-headline (laziness triumphs), here's Will Cooper's adrenaline-junkie style, life plummeting and soaring deck, featuring Rhox Faithmender. ("I thought today was solely old cards!!!" Well, Rhox Faithmender is basically a walking Boon Reflection, for your info, Alleged Mystery Voice That I Actually Produced.)

The point of this deck is to win by going into negative life totals. My favorite win condition is to get down to at most 2 life (possibly with the help of Hex Parasite), cast Soul Echo, then Reanimate an Arbiter of Knollridge with Rhox Faithmender on the battlefield, which will put you to 50+ life for Test of Endurance if your opponent is still at 20. But there are other fun routes to victory here, too. Example: Put a singleton on the bottom of your library with Mistveil Plains, use Angel's Grace and Spoils of the Vault to get rid of all of your life, then cast Repay in Kind. It's a little awkward that Arbiter of Knollridge and Sorin Markov are the only ways for you to gain life, but I like the concept anyway.


I enjoy a good hodgepodge every now and again, and this deck finds a balance between quick reanimator and random life-based singletons that spice things up (Repay in Kind, Sanguine Bond, the aforementioned and long-lost Soul Echo). Other cards to consider for a deck like this: Ad Nauseam; Soul Conduit; or even diverse, multi-targeted draining removal like Essence Drain, Consume Spirit, Wet Willie of the Damned...

Blocks of reminder text aside, suspend was awesome. Paying time instead of mana for a spell was a stuck-in-your-brain kind of concept, and I for one would be happy to raise a flag for its future return (perhaps suspend itself is in suspension...), if the mechanic weren't singlehandedly responsible for the upswing in complexity creep.

One of my favorite suspend cards is Greater Gargadon. Capable of mass sacrifice for a larger purpose, this essentially 9/7 French vanilla beatstick has lumbered into many a Johnny strategy. Reader Steve Theobald messaged me with his take.

I believe I have stumbled across a bit of a gem of a deck [that is] very unusual and leaves people posting things like "???" "what just happened?" and "huh?" after the game ends on Magic Online (my favorite type of reaction :) ). It has about a 60% win rate (but 100% fun rate!).

The deck centers around landing a Psychogenic Probe, then sacrificing all your other permanents to a suspended Greater Gargadon and following up with a Bitter Ordeal. Ordeal forces the opponent to shuffle his or her library numerous times and the Probe activates each time to reduce the opponent to 0 in one fell swoop.

Flavor wise, it's pretty evil: first you show your opponent the looming threat of a Greater Gargadon then everything starts exploding as the Gargadon comes closer, then you subject the opponent to a terrifying ordeal which causes them to forget half of their memory, and while frantically trying to reorganize their thoughts they are drilled in the head repeatedly until death (thats how I like to see it anyway! ;) ).

Viscera Seer/Greater Gargadon—Mass sacrifice outlets for the big finish.
Mortarpod—Two permanents to sacrifice + removal
Perilous Myr—Perfect for sacrificing to neutralize an early threat or helping get in some extra damage to supplement the probe
Ratchet Bomb—Can deal with problem permanents and helps the big finish
Ichor Wellspring/Dusk Urchins—Gargadon fodder + card draw
Pawn Of Ulamog—Helps you get to the critical number of sacrifices by turning dead creatures into self-sacrificing, mana-producing creatures
Diabolic Tutor—Sometimes you need to search up the last piece
Black Sun's Zenith—Nice sweeper plus can draw cards off Dusk Urchins
Ghost Quarter—Perfect land here, on the big finish turn you can sacrifice it to put two permanents in the yard and make the opponent shuffle if they foolishly search out a land (they always do!); can also deal with problem lands