ello, and welcome back to the Lab. This week I'm tackling the fuel behind the entire game of Magic, mana itself. There's a wide selection of our favorite intangible energy to choose from; the most commonly used are the five different colors and the pale "colorless" mana. Of course, since Magic's an infinite chasm of mental activity, there are bound to be some oddballs in the mana family. My previous favorite of these was snow mana, introduced in Coldsnap. Appearing as a snowflake, this mana came only from snow permanents. 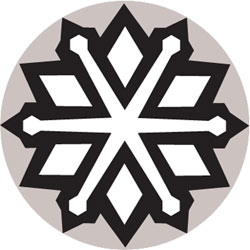 Snow mana intrigued me, but I was always sort of bothered that the snowflake symbol never made it into actual mana costs. As I've said many a time, I love weird-looking Magic cards, and such a card would definitely qualify. Five years later, New Phyrexia has come out with a new set of bizarre mana symbols, and this time around they went where snow mana had never been before. As the saying goes, one small step for mana, one giant leap for manakind. (So...in the physics of a Magic card, the converted mana cost is the moon to the text box's Earth? And the Phyrexians are Neil Armstrong? And snow mana represents the Russians? Actually, that fits quite nicely.)

Apparently I love weird tangents as well. Anything weird, really. Let's continue onward to this week's weirdness, based around the Phyrexian mana symbols and the cards that bear them. (Although that was a cool tangent. Now every time I see a crazy and unfathomable galactic presence in the cosmos, I'll think of Reaper King.)

Ahh, paying 2 life. Phyrexian mana has brought it back into the mainstream, but like any quality trend, it has been in the spotlight before, in some iteration. The most popular instance of paying 2 life showed up on the ten dual lands of Ravnica block (Temple Garden, Steam Vents, etc.) Historically the phrase has thrived in black card draw, as seen in cards like Greed and personal favorite Street Wraith.

Some Phyrexian-mana cards only bear the symbol in their mana costs, meaning you have the option to pay 2 life only when casting them. Others, though, have the symbol nestled in their text boxes. I'm talking specifically about the deceptively good Souleater cycle. At common, these guys showed up many a time during New Phyrexia Prereleases (at least, they did at mine.) Blinding Souleater aside, the others can repeatedly suck 2 life out of you if necessary. Of course, making Trespassing Souleater unblockable over and over at the cost of lots of life seems incredibly redundant and silly...

...unless you're a reader named Joe D., who decided that doing so would be wonderful if you also had a Soul Conduit primed in the background. Pay ghastly amounts of life to the Trespassing Souleater (putting yourself ideally at 2 or 1), then activate the Conduit. Suddenly it's your opponent who has the low life total! And the Souleater is unblockable, so swing in for the surprise win.

A lot of readers mentioned that I "forgot" about Soul Conduit in regards to my Melira, Sylvok Keeper + Phyrexian Unlife deck a couple weeks ago. Perhaps I did. Or I was strategically saving the Conduit for this week. Regardless, another toy that Joe mentioned was the wonky Wall of Shards to get your opponent's life total sky high. The 1/8 flying Wall for two can keep attackers at bay while you cast your Fabricates and other tutor spells to find Soul Conduit. Even without Trespassing Souleater, you can use this combo to acquire a ton of life.

Playing Soul Conduit in the first place allows me to stuff the deck with fun Phyrexian-mana cards. Norn's Annex and Cathedral Membrane add extra defense while you set up the combo, and Gitaxian Probe is a perfectly acceptable Peek for this deck. Spy on your opponent's hand and make sure he or she has nothing to stop you. Sounds like Phyrexia to me.

While we're on the subject of Phyrexian-mana cards, let's address the new crazy. Phyrexian Metamorph is unreal. It was nice casting you, Clone and Sculpting Steel, but this weird silvery ooze of tentacles has taken both of your places at the same time. The blue Phyrexian symbol only makes the Metamorph more versatile, being both a three-drop and a four-drop. 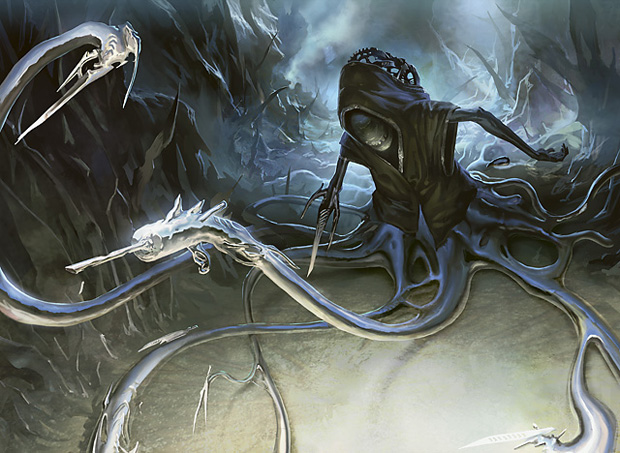 Reader Daniel Haas emailed me about an interesting three-card combination involving the Metamorph that many people (including me) seemed to miss:

Make sure you have the Suture Priest and the Relic-Warder on the battlefield. Play the Metamorph copying the Warder. As it enters the battlefield, it is now an artifact creature Relic-Warder, so it will trigger its ability to exile an artifact as well as the Priest's lifegain trigger. Gain 1 life and make the Metamorph target himself. Then, when you let his trigger resolve, he will (just barely) cause his second ability to trigger to bring himself back to the battlefield. Rinse and repeat to gain N life, where N is any number of your choice.

I love subtle stack trickiness like this, so props to Dan for this neat combo! As he also mentioned, "The great part about this combo is that it doesn't even require cards that are terrible alone. All three cards are fine utility." Which is why I'm shoehorning this combo into the above deck skeleton. Lots of combos in one deck? Sounds fun to me! And I'll throw in a singleton of Felidar Sovereign, too.

It's All the Rage

Next, I'll take on the only card that truly begs to be built around with other Phyrexian-mana cards, Rage Extractor. Speaking as a huge fan of direct damage (when the mood is right), Rage Extractor got me salivating. It didn't take me long to pair another eye-catching red Phyrexian card with the angry artifact: Moltensteel Dragon. Certainly capable of winning the game by itself, the Dragon will prompt a blast of 6 from Rage Extractor.

What are other expensive cards that work here? Slash Panther effectively becomes a hasty 9/2 for four mana and 2 life. Thundering Tanadon is a beefy beatstick that comes with an additional 6 points of Rage damage. And Act of Aggression becomes even more aggressive, dealing 5 on its casting. 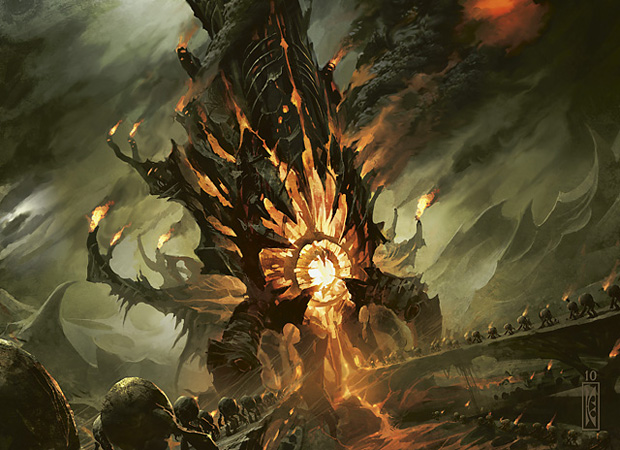 Of course, with all this life payment, I should be careful and keep my life total at a reasonable number. There's lots of ways to accomplish this goal—giving lifelink to one of my fatties, for instance. Basilisk Collar is cheap and versatile. But a wackier route (and thus, a route I shall embark on) would be the underused Tainted Sigil from Alara Reborn. Since you'll be paying lots of life and dealing lots of damage in the same turn, the Sigil could swing you a profit. And it's not necessarily a one-shot effect if I also have cards like Remember the Fallen bringing back my artifacts and creatures (like fallen Rage Extractors or Moltensteel Dragons.) And you know what? I'm adding Children of Korlis too. C'mon kids, let's go play with the Phyrexians!

Rage Alongside the Machine

It's mostly red- and white-based, with a splash of black for the Sigil, which I find amusing. There's lots of ideal game plans, the most optimal being a turn-two Sphere of the Suns into a turn-three Rage Extractor, or any of your Phyrexian phour-drops.

I'm proud to own one of the first fancies that Birthing Pod tickled (through my pseudo-preview of the wacky card) but since New Phyrexia's release I've gotten all sorts of fun emails from readers with their own Birthing ideas. As I mentioned previously on this subject, the Pod is ridiculously open-ended and slides into tons of strategies.

Nate Hannon happened to send me his take on Birthing Pod, and it's mostly genius. He used Dross Scorpion (one of the better combo enablers in all of Magic, and definitely the best Scorpion ever) as the Pod untapper of choice. From there, I hand the microphone over to Nate. Pay attention, though...

Here's another way to go infinite with Birthing Pod. It's a very complex combo, but all you need to start it is a Birthing Pod, a Dross Scorpion, and a Cathodion - and the Birthing Pod can find the other two pieces.

Use the Birthing Pod to sacrifice the Cathodion and find a Su-Chi. Use the trigger from the Dross Scorpion to untap the Pod. Repeat this process to turn the Su-Chi into any of the five-mana creatures in the deck, then into Sharuum the Hegemon (getting back Cathodion), a Myr Battlesphere, a Filigree Angel, an Inkwell Leviathan, and finally Kozilek. Assuming you pay life for all of the Phyrexian mana costs, this costs a total of 7 mana and 14 life, but it gives you 7 mana and at least 21 life (thanks to Filigree Angel and the Myr tokens).

Now, turn the Cathodion, which you retrieved with Sharuum, into a Su-Chi, then into a five-mana creature, Sharuum (getting back Cathodion once again), and Quicksilver Gargantuan, copying Kozilek. This costs 4 mana and 8 life, and yields 7 mana. The legend rule sends both Kozileks to the graveyard, which then gets shuffled into your library. You have gained 3 mana and some Myr tokens. If one of the five-mana creatures was Anodet Lurker or if you had another artifact on the battlefield (including a Myr token from a previous iteration), you have also gained life. Repeat for an arbitrarily large amount of mana and Myr tokens.

To finish the combo, stop the first chain at Myr Battlesphere, then stop the second at Golem Artisan. Give the Battlesphere haste and attack for as many points of damage as you have Myr tokens. The Academy Ruins and Patchwork Gnomes can help if you draw too many copies of one of the creatures.

I knew Birthing Pod was capable of great insanity. This is that great insanity. I'd want to fiddle with the mana base and get some Halimar Depths in there, but everything else is amazing. I love that the combo requires me to play with all-around fun cards like Quicksilver Gargantuan, Myr Battlesphere, and Filigree Angel. Using Kozilek, Butcher of Truth as a library reset is clever as hell. This deck definitely made me grin.