ello and welcome back to the Lab! Here at the official laboratory of crazy combos and overall wackiness, I've previewed many a broken artifact during many spoiler seasons. (Master Transmuter and Time Sieve especially come to mind.) And now that we're in the thick of previews for Scars of Mirrodin (surely the most artifact centralized block since its 2003 predecessor, Mirrodin) it would seem fitting that the pattern be continued. Right?

Apparently, the Magic gods have a thing for 'fitting', so indeed I do have the honor of unveiling another broken artifact. Kuldotha Forgemaster is a master of many things: Forging, Tinkering, and Not Appearing to Be a Creature At All. See his (her? its?) likeness and be amazed. 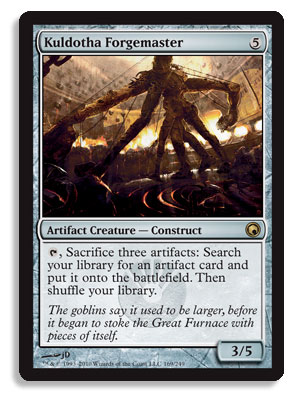 In a strange way, Kuldotha Forgemaster reminds me of my previous metallic previews. Time Sieve could sacrifice other artifacts for a beneficial effect. Master Transmuter could efficiently pop expensive artifacts onto the battlefield (and was a master too). But Kuldotha Forgemaster can carve out its own niche of broken artifactness, and I'm here to guide it along the path.

Kuldotha Forgemaster does have one characteristic that separates it from my other preview cards: The lack of novel-length FAQs. It's true that Kuldotha Forgemaster is relatively straightforward. First and foremost, it's a 3/5 artifact creature for five colorless mana. Easy enough.

Secondly, it can tap itself and sacrifice three artifacts to fetch any artifact from your library and put it onto the battlefield. Note the flexibility here: The Forgemaster can (like Time Sieve) sacrifice itself as one of the three required artifacts.

Now, where have we seen this effect before? Hmm, sacrificing artifacts to fetch artifacts ... oh right, Tinker. One of the most broken cards of all time, Tinker now lives on in this new, fixed version.

I'd say Kuldotha Forgemaster isn't that hard to build around. There are two obvious methods for using the Construct: Accelerating it out and quickly using it to find a Darksteel Colossus (an admirable strategy) or completely breaking it in half and using it as an infinite engine (much more exciting!) Thus, I'm going to build three decks today, two for the first method and another for the latter. 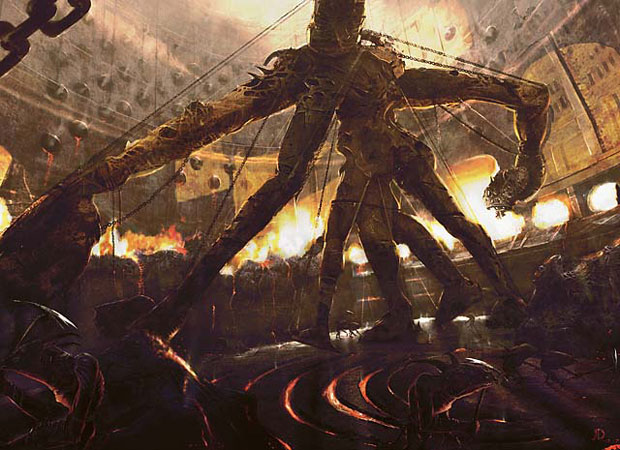 First though, let's talk a little bit more about just what artifacts we're feeding to the forge ... master. Any type of artifact that creates a benefit for being tossed deserves mention. Chromatic Stars and Spheres, as well as the new Runed Servitor, help you draw cards when they hit the black nets. The new Enatu Golem and Anodet Lurker will give you life. And the pluckiest of all artificial life, the Myr, just love getting sacrificed to things. At least, Myr Retriever and Myr Servitor do. The Myr Servitors in particular are perfect, as sooner or later you'll revive all the other fallen ones simply by casting another (and waiting for an upkeep).

... Okay, onto the first deck! The goal is to accelerate Kuldotha Forgemaster onto the battlefield as quickly as possible. Getting the Forgemaster up and running is the first task, and the second task is to pop any of the gigantic artifact cards in your library on the battlefield. Simple. We've got Akroma's Memorial, the aforementioned Darksteel Colossus, and Gleemax for fun. Darksteel Forge will render most removal obsolete, like a good nine-mana artifact should. Bosh, Iron Golem is a decent win condition if attacking with iron fattys isn't enough.


That was simple enough. If you didn't figure it out, the goal is to use Everflowing Chalice, Solemn Simulacrum, and Etherium Sculptor to cast the Forgemaster, and from there find a win condition of your choice. Alternately, use that trio of mana helpers to just ramp into your bigger cards.

Kay, let's delve a level cleverer. (Say that three times fast.) This deck stands at the crossroads of the two methods; between just fetching a big artifact and creating an engine. Eventually we'll win with an engine, but since the combo artifacts are so expensive, we might as well use the Forgemaster to fetch them out.

Confused? The first goal is to fetch or cast Mycosynth Lattice. Enshrined in the Johnny Hall of Fame (or it should be—in fact, there should be an actual Johnny Hall of Fame!), the Lattice will make everything metallic. You'll soon be able to sacrifice any permanent to the Forgemaster, including Pincher tokens! What are Pincher tokens, you ask? Ask Summoning Station. I just want to know what a regular Pincher is.

With this trio on the battlefield, the last piece we'll need is Thornbite Staff. While the Forgemaster isn't a Shaman (even though that would be visually sweet) equipping it for the full

is a small price to pay for infinite Pincher damage. What am I talking about?

With a Staff'ed Forgemaster, sacrifice three other artifacts to activate the Forgemaster. (They can be anything besides the combo-related cards.) Summoning Station will untap thrice, making three artifact Pincher tokens. Meanwhile, your newly untapped Forgemaster (because of the Staff) will have fetched a Darksteel Colossus. Now repeat this process, except you'll sacrifice two of those Pinchers and the Colossus itself. Since the Colossus shuffles itself back into your library, you can find it again (or Legacy Weapon.) In this way we won't run out of artifacts to keep the engine running.

Eventually we'll have infinite Pincher tokens. When you're ready to swing, fetch up an Akroma's Memorial and go to town with Pinchers of Wrath!


Kaleidostone can help in the off chance that you land Legacy Weapon. (The five-color artifact land base helps too, as well as giving the Forgemaster plenty of fodder.) Brittle Effigy is new and potent as far as artifact-based removal goes, so I'll give it a shot.

This last deck is along the same lines as the previous deck, but with less expensive artifacts. In this case, we're probably going to actually cast the combo pieces. 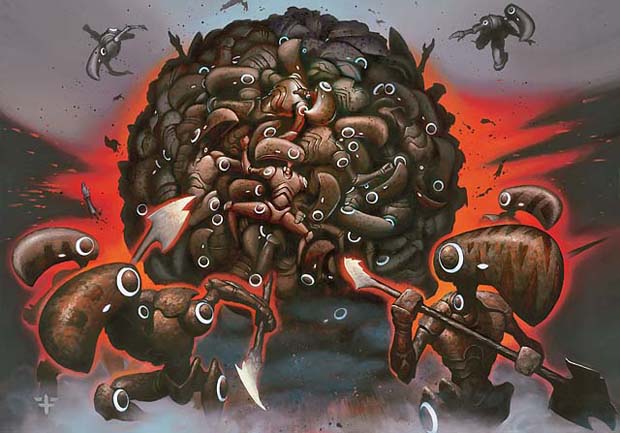 
The goal is to get Kuldotha Forgemaster out alongside Dross Scorpion and Junktroller. From there, we can kick things off by activating the Forgemaster (sacrificing spare Etherium Sculptors.) Search up a Myr Battlesphere, which makes four 1/1 Myr artifact creature tokens. Meanwhile, the Scorpion untaps the Forgemaster.

Now repeat this process, only this time, sacrifice the Battlesphere itself and two of the Myr tokens. Search up another Battlesphere, which makes four more tokens. Now, use Junktroller to put the fallen Battlesphere on the bottom of your library. Then the Scorpion untaps both your Constructs, and you'll eventually have infinite Myr tokens.

From there, it's easy to search up an Akroma's Memorial with the Forgemaster, and attack with a hasty Battlesphere, which will then deal infinite damage to your opponent. This all happens on one turn, which is pretty neat.