ey all, and welcome back to the Lab! I've got a special treat for you all at the end of today's column, but you'll have to read to the end to find out what it is! Well, technically you don't. Party-poopers.

Seriously though, stick around for some wacky decks, wacky banter ... and a slight error from last week. Seven days ago I posed three original formats for multiplayer, and was glad to see they were well received. As a giant fan of time travel in all mediums of fiction, I personally like Future Magic the most. Many readers loved Mind Swap Magic, but pointed out that I'd made a gratuitous error in its rules. For clarity's sake, here's what I said last week:

"If you could ever target a player (cast a spell or activate an ability with 'target player' in it) you could choose to ignore the effects of that spell or ability and instead, swap minds with them. For example, if you wanted to, you could cast Lightning Bolt targeting another player, and instead of them taking 3 damage, you could choose to swap minds with them. That player would then finish your turn, and you'd be behind another library.

The other neat quirk is with planeswalkers. As flavorful equivalents to players, I wanted to get them in on the action as well. The concept of loyalty means they are loyal to the player who pulled them from the Blind Eternities. For the purposes of this format, I'm going to say they intricately know which mind cast them, not which deck. In shorter words, if you control planeswalkers, they follow your mind around; they, like you, go to the next battlefield. So to sum up both rules, if you control a Liliana Vess, and activate her +1 ability, you could choose to switch minds with the targeted player (instead of having him or her discard) and Liliana would follow you." 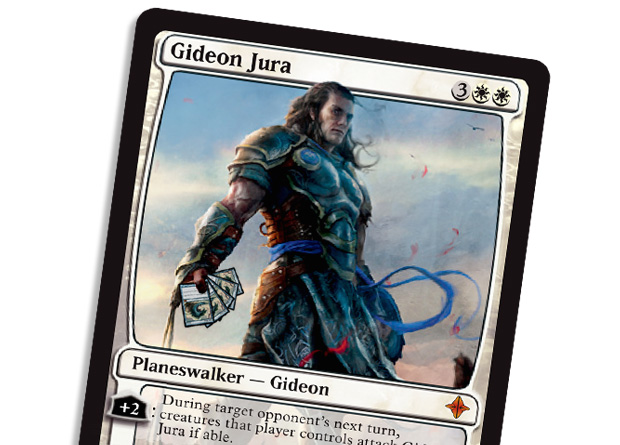 Many readers wrote in to outline the ultimate (possibly) griefer strategy ever: using the "+1" planeswalkers (Liliana Vess, Chandra Nalaar) and the "+2" planeswalkers (Gideon Jura, Jace the Mind Sculptor, and Sorin Markov) to gain control of every turn in the game. Simply target the player who would take his or her turn after yours, and do that every turn to accomplish this diabolical (and totally unfun) trick. Sooner or later, you'd rack up enough loyalty to unleash the ultimates, but the real ultimate would be the eternal mindlock on the board.

I knew I had to remedy this glitch, but I didn't want to outright ban the offending planeswalkers. So, I hereby alter the first rule as such:

Now, only spells that target players can offer a mind swap instead, which was what I truly had intended from the start. As you can see, I used Lightning Bolt, and not Prodigal Pyromancer as my initial example.

The planeswalker rule might be inherently broken in this format, but I didn't think it made sense on a flavorful scale to have a planeswalker that you (your unique mind) summoned follow the orders of a different mind. Still, if it is broken without a doubt (and I have played some matches in which it isn't), let me know and I'll cleanse it immediately.

In the penetrating line of black fatties that demand multiple sacrifices (a line which includes such horrors as Lord of the Pit, Delraich, and Salvage Titan), Demon of Death's Gate is arguably the most terrifying. Demanding life, blood, and time, three of the most precious resources of all, the Demon of Death's Gate is both ferocious and terrifying. 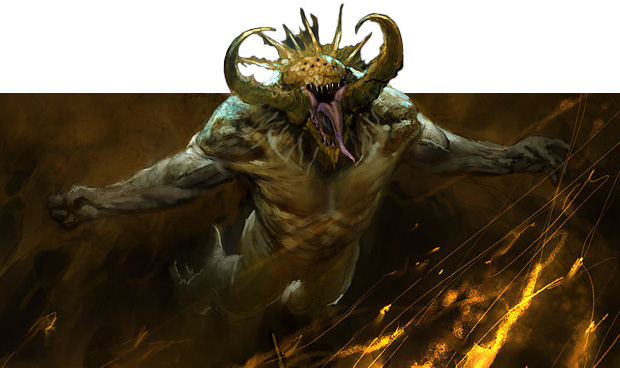 It's also a 9/9 flyer and trampler that can hit the battlefield on turn two.

Building around Demon of Death's Gate was harder than I thought it would be. It has what has always been Johnny's essential problem with interesting fat guys: At the end of the day, you're just swingin'. So I added another centerpiece that kept the deck in Standard: Mortician Beetle, a card I've been waiting to see print for a while. Not only is it a cheap black creature able to help the Demon hit the battlefield, but if you have three other creatures to spare, it's a +1/+1 (gaining) machine. Such a play would result in a 4/4 Beetle at the very least.

To help the Beetle out, I've chosen some cheap, sacrificial black creatures (which also help the Demon's alternate cost. Sweet!). Death Cultist (perhaps part of the Demon's cult) and Viscera Seer join the ranks—the Seer is quite exciting because it's cheap and can sacrifice creatures other than itself. Oh, and the scry is pretty nice. Guul Draz Assassin, meanwhile, is the possibly the best black one-drop in Standard.

Bloodghast is perfect in this sort of deck, repeatedly coming back for more. Reassembling Skeleton is sort of a poor man's Bloodghast, so I'll throw in two copies. Pawn of Ulamog threatens to make things unfair, especially if Mortician Beetle is kicking around. The Eldrazi Spawn tokens can help summon Butcher of Malakir (a.k.a. Win Condition Number Two) and Consuming Vapors (kill spell of choice).

This is simply a fun, straightforward, death-focused black deck built with Standard-legal cards.

Of all the five tribal lords in Magic 2011, I saw all but the white one coming. Merfolk, Elves, Goblins, and Vampires. Of these four, only the captivating Captivating Vampire was a new printing, and it's quite good. 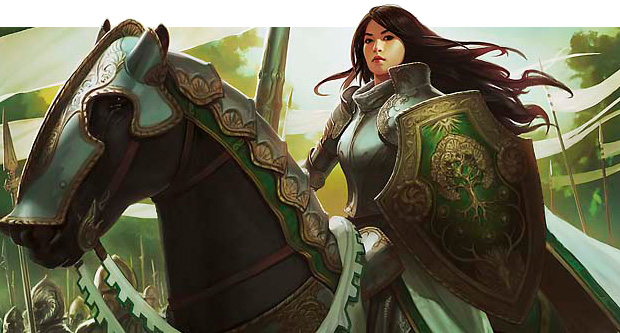 However, I did not expect to add Knights to that list as the white representative. Merfolk, Goblins, and Elves have numerous leaders from sets past, and even Vampires are well stocked, with a Nocturnus, Ruin-Sage, and a very famous Baron. Knights, in comparison, have only Auriok Steelshaper (that also likes Soldiers) and the admittedly awesome Kinsbaile Cavalier from Magic's past.

Now, we have Knight Exemplar, which follows the traditional build of tribal leaders with a converted mana cost of 3 and a simple global +1/+1. However, this leader makes all your Knights indestructible, and that's what draws me to it today.

That's a knightmare for opponents to deal with! In case you can't find your respective three or four drops, I've included some backups in Wilt-Leaf Cavaliers and Kabira Vindicator. The hybrid trio are formidable with or without lords on their side, and Kabira Vindicator can ramp itself into a global +1/+1 at first, with another later on.

4 Student of Warfare 4 Path to Exile

Again, simply another straightforward deck, this time a Knight-oriented take on White Weenie.

Time for some wacky. Let's take a long look at Stormtide Leviathan. At first glance, it's the ultimate islandwalker, so much so that it shuns all other types of attackers (except flyers). What's really cool about the big goliath, though, is its "every land is an Island" text.

Like I said with Demon of Death's Gate, every cool fatty ultimately wins by swinging, and this fine print is far more apparent for Stormtide Leviathan. It's an unblockable 8/8 for eight mana that stalls your opponent's attackers while it cruises to victory.

Here's my wacky idea, though. I want to take advantage of the amount of Islands on the board. I could unleash a Boil or Boiling Seas or Tsunami, but that's just no fun. I could use Mystic Decree (as previewer Adam Styborski suggested) but that would even lock up my big behemoth. 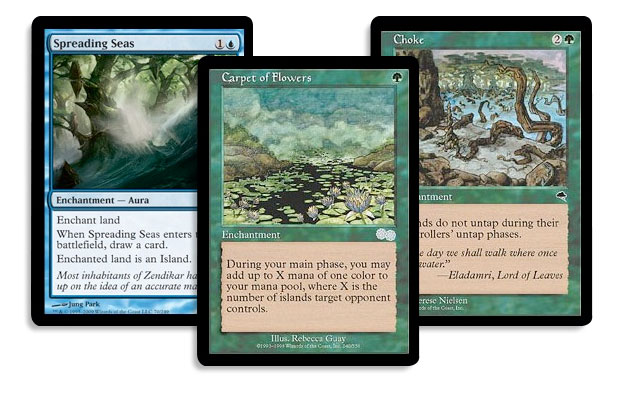 What I will do involves a small card called Carpet of Flowers. Even before the Leviathan hits the battlefield (and sends tunnels of mana into my pool via the Carpet) I plan on charging the Carpet up with cards like Spreading Seas. That way I can accelerate into the Stormtide Leviathan (and proceed to said tunnels of mana). I will also Choke my opponent. With all lands tapped and unable to untap, the board should be locked ... except for my magic Carpet of Flowers providing me mana from the very Islands that are tapped. Cool, eh? I'll also Typhoon my opponent when I can (preferably post-Leviathan). Typhoon, by the way, happens to be one of my favorite words all of time. Just thought I'd mention that.

Once you've Choked out your opponent, pick a storm. Whichever one you choose, Hurricane or Typhoon will destroy your opponent. That is, unless the Stormtide Leviathan gets them first!

I've got three ideas for a contest, but I want you all to decide which one makes the column. The first one is a simple build-around-this-card contest. (The cards in question are: Dragon Appeasement, Kazuul, Tyrant of the Cliffs, or Wild Evocation.) 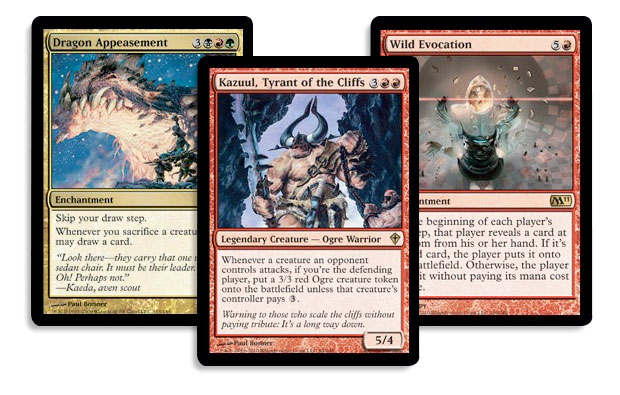 The second and third are wackier. The second is: Pick a word, between 3-5 letters long. Build a deck about that word, using only cards beginning with one of the word's letters. (So, if my word is WATER, I can only use cards whose title begins with W, A, T, E, or R.) Basic lands CAN still be used. (So I could still use Islands.) All letters must be represented. 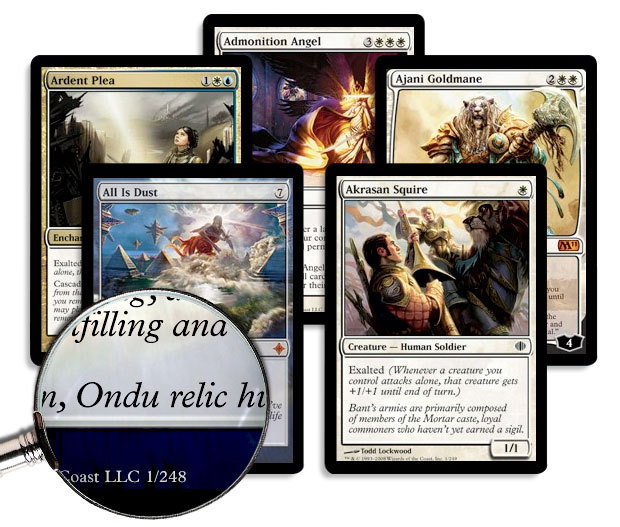 Thanks and see you next week!