ello to all! Welcome to the first new From the Lab column of this year, 2010. First and foremost I should start by explaining why this isn't the second one of the year, let alone the month. It looked like things were squared away for cleanly debuting into 2010, but some legal things went awry, and in the end, I had to miss a week. Sorry about that, folks!

So now I'm jumping right into the thick of Milling Week. Milling is, if anyone's confused on the term, Magic slang for the winning strategy of emptying all the cards from your opponent's deck, forcing him or her to draw from an empty deck and lose. The actual term came from Millstone, one of the first cards to be a potent weapon for this strategy.

Milling has (in my view) always been seen as a Cinderella Story when it comes to victory conditions. Whenever someone (usually piloting a "normal" beat-with-creatures deck) was about to lose to a milling deck, it always seemed exciting to me for some reason. This was before the Ravnica set was released, which in my playgroup's view was an important time for the mill deck. Cards like Glimpse the Unthinkable, Belltower Sphinx, and pretty much the Dimir guild in general made these decks increase in viability.

If you're wondering if I'm going anywhere with this, wonder no more. I've just got a game-play story that I find very funny and is definitely milling related. If any time is a good time to share it, it would be Milling Week.

So it's the Ravnica Prerelease, my second Prerelease ever. My friend and I are wowed at the amount of mill in the new set, which certainly seems higher than other sets. We sit down to draft, each hoping to snare some neat mill cards.

My first pack is not a doozey by any means, but it does contain a Psychic Drain. Feeling as though destiny is urging me, I take it, and almost every other mill card that comes my way. By the end of the draft I have a fully blue and black deck that's loaded with mill. 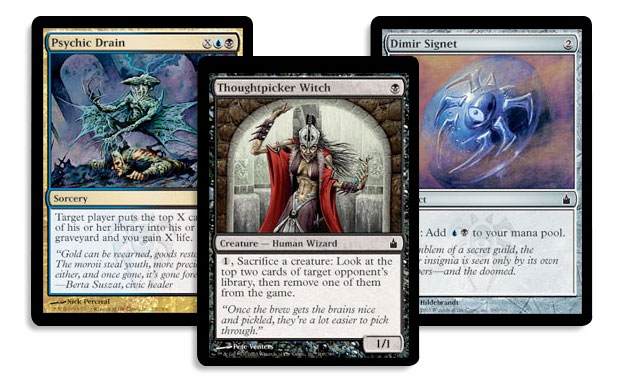 In my first game, I play out various Thoughtpicker Witches and Dimir Signets, while my opponent reveals his deck to be of the Golgari variety. Midway through the game, I've exhausted my Witches and Psychic Drains and appear to be on the ropes. I'm clinging to 4 life, but my opponent's library has been equally depleted, to 14 cards. His only creature on the board at this point is an Elves of Deep Shadow. 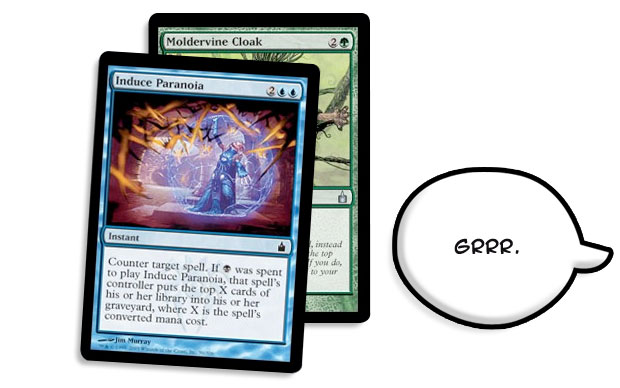 He draws his card for the turn and pumps a fist. "Game over," he says, exasperated at the fight a mere mill deck had put up, as he casts Moldervine Cloak.

I grin and show him an Induce Paranoia, with the

payment. His smile darkens as he mills himself for three and bins the Cloak. He smacks me down to 3 with the Elf.

I do nothing of consequence on my turn, and on his turn he dredges Moldervine Cloak to his hand (leaving him with 8 cards left). He casts the Cloak again. I show him another Induce Paranoia, again with

. This time his smile is downright evil. "OK," he mutters, milling three cards, and hits me to 2. 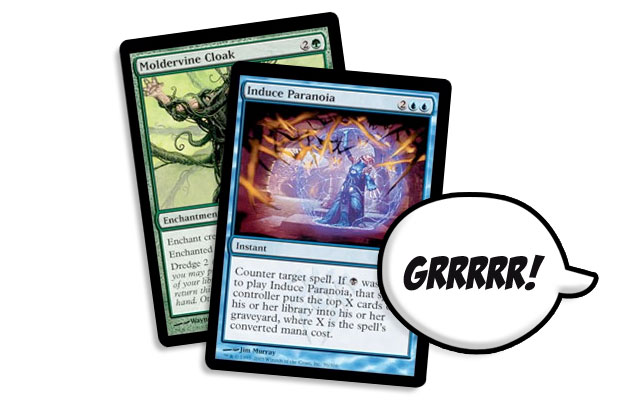 Despite my heroics, I'm now playing from the top of my deck, having spent the last of my hand. I draw ... Surveilling Sprite, who can block! I cast it and pass.

He dredges Moldervine Cloak again, leaving him with three cards in his library. "No counterspell this time!" he says happily. In what turns out to be his undoing, my opponent opts to Darkblast my Sprite first, before casting the Cloak.

My opponent slams the Cloak down with authority, caught up in finally sticking it onto the board, and I meekly flip over the third Induce Paranoia, which I had topdecked. The look on his face is so priceless; it could have been a great work of art. He wordlessly mills himself for three, emptying his library, and hits me to a single life point. 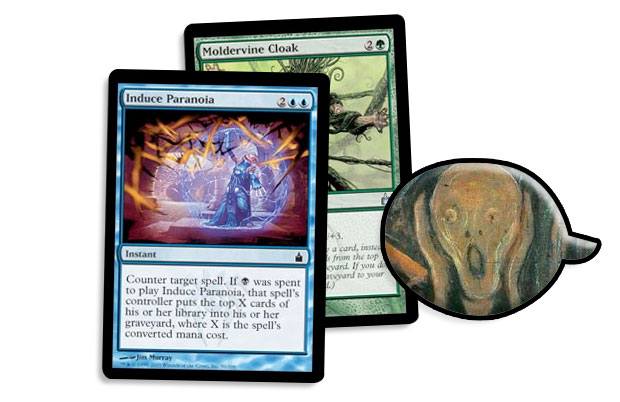 On his next turn, he can't draw and loses.

I think my friend (who was watching) actually busted a gut watching this unfold. The humor obviously lies in the fact that we were probably the only players to come into Ravnica primarily for the mill, and thus no one else but me would have picked (and played!) three Induce Paranoias.

Noel Gets Back to His Job

But I strongly digress. My duties as head mad scientist, while occasionally extending to entertaining column topics like the above, definitely include a deck list or three.

It's a good thing I haven't made any mill decks in the past six months. I was saving them all for today, of course! Like the one combining Nemesis of Reason and Lord of Extinction. Or the reader-submitted Hedron Crab + New Frontiers = Synergy Galore deck list. Or the Leveler + Mirror of Fate (with special guest Thought Lash) deck (which is a kind of milling, even if it's directed at myself).

Okay, so I guess I've already built up a monopoly of mill decks (of sorts.) And if you like reading about kooky mill decks, check those decks out. But there's always some underappreciated cards lying around that haven't gotten any love, and by Circu, some of them involve milling! 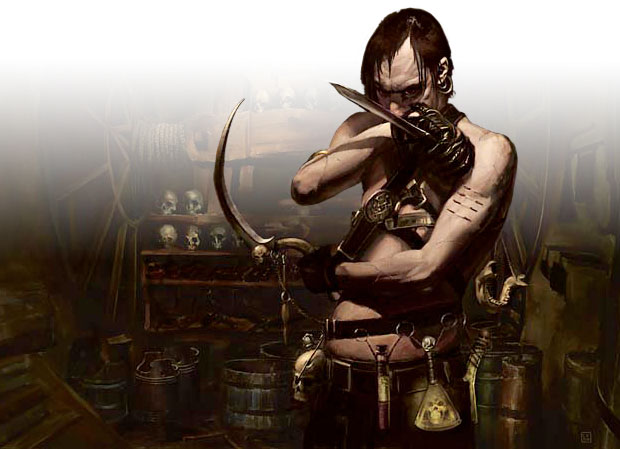 Because of my love for the Ravnica millers, I'm going to talk about one that many simply don't remember. That would of course be Circu, the lonely lobotomist of Dimir. Circu tags on an singular extra mill whenever you cast a blue or black spell, meaning of course that a blue and black spell will exile two cards. Of all the ways I've seen Circu used, I don't think I've ever seen him as the main win condition in a deck.

I'm going to attempt to do just that, by combining Circu, Dimir Lobotomist with a very similar card that was more recently printed: Grimoire Thief. Like the Lobotomist, Grimoire Thief mills whenever an action is performed (in this case, whenever it becomes tapped.) It also has a similar way of slowing your opponent's play. While Circu outright prevents copies of the exiled cards from being cast, Grimoire Thief can sacrifice itself to counter a spell with the same name as one it's milled.

Since Circu is bound to be the target of kill spells anyway, let's add a recursion angle to this deck. Hmm, blue and black spells, neat rare creatures ... how about Cemetery Puca? Sacrifice a Grimoire Thief to counter something, and the Puca can become another Thief just like that. I could use Drowner of Secrets to tap down the Thief on purpose, but with Circu in the mix I'll instead use the dual-colored Memory Sluice.

The rest of the deck uses some of the blue and black control cards printed in recent times, solidifying this deck as a straightforward update of a Circu deck. I think I've said before that sometimes straightforward thinking can lead in an unexpected direction, and this deck is a prime example.

Jest of the Decade 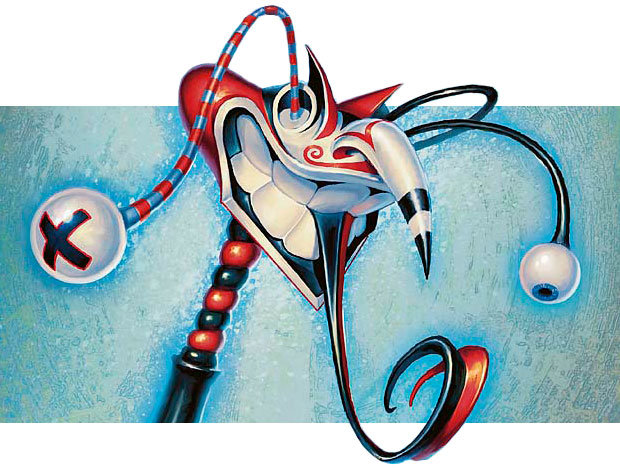 About two months ago, I received a very cool email from a couple of readers named Joe Giallo and Sang-June Kim. They had let me know of their favorite casual list, which contains many old combos but puts a new spin on them. Here's their original (and non-milling-related) list:

4 Fabricate 3 Advice from the Fae 4 Ponder

3 Booby Trap 3 Advice from the Fae

As the duo wrote, "The deck works around discovering the top card of your opponent's library as efficiently as possible, using Master Transmuter to bounce in the Booby Trap during your opponent's upkeep before they draw a card, and then blasting them for 10 damage!"

This is very cool to me. Bouncing in a Booby Trap via Master Transmuter is a new spin on an old casual archetype. However, I was inspired by this idea and looked for various ways to incorporate milling into it. What artifacts both mill and interact with Master Transmuter?

Well, Jester's Scepter, for one. A bounce and replay of a single Scepter can net up to ten cards. Crumbling Sanctuary sure costs a ton at five mana, but imagine that your opponent's life total is well out of reach that he or she won't be harmed by a Booby Trap explosion. Use the Master to pop in a Crumbling Sanctuary, and 10 damage will become ten milled cards. Grinding Station untaps whenever an artifact hits the battlefield, which, thanks to the Transmuter, should be often. With your various artifact lands and Puppet Conjurers, you should have enough fodder to sacrifice to the Station anyway.

Thanks to Joe and Sang June for delivering this neat concept to me! Here's my mill-ified version of Booby Bamboozlement.

This deck looks built out of spare parts, but when you get Master Transmuter + Jester's Scepter going, the milling should commence quickly. Even if you don't have a steady supply of artifacts for the Grinding Station, an extra three here and there gets the job done faster.

Uba Mask is another great card to bounce on your opponent's turn with Master Transmuter. Let your opponent exile a card during his or her draw step, and then bounce the Mask to your hand (popping something else onto the battlefield if you want.) This removes your opponent's ability to cast the exiled card at all, unless it's an instant—even when Uba Mask comes back, the game treats it as a fresh Uba Mask, so that card is gone forever.

That's all for today, folks, and normally I'd end the column here. However, it seems fair to remind anyone wishing to participate in the Planeswalker Contest should get their decks in my email account by midnight tomorrow, Friday, January 15. If you are new to this contest, check out the archive to learn what's going on. I've received a lot of great stuff so far, but even if you've waited until the last moment, your work will still be appreciated.

Thanks, and we'll see you all next week. I'll have a Worldwake preview card to show off, and it's pretty nuts! (Dun dun dun ....)