ello all, and welcome back to the Lab! This week is a glorious theme week, centered upon the plane most in the spotlight these days. Mirrodin has now had five sets dedicated to it, with a sixth on the horizon. As such, it's important to examine the fun tidings contained in each!

Since its Mirrodin Week after all, I'll share some fond memories I have of the original Mirrodin block, way back in the fall of 2003. Back then my primary fellow planeswalker was my Magical buddy Wes. (Happily, we still remain close Magical buddies.) Coming off of the heels of Onslaught block (perhaps my favorite block), which was filled with tribal, morph-y, Dragon-y goodness, we were both floored when the upcoming set's major theme was revealed to be artifacts. 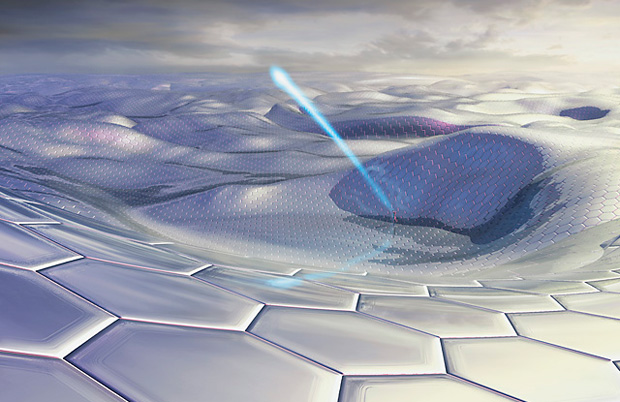 Of the four available theme decks, we acquired two: Wicked Big (filled with green monsters that were, well...) and Sacrificial Bam (which got a great nostalgic remembrance as Monday's Daily Deck). Wicked Big certainly beat down righteously, but Sac Bam was in my view the more intriguing deck. It was a red-black Johnny deck, filled with interlocking pieces and sacrificial strategy.

Looking back, Mirrodin is a pretty significant turning point for Magic as a game. Firstly, it was the first non–core set to introduce the modern card face. (The true beginning of this change occurred the summer before in Eighth Edition.) Secondly, Mirrodin introduced Equipment to the game. Seven and a half years later, the subtype is a resounding success. I remember completely falling for the concept of weapons that just fell off dead creatures, clattering to the battlefield, with potential to be once again picked up and used. Wes and I both fixated on "pet" Equipment of sorts. Sword of Kaldra was the apple of his eye, while I was drawn to the bomby Worldslayer. I still submit it's the coolest looking sword in the game, although the new Swords of recent sets have certainly captured my attention.

Darksteel came along, and with it another mainstay don't-call-it-a-keyword: indestructible. As seen on flagship beatstick Darksteel Colossus, it was bizarre and amazing to first behold. One of my personal favorite themes encased in Darksteel were the Pulses, the rare cycle of the set. Each Pulse granted a welcome effect, but the real hook was its quasi-buyback for zero. I was always looking for loopholes to get my Pulses back in my hand. My favorite was using Forbidden Orchard (yep, this was a year later) to amp my opponent's creature total, rendering my Pulse of the Tangle repeatable.

Fifth Dawn was the final set in the original Mirrodin block. To me, it was a masterstroke to make sunburst this set's miniature theme, since artifacts were colorless by definition, and thus playable in all five colors. Another mini-theme in this set was scry, which became an instantly classic mechanic. It was the first exclusive set mechanic to crack a core set (as seen on new flagship card Foresee, although since I'm a red player I usually think of Magma Jet first). Other notable cards from this set include the Beacon cycle (a spiritual ancestor of the Mirrodin Besieged Zeniths), Eternal Witness (one of my favorite conceptual cards), Relentless Rats (bizarre and, later on, fun to Thrumming Stone), and Vedalken Orrery (now known as Leyline of Anticipation. Bet you all anticipated that).

I'm sure you're all wondering when I'm going to get around to building decks today. Not to worry any longer: that begins now. For each of the three sets in the original Mirrodin block, I'll build a deck around one of its wacky rares.

Let's start off with Vedalken Archmage. Once thought of as the bizarro Verduran Enchantress, this Archmage is brilliant in that it draws you a card for each artifact you cast. Obviously, this is great in any artifact-heavy deck. 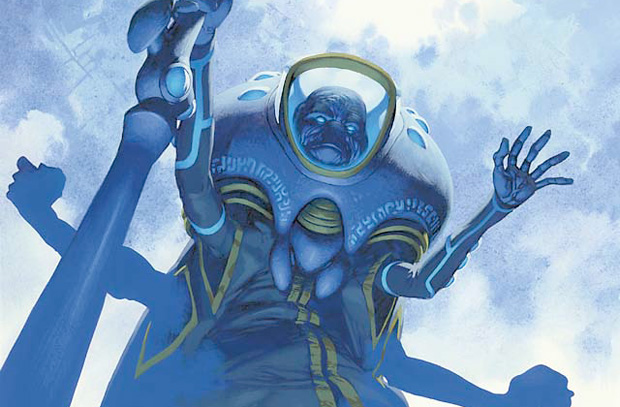 You know what would be fun, though? If all my artifacts cost nothing to cast! A Memnite would net a card! Potentially, this could escalate on a rapid scale. Let's make things even cooler, though. What if my artifacts themselves drew me cards? You know, like Ichor Wellspring, or Prophetic Prism, or Kaleidostone, or Elsewhere Flask, or Tsabo's Web? Let's just go with all of them.

They all cost two mana a piece, though, which is kind of a pain. I like pain more than most, but turning it into pleasure is mostly preferable. Enter Semblance Anvil. 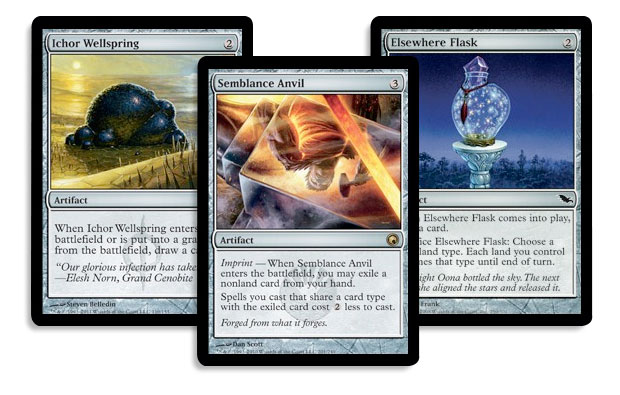 Whoa. I just connected the dots. Now all my two-cost artifacts that draw are actually free. Just imprint any artifact on the Anvil and go to town. The resulting effect is similar to a Fluctuator in a massive cycling deck. Useless artifact after useless artifact will hit the board, drawing into more useless artifacts. And with an Archmage out, you draw twice the cards.

Now where I am going with this? Right now I'm stuck on getting a bunch of silly artifacts out, while my deck is thinned to the point of millage. There are various ways to connect this to victory. I'll go with a sacrifice outlet, getting all these Anviled artifacts into my graveyard. I'll go with Grinding Station. So the game plan is to sacrifice all these artifacts one at a time to Grinding Station (milling your opponent for three each time) and having it untap each time also. And if you run out of fodder, Frantic Salvage is the amazing final nail in the coffin. Put all your sacrificed artifacts back on top, and draw a card to start the process all over. Your back-up plan is a terminal Brain Freeze, using all the spells you cast this turn to storm to ultimate millage.

Take a gander at Synod Artificer. This powerful Vedalken has control over the tapping and untapping of various artifacts. Naturally, I seek to go infinite with this guy. Specifically, with the untap ability.

I'll add some mana-accelerating artifacts, such as Worn Powerstone or Everflowing Chalice. The first goal is to get two Chalices out, along with a Magewright's Stone. The latter allows me to untap the Artificer for a low cost. 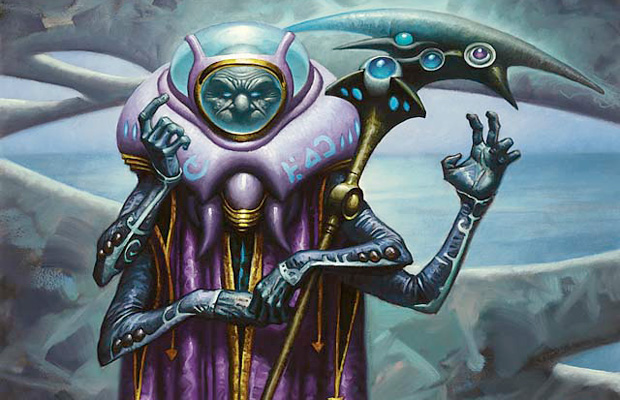 In the early game, try to ramp up the counters on your Chalices. Proliferate can help this goal, so I went with Steady Progress. Once they have three each, tap the Chalices for six mana. Use two of that to untap them with the Artificer. Tap them again for six more (ten total). Use one to untap the Artificer with the Magewright's Stone (nine left). Use three of that now with that Artificer to untap all three of those artifacts (six left). Tap the Chalices for six more... and as you can see, this goes on forever. Blow that into a giant Blue Sun's Zenith, targeting your opponent. The Zenith's good for you as well if you don't have the combo out yet.

I added some tap creatures for the Stone to trick around with, such as Enclave Cryptologist and Disruptive Pitmage. Since this is a mono-blue deck, I went with some tricky instants. Ravnica block stalwarts Remand and Repeal fit the bill.

Fifth Dawn has a ton of weird crazy artifacts, but none more weird than Possessed Portal. Talk about pressing pause. No more draws for anyone... ever. If no one has a way to deal with the Portal already, they won't find one. And the Portal also slowly sucks the universe into it, via either a global discarding or sacrificing effect. 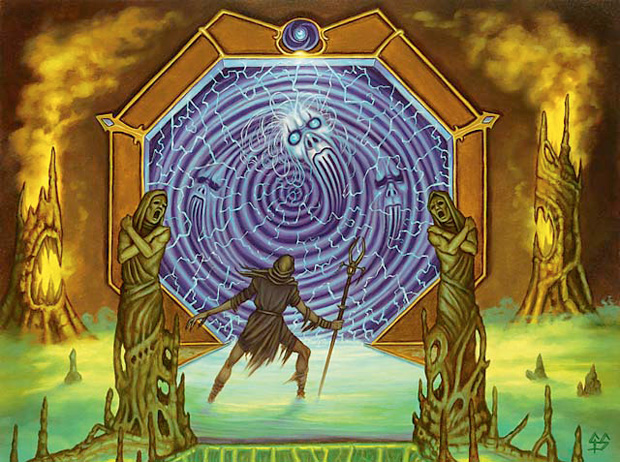 How do I build around the Portal? One good way would be to keep the card flow from your library coming through non-drawing sources. What am I talking about? Sources such as Telling Time or Sea Gate Oracle can just put cards into your hand, rather than having you actually "draw" them. But the most repeatable of these is the totally, totally forgotten rare, Tomorrow, Azami's Familiar. The legendary Spirit offers an alternate replacement effect that dodges the Portal, giving you not only a draw but a mini-Impulse every turn.

Okay, but we still need to get around the discard or sacrifice. Enter Awakening Zone. This card can help you ramp into the Portal in the early game, and post Portal you can feed the Eldrazi Spawn to it.

The rest of the deck is mana acceleration, bounce (in the form of long-lost stalwart Temporal Adept, just because), and Red Sun's Zenith as a win condition. It shuffles back into the library, for Tomorrow, Azami's Familiar, Telling Time, or the Oracle to find. Since the Portal is frustrating your opponent the whole time, you'll have time to find the Zenith again. I added Rampaging Baloths as a fun singleton that works well with the land fetchers and is a fine secondary win condition.